A City Council committee heard three hours of testimony last night from residents and clergy demanding, cajoling and imploring the developer of Harbor Point to use some of his property tax breaks to improve conditions at a nearby housing project.

But the subject of those calls skipped the session and has so far refused “to sign any benefits agreement with the community,” said Councilman Carl Stokes, who convened the hearing.

“We issued an invitation to Michael Beatty to come to the hearing. He did not respond. He is apparently mad at me and said he doesn’t have the money to do anything for Perkins Homes,” Stokes told The Brew after the hearing.

At issue last night were not these financing bonds, which will be the subject of a hearing by Stokes’ committee next week, but the earlier award of $88 million in “ES” (Enterprise Zone) tax credits for Harbor Point.

Stokes infuriated the developer – and blindsided the Rawlings-Blake administration – by introducing a resolution calling on the Beatty group to “make good on their representations that Harbor Point will benefit the nearby pockets of poverty” that Stokes said enabled the group to win $88 million in EZ tax breaks.

The resolution calls on Harbor Point to commit at least $15.6 million to the Perkins Homes community from its projected tax savings.

Nobody from the Beatty team appeared at the hearing. The developer and his representatives at Kearney O’Doherty (KO) Public Affairs did not respond to emailed questions about the resolution submitted by The Brew.

“We Need This Money”

More than 100 people, many from the Perkins Homes, applauded loudly last night when clergy and residents asked the absent developer to give back to the community. 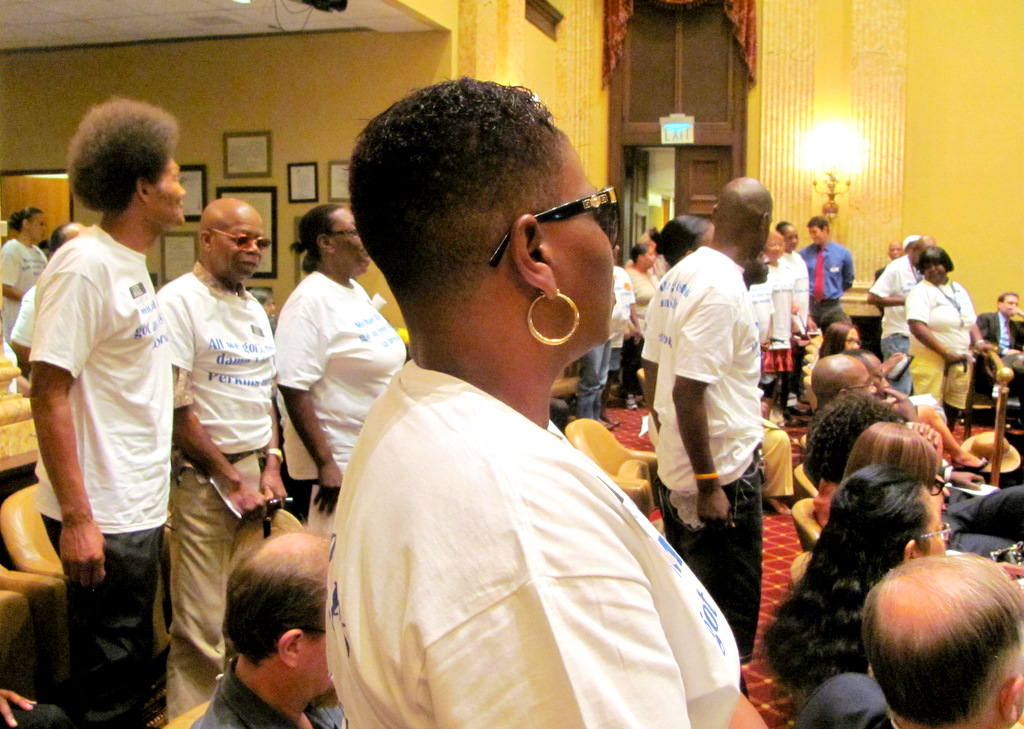 Donnetter Herndon (foreground) and other Perkins Homes residents stand up during the hearing. (Photo by Mark Reutter)

“We need this money for the kids,” said Donnetter Herndon, who has lived at Perkins Homes since 1992.

“And we need money for these old houses. Right now there are rat holes bigger than sewer holes, and mice are playing on my stove.”

Other residents said the complex, opened in 1947, lacked adequate playgrounds, a library or outreach programs such as adult education. A youth recreation center was closed a decade ago.

Harbor Point was removed last spring from the city’s map of “EZ” zones (required to be redrawn every 10 years) and then placed back on the map after Beatty protested.

Reapplying for the tax breaks, Beatty and the Baltimore Development Corp. (BDC) specifically cited Harbor Point’s potential “to improve the communities in and around the [EZ] zone” to justify the tax credits.

The text of the application reads as follows:

“When one considers southeast Baltimore, particularly the area immediately north of Harbor East, one can observe high poverty rates, elevated joblessness and ongoing lack of investment momentum. The continued expansion of Harbor East/Harbor Point is critical to the well-being of these communities.” 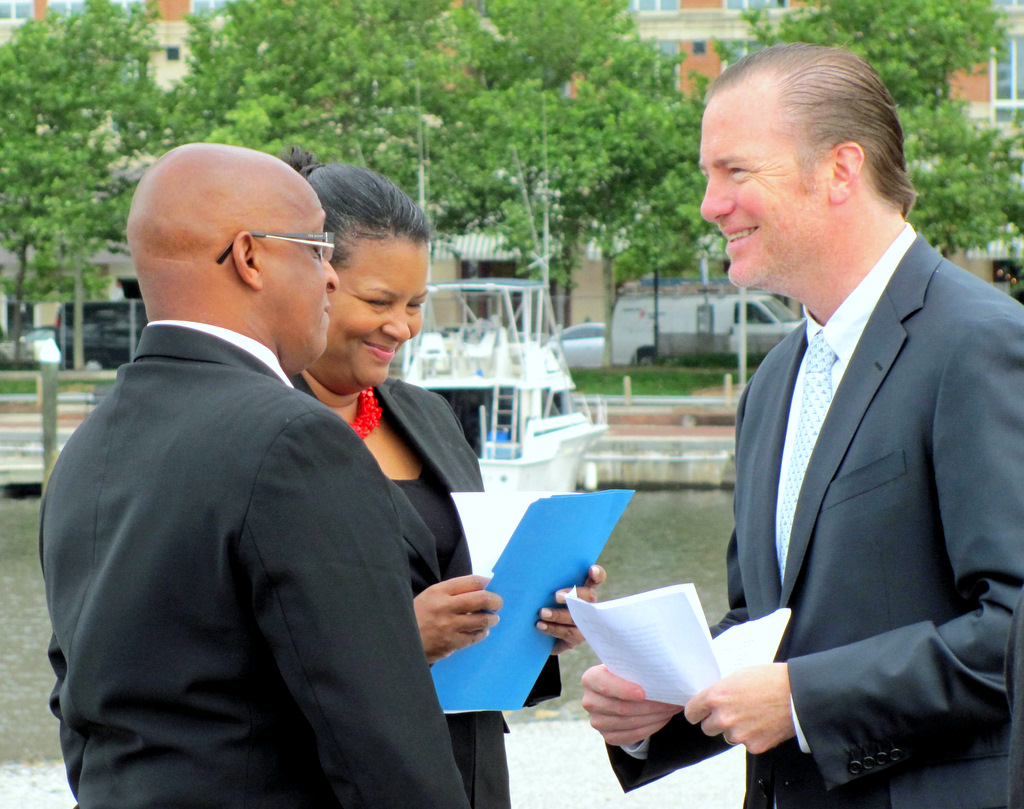 Much of last night’s testimony included a critique of the BDC, which stood accused of being a pawn for developers who don’t “give back” to the community. Several said the quasi-public city agency should be “dismantled.”

“Once again, a developer has come to us with another sweetheart deal for Baltimore,” said Bishop Douglas Miles, of the BUILD community group. “Mr. Beatty, the BDC and the Council should be ashamed for gerrymandering the enterprise zones.”

Stokes emphasized that he did not oppose the project, which will add 2 million square feet of office and apartment space at the now-vacant site. In fact, Stokes said, he “very much” supported the plan “as long as we – we – are part of it.”

“A Matter of Class and Race”

Noting that Under Armour made concessions to the Locust Point community as part of its successful $35 million tax-financing break from the city last year, Stokes said, “It is always a matter of class and race in the city of Baltimore.”

Hathaway and activist Kim Trueheart noted that they have each met with Beatty, but that no resolution regarding Perkins Homes came out of their talks.

Rev. S. Todd Yeary, Mayor Stephanie Rawlings-Blake’s pastor, called on residents and clergy to continue to try to reach out to Beatty, who has the full support of the mayor.

At a recent press conference flanked by the mayor and City Council President Bernard C. “Jack” Young, Beatty pledged to use union labor and to set aside 27% of the project for minority contractors and 10% to women-owned businesses. He was .

Last night, Brenda McKenzie, president of the BDC, pledged to facilitate discussions with Beatty over Perkins Homes, but voiced strong opposition to Stokes’ resolution calling for a specific dollar commitment by the developer. 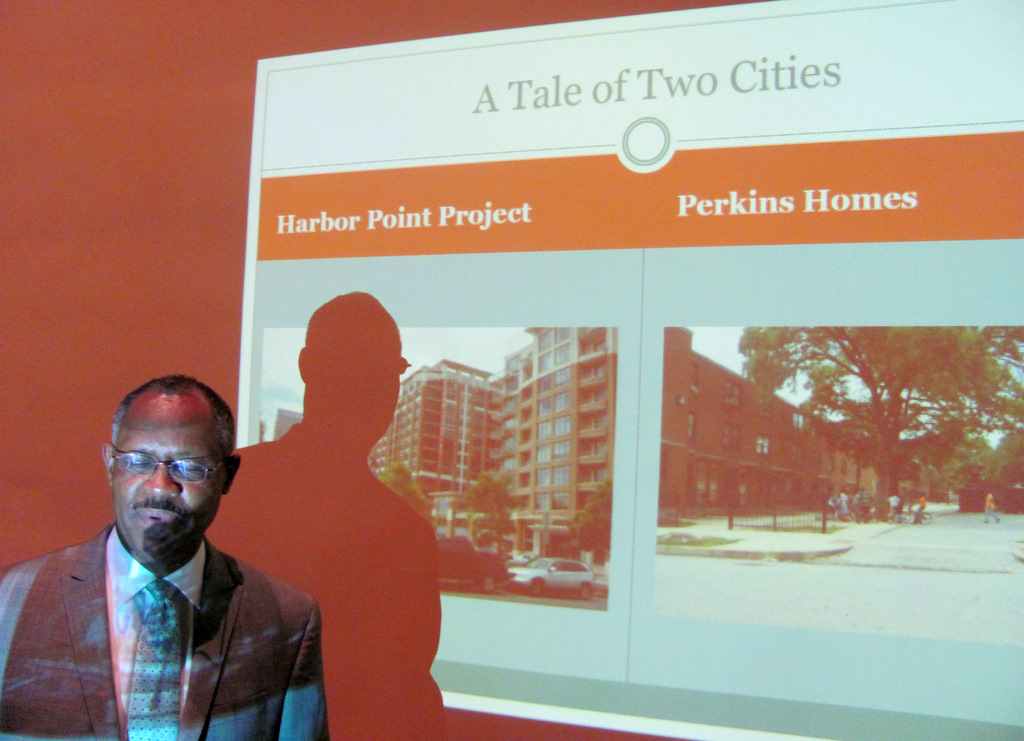 Councilman Carl Stokes described the disparity between Harbor Point and Perkins Homes as “a tale of two cities” when he introduced his Perkins Homes resolution last month. (Photo by Mark Reutter)