Supporters and opponents of the $107 million TIF tax break for Harbor Point, a luxury waterfront development on the site of a Superfund “brownfield,” are preparing for a contentious meeting tomorrow (Wednesday) before a City Council committee.

The Taxation, Finance and Economic Development Committee will hold the public hearing at 5 p.m. on the fourth floor of City Hall regarding three bills that would establish a special taxing district for Harbor Point and authorize the sale of up to $122 million in bonds to support $107 million in public improvements on the site.

The project has become the latest flash point in the ongoing debate over the use of tax credits that may create new jobs but also drain revenues from the city’s cash-strapped general fund.

The Fair Development Campaign, a coalition of unions representing hotel workers and others, plans a 4 p.m. demonstration against the legislation in front of City Hall.

“The award of taxpayer funds to wealthy developers in the hope that money will trickle down has failed,” said Michael Fox, an organizer for the group. “The Harbor Point TIF is more of the same.” 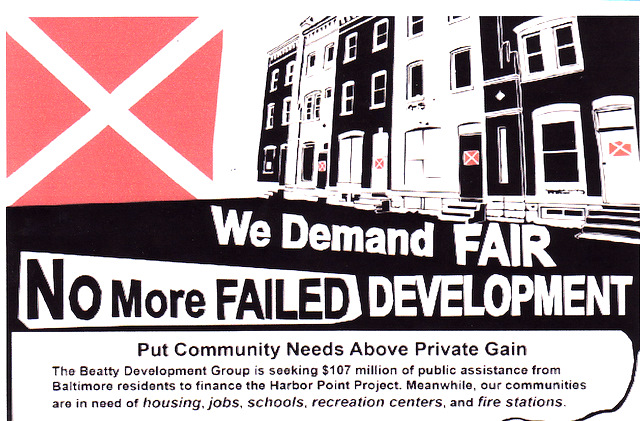 Opponents of the Harbor Place’s tax break plan to rally in front of City Hall at 4 p.m. Wednesday.

Meanwhile, the developer, Michael Beatty, has been active drumming up support in City Hall and trying to quell potential opposition in the downtown business community.

A few days ago, Beatty and his public relations team addressed board members of the Downtown Partnership, some of whom have privately expressed concerns about Harbor Point “sucking” jobs and businesses away from a struggling downtown.

The project, which would add 3 million square feet of office, retail and apartment space to a district 1.5 miles from downtown, has the strong support Mayor Stephanie Rawlings-Blake and City Council President Bernard C. “Jack” Young.

Tomorrow the Board of Estimates, headed by Young and Blake, is expected to endorse the Harbor Point tax-break bills as part of the panel’s routine agenda.

The project has also been endorsed by the Baltimore Building and Construction Trades Council and Maryland-Washington Minority Contractors’ Association, who were swayed by projections that the 12-year build-out could create about 7,000 construction jobs.

The taxation committee chairman, Carl Stokes, has expressed skepticism over the amount and uses of the $107 million TIF tax break, saying the city will be paying for too many costs that should be shouldered by the developer.

“In the counties [around Baltimore], it is generally almost always the developer who does the infrastructure work,” Stokes said. “Here we are providing public funds for private land – private land that won’t generate tax revenues for the city for many, many years.”

Stokes said in an interview today that he plans to closely question the Baltimore Development Corporation (BDC ) about the city’s “but for” test that the project would not be built without taxpayer support.

He will also hear testimony tomorrow from the public and, hopefully, he said, from civic leaders who have been privately critical of the tax break.

“Last week I had t-shirts. Tomorrow I will need white shirts and suits,” Stokes said, referring to last week’s protest by Perkins Home residents, who wore t-shirts to a City Council hearing saying: “Michael Beatty got an $88 million tax break. All we got is this damn T-shirt.”

The residents were protesting the use of demographic data from the public housing project to support a $88 million Enterprise Zone Tax Credit to Harbor Point – separate from the $107 million TIF under consideration at tomorrow’s hearing – that is supposed to be earmarked for low-income communities.