Did we doze off in this heat and wake up in the 1950s? Or did the Baltimore Sun switch urls with The Onion when we weren’t looking?

Is that really Mayor Stephanie Rawlings-Blake posing in a strapless black $638 Janique gown, $730 necklace and come-hither look in the newswebsite-of record?

Have she and the other women in positions of power – posing in ball-gowns and bridal garb in the Sun Magazine’s “50 Women to Watch in Baltimore” – really, umm, thought this through?

And look at Catherine “Katie” Curran O’Malley, a District Court judge and the wife of the governor, in a black $2,600 Victor Rossi, with Kate Spade heels from Sassanova that price out at $255.

So what’s the message for young women aspiring to be “worth watching”? 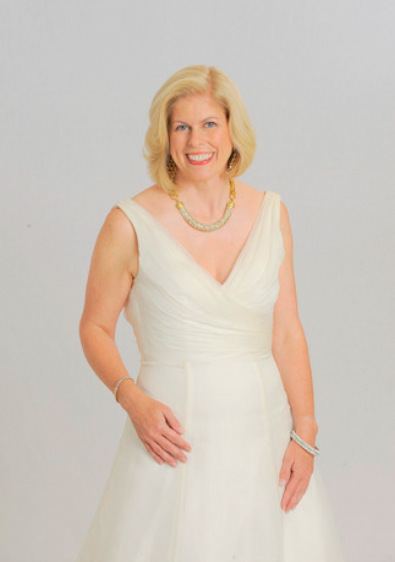 Build up a great resume, but also a great figure?

You’ll be judged for your accomplishments, but also how well you fill out a skin-tight sheath?

Do good in the world, but also do well because you’re going to have to buy $2,600 ball gowns?

Parents trying to protect their girls from society’s “princess” phenomenon will sigh about this spread.

Perhaps, to demonstrate equity, The Sun Magazine could come out with a “50 Men to Watch in Baltimore” (not to be confused with Police Commissioner Batts’ “Most Wanted Public Enemies List.”)

For a male version to be comparable, it would have to show, say, Greater Baltimore Committee’s Donald Fry in a tuxedo, hand on hip, with a smouldering pout.

Actually, the tux wouldn’t do it. There’s an inherent imbalance here, since men’s formal-wear is pretty forgiving. So the truly comparable shot would be H&S baker/developer John Paterakis in form-fitting Lycra.

It’s tricky to deconstruct all this in a world of Kardashians, Real Housewives, and inaugural ball gown fetishizing. Still, you’d think women coming up against persistent societal sexism would take care not to undermine themselves. 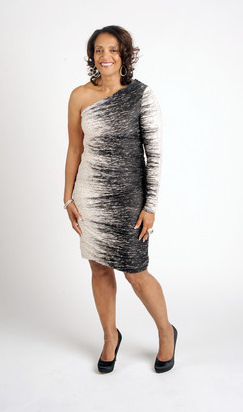 We’re not sure who’s getting the craziest advice here. The editors on Calvert Street who ordered up the photo shoot (was it mandated from Chicago?) – or the public officials who agreed to be styled and gussied up for this A-list “Glimpsed.” (Ryan, did you sign off on this?)

In its accompanying text, The Sun includes bios and Q&As of these “most intriguing, powerful and memorable personalities,” gliding past the downer details, especially regarding pols and ex-pols.

Former Mayor Sheila Dixon is described as “she of the, ahem, indictment. . .  forced from office in 2010 for a misdemeanor.”

Then it’s on to the ex-mayor’s dream job (“ambassador to an African country”), favorite song of the moment (Justin Timberlake’s “Suit and Tie”) and favorite relaxation snack (“popcorn and a glass of wine.”)

It must not have seemed like the right venue (a newspaper, that is) to describe the fur coat from her developer boyfriend after he got a big tax break, or the specifics about those gift cards intended for the poor. 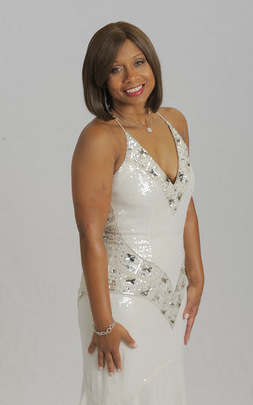 Readers also are given a mini-profile of lobbyist Lisa Harris Jones (she of the Las-Vegas-wedding-officiated-by-Mayor-Rawlings-Blake fame) posed in a white-sequined, $2,500 gown.

Her life is depicted as a raised-by-a-single mom, up-by-the-bootstraps tale – only her boots, in this spread, happen to be $245 Badgley Mischka heels.

To be fair, most of the 50 women in the feature opted for a more professional look, like Baltimore Development Corporation CEO Brenda McKenzie, photographed in work attire at her desk with the city skyline in the background.

The executive director of Light House, an Annapolis shelter and food kitchen, is shown next to cans of food for clients.

But in choosing to be shown in the (presumably) borrowed gowns, the politicians and the lobbyist are part of a subset of about a dozen who went for glitz. (The others were television personalities, such as TV anchorwman Mary Beth Marsden, and radio types, like 92Q on-air personality DJ Angel Baby.)

Lest anyone miss the beauty-pageant leitmotif, a real-life tiara-wearing pageant queen rounds out the parade of gown-wearers.

She’s “Maryland Mrs. America 2013” Heather Ziehl, who will be vying for the crown at the national competition in Tucson next month.

Ziehl and all the other women featured have interesting life stories and accomplishments. They didn’t need sequins to shine.