Saying Baltimore has repeatedly failed to stop raw sewage from going into local streams and the harbor, an environmental watchdog group filed a motion today to intervene in a 2002 consent decree between the city and federal regulators.

Blue Water Baltimore asked a federal judge to allow it to represent citizens who “have suffered and will continue to suffer adverse impacts from the city’s unlawful sewage discharges.”

The motion follows a report in The Brew that the city Department of Public Works is currently involved in quiet negotiations with the Environmental Protection Agency (EPA) to modify the terms of the 2002 agreement to end water pollution.

EPA agreed in principle to push back completion of costly upgrades to Baltimore’s sewer system from 2016 to 2019 or beyond, according to a top city official.

The watchdog group says it wants to “give citizens a voice in the revision process” before it becomes finalized and public input is restricted to a narrow window of public comment before the court.

“While the city has made some progress, much more remains to be done as raw sewage pollution continues to harm our waterways and public health,” said Halle Van der Gaag, Blue Water’s executive director.

“We believe Blue Water Baltimore’s technical expertise and experience working closely with local communities is critical to effectively addressing this issue,” she added.

A spokesman for the city called today’s motion “premature,” signaling that the city will oppose letting the group intervene as plaintiffs alongside the EPA and Maryland Department of the Environment.

Jeffrey Raymond, chief of communications for DPW, issued this statement to The Brew:

“The Baltimore City Department of Public Works is committed to fulfilling its obligations under the 2002 Consent Decree. We have met every requirement and deadline under this process. A revision of the Consent Decree is not yet before the court, and we consider the intervention referenced today to be premature.” 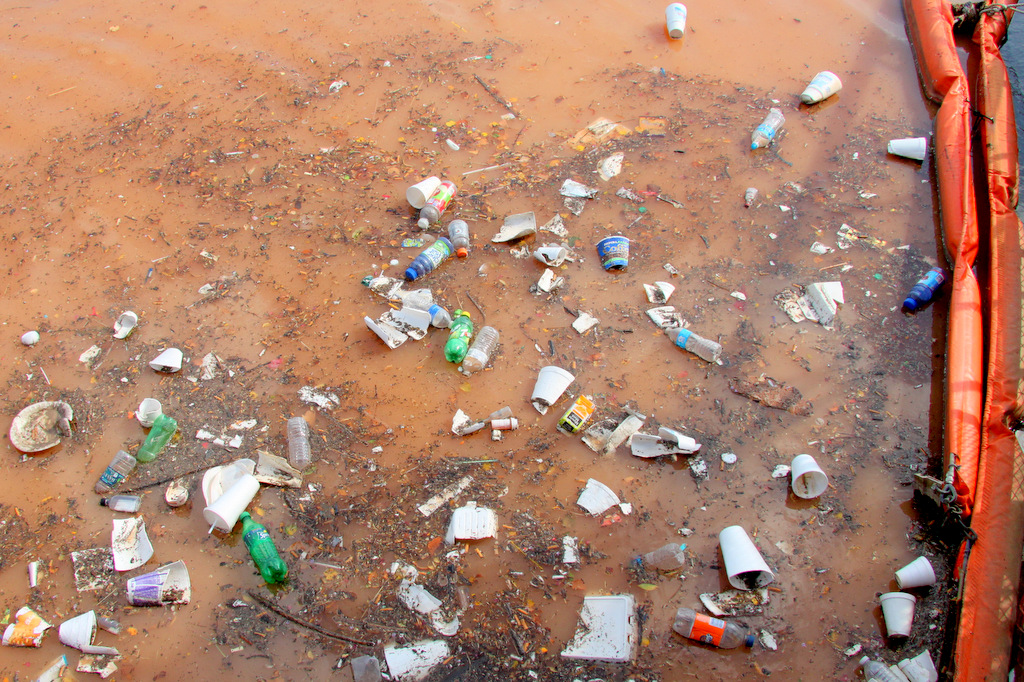 Trash, as well as sewage, sweeps into the harbor via the Harris Creek outfall. (7/30/12 photo by Fern Shen)

The city, EPA and MDE will have until August 19 to respond to the motion. If any of them object to making the environmental group a party to the case, a hearing would be held in U.S. District Court.

At the same time, Motz ruled that citizen groups may not sue a polluter if federal or state regulators are already involved in the case. The ruling would appear to preclude environmentalists from directly suing the city for its alleged sewage overflows.

City officials argue that DPW has followed the guidelines of the 2002 consent decree, which the city entered under the threat of heavy fines by the EPA for violating the Clean Water Act.

So far, most of the work has involved analysis and the design of upgrades to the system. The construction phase – involving hundreds of miles of new city sewer lines and about $1 billion in expenditures – is scheduled to start in earnest later this year.

But even while the city planned the costly upgrades, it failed to adequately address “ongoing and egregious sewage contamination” from the existing stormwater system, Blue Water charged in court papers today.

The group pinpointed a number of places, such as Stony Run in North Baltimore and parts of Canton, where raw sewage routinely flows into public streams or the harbor.

At Stony Run, continuous discharges of raw sewage flow out of a stormwater line under the University Parkway Bridge, according to Tina Meyers, the Baltimore Harbor Waterkeeper. “This happens even in dry weather,” she noted.

She said her group has documented similar problems along Jones Falls, Herring Run and Gwynns Falls in parks or recreational areas used by joggers, bicyclists, children and others.

“People are walking their dogs along creeks that are carrying raw sewage. Dogs swim in the water. So do kids. This is an unacceptable public health hazard,” she said in an interview.

The discharges (known as “Sewage Discharges of Unknown Origins,” or SDUOs) represent serious violations of the Clean Water Act. So far, the city has not been fined for the spills under the penalty clauses of the consent decree or state water permits.

Between 2010 and 2012, the city reported discharging about seven million gallons of raw sewage into local streams and the harbor. Most came during heavy rainstorms.

Meyers said the actual amount of polluted runoff greatly exceeds that number because the city does not count SDUOs or chronic leaks through the system.

Among other provisions needed under a revamped consent decree, Meyers wants the city to better notify the public of sewage spills and promptly clean up contaminated debris floating in the harbor or left along streambanks.

Rudolph S. Chow, chief of the bureau of water and wastewater, said that the city is redesigning the sewer system to deal with the chronic leaks and breaks, which he blames on the age of the system.

Decree Changes Could Save City $500 Million

He told The Brew that the EPA had tentatively agreed to accept changes in  modeling assumptions to avoid the “overdesign” of future sewer lines and wastewater treatment facilities.

Chow said these and other changes could save the city $500 million.

The city’s negotiations with EPA are part of a national pattern in which the agency – under intense pressure by conservative legislators and the U.S. Conference of Mayors – has agreed to amend its Clean Water agreements to provide cheaper solutions.

In a policy directive issued last January, Nancy Stoner, acting assistant administrator of EPA’s Office of Water, instructed regional offices to work with local governments “to clarify how the financial capability of a community will be considered when developing schedules for municipal projects necessary to meet Clean Water Act obligations.”

She added that “our on-going conversations [with cities] have been very encouraging and have helped identify several implementation issues, as well as more robust ways to present additional community-specific information within a financial capability analysis when considering a community’s ability to achieve the shared goal of clean water.” 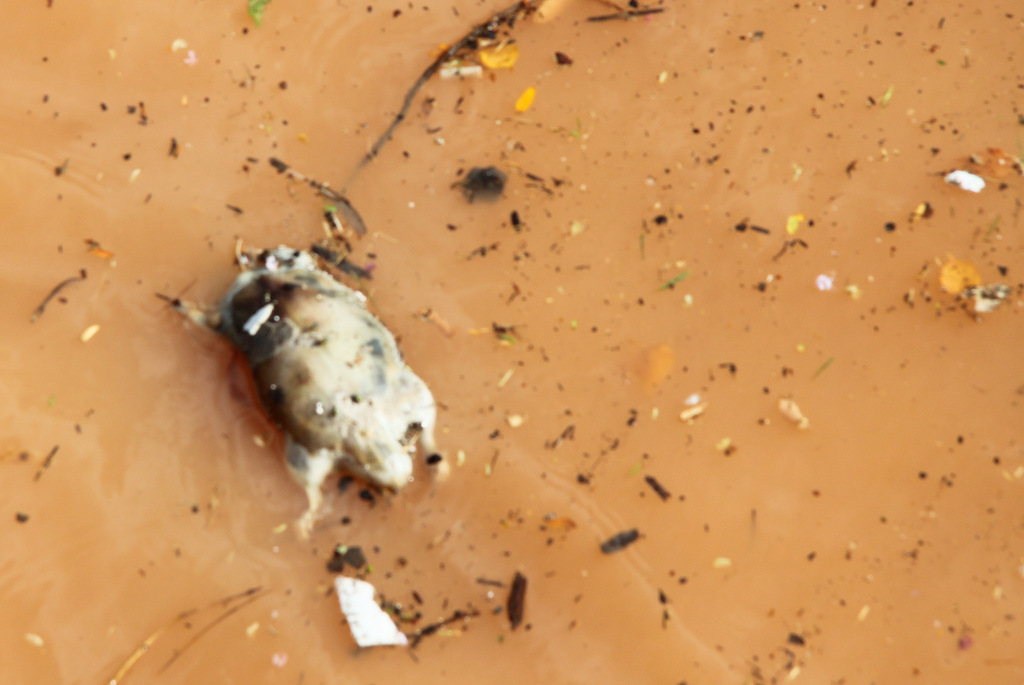 Amidst the trash at the Harris Creek outfall, a dead turtle. (7/30/12 photo by Fern Shen)