Over the last 10 years, the city has spent millions trying to clean up Gwynns Run, a tributary of Gwynns Falls that flows by the Carroll Park Golf Course.

A new sanitary pipe, three filtering ponds and an ill-fated trash-straining dam have all been tried.

But on any given day, the stream still reeks.

“Greaseballs” – solidified clumps of fat and grease – float along the sluggish current. The water is a muddy gray-blue, indicative of algae and high bacteria content.

Plumes of foam congeal along the banks, which are strewn with plastic bags and bottles, soggy chunks of Styrofoam, torn clothing and even a stray pair of sneakers hanging from a low-hanging tree branch.

City Says it is Following the Decree

It’s this kind of mess that led Blue Water Baltimore to ask a federal judge yesterday to become a party in the 2002 consent decree under which Baltimore is required to clean up its sanitary system to prevent raw sewage from flowing into streams and the harbor.

The watchdog group accuses the city of “ongoing and egregious sewage contamination” of local waterways that not only affects the well being of the harbor and Chesapeake Bay, but also poses a potential threat to human health. 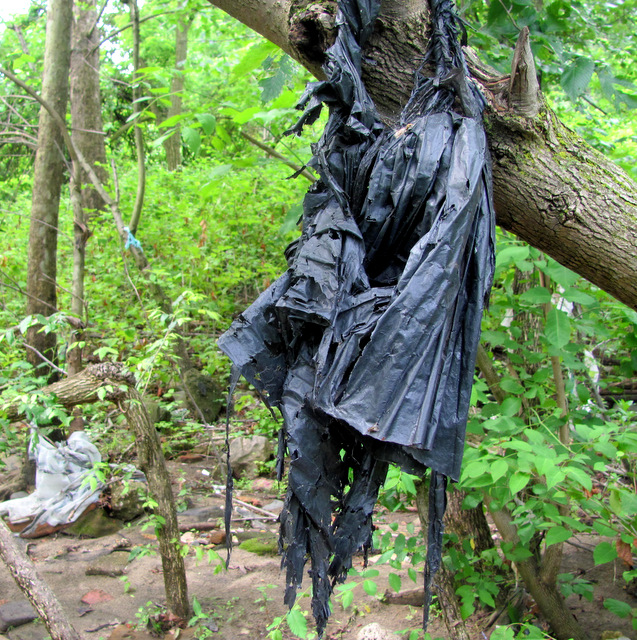 Trash along Gwynns Run mirrors the condition of the stream. (Photo by Mark Reutter)

“We have met every requirement and deadline under this process,” said spokesman Jeffrey Raymond.

In a recent report submitted to the EPA, the city has  pegged its expenditures on fixing its sewer and storm drain systems at about $500 million, with another $300 million or more of projects set for the near future.

What Lies in the Water

At issue is not the surface runoff of trash that periodically befouls the Inner Harbor and Canton waterfront.

That’s basically an aesthetic issue, which is handled in the tourist districts with floating nets and trash-collecting boats

What Blue Water Baltimore is talking about is the EPA’s requirement that the city stop untreated sewage from getting into local waterways.

It gets there through a variety of ways. The most common is the runoff from heavy rainstorms that sweep street garbage, oil and sediment down the sanitary storm lines that drain into the harbor.

But more pernicious is the discharge of actual sewage containing fecal matter, fungal spores, nitrates, trace metals and other harmful materials into storm drains due to leaks or plugs in the sewer lines (or undetected illegal connections from homes or businesses).

This sewage then goes down streams like Gwynns Run into the harbor, bypassing the Back River Wastewater Treatment Plant.

Between 1996 and 2002, the city dumped at least 110 million gallons of wastewater containing raw sewage into local streams and the harbor, the EPA charged.

To avoid stiff fines, then-Mayor Martin O’Malley entered into a consent decree pledging to cleanup the problem through a massive rebuilding of the system.

In its May 24 progress report to the EPA, the Department of Public Works expressed satisfaction that it is reconstructing the city’s sewer system properly and can meet the federal guidelines (which it is proposing to extend from 2016 to 2019 and beyond.)

The report provides an overview of what it’s been doing – and, by extension, why residential water and sewer rates in the city have been rising so rapidly (here and here).

According to the report, approximately $348 million has been spent on so-called “Paragraph 8” projects designed to reduce “SSO” (Sanitary Sewer Overflow) discharges. 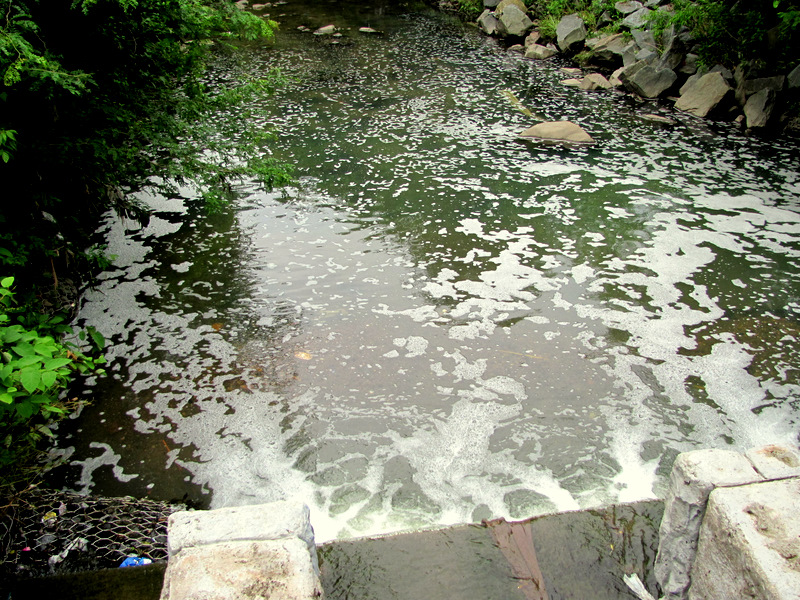 FOAMING: Gwynns Run as it passes through a trash-collecting dam system that’s no longer used. (Photo by Mark Reutter)

These projects include rehabilitating or adding 44 miles of sewer lines, increasing the capacity of the Jones Falls Pumping Station by 60%, building a new pumping station on Stony Run in North Baltimore and eliminating 60 of 62 “SSO Structures” that had diverted wastewater into local waterways during storm events.

At an additional cost of $112 million, DPW said it has inspected the city’s manholes (all 33,000 of them), inspected all 8-inch-or-larger sewers using closed-circuit television, and completed “infiltration/influx” evaluations of leaks, breakages and inflows in the system.

What’s more, $41 million has been spent, or is under contract, for “on-call” mostly emergency work on the system.

Relying on a cadre of consultants, DPW has spent millions (not specifically broken down in the report) on planning and information gathering, including updating the city’s Geographic Mapping System, performing flow-monitoring studies to calibrate hydraulic models of the system, and completing master sewershed reports.

The city is now on the cusp of spending between $250 million and $300 million on so-called “Paragraph 9” projects, including the rehabilitation of 200 miles of sewers and 8,400 manholes identified in the reports as deficient.

What’s more, the city plans to spend another $150 million to $200 million to resolve longstanding hydraulic restraints at the Back River treatment plant, which leads to wastewater overflows at Jones Falls into the harbor.

The city is asking the EPA to change the model by which the city’s new sewers will be built to incorporate a less “overdesigned” system, according to Rudolph S. Chow, chief of the water bureau.

At the same time, the city wants to extend the deadline of the consent decree from 2016 to 2019 for Phase 1, Chow said, with additional time for a yet-to-be determined Phase 2.

Seat at the Table

Blue Water Baltimore is asking for a seat at the table during the negotiations over the proposed extension.

The group also wishes to express its concern that sewage overflows are continuing on a regular basis despite all of the massive infrastructure building, said Tina Meyers, Baltimore Harbor Waterkeeper.

All of which gets back to Gwynns Run. Reducing the flow of wastewater across the city means getting a handle on this neglected stream that is festooned with “Danger – Keep Out” signs.

Based on a recent smell test, the city has a long way to go. 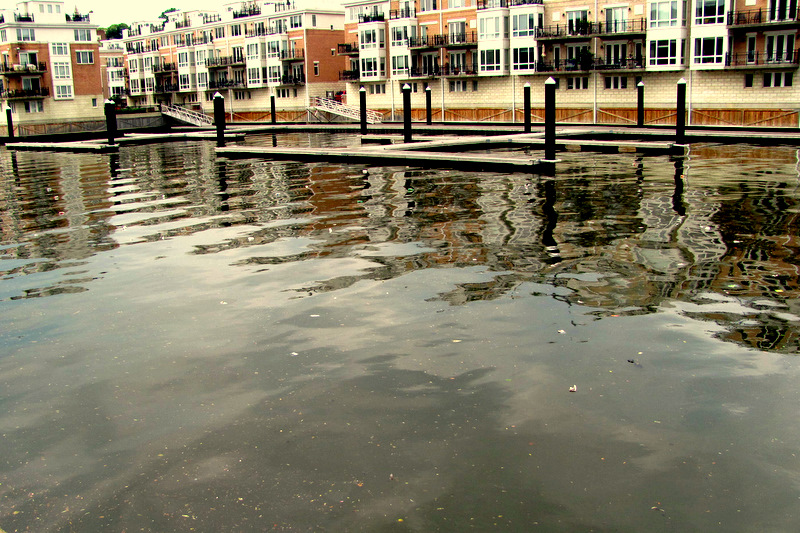