It probably won’t be enough to derail the $107 million Harbor Point TIF tax-increment financing plan up before a City Council committee tonight (the mayor has the votes to ram the legislation through, albeit with a possibly lower TIF amount).

But yesterday’s announcement that the board of the Downtown Management Authority (DMA) is against the Harbor Point TIF may mark a sea change in City Hall’s ability to engineer complex “off-the-books” tax subsidies to spur selective development in the city.

Unlike United Workers, BUILD and other groups whose rallies against developer subsidies (another is set for 4 p.m. today in front of City Hall) Mayor Stephanie Rawlings-Blake can safely ignore – the DMA carries real clout in this city.

It represents 1,200 property owners across 106 blocks of downtown, among them many generous campaign contributors to the mayor.

The DMA (not to be confused with Downtown Partnership, which has a separate board and currently supports the Harbor Point TIF) did not express “reservations” about the request by the Beatty Development Group for $107 million in city financing.

Nor did it ask for community benefit paybacks along the lines of a Baltimore clergy group.

Instead, the DMA board flat out “opposes” the TIF request in a painful slap to the mayor’s carefully-crafted media blitz to portray the Harbor Point plan as a surefire way to “grow” Baltimore and attract new residents.

“It makes little sense to fund the construction of brand new infrastructure when existing infrastructure needs assistance,” the group said in an eight-page document explaining its opposition – a document that could easily be broadened to express the status of the entire city.

Dancing in the Dark

The group argues that City Hall hasn’t a clue about whether the $107 million subsidy will result in new jobs and residents – or simply relocate jobs and residents “from a property that pays full real estate taxes” (read: downtown) “to one that does not” (read: Harbor Point).

That’s because the city, according to the DMA, has never conducted research on the consequences of the developer tax subsidies that it’s been sprinkling around the waterfront and parts of downtown for the last 20 years.

“The city must conduct significant research before it starts to pick winners and losers in the development of the office market in the city,” the DMA report says. “Decisions made without such research are potentially fraught with error.” 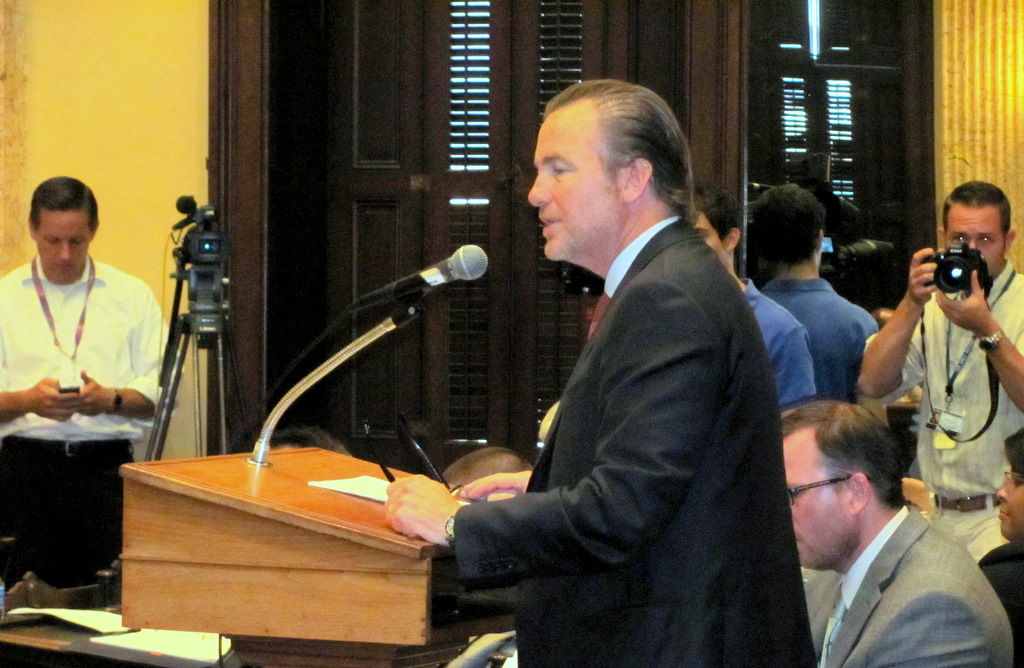 Such warnings about awarding tax breaks that are “developer driven,” rather than directed to the general welfare, are not new.

Two years ago, the Task Force on Baltimore City Public/Private Development Financing Efforts came to a similar conclusion after a nearly year-long study.

The task force was appointed by Councilman Carl Stokes, head of the Taxation, Finance and Economic Development Committee. Its recommendation for a moratorium on TIFs and PILOTs (payments in lieu of taxes) until the city had a better grip on their economic consequences was met by a swift kick in the butt from the mayor’s office.

“A moratorium on TIF or PILOT legislation would be reckless and threatens to kill job creation in the city,” a mayoral spokesman said within minutes of the public release of the recommendation in November 2011.

Thus, the award of tax subsidies to developers has continued – most prominently for the now-failed “Superblock” project on Howard Street.

Yesterday’s announcement by the DMA is the culmination of years of frustration by downtown real estate interests who watched Harbor East rise up along President Street, challenging the Inner Harbor’s supremacy with fancy apartment towers and a lavish Marriott Hotel that all pay minimal city property taxes.

Even worse, downtown has been losing prestigious corporate tenants to Harbor East, and is destined to face additional losses if the Beatty Group is able to offer below-market rents at Harbor Point as a result of generous TIF financing.

According to the DMA, the city’s granting of a 95% property tax break on Harbor East’s high-rise at 100 International Drive “led to the departure of Legg Mason from a major taxpaying property at 100 Light, as well as employer relocations from One South Street, 111 South Calvert, and the former Johns Hopkins Downtown Center.”

“The buildings left behind were, in some cases, brand new or less than 20 years old. In other cases, the buildings losing tenants have been considered strong Class A spaces with modern amenities. Employers did not move from these buildings because of outdated or obsolete office spaces, as some might claim,” the group said.

And to make the point clearer, the report notes the recent solicitation by the Beatty Group of T. Rowe Price to move out of downtown to Harbor Point.

“The owner of 100 East Pratt, the current location of T. Rowe Price and the payer of the highest commercial property taxes in the city, is faced with competing against an area that could have lopsided incentives if the TIF were approved.”

“The playing field is simply not level,” the report asserted, and the TIF legislation now before the City Council “will have significant adverse impacts” on downtown real estate values.

The DMA’s message was a blunt wake-up call to Rawlings-Blake and her new development director, Brenda McKenzie. Time will tell if the mayor and McKenzie are listening.