For a glimpse at the murky world of Baltimore municipal contracting, consider these two contracts that came before the Board of Estimates this week.

They were SC 877 (“Enhanced Nutrient Removal Process at the Back River Wastewater Treatment Plant”) and SC 907 (“Improvements to Sanitary Sewers in East Baltimore Region of the High Level Sewershed”).

Collectively they are worth $269 million.

Both came under vigorous protest from rival bidders but were approved by the spending panel.

This despite the failure to comply with the city’s bid-change initializing rule by the company awarded SC 877 – and the involvement of the company winning the second contract in the recent racketeering and extortion convictions against former Detroit Mayor Kwame Kilpatrick.

To begin with the award of $263 million to Archer Western Contractors to build facilities to denitrify incoming sewage at Back River.

A rival bidder, American Infrastructure/PC Construction, accused Archer Western of altering the original forms of a minority contractor by “whiting-out” the subcontract amount and inserting in a new number.

Attorney Eliot Schaefer submitted a copy of the disputed document – page 64 of the Archer Western bid, which Thomas Corey, chief of city’s minority opportunity office, agreed seemed to be altered.

But Corey said his office could not determine whether the document was altered before or after the bid was submitted to the City Comptroller’s Office. 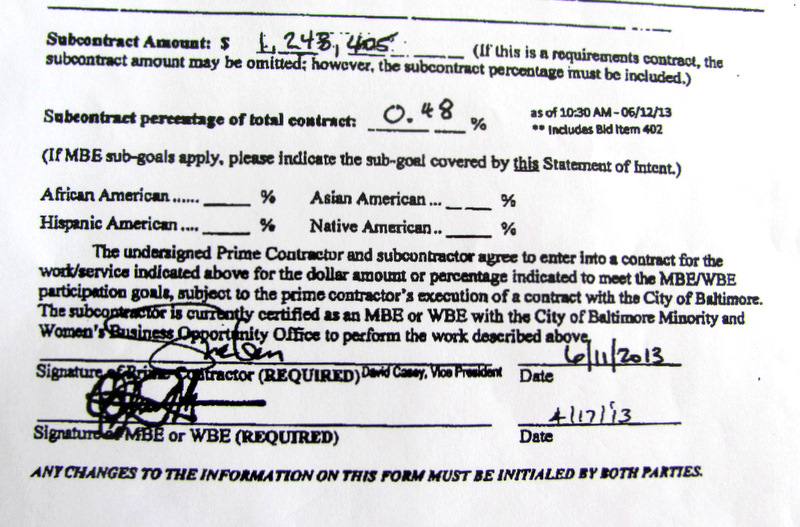 The subcontract price on upper left was apparently whited out and changed without required initials, as noted (in capital letters) at the bottom of the document.

Harriette Taylor, clerk of the board, said the company’s vice president signed the bid document on June 11, but a typed-out notation, reading “as of 10:30 AM 6/12/13,” also appears on the bid sheet.

At the bottom of the document is the city’s warning (in capital letters) that “Any changes to the information on this form must be initialed by both parties.” But there were no initials reflected on the document, said attorney Schaefer.

Because of this infraction of the rules, he asked the spending board to reject the Archer Western bid and award the contract to American Infrastructure/PC.

When his request was met with silence by the board, Schaefer asked that the award be deferred for a week.

Called up to testify, Rudolph Chow, chief of the water bureau, said he would not recommend a one-week deferment.

“We are already in danger of non-compliance,” Chow said, with a December 2016 deadline to complete the project –

CORRECTION: The above deadline is “part of a whole series of state-Chesapeake Bay deadlines and guidelines related to the flush tax,” not to the EPA consent decree, says Kurt Kocher, spokesman for DPW.

If Chow’s opposition was not enough, the disclosure that the American Infrastructure/PC bid was $15 million higher than Archer Western’s appeared to convince the board to unanimously reject the protest and award the contract to Chicago-based Archer Western. 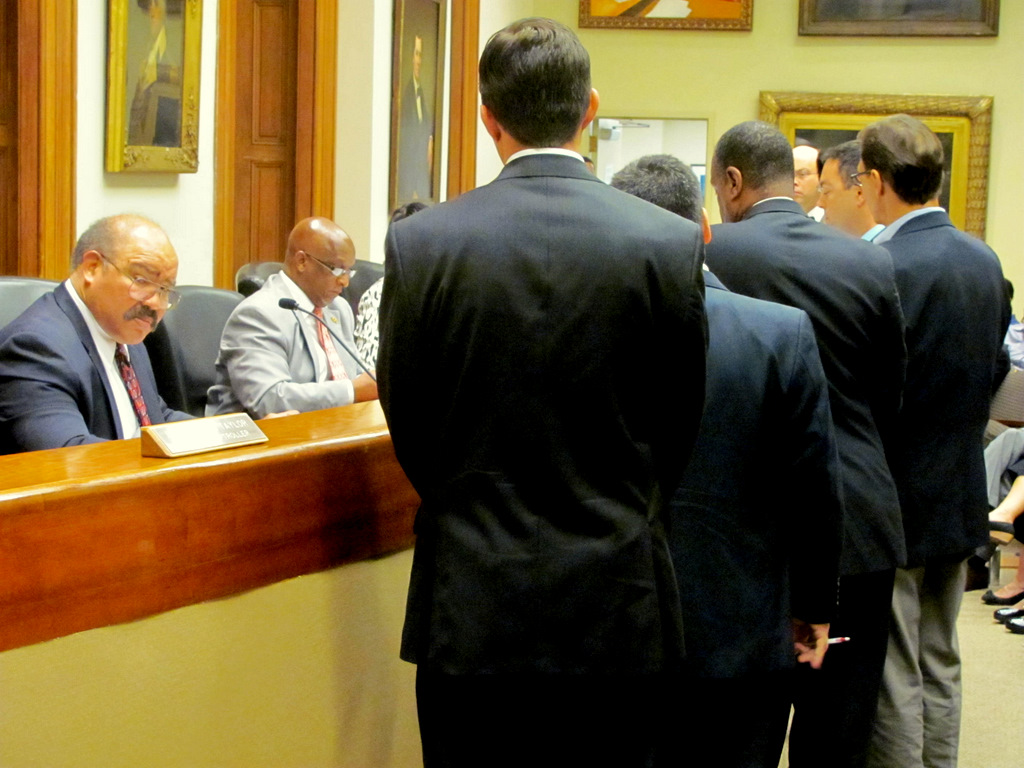 The American Infrastructure/PC team gather in front of the Board of Estimates Wednesday to protest a $263 million award to a rival. To left is DPW director Alfred Foxx and City Council President Jack Young. (Photo by Mark Reutter)

In the second matter, a protest over a $5.3 million contract was thwarted by ab initio, the Latin term for treating a legal action as invalid “from the beginning.”

Am-Liner East protested the award of the SC 907 repair contract to Inland Waters Pollution Control Inc. because the company had failed to disclose that it had been suspended by the Detroit Water and Sewage Department. (The city requires disclosure of legal actions taken against a bidder or its principals.)

But George Nilson, the city solicitor, countered that the Detroit agency had lifted its suspension after Inland agreed to pay a $4.5 million settlement. Countering the claims of Carol O’Riordan, Am-Liner’s attorney, Nilson said Inland had no obligation to disclose the suspension to Baltimore City because it was declared void ab initio (“never existed”) by the Detroit sewage agency.

Inland’s suspension stemmed from a much bigger issue – the federal indictment of former Detroit Mayor Kilpatrick and other city officials that led to Kilpatrick’s March 2013 conviction on 24 charges, including racketeering and extortion.

The convictions involved a raft of sewer contracts, some that involved Inland, as well as the supply of private planes for trips to the Bahamas for Kilpatrick and his family by the then-majority owner of Inland, according to Crain’s Detroit Business. The newspaper said Inland was identified as “Company I” in the federal indictment.

Inland also was the general contractor on a sinkhole repair contract that was rife with inflated and fraudulent invoices, according to a related lawsuit filed by the Macomb Interceptor Drain Drainage District that is still pending in federal court. Among the lawsuit’s charges is that the contract ballooned from $29 million to $54 million due to fraud and mismanagement.

These matters were not brought up at the board meeting.