On the eve of tonight’s expected approval of a $107 million financing package for Harbor Point by the City Council, a group of Fells Point residents is seeking answers to what they say has been masked during the public debate – the human health risks associated with opening the site to construction.

Most of the project, including the Exelon Tower, will be built over land poisoned by a century’s worth of residues from the processing of chromium.

So hazardous are the tailings that environmental regulators ordered the soil sealed off by a five-foot-deep cap and a perimeter barrier when the Allied Chemical factory was razed 20 years ago.

The fact that the plastic and clay cap will be breached by more than 1,000 pilings for the 22-story Exelon Tower alone has raised alarm among some residents about the massive project planned by developer Michael Beatty.

“My concern is that the city has not done the due diligence in gathering up the facts to make a sound decision as to the health risks,” says Ed Gross, a retired meteorologist with air pollution training who lives across Caroline Street from the proposed building.

“There has been a shoddy level of explanation over how the developer proposes to keep the chromium dust from spreading all over the community,” Clifford Ransom II added, as about 20 residents met yesterday and agreed to form an environmental action group.

The group, which has not yet settled on a name, said they will call on the city to stop construction at the site until an independent expert evaluates the health risks and appropriateness of piercing the surface cap.

The group said they were inspired to take action by a citizens lawsuit in Jersey City that requires Honeywell Corp. to remove about 1 million tons of chromium-laced soil from another former Allied Chemical factory.

The Baltimore plant – described as the world’s biggest chromium reduction plant in the world – was closed in 1985 after investigators found that 62 pounds of chromium tailings were being dumped daily into Baltimore Harbor, the vast majority in the highly toxic form of hexavalent chromium. 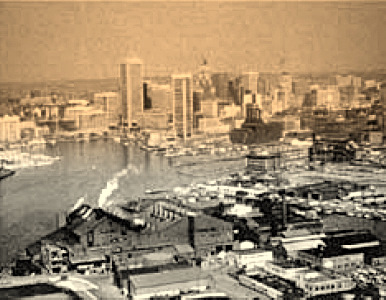 Smoke spews from the Allied Chemical plant in the 1980s, with the newly reconstructed Inner Harbor in the background. (Maryland Department of the Environment)

As an early “brownfield” site, the Maryland Maryland Department of the Environment (MDE) required Honeywell, which purchased Allied Chemical, to entomb the toxic soil and seal off the site’s groundwater from the harbor.

Honeywell proposed the same solution in Jersey City until the citizens’ lawsuit forced the company to remove the soil rather than place a cap over it.

David Johnson, who lives on Fells Street, said the original plan for Harbor Point called for light residential and commercial development over the capped land.

In 2010, the City Council approved up to 1.8 million square feet of development, giving the project the rough density of the Inner Harbor. New legislation has upped the amount to 3,020,000 square feet of office, apartment and retail development.

The project will take 10 years to build and include five parks and a waterfront promenade financed through the $107 million in city-issued bonds.

Stelios Spiliadis, spokesman for the Fells Point group, said in an interview yesterday that rushing into construction before a thorough environmental review could be a grave mistake.

For example, the entombed tailings at the site are believed to be highly alkaline, which causes the chromium to remain its its toxic hexavalent form rather than to degrade to its less toxic trivalent form.

Releases of hexavalent chromium, a known carcinogen, into the air during construction could pose a serious health hazard for the surrounding communities, Spiliadis said.

The City Council’s finance and development committee did not address the human health issues of construction other than receive a reassurance from a vice president of the Beatty Group that the developer will closely follow protocols established by state and federal regulators.

Prior to any redevelopment, MDE and the Environmental Protection Agency (EPA) must certify that construction will not increase risks to human health or the environment. The agencies are expected to announce certification by mid-November to adhere to the Beatty Group’s aggressive construction schedule.

As precedent for new construction, the Beatty Group argues that the Morgan Stanley Building at the Thames Street Wharf did not stir up any chromium dust. As a result, the developer does not expect any problems at the Exelon site, where the pierced cap will be re-sealed after construction.

The Morgan Stanley building, however, lies east of the capped zone and did not breach the five-foot-deep clay, plastic and soil shield that’s been proposed for the Exelon Tower, said Spiliadis, owner of the Inn of the Black Olive in Fells Point. 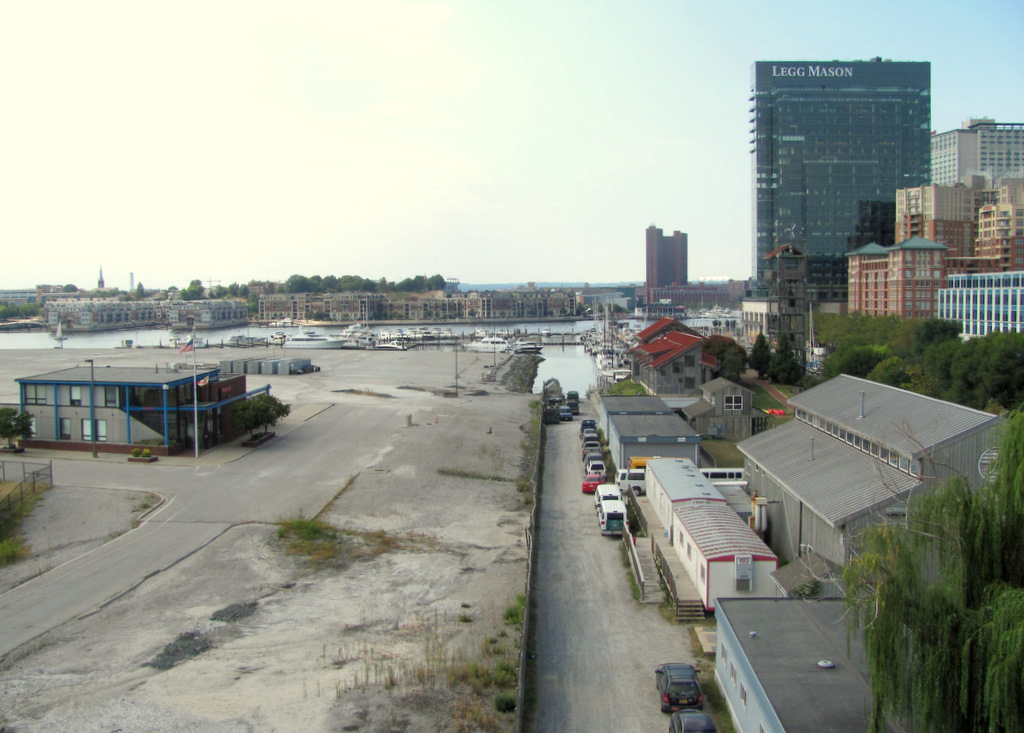 The capped surface of Harbor Point yesterday. The Honeywell office monitoring groundwater levels at the site is on the left. Harbor East’s apartments and the Legg Mason Tower are on the right. (Photo by Mark Reutter)

Several Amendments Before the Council

Tonight’s Council meeting will not address any of the environmental issues.

Instead, the body is expected to give final approval of $107 million TIF financing for Harbor Point and will hear several planned amendments – most notably, a call by Councilman Carl Stokes to place $3 million from Harbor Point property taxes into a fund “to provide for the development of inclusionary housing within the project.”

Additionally, there will be an amendment by Stokes calling on the city to “recognize and protect public transparency, participation and accountability” in the project and for a “labor peace agreement” requiring recognition of a union by any future hotel owner on the property.

None of the amendments is given much chance of passage.