After describing “wholesale changes” planned in the wake of a damning audit released by state officials in April, Baltimore Liquor Board Chairman Stephan W. Fogleman returned from his Annapolis appearance last week to find persistent skepticism about his efforts and high-level hostility toward his agency.

“I didn’t hear anybody question anything about the actual decision-making – that concerned me,” said Victor Corbin, president of the Fells Prospect Community Association, one of the citizen activists following Liquor Board issues closely who attended the hearing before the General Assembly’s Joint Audit Committee.

Corbin was hoping to hear Fogleman or the lawmakers discuss what he considers the most substantive and serious problems cited by the auditors, such as licenses allowed to remain valid beyond the 180-day limit after which, by law, non-functioning establishments must give them up.

Another reason for the collective eye-roll by Corbin and his fellow community leaders?

They’re unhappy about the composition and conduct of the Governor’s Working Group, created to decide how to act on the auditors’ findings through law or policy changes or new leadership at the long-criticized agency.

“Who is on this group? said Joan Floyd, of the Remington Neighborhood Alliance. “It’s been hard to find out.”

“We call it ‘The Secret Working Group,’” said Corbin, noting that he and other community leaders, as well as the Community Law Center – including many who like Corbin quietly gave input to the state auditors – have not been allowed to serve on the panel.

(Lawyer-bloggers from the Center – in a joint Liquor Board watchdog project with The Brew – have been attending weekly hearings of the commissioners and have been finding persistent problems, post-audit.)

Even Mayor Stephanie Rawlings-Blake was piling on this week.

She observed in remarks to a Baltimore Sun reporter that she was “frustrated personally” with the board since its leadership is composed of “patronage positions controlled by the state senators,” who have been getting in the way of changes she’s “been pushing and pushing for.”

“I have no comment on that,” Fogleman said to The Brew, after a snort of derision.

During a phone interview, Fogleman declined to engage in one other area. The 91-page audit released in March – citing everything from lack of written policies to inspectors turning in inspections for defunct establishments – noted that pretty much the same issues were singled out in a 2007 audit and have gone uncorrected in the ensuing six years.

Technically, the lapse occurred on the current leadership’s watch. Under questioning Tuesday, Fogleman said he became a board member in 2007 and Douglas Paige, the agency’s acting executive secretary, said he went to work there in 1990.

Asked about it by The Brew, Fogleman said “I don’t want to rehash the past. We’re really excited about the fact that we have 90% of our corrective action plan done that’s going to give us an opportunity to correct these issues efficiently and in a lasting way.” 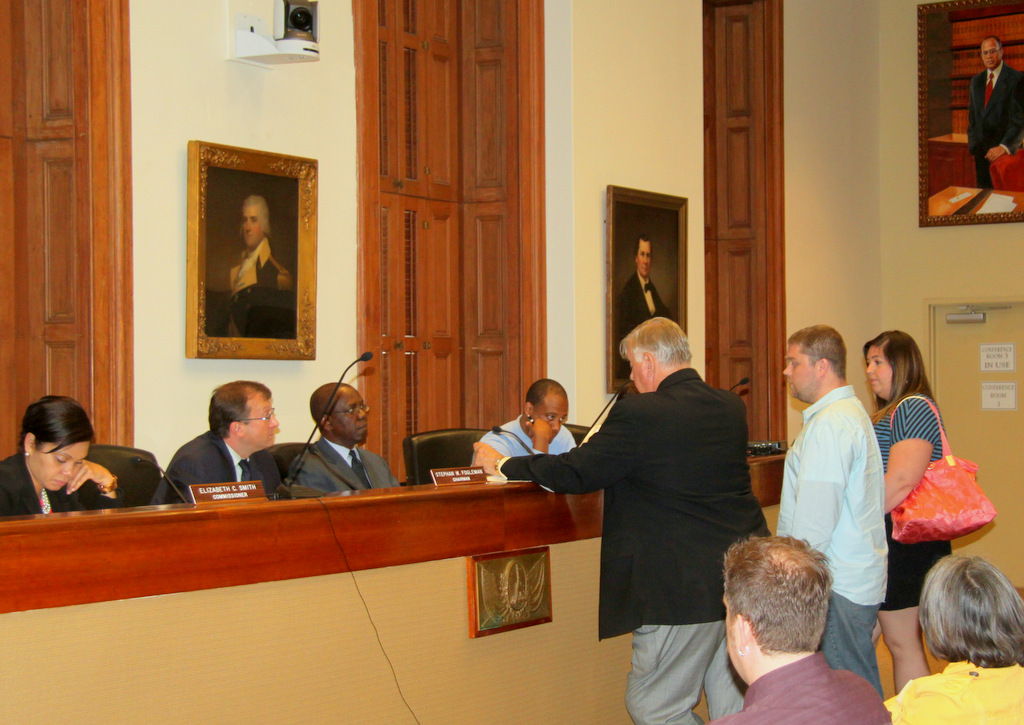 Attorney Melvin Kodesnski representing clients before the Baltimore Liquor Board in June. (Photo by Fern Shen)

On elements of that plan and other issues, Fogleman spoke at length.

• Updating Technology – The board is hoping to equip and train inspectors with iPads and generally move them from antiquated record-keeping to a “mostly paperless” system with “handheld devices and a central database,” which would “allow us to retain all records, have access to all records. The public would have access too.”

Would the inspectors be able to issue citations on the spot? “Yes.”

• Sound Meters – The auditor on Tuesday noted that the agency has had a sound meter but it has never been used. Why wasn’t this technology put to use?

“Look, I don’t disagree with any of the recommendations. I’ve been told the agency had a sound meter. We will make sure the inspectors have proper training and use it.”

• “The Matrix” – By that Fogleman means the document the staff has been preparing and will present to the board by October 1, which will have charted out what needs to be fixed, who needs to fix it, written policies that need to be established, etc.

• Documentation – Applications approved without proper documentation was another problem pinpointed in the audit (and subsequently discovered by the Law Center and confirmed by The Brew). Fogleman said they are working on it.

• Attorney General’s Opinions – So what about that 180-days-of-inactivity-and-you-lose-your-license thing, a seemingly cut-and-dried legal requirement singled out by the auditors as an area where the board has not followed the law?

Fogleman noted that the issue came up (and is under appeal) in the controversial case of the Crossbar beer garden proposal in Federal Hill.  He said they will be looking closely at attorney general’s opinions, including one  sought in the Crossbar case by Del. Brian K. McHale (D-46th). Fogleman’s point of view, meanwhile, is clear.

The six-month requirement is too onerous, he argued. “Anyone who does construction knows 6 months is very unrealistic. If they’re gong to insist on that, the law may need to be changed.”

Corbin said residents gratified by the detailed findings in the audit were eager to participate in the Governor’s group convened to follow up on its recommendations. But although they formally asked to be included, they were not. (Other critics have said excluding citizen participants is especially troubling because lawmakers might favor the interests of bar, restaurant and liquor store owners who make monetary contributions to their campaigns.)

One member, Sen. William C. Ferguson IV (D-46th), explained that the working group is “informal,” but “diving deep in the audit and it made sense for it to be a small group.”

If legislation is proposed as a result of their work, citizens would be able to get involved in that process, he said. He said citizens are meanwhile being well represented by the group’s elected legislative members, including himself and Senators Verna L. Jones-Rodwell, Joan Carter Conway and Lisa Gladden.

He said the group is chaired by Beth Blauer, former StateStat director, and includes other state officials, including the governor’s appointments secretary, Jeanne Hitchcock and a representative of the Department of Budget and Management.

Representatives from the city are also part of the group, reflecting the Liquor Board’s hybrid persona. (The commissioners are appointed by the governor following recommendations by Baltimore city senators. Though the board is a state agency and not directly controlled by the city, its revenues from fees and fines are turned over to the city, and the city bankrolls its operations.)

Ferguson said they meet at the governor’s office in the William Donald Schaefer Tower and have met four times.

“The idea is to see if there are recommendations we could make to create a better-functioning Liquor Board and, it’s been made clear, to bring it into the 21st century,” Ferguson said.

Does that include governance changes, given the long history of charges that the agency is politically tainted by meddling from senators via their Liquor Board appointees?

Ferguson, a city senator since 2011, said  in reply that “anything involved in the public sector is inherently political in some way.”

“I think the governance structure is important,” he said, “but I care much more about outcomes.”