Yesterday’s Board of Estimates meeting was notable for the mayor’s resurrection as a lively cross examiner.

After months of barely uttering a word about the millions of dollars worth of contracts that routinely win the board’s approval – Stephanie Rawlings-Blake pressed a contractor yesterday to admit that his company had repeatedly skirted the city’s minority participation goals.

A red-faced representative of Long Fence Co. sidestepped, backtracked and finally apologized for his company’s failure to give promised work to minorities – not just this year or last year, but for 10 years running.

Saying he was “not denying what happened in the past,” Bill Cronin told the mayor and BOE that he was making good faith efforts to give more work to minorities, but could give no guarantees. 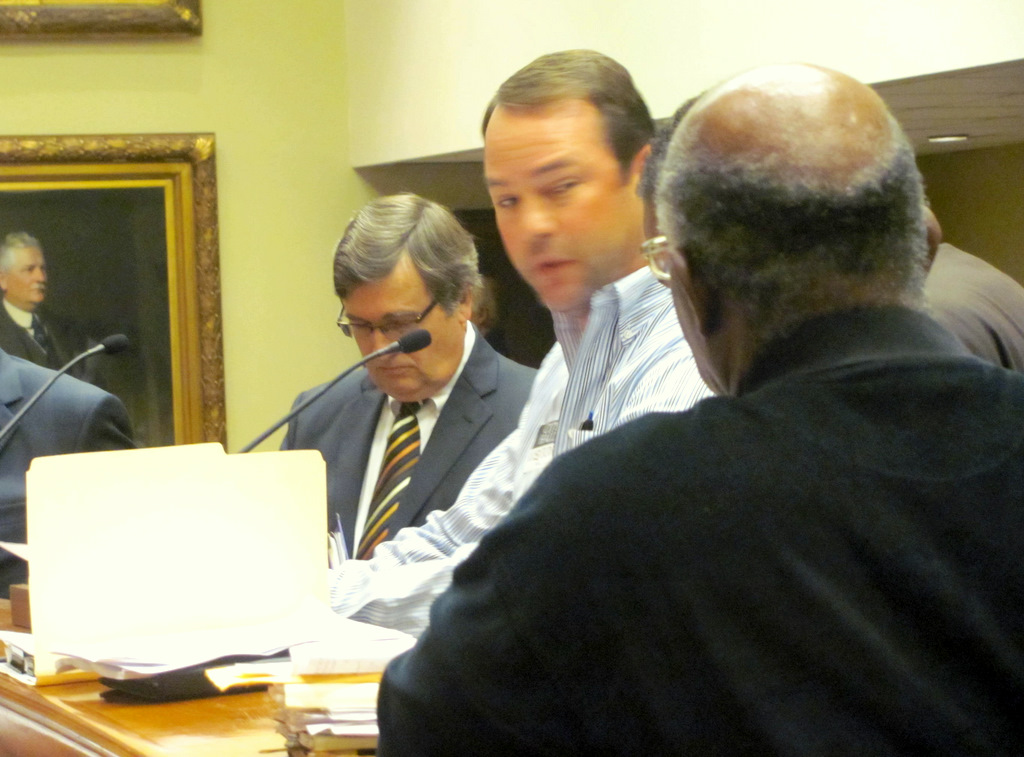 Bill Cronin of Long Fence addresses Charles Spark, a minority contractor, at the Board of Estimates. To his right is city purchasing chief Timothy Krus. (Photo by Mark Reutter)

The mayor’s response was polite but to the point.

“We tend to give people the benefit of doubt, but there’s a history of doubt. . . The track record is troubling.”

She said that the  company’s attitude seemed to be, “We’ll do it if we can and we’ll get by.”

Last week, the mayor surprised Thomas Corey, director of the Minority and Women’s Business Opportunity Office (MWBOO), by halting a request for a $100,000 contract extension to Long Fence following objections by Arnold Jolivet of the Maryland Minority Contractors Association.

Jolivet said that Long Fence had failed to include Sparks Quality Fence, a minority contractor, in a $300,000 contract approved by the board last September. Charles A. Sparks, president of the company, told the mayor that he had actually been the contract’s low bidder but was passed over by the purchasing department.

In testimony introduced yesterday by City Comptroller Joan M. Pratt, the board learned that Long Fence had won $3.5 million in city contracts despite being mostly out of compliance with minority hiring goals since 2003.

As a member of the Board of Estimates since 2007, the mayor had approved several of the fence contracts. But yesterday she was having no more of it, asking the panel to reject the extension of Long Fence’s contract and to award the work “to the second low bidder” (apparently Sparks Fence).

The motion was approved unanimously.

“The mayor is reasserting that she’s serious about allowing African American businesses to get their fair share of municipal contracts,” Jolivet said. The lack of progress of minority contracting in the city has become a concern in the black community, according to Jolivet, and the mayor is feeling the heat.

After yesterday’s meeting, MWBOO’s Corey insisted to The Brew that the board had voted to award the contract to the second low bidder “if appropriate.”

Corey held open the possibility that Long Fence may continue to get city work through contracts under a monetary threshold that does not require Board of Estimates approval.