As advocates for the homeless in Baltimore see it, the bill introduced in January to criminalize panhandling in median strips or on the shoulder of roads has gone from bad to worse.

Now Bill 13-0186 has amendments that make soliciting (asking for money or anything of value via spoken or written words) illegal in a long list of prohibited places, including:

Within 10 feet of an ATM, on public transportation, from anyone in a vehicle on a public street, within five feet of a person using a parking meter, on a pedestrian bridge, within 10 feet of any place where people are paying for goods or services with cash or credit cards.

The bill’s original sponsor, Councilwoman Rochelle “Rikki” Spector, has said its purpose is safety – to protect panhandlers from traffic and the public from panhandlers.

But Fasanelli and a troop of other advocates were in Council chambers to offer an alternative view – that the bill stems from city leaders’ intention to cleanse the downtown landscape of the sight of homeless people.

They pointed to comments by people like Tom Noonan, CEO of Visit Baltimore, who said in a letter of support for the bill that promoting tourism “becomes more challenging when guests, upon entrance to and departure from our city, are faced with panhandlers approaching vehicles.”

The sight of panhandlers creates “a negative impression of the city,” decreases “visitor economic activity” and costs Baltimore $11.1 million annually, according to what Noonan described as an unpublished study commissioned in 2009. 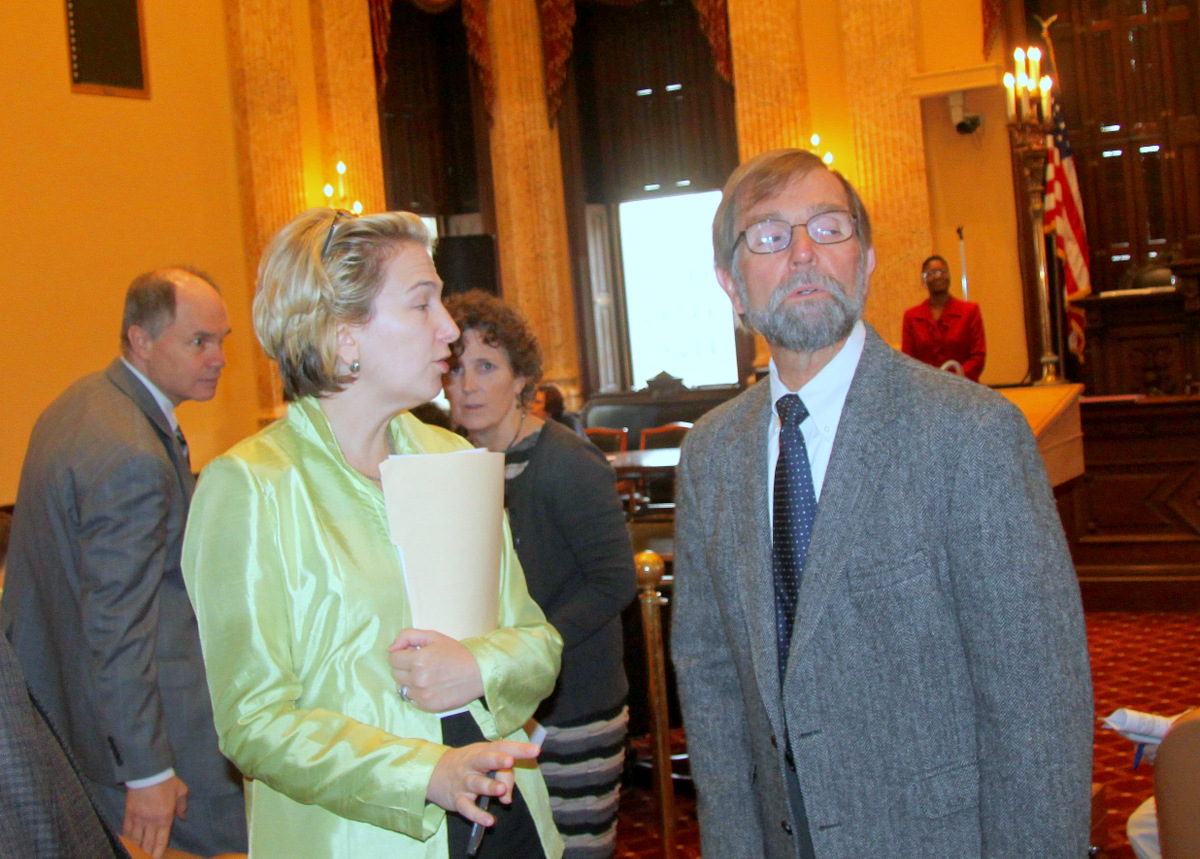 Advocates say the city should be attacking the problem by reducing poverty and homelessness, rather than passing redundant laws that criminalize the down-and-out.

“It should be upsetting that in the wealthiest state in the history of the world, there are people begging for whatever change you can spare,” said Adam Schneider, community relations specialist at Health Care for the Homeless, speaking during a break in yesterday’s meeting of the Judiciary and Legislative Investigations Committee.

Bill Advances, Despite Efforts to Narrow It

The advocates never got a chance to formally make their case (even though there had been a sign-up sheet to testify). The committee chair, Councilman James B. Kraft, said the session was strictly for lawmakers’ discussion purposes followed by voting.

Their 3-2 vote for the bill and amendments was cast with little discussion. (Voting for: Councilmen Kraft, Warren Branch and Robert Curran. Voting against: Councilwoman Mary Pat Clarke and Councilman Bill Henry. The measure will come before the full Council on Monday, November 4.)

But even without public testimony, the larger debate came through, in a session that was punctuated by delays (for late-arriving councilmen), crosstalk (among lawmakers and staff), and a failed effort by Henry to narrow the amendment’s scope.

His amendment to the prohibition on soliciting within 10 feet “of anyplace where persons pay for goods or services with cash our credit cards” would have added “in an outdoor setting.”  It was voted down by Kraft, Branch and Curran.

The advocates also had apparently tried to modify that provision. Emerging from a negotiation session with Fasanelli and Schneider, as well as Henry and Clarke, Kraft appeared agitated.

“I can’t have it be five feet when people are spitting on peoples’ food when they’re eating outside at a restaurant table,” he exclaimed, spreading his arms to show how close five feet was.

Asked if there are places where panhandlers actually do that, Kraft said “Oh, it’s a regular occurrence in Fells Point.” Asked by The Brew to name establishments where this has occurred, he said he would supply the names later.

Could they all meet to iron the language, Clarke asked. “I’ve already done this three times – I’m not going to do this again,” Kraft said. Fasanelli said she was “never asked for a sit-down.”

Where did the push to get tough on the city’s street population with new language come from? (Existing law already prohibits soliciting in traffic and aggressive soliciting anywhere.)

The new “prohibited places” provisions are referred to as “The Downtown Partnership amendments” by the city law department in memos on file with the bill. That’s the term Chief Solicitor Elena R. DiPietro used in an August memo questioning the constitutionality of the partnership’s initial proposals, specifying waiting in line for theater and sporting events, among other places.

“There is simply no recognized substantial privacy interest in being free from listening to the speech of others when a person is standing in line or seated in areas defined in the amendment,” she wrote, citing legal opinions in cases involving the Seattle Center and the Westboro Baptist protests. 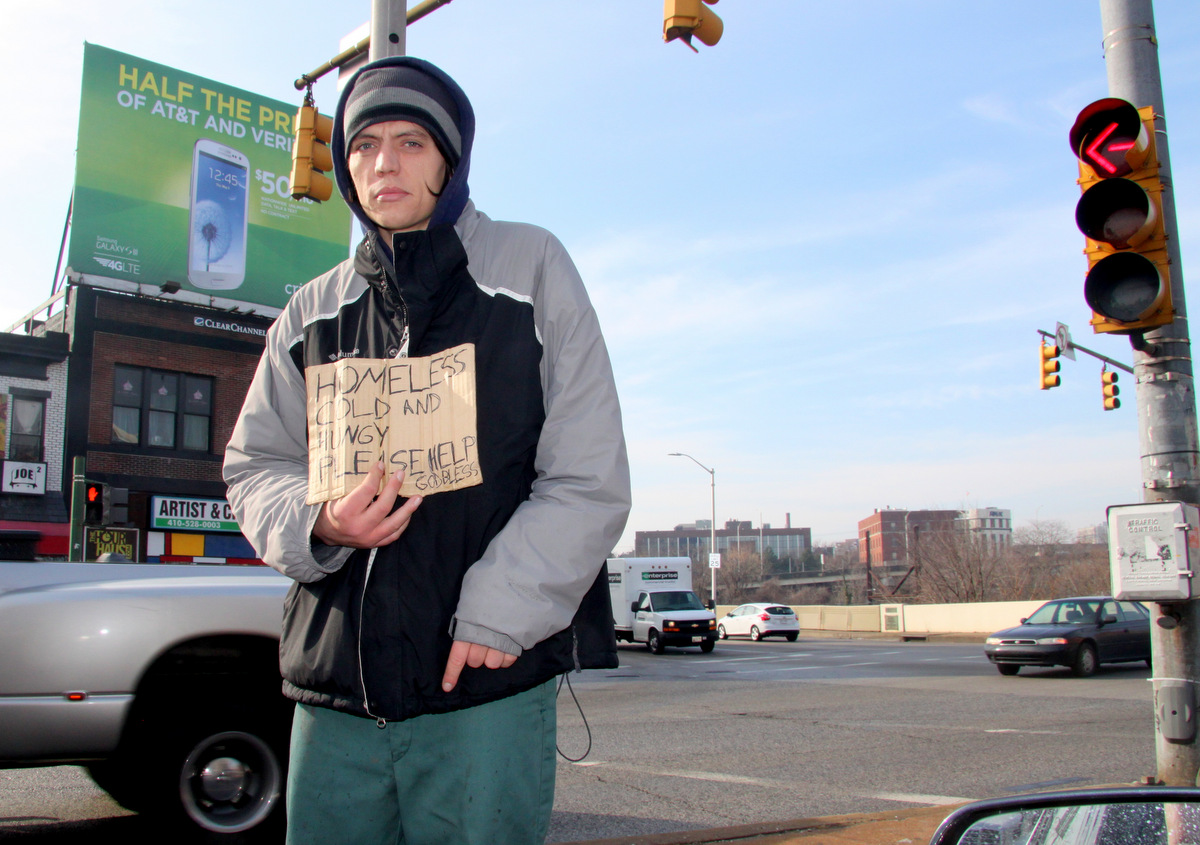 This man, asking for money earlier this year from the median at West North Avenue, said “I’m not hurting anybody.” (Photo by Fern Shen)

The Baltimore amendments are likely to cover “public park areas in the Inner Harbor or streets and sidewalk areas, both of which are considered public forums for First Amendment purposes.”

She advised the city to “present evidence that the law was not enacted merely for the purpose of reducing the presence of beggars in some areas.”

With some changes, and DiPietro’s recommended “whereas” clauses with “content neutral justifications” like “impeding traffic and safety concerns,” the law department signed off on the bill.

Other bills in the pipeline that crack down on the city’s street population are also undergoing legal and community review.

One of them, Bill 11-0005, specifies that when a police officer tells someone loitering to “move on,” they must move 500 feet. Its sponsor, Councilman Henry, said that the bill, originally scheduled to be considered by the committee yesterday, needed more work.

Advocates for homeless people may be rallying against the legislation, but the city officials that they interact with support it.

“It is the opinion of the Mayor’s Office of Human Services, the Homeless Services program, that the Bill strengthens the already existing Ordinance, thus providing greater safety protection for motorists, pedestrians and persons who are soliciting,” wrote its Homeless Services Director Kate Briddell.

She goes on to encourage police officers to give “street-cards” to homeless persons to make them aware of shelter locations and phone numbers for crisis hotlines and child protective services, mental health, domestic violence and drug treatment. 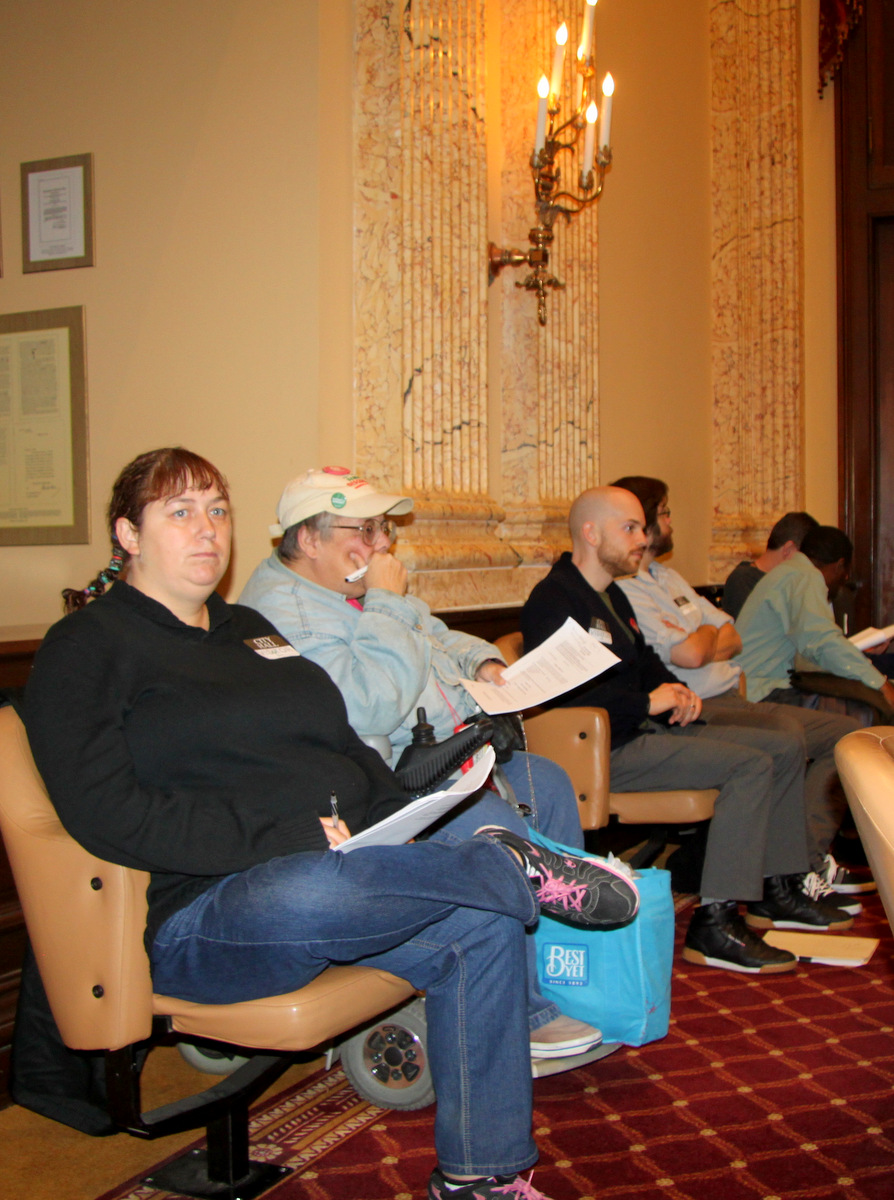 Bonnie Lane and others who came to City Hall speak on behalf of homeless persons in Baltimore. (Photo by Fern Shen)

“It implies that people who are not choosing these services should be punished,” said Matt Quinlan, of Housing Our Neighbors. As good as those programs are, they still don’t address the root causes of the problem, Schneider noted.

Schneider argued that the law enforcement approach is also “a very ineffective way” to address loitering, panhandling and homelessness. Adding a criminal record for a minor offense, he said, makes it less likely that homeless people will enter the mainstream.

“People who stand on the street, they don’t want to be there. The reason they’re there is they are very poor,” Schneider said.

“You give them a citation they can’t pay and a record, and it’s harder for them to get the housing and employment they desperately need.”