Trying to run their father’s shoe and leather repair shop since he died of cancer, two sons are confronted every day with reminders of how much Stefan W. Gegala’s skills meant to his customers and how rare those skills are nowadays.

“Our father could have done this for you very nicely, he would have liked this job,” said Rafal Gegala, apologizing to a man who had come into their North Baltimore store with a fancy ceramic-handled knife, in a plain synthetic-fabric holder.

Could they custom-make a leather replacement?

“We could try,” Rafal Gegala told him, wincing a bit, but they might have to charge $100 and “you might not think it’s worth it.” The man pocketed the knife, told them, “That’s alright,” and left.

The brothers aren’t cobblers – Rafal, 37, has a degree in computer science and younger brother Zbigniew, 35, is an electrical engineer – but they know enough about the skills their Polish-born father honed over 50 years of working with leather to know when others lack them. 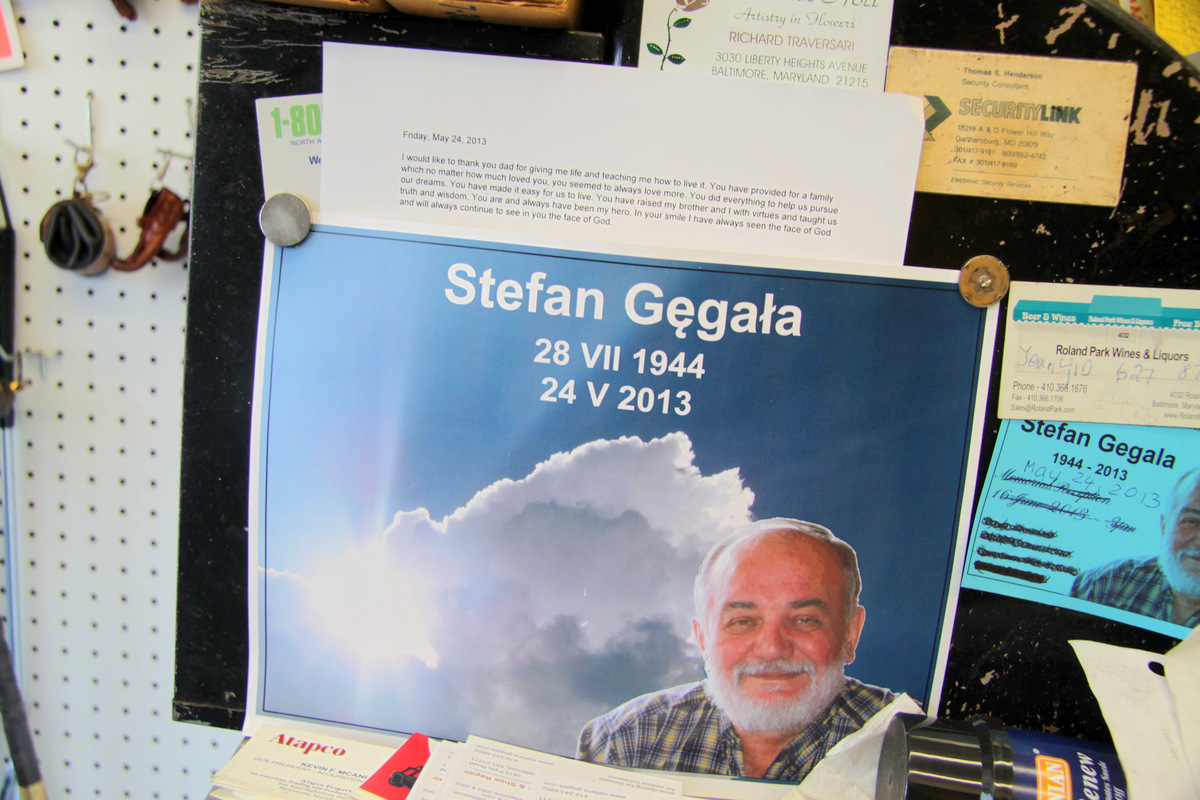 Some customers are still just hearing about the owner’s death in May. (Photo by Fern Shen)

That’s proving to be a huge problem as they try to find someone to take over Stefan’s Leather & Shoe Repair – the business their father began in 1992, first on Roland Avenue and then at the present location, 3810 Falls Road in Hampden.

Skilled leather workers and shoe repairers in Baltimore are dying off or retiring and no one is replacing them, they are realizing.

A Craftsman and a Character

The brothers spoke this week as Curtis Sample, a 40-year-veteran of shoe repair and a friend of their late father, worked in the back on an assortment of repair jobs. (“We called him in when our father first got sick.”)

Both boys had been living and working in Poland and came back to Baltimore when their father was diagnosed with cancer. 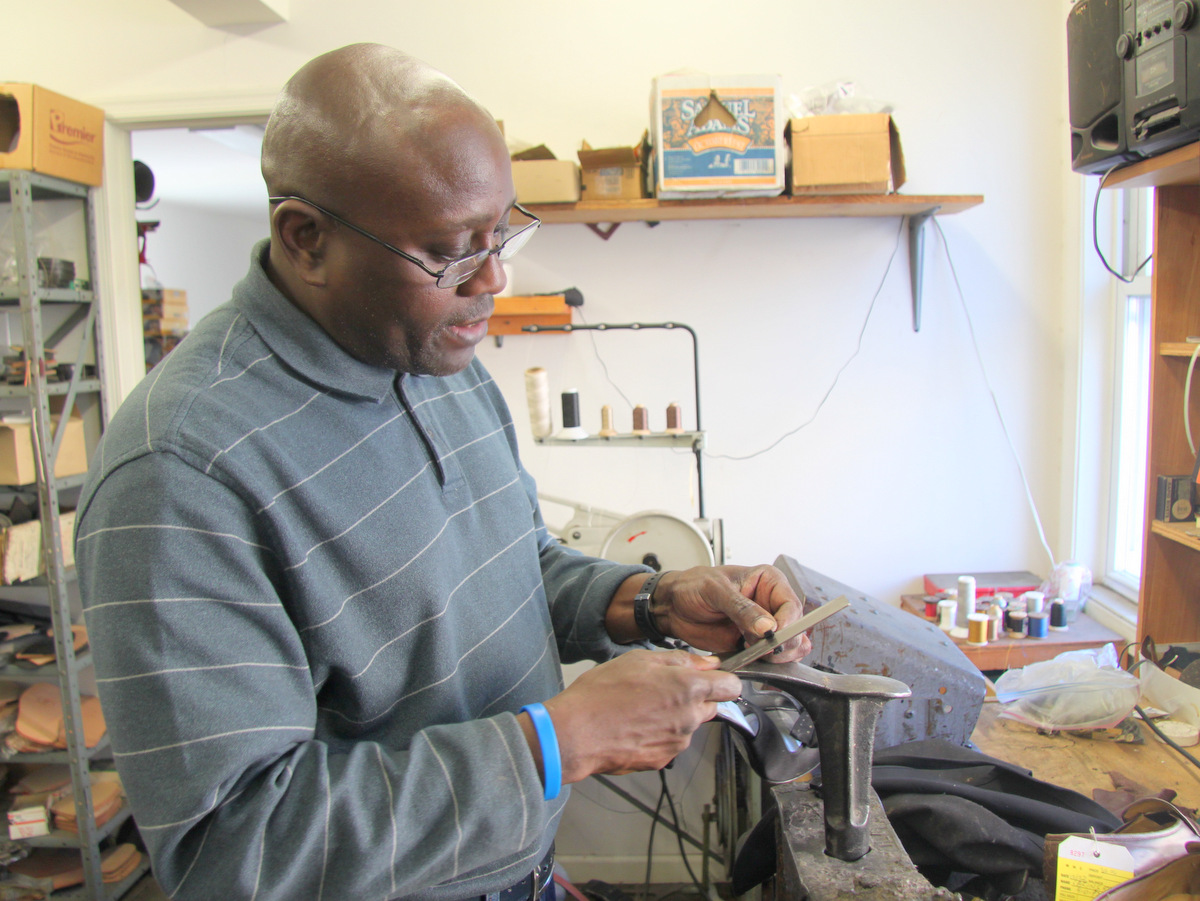 Chatty with customers, launching easily into discussions about politics or society, Stefan always spoke proudly about his boys – their technology skills, their education (Rafal’s degree is from UMBC, Zbigniew’s from Cornell University), and their language skills in French and Italian as well as Polish.

Now the sons are hearing those customers sing the praises of their father, as they bring in not just shoes and boots to be repaired but great Stefan stories to be passed along to the next generation.

(Customer Nima Shahidi volunteered one Tuesday about a notoriously difficult customer: “Your shoes were impossible and not worth fixing, so I threw them away,” Stefan told her. He let “her go nuts for a long time” before he told her he was only kidding.)

“It has been the best experience for me, to have been in the store since he got sick and after he passed away,” Zbigniew said.

“Meeting his customers, hearing how much he helped them, how much they liked talking to him. Sometimes they’d be late for work, backing out of the shop, and still he was talking.”

While cleaning up the shop, they found letters saying things like, “I thought those shoes were gone, they were my favorites, thank you for bringing them back.”

Coming to America with One Suitcase

Stefan liked the challenge of making a tricky repair that wouldn’t look like a repair. “He told us, with that kind of thing, to think about it, but to wait and come at it in the morning,” Zbigniew said.

They’re thinking back about all his advice now that he’s gone, in particular, “If you have a dream, go for it.” 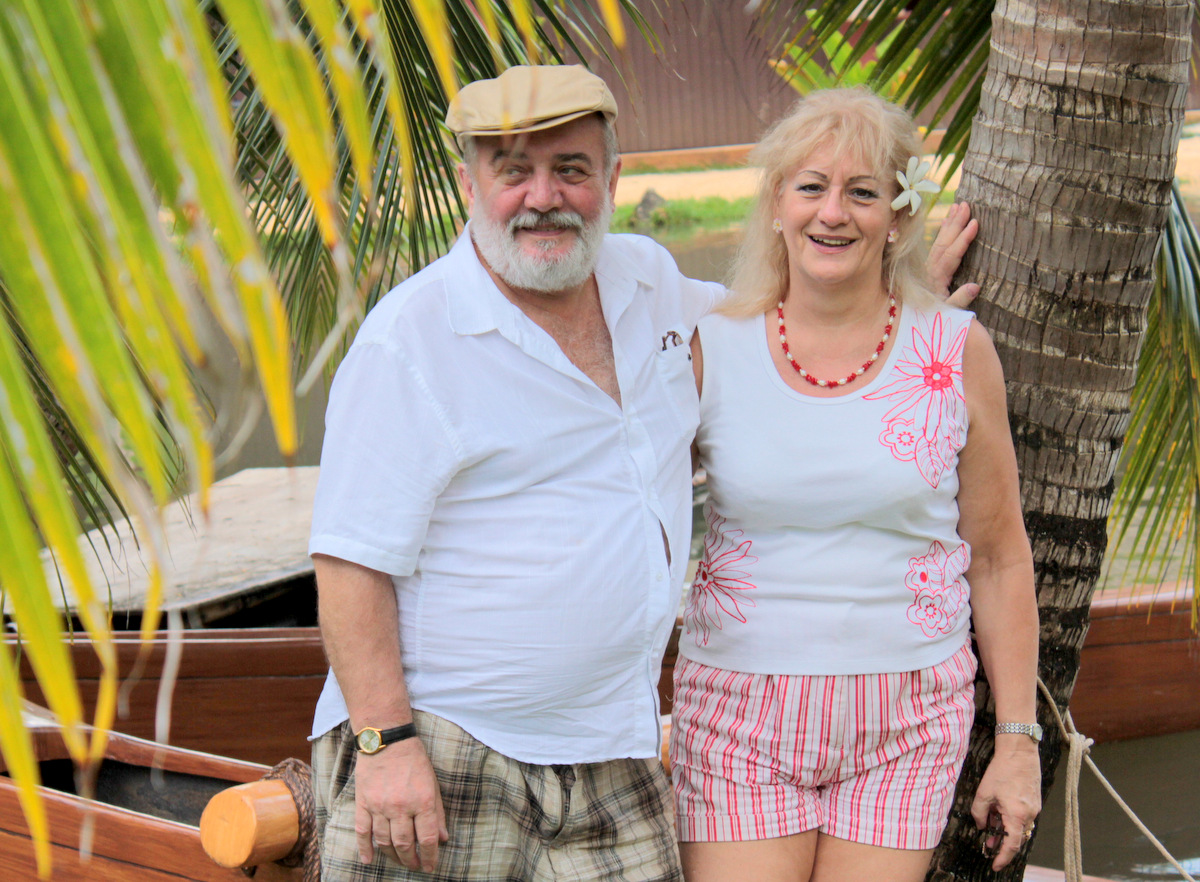 Stefan and Elizabeth Gegala in Oahu in 2011. (Family photo)

That was the attitude behind their father’s decision, as a young man who grew up near Krakow and trained at a vocational school, to leave Poland and move to America. Stefan had finished a vocational school and worked as a leather inspector but had very little money.

“The currency in Poland was worth so little, he sold his house and got $1,000 for it,” Zbigniew said. “He came here in 1983 with a wife, two little boys and one suitcase.”

They moved into a house in Parkville and Stefan worked as a cobbler at Reisterstown Plaza. With his savings, he bought the shop and equipment from longtime Roland Park cobbler Peter Dongara, who had been in that location for 45 years.

A Trick for Stuck Zippers

Their father worked 60-hour weeks at the height of his career, had a magical trick to un-stick a zipper and fixed all manner of broken things – horse saddles,  bike seats, luggage and watch-bands – as well as shoes and boots.

Zbigniew recalled an $80-per-strap “Barcelona chair” that came through the shop. 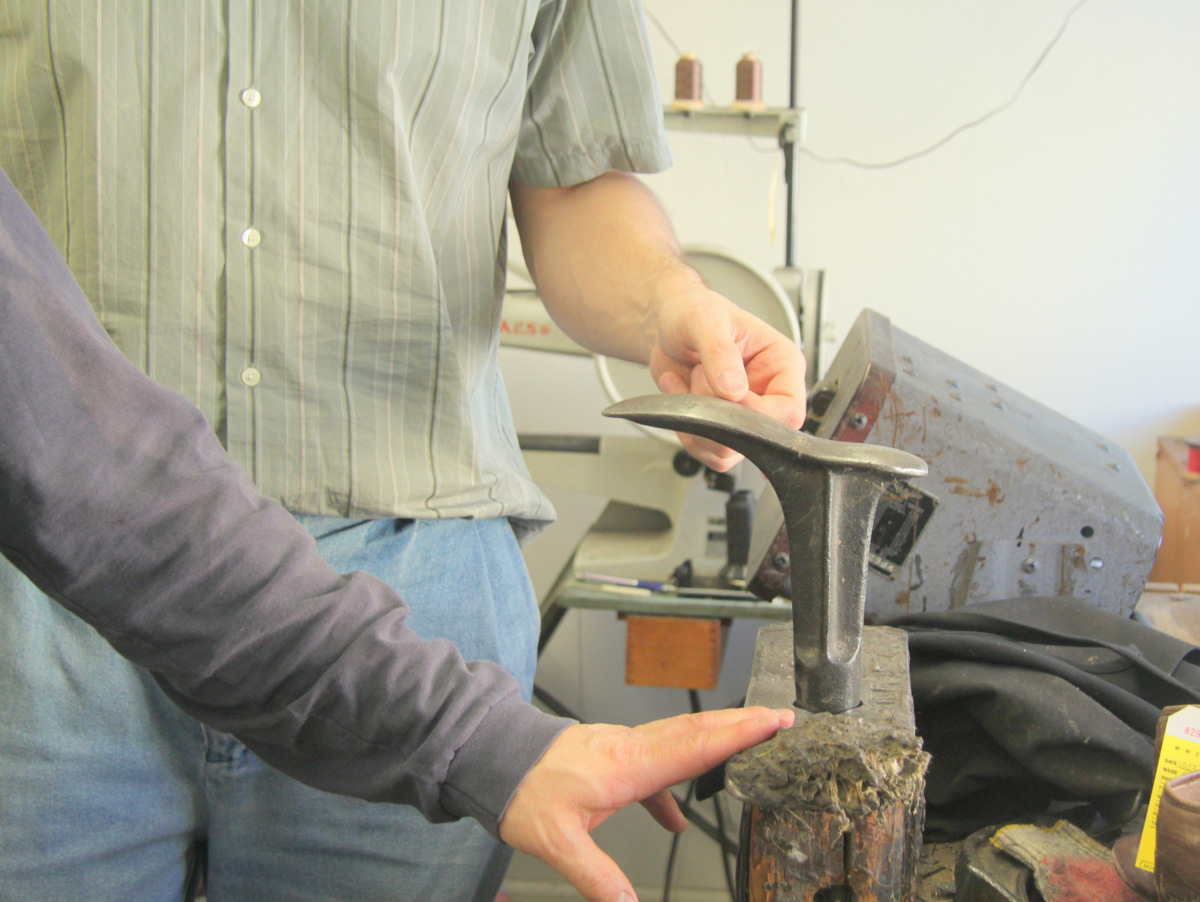 What place here do you associate with your father? Both boys instinctively laid their hands on the cast-iron shoe repair stand. (Photo by Fern Shen)

For someone who wants an opportunity and knows the trade and wants to work hard, he said, “it would be a great chance for them.” Cheap shoes that aren’t worth fixing have sounded the death knell for cobblers, but Zbigniew is convinced that people are more willing these days to buy higher-priced shoes and handbags and keep them longer. “It’s a trend not for the rich but for the middle class.”

He also observed that their father’s life in his shop had a nice balance.

“He was able to help someone who had their most favorite bag and thought it was ruined, he was able to put us through colleges – those couldn’t have been cheap – and he was able to own his own two houses and a business, and really enjoy his customers,” Zbigniew said.

“It seems like a simple thing, a pair of shoes, but they’re important to people. To make a living from saving them, this made him really happy.” 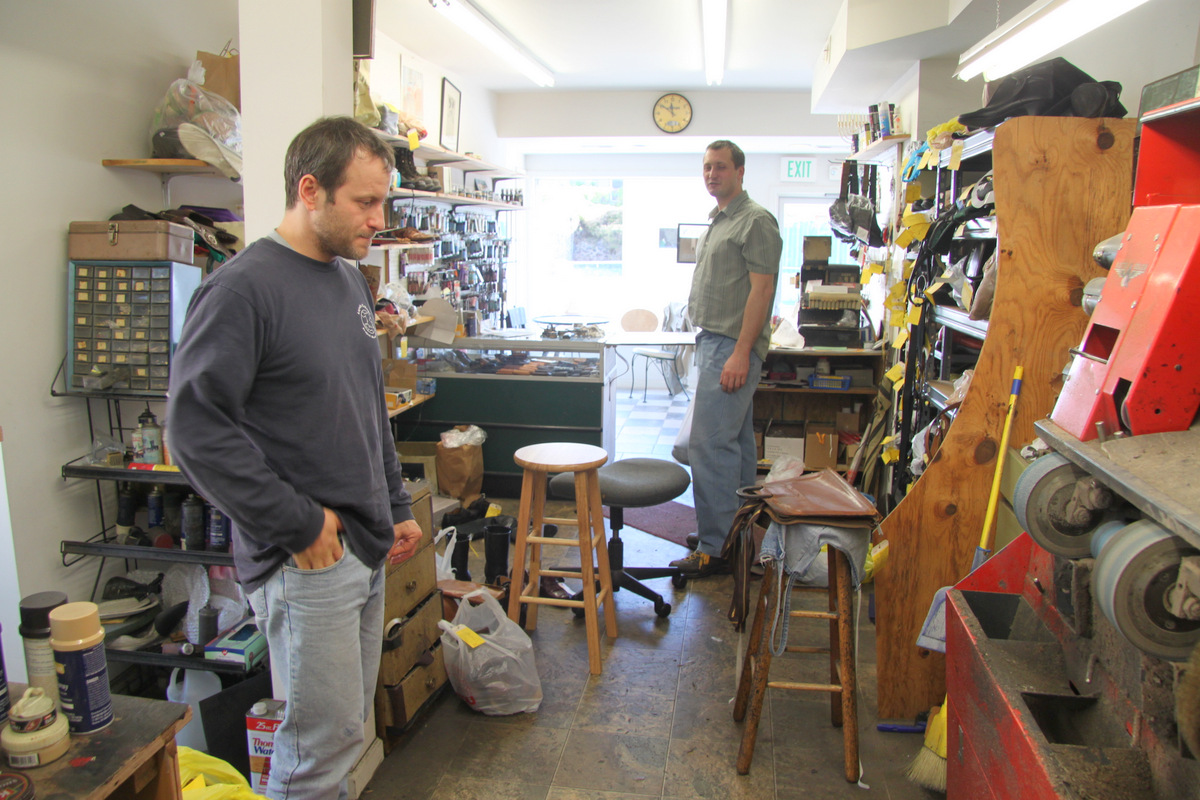 Zbigniew and Stefan Gegala inside the Falls Road shop. (Photo by Fern Shen)