Mayor Stephanie Rawlings-Blake said she doesn’t know whether “smart” water meters would add to the bills of 1.6 million users of the city’s water system.

After repeating earlier statements that the new meters would provide “more accurate reads” of home water usage, the mayor was asked yesterday by Fox 45 News if the meters would increase customer bills by detecting more minute flows of water.

The mayor said she had not read an article (published in The Brew) that described how the leading bidder promises the city $160 million in added revenue over 20 years through better detection of very low flow residential usage.

Rawlings-Blake had no comment when the story was summarized to her, saying her staff would inform her of the status of the contract in the very near future.

The mayor said she has “not been involved in the procurement process,” echoing her earlier statements when this website broke the news that a small Columbia-based cell tower repair company, Dynis LLC, bid $101 million more on the meter contract than its only competitor, West Coast-based industry giant, Itron. 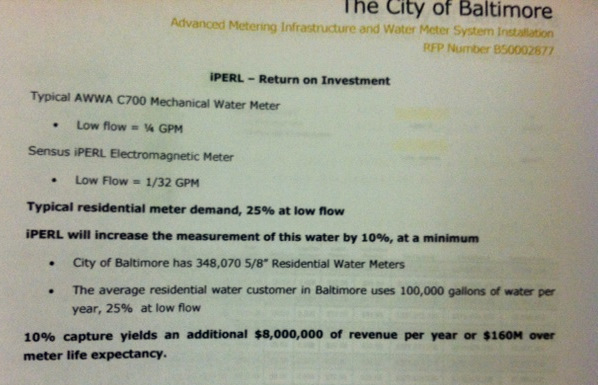 The Dynis bid details how the city will gain $160 million in new revenues from its smart meters. (Dynis LLC bid)

The contract may appear before the Board of Estimates for approval as early as next week. The five-member spending board is controlled by the mayor by virtue of her vote and the votes of her two appointees, DPW director Alfred Foxx and City Solicitor George Nilson.

After five meter companies were whittled down to two during the city’s laborious RFQ (Request for Qualifications) and RFP (Request for Proposals) process, two prices emerged at the public opening of bids last month – $83,516,634 by Itron and $184,748,011 by Dynis.

Despite its much higher price, the Dynis bid is believed to hold an edge over Itron and will score higher on “technical qualifications” that account for 70% of the award determination. (Only 30% of the award is based on price.)

If Dynis gets a full 70 technical score from the anonymous scoring panel – and Itron gets a significantly lower rating – Dynis could emerge as “lowest” responsive bidder and secure the contract.

The companies wrote $15,000 worth of checks to the mayor’s electoral committee, according to state election board records.

Tagged to the Dynis bid is a proposal by Grant Capital Management to provide $185 million in financing to the city to underwrite its meter contract.

J.P. Grant, founder and owner of Grant Capital, was identified as the largest single campaign contributor to the mayor, coordinating $38,500 in donations through eight parties, including his wife, his, brother-in-law, members of his firm and the company itself. 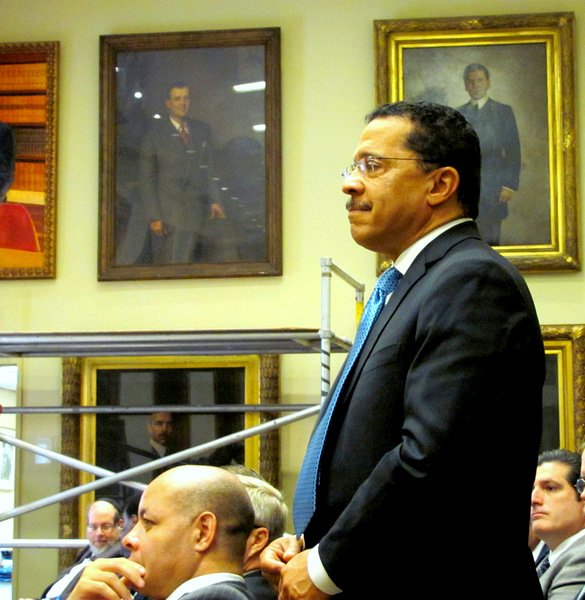 J.P. Grant stands at the Board of Estimates to accept the mayor’s praise for agreeing to organize the Grand Prix in 2012. (Photo by Mark Reutter)

Grant has also made generous campaign contributions to the two other elected officials on the Board of Estimates – City Council President Bernard C. “Jack” Young and Comptroller Joan M. Pratt.

Grant came to the mayor’s aid in 2011 to save the Baltimore Grand Prix and ran the race for the last two years. The city has agreed to suspend the race next year, officially because of scheduling conflicts in the Inner Harbor, but unofficially to end the financial losses racked up by Grant’s Race On organization.

Since the public bids were opened on September 25, the Dynis group has secured the services of Gallagher Evelius & Jones lawyer Ryan Potter and KO Public Affairs, founded by the Gov. Martin O’Malley’s former spokesman Steve Kearney, to push the contract forward in the city bureaucracy and gain favorable notice in the local media. 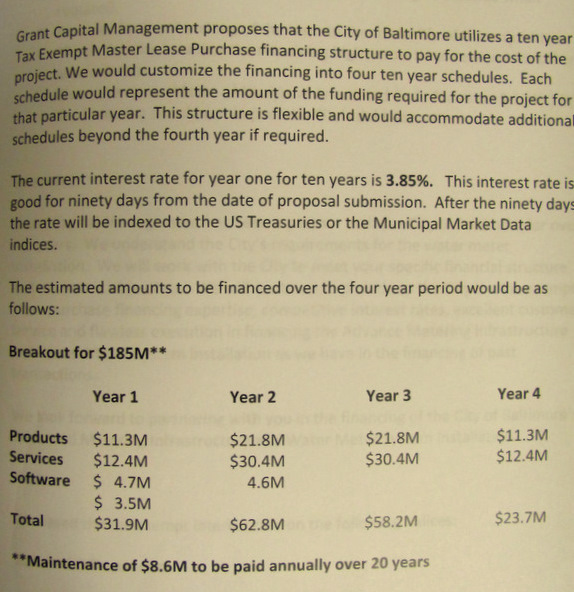 During yesterday’s press conference, Mayor Rawlings-Blake reiterated that the problem of inaccurate water bills “starts and ends at the meters.”

She said that new the metering system – officially known as the “advanced meter infrastructure and water meter system” – would provide timely and accurate meter readings because the meters would no longer be read by meter readers.

The mayor said it hasn’t been determined if the city will retain meter readers once the new system – which will entail the radio transmission of meter readings to a central office – is in place.

Under the current contract, Dynis or Itron will be responsible for installing 404,000 “smart” meters with radio transmitters.

In addition, the contractors are responsible for installing about 380,000 composite water meter covers (to replace the current cast-iron lids that would block radio transmissions) and a new Meter Data Management System (MDMS) capable of storing hourly readings from all meters in the system.

The project is scheduled to begin after the awarded contractor completes a “proof of concept” of its technology that meets city standards. The project would be coordinated with seven ongoing water pipe contracts in the city – and require the installation of new billing-system software to integrate with the MDMS data network.

In short, the project is a much larger version of the city’s speed-camera program that has laid dormant for the last six months because of technical glitches and inaccurate citations to motorists – due to “human error” in programming and execution, the city Transportation Department says.

Yesterday, Mayor Rawlings-Blake said that the vendor, Brekford Corp., “is not there yet” in testing the system, which includes 72 new speed cameras that the city purchased for $2.2 million but has yet to put into service.

In the case of the smart meters, if all goes according to schedule, the new system would be fully completed and operational in 2018.