We recently wrote about the proclivity of a city office bearing a Halloween-ish acronym (MWBOO) to deep-six low bidders on municipal contracts by finding small errors in the paperwork regarding minority participation.

We called on Mayor Stephanie Rawlings-Blake and the Board of Estimates to make some simple fixes to rectify the problem – and reduce unnecessary expenditures.

This week the board did just that.

The board unanimously overruled the Minority and Women’s Business Opportunity Office (MWBOO) and granted a protest allowing the low bidder to win a repair contract despite a small paperwork glitch. Savings to taxpayers: $86,906.

After the vote, the mayor downplayed the significance of the decision, saying it was just one case, but Arnold Jolivet, managing director of the Maryland Minority Contractors Association, proclaimed: “This is big.”

The High Cost of Nitpicking

Jolivet has long argued that nitpicking by MWBOO results in low bidders being passed over for city contracts. Such rulings rarely benefit minority contractors, Jolivet argues, while adding significantly to the costs of city government.

In the two cases we detailed recently, MWBOO rejected the low bidder (a minority contractor) for seemingly minor infractions and recommended the second lowest bidder. The mayor and board accepted MWBOO’s reasoning – and taxpayers paid $1,186,320 extra for the work.

This week a different scenario unfolded when Highlander Contracting Co. protested the award for underground conduit repairs to Allied Contractors, whose bid was higher. 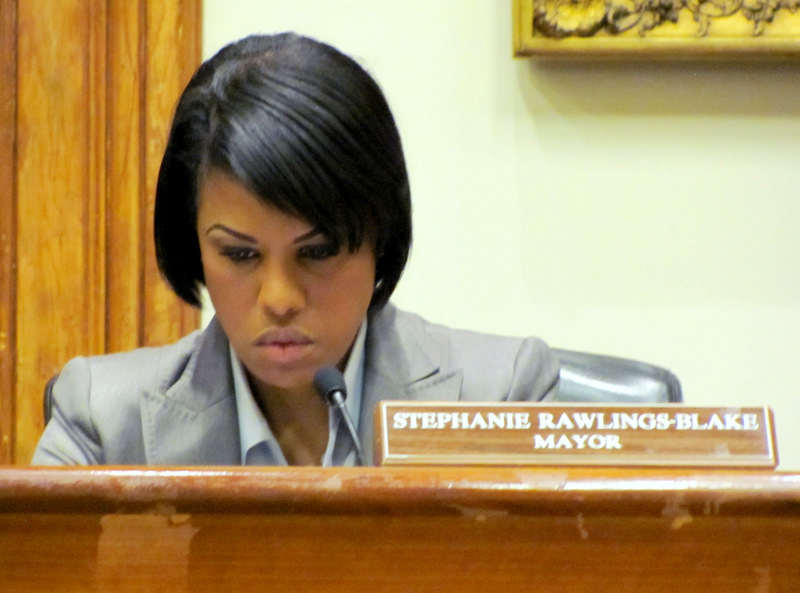 Mayor Rawlings-Blake was silent but not unaware of the unfolding drama at Wednesday’s board meeting. (Photo by Mark Reutter)

Thomas B. Corey, chief of MWBOO, came before the board to argue that Highlander’s failure to place a dollar subcontract amount on Part B of the minority participation form constituted a “material defect” in its bid.

Four Corners of the Document

Robert Fulton Dashiell, Highlander’s lawyer, called the omission a “procedural error” and noted that the dollar amount was listed on Part C of the form.

Typically at this point, City Solicitor George Nilson calls on the board to dismiss the protest and affirm the award to the higher bidder. But on Wednesday Nilson closely questioned Corey, asking why the dollar figure in Part C couldn’t and shouldn’t be applied to Part B.

Corey replied that it was the longstanding practice of his office “not to go beyond the four corners of the document.” As Nilson questioned the logic of this practice, the mayor looked solemnly at Corey on the other side of the board’s high wooden dais and the Allied Contractors team fidgeted but said nothing.

Nilson then called for a vote to grant the Highlander protest and all five board members, including the Mayor, City Council President Bernard C. “Jack” Young and Comptroller Joan Pratt, voted “aye.”

The Allied team started to protest, but Young cut them short, saying the vote had been taken. They quickly left the board room, with one member growling, “No comment,” to an inquiring reporter.

Robert Dashiell, meanwhile, looked as shell shocked as Corey. The attorney for the Harris Jones & Malone lobbying firm quickly gained his composure, however, and jovially backslapped a Highlander representative still standing at the dais.