Following weeks of behind-the-scenes maneuvering at City Hall, the Board of Estimates is on the verge of awarding the controversial “smart” water meter contract to the low bidder – rejecting a $100 million higher bid backed by political supporters of the mayor.

The Bureau of Purchases officially recommended this afternoon that the spending board approve a $83.5 million bid by industry giant, Itron Inc., bypassing Dynis LLC, which bid $185 million for the same work.

The Itron award would be divided into a $81.4 million award to start the implementation of the smart meter program, with an additional $2.1 million allotted in 2015 for maintenance funds.

Dynis was backed by J.P. Grant, who “bundled” the largest amount of campaign contributions to Stephanie Rawlings-Blake in 2011 and was later tapped by the mayor to run the Baltimore Grand Prix.

The Columbia-based financier proposed to arrange lease purchasing financing for the city to pay the $185 million Dynis proposal – and collect a full percentage point of interest above the Itron financing plan.

Other members of the Dynis team – including company founder Earl Scott and Parking Authority of Baltimore City chairman Peter Auchincloss – donated nearly $20,000 to the mayor’s run, according to state election board records.

Several members of Dynis team openly bragged that they were “guaranteed” to win the contract, despite its much higher cost.

Earl Scott is founder, president and CEO of Dynis LLC.

After The Brew reported these arrangements, the mayor issued a written statement saying she had not been involved in the water meter contract, but would not comment on the process so as not to compromise the integrity of a “live procurement.”

Although Columbia-based Dynis has no direct experience in water meter installation, it emerged as the frontrunner last July.

The small cell tower repair company was permitted to bid on the contract, replacing Sensus Metering System, a large North Carolina concern that was prequalified to bid along with Itron and Aclara Technologies. (Sensus became a Dynis subcontractor.)
_______________________________
FULL COVERAGE IN THE BREW

The law department rejected the Aclara bid as “non-responsive” because it allegedly placed unacceptable conditions on the city. The Brew reported that Aclara’s $80 million bid – never officially opened by the city – was the lowest of the three. 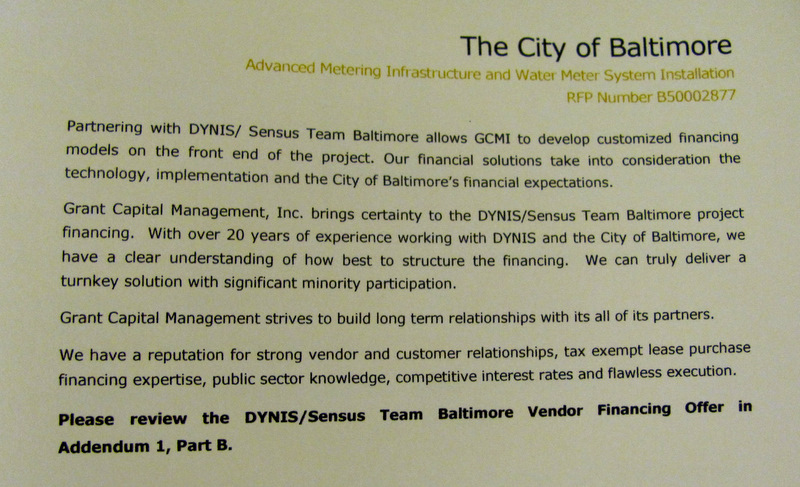 J.P. Grant would benefit by acting as the middleman to finance the cost of the “smart” meter installation. (Dynis bid documents)

The duel between Dynis and Itron for the lucrative contract heated up in the last month when Ryan Potter, a lawyer for Gallagher Evelius & Jones, and KO Public Affairs, founded by Gov. Martin O’Malley’s former spokesman Steve Kearney, were hired to represent both the company and Earl Scott.

Jones and her lobbyist partner, Sean Malone, were married by Mayor Rawlings-Blake at a Las Vegas ceremony attended by leading local and state officeholders.

As of 4 p.m. today, Dynis had not filed a protest to the contract recommendation with the secretary of the Board of Estimates.

The award is scheduled to be heard by Mayor Rawlings-Blake and four other members of the board on Wednesday morning.