UPDATE 10:45 a.m. – With just one abstention (Comptroller Joan Pratt) the Board of Estimates approved Itron’s bid on the high-stakes water meter contract. The vote came amid objections by Dynis, whose bid was fully $100 million higher than Itron’s.

Dynis attorney Paul Caiola argued before the board that Itron’s bid is “too good to be true.” But City Water Chief Rudolph Chow said Itron is committed to staying within its bid price of $81 million and the contract would not increase unless the city needed more than the specified number of water meters.

After the vote, Dynis CEO Earl Scott left without comment.

Dynis LLC is asking Mayor Stephanie Rawlings-Blake and the Board of Estimates to delay award of a controversial water meter contract this morning and allow Dynis to “re-price” its proposal, which is currently $100 million higher than its sole competitor.

The company said “substantial flaws” in the city’s procurement process and erroneous prices submitted by its competitor led to the unfair rejection of its bid by the Bureau of Purchases. 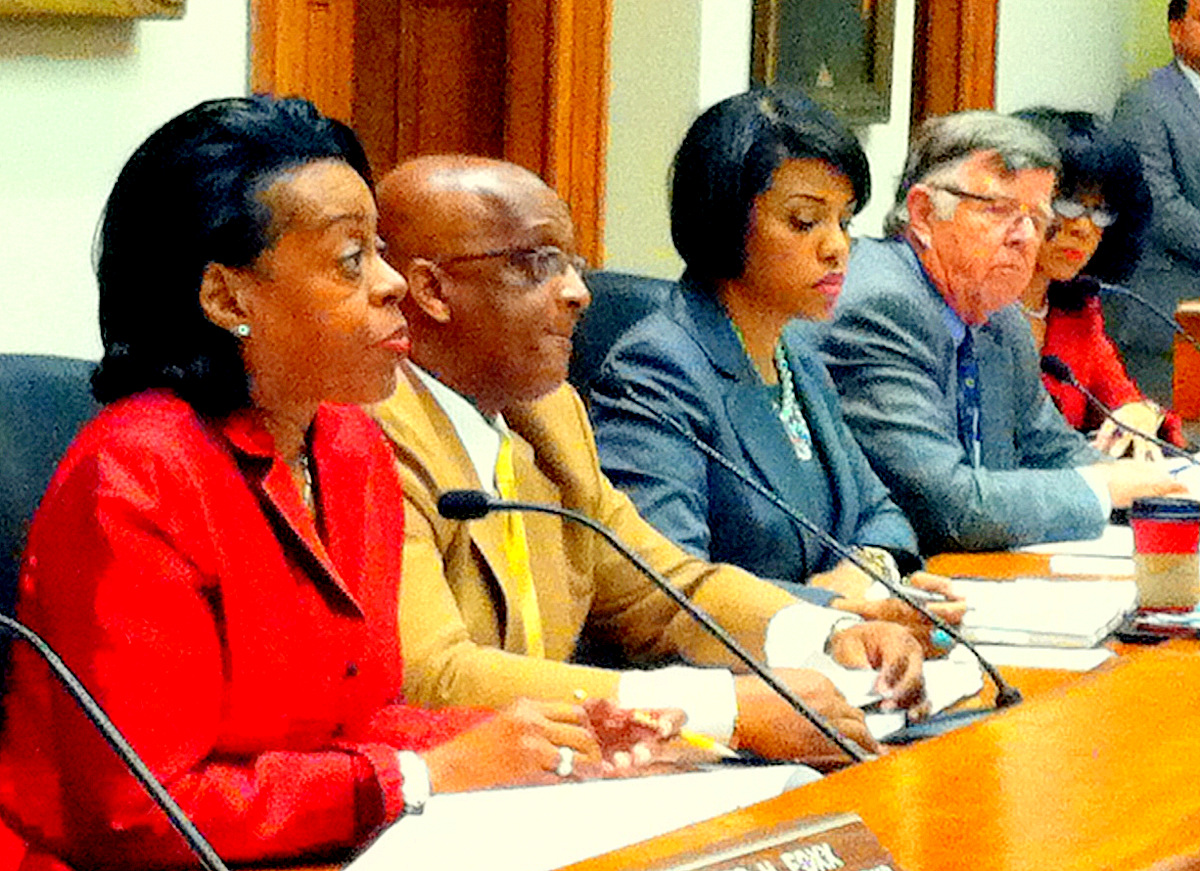 Joan Pratt, Jack Young, Stephanie Rawlings-Blake and George Nilson at today’s meeting of the Baltimore City Board of Estimates. (Photo by Mark Reutter)

At the same time, a campaign to rally media support to delay the award added a new level of intrigue to the battle between Dynis, a small Columbia cell tower company with big political backers, and Itron, a water industry giant from the West Coast.

Dynis’ position that the mayor should delay the award was echoed yesterday in an editorial by The Baltimore Sun, which had not earlier weighed in on the matter.

The Brew received more than a dozen comments from multiple commenters yesterday calling for a delay in the contract and/or trashing Itron. They all came from an encrypted email service – hushmail.com – and were traced back to a single IP address in southern Pennsylvania.

KO did not respond to a request by The Brew to describe its current public relations campaign on behalf of Dynis.

The mayor’s top campaign contributor, J.P. Grant, is allied with the Dynis bid. He is seeking to win a lease financing contract with the city to underwrite the $185 million price tag submitted by Dynis.

Dynis CEO Earl Scott and his subcontractors poured nearly $20,000 into Rawlings-Blake’s 2011 run for mayor. The group has openly bragged that they were “guaranteed” to win the meter contract, an insider with knowledge of the behind-the-scenes maneuvering at City Hall told The Brew.

“They’re now trying to put the genie back in the bottle,” the source added yesterday. 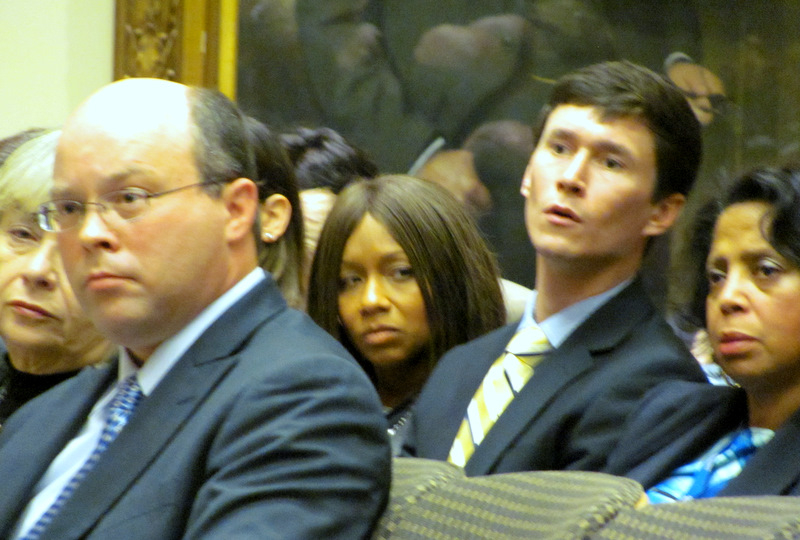 Itron is not without its own political clout. While the Liberty Lake, Wash., company did not contribute by name to the mayor’s campaign fund, it hired superlobbyist Lisa Harris Jones to represent its interests.

Jones is considered City Hall’s top lobbyist and is a close friend of the mayor’s. Last May, Mayor Rawlings-Blake officiated at her wedding in Las Vegas to her lobbying partner, Sean Malone.

Yesterday, Jones refused to comment on the contract or Dynis’ allegations. “This still being an active procurement, Itron has no comment,” she said.

Up to the Mayor

Mayor Rawlings-Blake has said she has recused herself from the meter procurement process and has declined to answer questions about the contract except to say that it would benefit Baltimore ratepayers by ending meter reader errors.

Today, however, the meter contract comes squarely before her – and her decision to approve, disapprove or delay the award will sway the board’s action because she controls three of the five board seats.
________________________________
FULL COVERAGE IN THE BREW

The unusual request by Dynis to start the water meter procurement over again and allow it to “re-price” its bid came in a 12-page letter sent to City Solicitor George Nilson – with copies to the mayor’s top deputies, Kaliope Parthemos and Khalil Zaied.

Caiola charged that the Itron meter system would cover only 26% of Baltimore County with remote-signaled “smart” meters. This would leave county residents with “legacy technology and no attractive vehicle to upgrade in the future.” 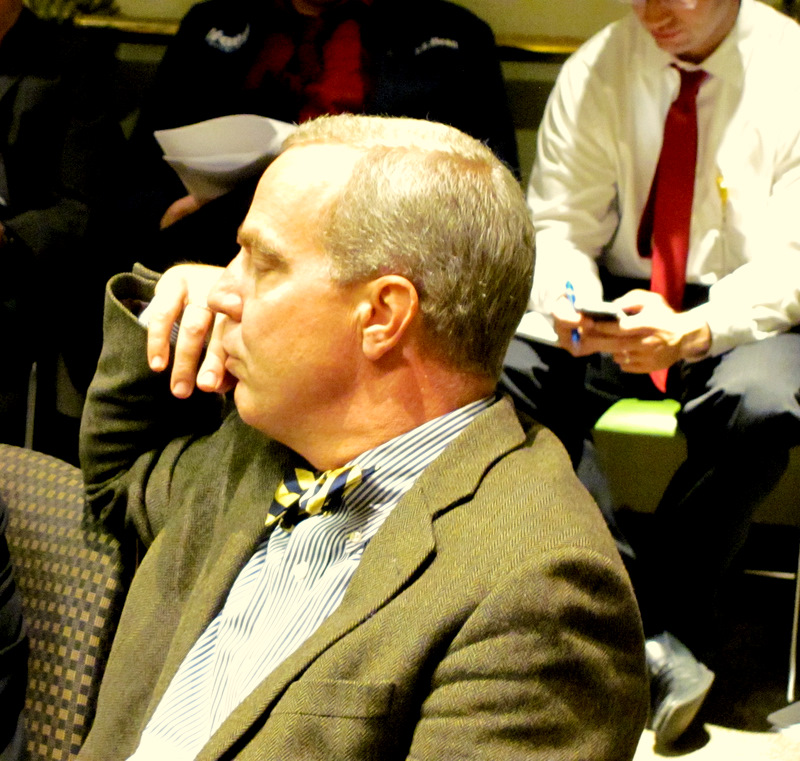 Peter Auchincloss, a member of the Dynis team and chairman of Baltimore’s Parking Authority, at board meeting. (Photo by Mark Reutter)

Not stated in the letter is that such limited coverage is what is specified in the contract.

That is because Baltimore County opted not to install an “advanced meter infrastructure” except in localized areas, and instead will continue to employ meter readers using “advanced” computerized equipment. The county essentially decided to go with a more low-tech metering system.

Caiola also said that Itron failed to complete a pilot project for smart meters in Baltimore 10 years ago and was unable to deploy an “effective” smart meter system in Houston.

“Given its prior performance in Baltimore and elsewhere, the City should, in a measured and deliberate fashion before awarding the bid, investigate whether Itron can and will complete the work in a satisfactory manner at the current price, if at all,” Caiola said.

The lawyer’s points were echoed in the comments received by The Brew yesterday. 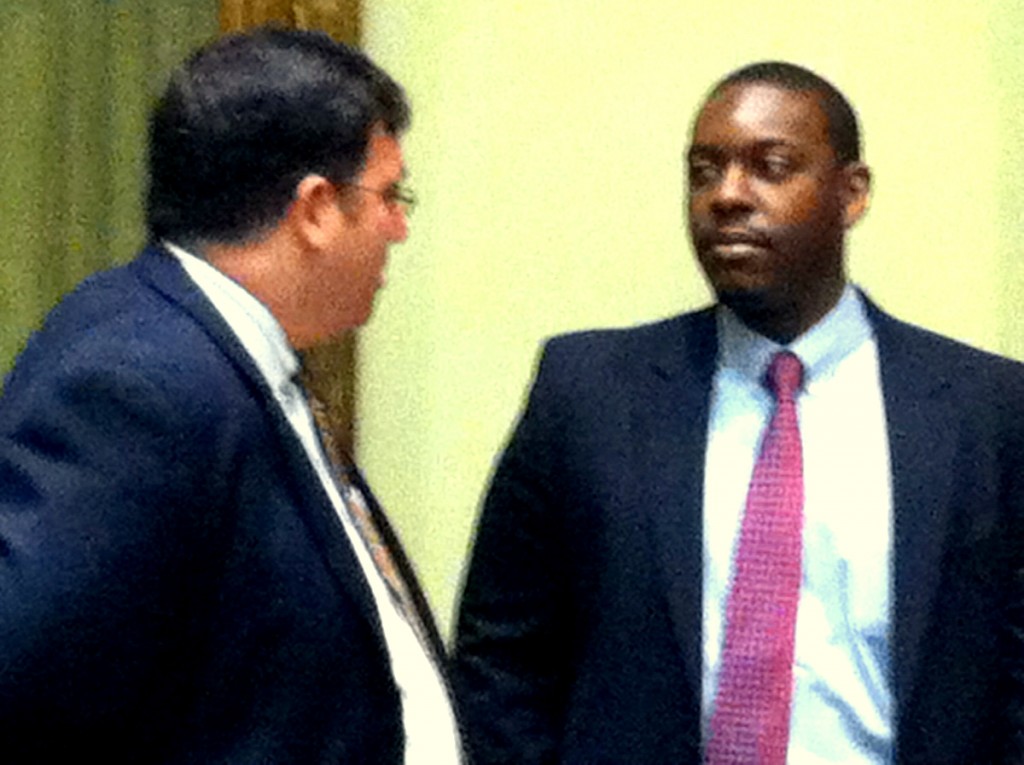 One commenter said, “I gave the Brew some good information about Itron not completing the work and back charging Cities for millions of additional dollars. For some reason the Brew isn’t digging into this. Maybe the SUN will get the story right.”

Another commenter said: “It sounds like there are still alot of questions to be answered with this. I don’t understand why us folks in the county are not getting the same thing as everyone in the city. I think we need to take the time for alot more discussions about this before the contract is awarded.”

The comments came through “hushmail.com,” a website that offers encrypted email with unlimited aliases. All had the same IP address, as did  several comments with a different email ending.

The Brew has no record of receiving comments that used hushmail until yesterday.*

* Just found two exceptions to that last statement, comments previously sent to us via hushmail, including one from Oct. 28 on this water meter story.