Before presenting a smorgasbord of possible new features for Baltimore’s Inner Harbor – an urban beach and floating swimming pool in a barge, a kayak launch, a pedestrian swivel bridge that would allow for tall-ship passage  – a group of business, tourism and political leaders first explained why they think the city should have an appetite for it.

“We’ve allowed the Inner Harbor to become stale, almost as if it’s in a time capsule,” said Donald C. Fry, president and CEO of the Greater Baltimore Committee, speaking at the Visitor Center yesterday, with ships’ masts and a smattering of passersby visible behind him.

Visit Baltimore CEO Tom Noonan said the city needs to “maintain the freshness” of the complex of shops, restaurants and attractions formed in the 1970s from the city’s onetime working waterfront.

“Where you used to see fruit stands and a fish market, now you see the Four Seasons” and other hotels, Noonan said, lauding the transformation. “That’s great!” 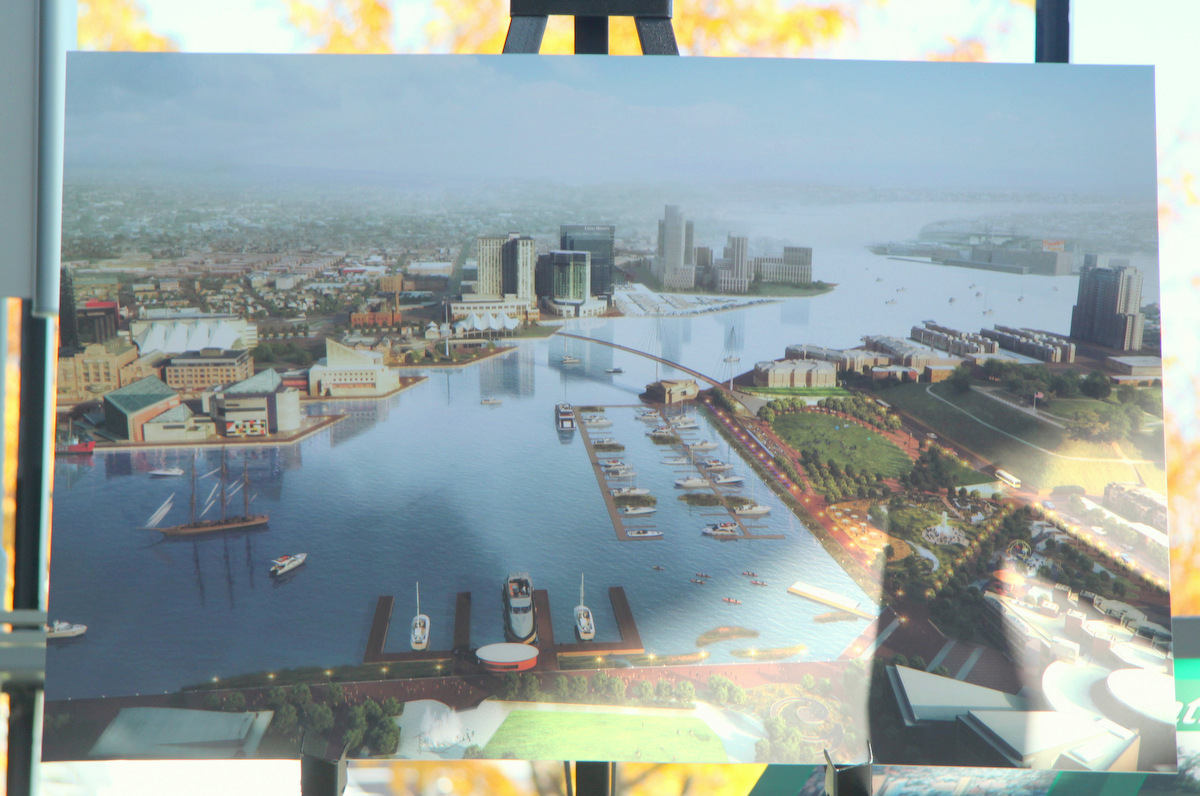 The news conference for “Inner Harbor 2.0” was about to break up when a reporter asked if they would take a question: Is there a cost estimate and a timetable?

Not at this point, according to Laurie Schwartz, executive director of the Waterfront Partnership.

Funding, she speculated, would likely come from a mixture of public, private and philanthropic sources. “We’re putting that plan together now,” she said.

Those inclined to look kindly on such civic betterment plans might call yesterday’s Inner Harbor concept “aspirational.” It’s the latest of many.

There was the 1995 proposal by a Nevada casino company to bring in gaming and build “a world class roller coaster” at the Inner Harbor.

In 2006, there was the proposal by two brothers for a ski-lift style gondola carrying tourists up and down the harbor. (A $38,000 partly state-funded study analyzed ridership statistics.) 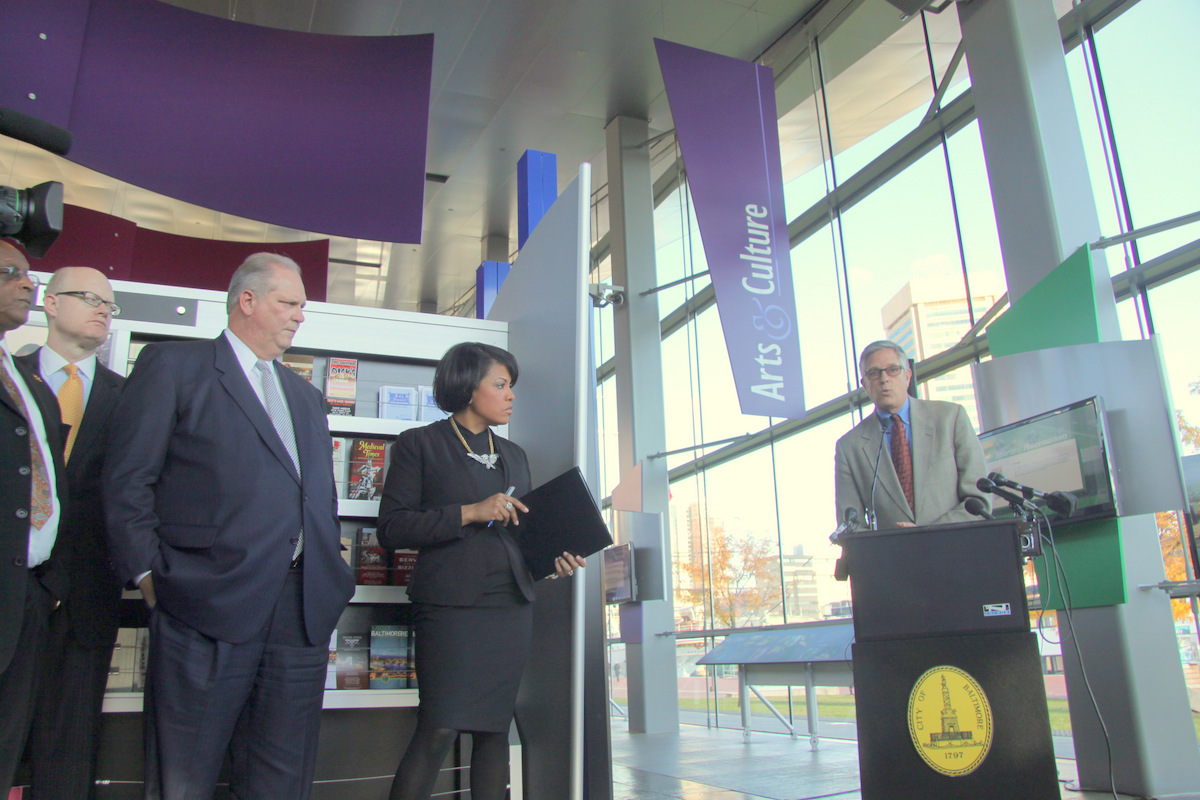 The GBC’s Fry has been pushing for the Inner Harbor facelift since at least 2011, when he unveiled a proposal for a pedestrian bridge connecting Rash Field to Pier 5, a Vegas-style sound-and-light show, a new waterfront park at Rash Field and other massive makeover plans, along with an even more massive project – building a new Convention Center and Arena at a cost of nearly $1 billion.

Yesterday it fell to Adam Gross, a principal at Ayers Saint Gross, to describe this latest one in detail. His planning firm, he said, looked at other cities to see what they have done – Brooklyn Bridge Park, Battery Park, Seattle’s waterfront and Chicago’s Millennium Park.

They wanted to take the design principles behind “good areas” at the Inner Harbor, such as Pierce’s Park, West Shore Park, the National Aquarium, and apply them to the less-good rest of the waterfront, he said.

There are safety, quality, disability access and appearance problems with the promenade, said Gross, whose firm lead the process and produced the 70-page report.

He spoke of how floating wetlands (such as the ones already in place near the World Trade Center) could be used to “soften” the water’s edge and create “a green ribbon” and “jeweled thread of a necklace” around the Harbor from Canton to Fort McHenry. 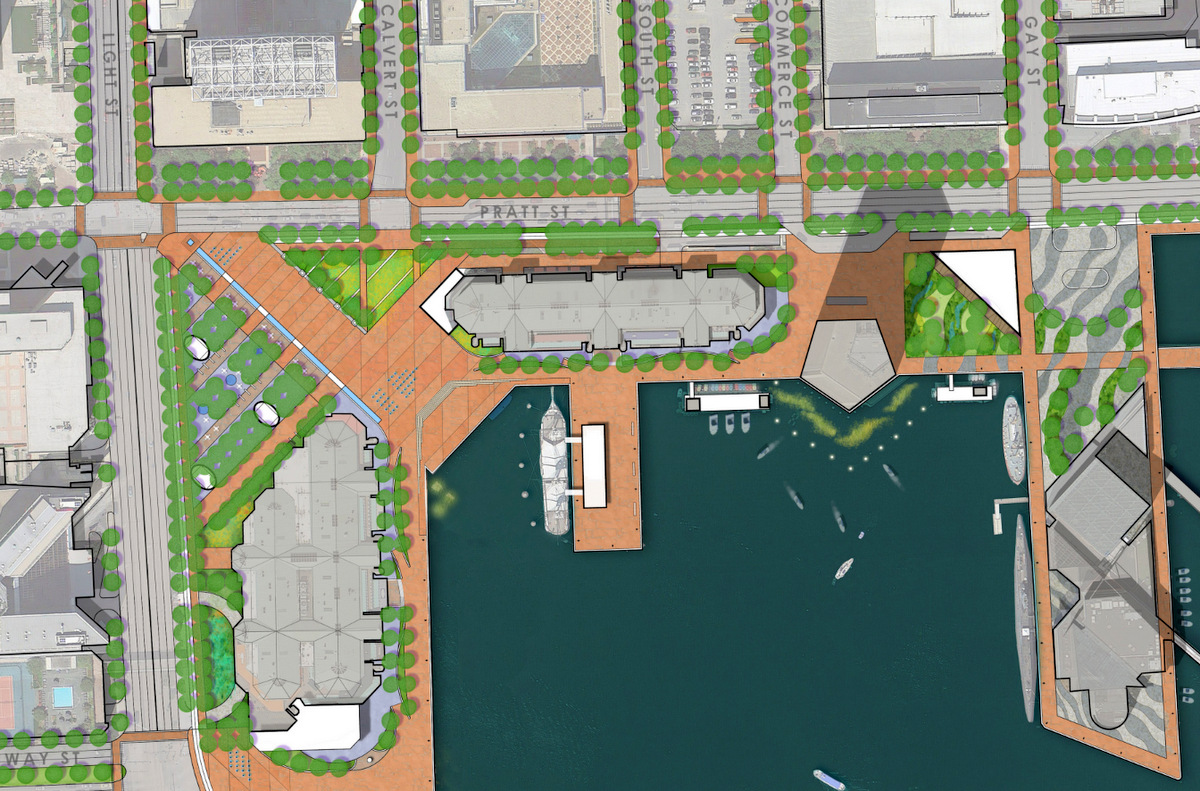 Rash Field was described as “a sad place, in terrible shape,” and their proposal for its makeover – a new civic park – would include a playground, free concerts and movies atop a 350-space underground parking garage.

The Harborplace amphitheater would be expanded and McKeldin Plaza would get a facelift as well, with new space created by eliminating Light Street’s curving connection to Calvert Street and replacing it with a 90-degree-turn intersection at Pratt Street.

Unattractive parking areas near the Rusty Scupper and Rash Field would be eliminated.

Gross described a bike-share station at West Shore Park, the playground, kayak launch and “beach” at “Rash Field Park” where people could “lay out in the sun” and, on the other side of the harbor, at Harbor Point, enjoy new parks and public places.

Think of the Children

Heavy emphasis was placed yesterday on the idea that the makeover would benefit neighborhoods, attract new residents and provide amenities for families who are already live in the city.

“I hate when I hear that people fall out of love [with Baltimore] because they can’t reach their fullest potential here,” said Mayor Stephanie Rawlings-Blake, whose declared goal of attracting 10,000 new residents has been a lightning rod for critics who say she mistreats those already here.

“Longtime residents will find a renewed sense of excitement” with the improved Inner Harbor, Rawlings-Blake predicted. 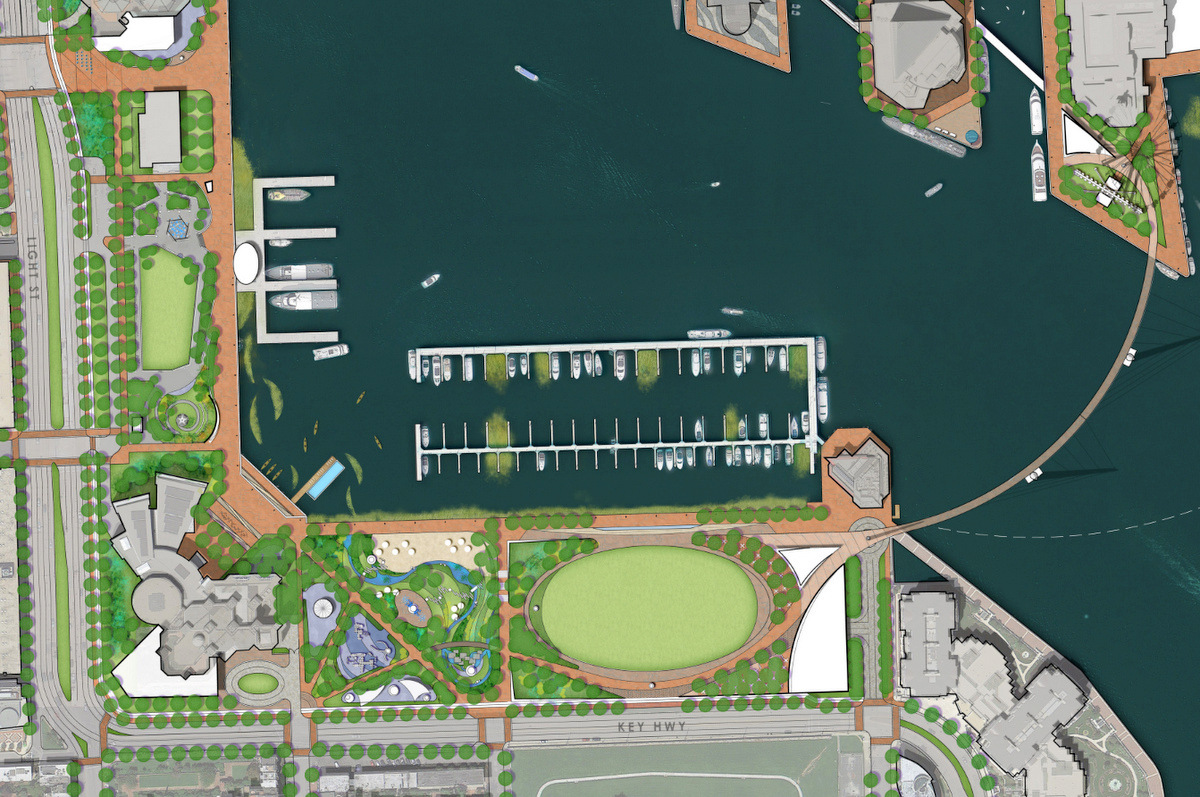 Schwartz said there are 21,000 children under the age of 15 within a half a mile from the harbor, as she introduced “a mom who lives downtown in Otterbein.”

Families who live downtown “don’t have backyards – this is our backyard,” said Judy Chung O’Brien, president of the Downtown Baltimore Family Alliance.

The mayor nodded vigorously as O’Brien said the Inner Harbor 2.0 plan would keep families in the city as well as support the mayor’s goal of attracting 10,000 new residents.

Speaking afterwards to The Brew, Gross said he thinks the Inner Harbor makeover would urbanize the Inner Harbor. “One of the failures of the original plan is that it is very suburban,” he said.

There was next-to-no discussion yesterday about how the new plan could better connect the harbor tourist zones to downtown streets or reduce the car clutter on Pratt Street, a subject The Brew has often discussed (here and here, for example).

Currently, the Pratt and Light street pavilions present their back-side to the city, with dark service entrances and delivery trucks unloading there.

As for the likelihood that any of this will ever happen, Gross gently alluded during his remarks to the fact that the proposal would be expensive – “a heavy lift” to use his description. 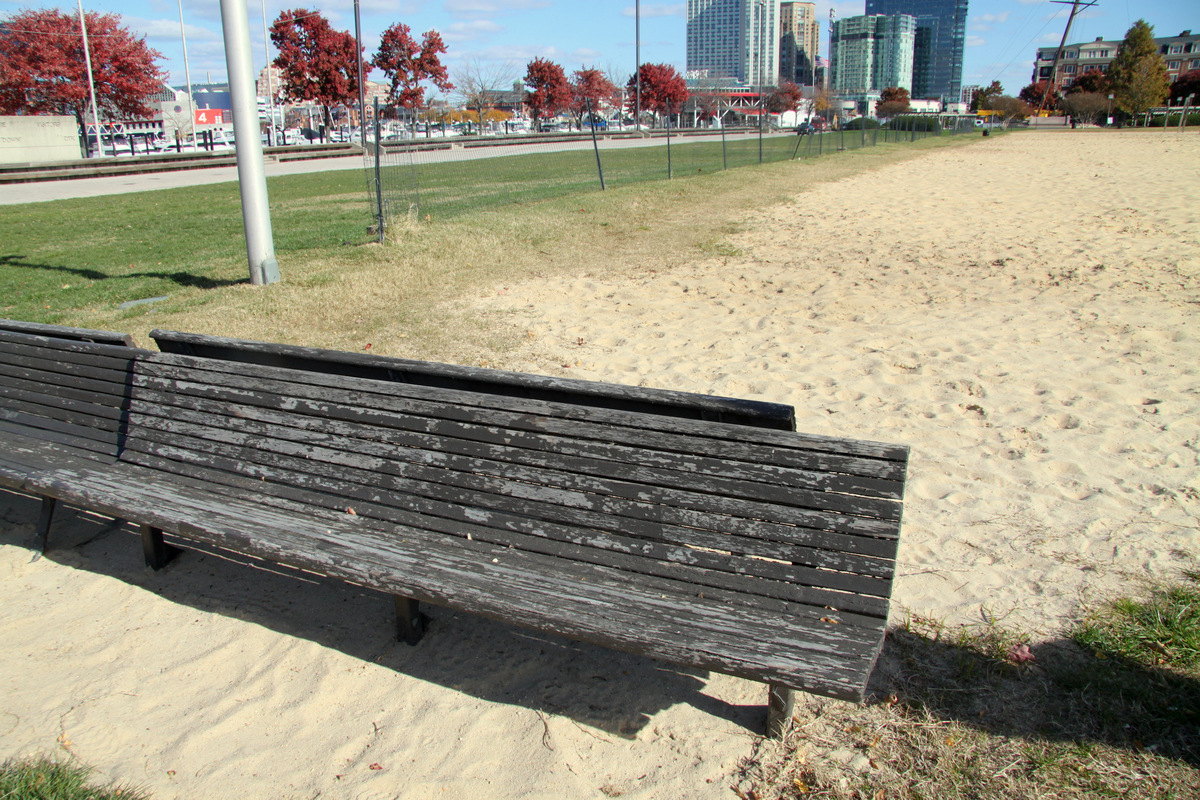 A bench at Rash Field yesterday. (Photo by Fern Shen)

“A lot of things are far out in the distance,” he said. “We really want to start with the things we can do now, like infrastructure.”

Asked later to elaborate, he said, “Painting and basic repairs of benches and light fixtures. There are like 10 different kinds of light fixtures!”
____________________
PART 2, to come later today:
“Beyond the bubble: The scene outside the Visitors Center.”