Just as we were getting used to the idea of “smart” water meters and their hefty price tag, up pops a contract for “smart” garbage cans.

The Board of Estimates yesterday approved a $578,000 pilot program for the manufacture and delivery of 9,250 garbage cans equipped with RFID (radio frequency identification) tags to two inner-city neighborhoods.

City Hall’s aims for these 65-gallon containers are downright lofty – not just to be safe from marauding can thieves courtesy of embedded computer chips or bar codes, but also to improve garbage management by monitoring individual can usage, reduce rat infestation, ease alleyway litter and promote recycling and sustainability.

If the pilot proves a success – something that won’t be known for about 18 months – the city wants to wheel out smart cans to the remaining 190,000 household users.

The new cans are being touted not only for their smarts and sustainability, but for their aesthetic appeal.

Toter LLC of Statesville, N.C., is pushing the city to order rollout carts clad in a special plastic that resembles granite.

The vendor describes such carts as “the most upscale look, just like granite counter tops.”

“Cities and their residents love Toter ‘Granite’ colors,” the bid proposal says, going on to describe a number of special treatments, such as “Toter Green Granite,” before appealing to city officials to aspire even higher. 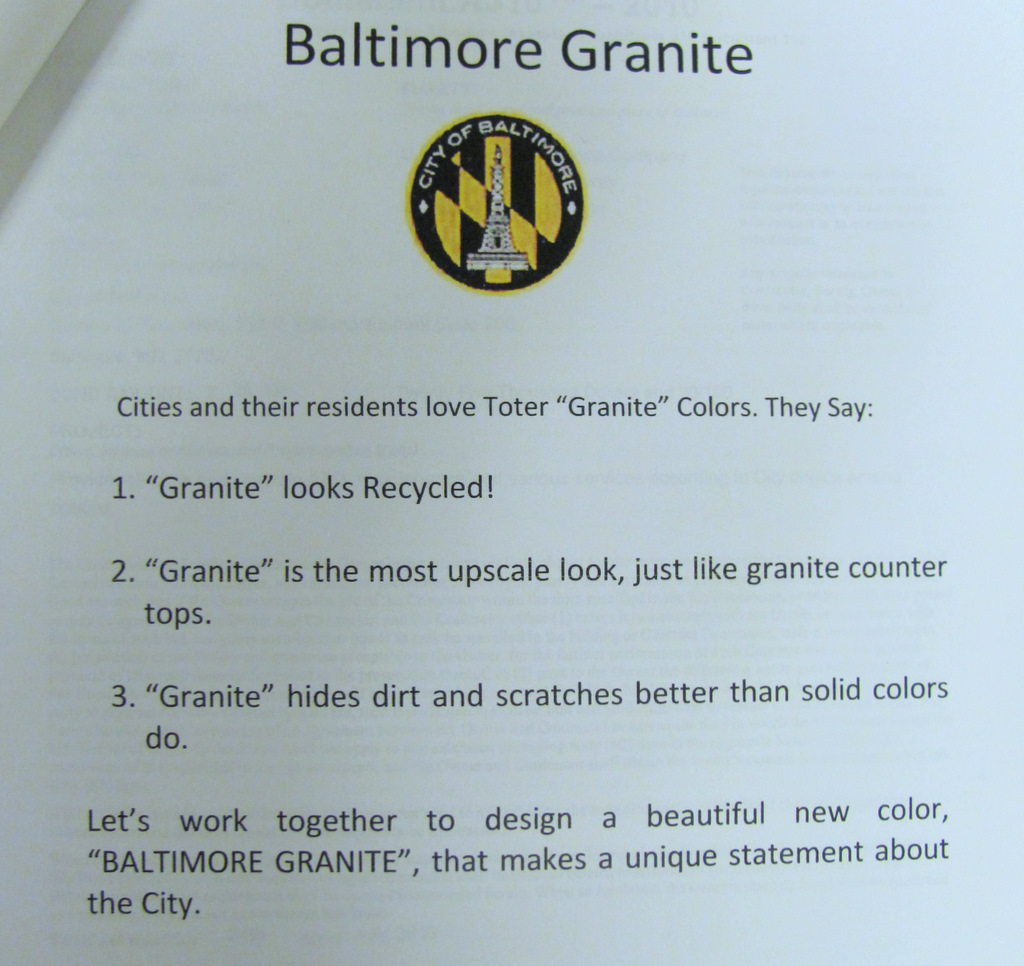 “Let’s work together,” the bid proposal suggests, “to design a beautiful new color, ‘BALTIMORE GRANITE,’ that makes a unique statement about the City.”

As in the case of the tracking technology, the city hasn’t yet settled on any specific color or treatment. But the Bureau of Solid Waste has decided what neighborhoods will receive the cans for testing, which could begin as early as next March.

The bulk (6,601 cans) will be delivered to households in Belair-Edison and the adjoining Four-by-Four community east of Clifton Park.

A smaller contingent (2,552) will be assigned to dwellings around Mondawmin Mall, including Parkview/Woodbrook and Burleith/Leighton.

Residents will be asked to use the cans for all their garbage disposal needs. Accompanying the cans will be 25-gallon bins to be used for plastic, paper, bottles and other recyclable trash.

By supplying free containers to all residential addresses, the city’s garbage chief, Valentina Ukwuoma, hopes to curtail the age-old Baltimore practice of tossing garbage into the alleys, sometimes in plastic bags, sometimes not. 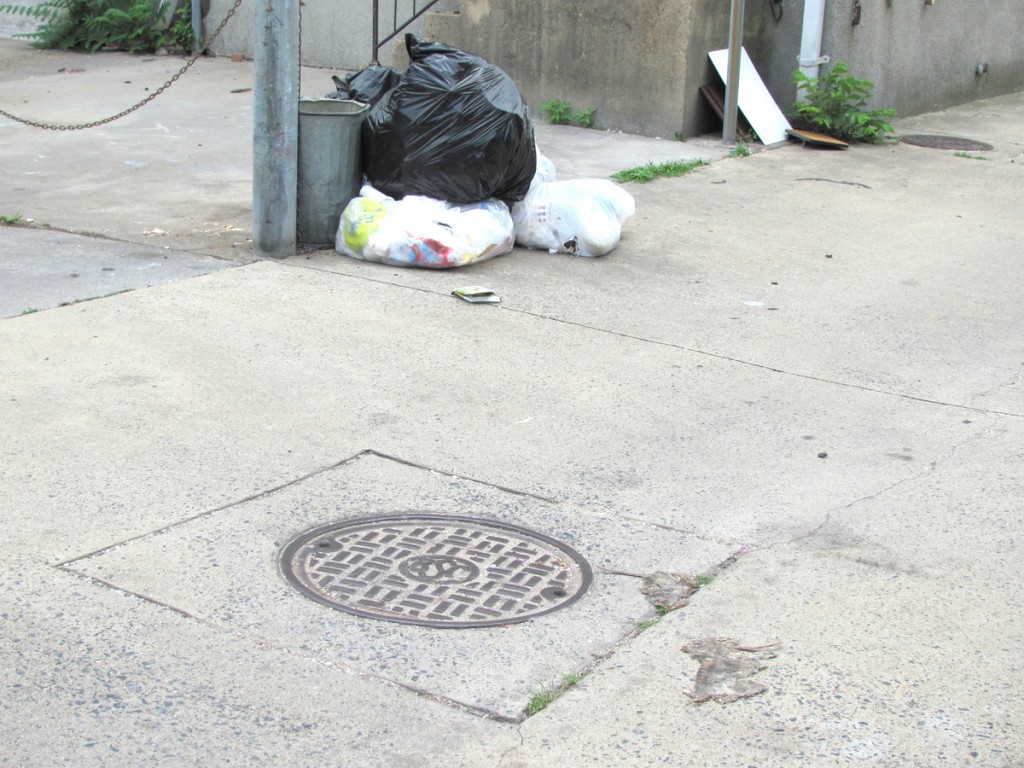 The cans will sport grabber bars to allow sanitation workers to set the containers on metal lifts to raise and dump the contents into the truck – another innovation pushed by Ukwuoma.

The city will equip 11 of its 91 garbage trucks with such can-grabbing devices, at $5,000 per installation.

The “automated” collection system is designed to increase the efficiency of pickups and decrease the number of workers’ compensation claims arising from employees injured while lifting cans or tossing bags into the trucks.

The roll-out carts will also make it easier for citizens to maneuver than traditional waste containers, the city says.

The lift system has been tried, with varying degrees of success, in smaller cities. In Toledo, high-tech pickups were abandoned after a flurry of logistical snafus and citizen complaints.

A key factor in making the system work is the placement of the carts at the right spot for pickups. The narrowness of many city alleyways will add to the logistical challenge. 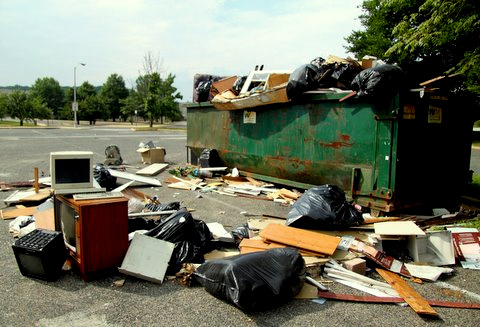 The two communities under test generally have alleys 13 feet and wider. Solid Waste says its pilot program will include literature on the do’s and don’ts of smart garbage collection.

Anger at Board of Estimates

The pilot program was not without its melodrama yesterday.

Two bidders who lost the contract, Otto Environmental Systems and Rehrig Pacific Co., angrily protested before the spending board, while Arnold Jolivet, executive director of the Maryland Minority Contractors Association, denounced the process as “corruption at its worst.”

The parties charged that Toter was not the low bidder, but that the Bureau of Purchases had recalculated the company’s price to arrive at its recommendation for the award.

Reviewing the bid records, The Brew found that the low bidder was IPL Inc., a Canadian company, followed by Rehrig Pacific (whose bid was rejected as “non-responsive” by the Law Department), followed by Toter and Otto Environmental.

But the direct bid prices were not used by the Bureau of Purchases.

Timothy Krus, the agency’s head, told the board that the bid prices were recalculated based on the city’s needs for the pilot program and the cost of maintenance of the cans.

The recalculations resulted in Toter’s bid being recommended as the lowest price subject to the vendor coming into compliance with the city’s MBE/WBE (minority and women’s business) goals, Krus said.

Krus said that Toter’s “MBE/WBE dollar amounts and percentages are mathematically inconsistent with the bidder’s price,” and its WBE selection, Pengiun Staffing, was not certified with Baltimore City.

After debate was cut off by City Council President Bernard C. “Jack” Young, the spending board approved the contract, 4-0, with Comptroller Joan Pratt abstaining.