What a difference a social media campaign can make.

A month ago, community activist Kristerfer Burnett dispatched into cyberspace a video exposing the sad state of the Edmondson Village Shopping Center in West Baltimore.

The YouTube clip he made (see below) showed ample evidence not just of neglect but dangerous conditions at a facility that once housed quality retail stores and was affectionately known by local residents as “The Village.”

Trash overflowing from dumpsters, broken light fixtures, a severely bent beam holding up a store awning, crumbling brick walls, potholed streets and an open storm drain big enough to swallow a child were among the signs of physical distress and deterioration at the center.

Burnett and his allies set up a Facebook page (repairtheshoppingcenter) and followed up with an on-line petition and another YouTube clip of customer concerns (set to Marvin Gaye’s Inner City Blues), email blasts and a “community walk” through the facility by fed-up residents.

The result: the first evidence of basic repairs and improved sanitation at the facility, according to community leaders, as well as the stirrings of involvement by long-quiescent politicians. 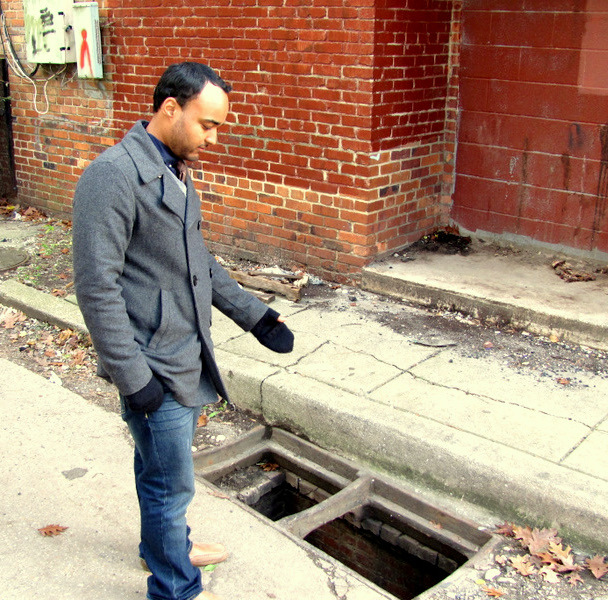 Kris Burnett points to an open storm drain on November 12. BELOW: Cynthia Shaw and Monique Washington look at the grate installed in time for the community walk. (Mark Reutter)

City Councilwoman Helen L. Holton, who has represented the district since 1995, says she is pressing the center’s owner, Ira Miller, to meet building code standards by mid-December or else face fines by the housing department and solid waste inspectors.

“I have made it very clear that they have marching orders to clean up,” Holton said in an interview.

She blamed the poor economy for making it difficult for the Miller group to make the necessary improvements.

Del. Samuel I. “Sandy” Rosenberg (41st District) has also communicated with the activists, saying he, too, wants The Village cleaned up.

Asleep at the Wheel

“I think everybody’s been asleep at the wheel – the public, the officials, the shopping center owner, the code enforcement people, the police,” said Burnett, who hit upon the social media idea after trying for more than two years to get Miller to respond to community complaints.

Attempts by phone and email to reach Miller, a commercial real estate broker, were unsuccessful.

Melissa O’Brien, director of operations for Miller Investments, said she was generally unaware of complaints about the shopping center.

“Who exactly are the people talking to you?” she asked. “I mean, we’ve already done a ton of stuff. We’ve got proposals signed and the [storm drain] grate has been fixed,” she said before explaining that she was not authorized to talk further.

“For any kind of publicity, the owner speaks for himself,” O’Brien said. 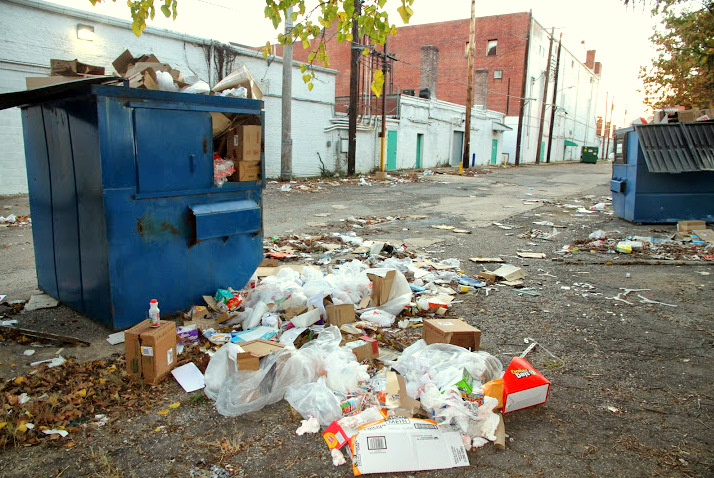 Trash overflows from the rear of the shopping center five weeks ago. A view of the same spot on November 23. (Top photo Kristerfer Burnett; bottom photo Mark Reutter)

Evidence of a general scrub-down was evident when about 35 residents and community leaders toured The Village on November 23.

Monique Washington, president of the Edmondson Village Community Association, expressed amazement when she spotted two men cleaning up the rear of the shopping center.

“I’m seeing more activity today than I’ve seen for years, which was nothing,” she said.

Cynthia Shaw, who has lived in the area for 36 years and is president of the Lyndhurst Community Association, marveled at the sight of a security guard trudging down the main walkway.

“Now that’s a sight to behold,” Shaw said. “Many elderly people in the community are afraid to come here. The Village has gotten a bad name.”

“We’ve been asking for security during the day for a long time,” Washington added.

Two Baltimore Police patrol cars were stationed near the Tobacco Outlet. A half-dozen men – whom this reporter had observed milling outside of the tobacco store on two prior visits – were nowhere to be seen. 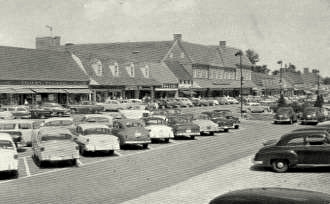 The Village in its heyday in the 1950s and (below) today. (Courtesy of Edmondson Village Community Association; photo by Mark Reutter) 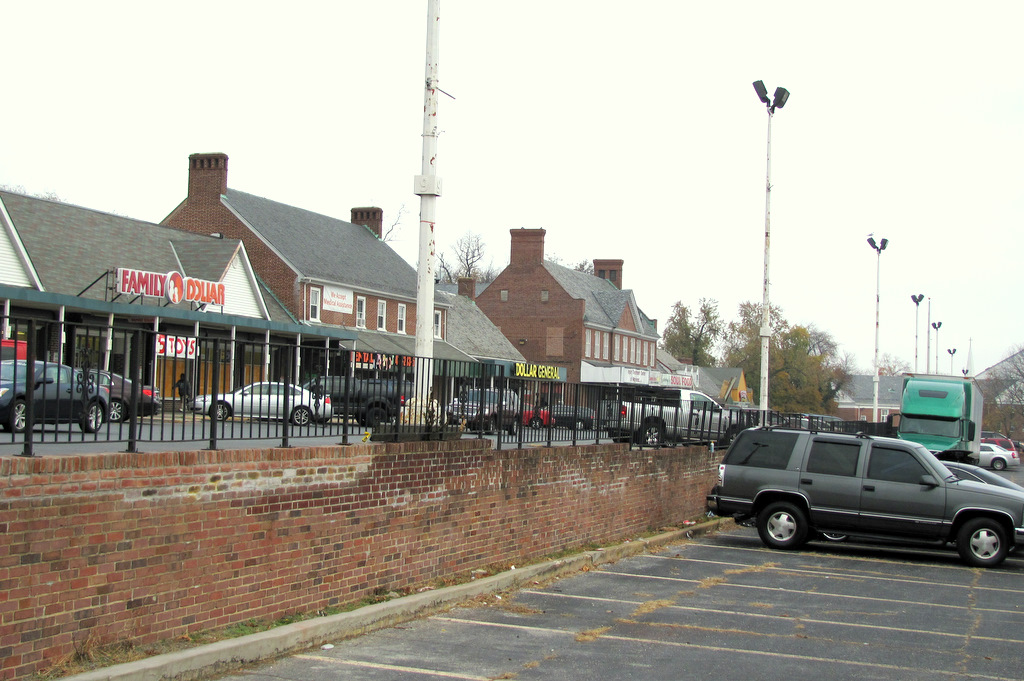 Shaw said the deterioration of the shopping center has caused major stress in the community.

“It was so nice here. It was the best place, especially at Christmas when they had white lights along the store roofs and in the trees, thousands and thousands of them,” she said.

The Village was, indeed, a destination for Westside shoppers and other visitors for years. It is credited as being one of the first – some say the first – suburban-style shopping center on the East Coast when it was completed by Joseph Meyerhoff in 1947 at the corner of Edmondson and Athol avenues.

With an architectural style reminiscent of historic Williamsburg and abundant parking, the facility was geared to shoppers using their shiny postwar cars, not the streetcars and buses converging on downtown Howard Street.

A cluster of more than 40 stores and professional offices – supplemented by a Hecht’s department store, opened across Edmondson Avenue – gave The Village the appearance of a tree-lined, small-town Main Street.

But rapid change took place in the mid to late 1960s. As the surrounding neighborhoods underwent an intense “block busting” that resulted in a nearly all-white population becoming 98.7% black, The Village suffered from competition from shopping centers opened across the city line along Route 40. 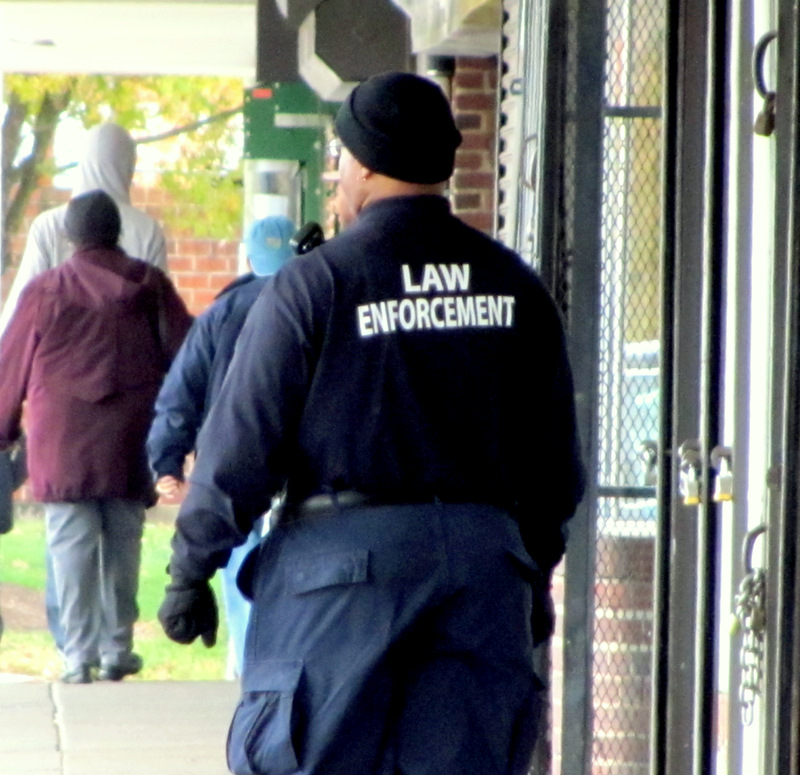 A security guard was present during the community walk. Below: Monique Washington stands next to a not-so-supportive beam along the main walkway. (Photo by Mark Reutter)

Distressed but still looking sharp, the shopping center was purchased by Harry Weinberg, the billionaire Baltimore real estate mogul who ran his empire out of Honolulu.

Following his death, the Harry and Jeanette Weinberg Foundation sold the shopping center to Miller and America’s Realty, a buyer of distressed shopping centers, in October 2006.

That was a heady time in local real estate, especially on the far Westside.

The proposed “light-rail” Red Line was set to build a station next to the center and the city was investing tens of millions of dollars in Uplands, a planned residential community just south of the complex.

In December 2006, Carl Verstandig, president of America’s Realty, promised $2.5-$3 million in improvements as well as plans to build “affordable townhouses” on several acres of vacant land behind the center.

Seven years after that announcement, the rear lot behind the shopping center has become a favorite ground for illegal dumping.

Brick walls and an old staircase to the Rognel Heights community lie in ruins amid piles of discarded tires and other debris. 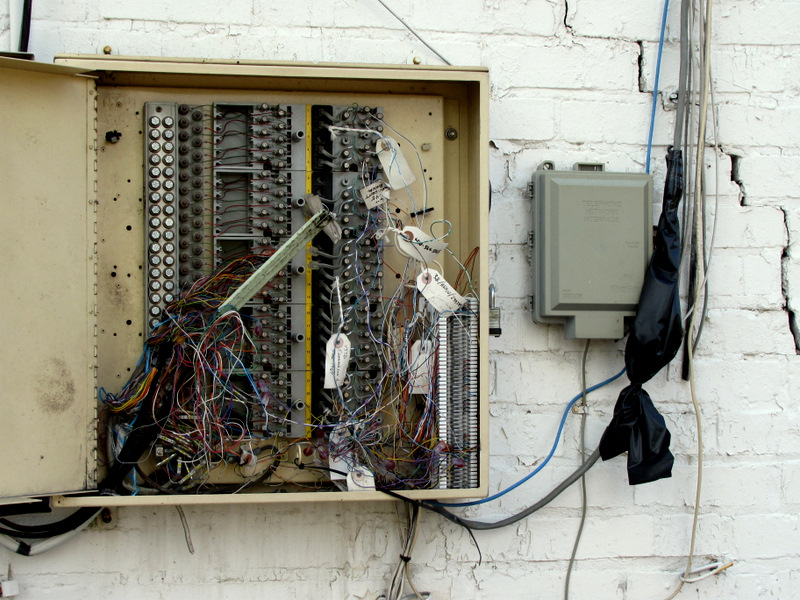 An electrical box exposed to the elements on November 8. (Photo by Mark Reutter)

The Red Line has yet to break ground, and the Uplands project is mired in the second of seven projected phases of development. Verstandig could not be reached for comment at his Pikesville office.

Washington, president of the Edmondson Village Community Association, says it is generally believed that Miller and his associates are biding their time to sell The Village.

“We haven’t  seen him in two years, when he came to a community meeting dressed in shorts,” she said.

Much as he would like to see the shopping center undergo a major rehabilitation, Burnett says his group’s campaign is focused at fixing up its appearance and making it safer for customers.

Near the top of his checklist are the “obvious signs of drug distribution in the front and rear” of the shopping center, he said, as well as frequent theft from businesses and customers – sometimes in broad daylight.

A police department spokesman said that Maj. James Handley, commander of the Southwest District, reports no increase in crime at the shopping center “from years past.”

“There were a few commercial robberies at the shopping center several weeks ago, but an arrest has been made and a suspect has been charged,” said Det. Jeremy Silbert, adding, “With the start of the holiday shopping season, the BCPD will be increasing patrols around commercial businesses across the city. As in years past, the Southwest District will also be increasing patrols around this shopping center”

She and Christopher R. Williams, president of the Hunting Ridge Community Assembly, are in the process of forming a coalition of association presidents to seek more private investment in southwest Baltimore – and more attention from City Hall.

“The city has poured a fortune into Uplands. But it’s missing a vital step if it continues to let the shopping center go to pot,” Williams said.

“Right now,” he continued, “the only thing that’s missing are the saloon girls and some horses ’cause otherwise The Village has the reputation of a wild west town.” 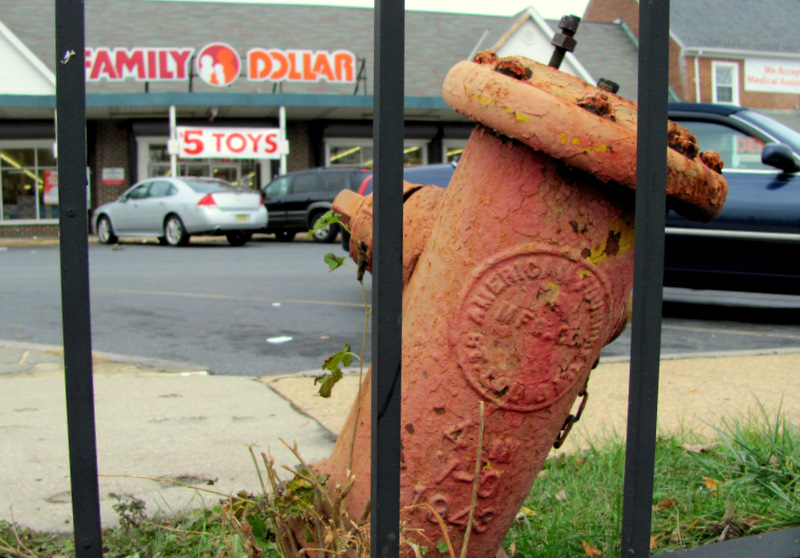 A disabled fire hydrant leans to its side in front of one of the two “dollar” stores in the complex. (Photo by Mark Reutter)