The biggest public works project ever proposed for Baltimore, the $2.6 billion Red Line, has yet to put shovel to ground, but it nevertheless cast a long shadow over the city’s transit future in 2013.

The plan for a rail line from Johns Hopkins’ Bayview campus to Woodlawn has been around in various incarnations since the 1970s.

Even as Gov. Martin O’Malley laid out a tentative timetable for the line’s final planning process, grassroots opposition grew in 2013. The critics said they weren’t against mass transit, and offered a counter proposal of a network of surface streetcars.

Brew readers seized upon the concept of streetcars – both pro and con – with relish. Not so in the case of the Maryland Transit Administration, which has spent tens of millions of dollars planning the Red Line, and Mayor Stephanie Rawlings-Blake, who last month lauded the Red Line as a “game changer” (the same words she used to describe the now-abandoned Grand Prix race).

But an aggressive push for trolleys by state Senator William C. Ferguson IV, together with growing skepticism about the Red Line’s benefits by some members of the business community, may set the stage for a real game changer in 2014.

The idea of trolleys running on tracks embedded in surface streets is nothing new. Baltimore had one of the nation’s most extensive systems – once. 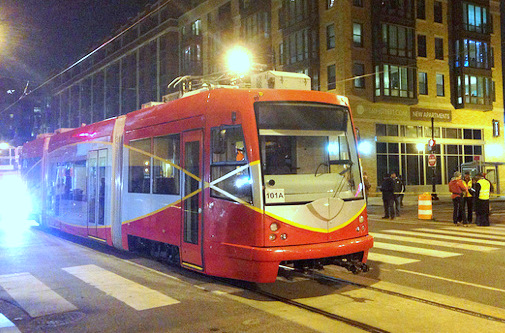 The last vestige, a 16-mile line linking Towson and Catonsville via downtown, was abandoned in 1963, reportedly because the developers of Charles Center didn’t want streetcars befouling their futuristic urban renewal project. (You can still see the rails sticking out on stretches of Greenmount Ave. and Fayette St.)

We wrote quite a bit about trolleys last year, which have made a comeback in other cities, including Washington, which is set to open the first segment of its H Street Line in about two months.

Little else of real note took place in local transportation.

Some roads were repaved and several bridges (e.g., at Sinclair Lane and Belair Rd.) were rehabbed. There was halting movement toward a bikesharing plan, while the speed camera program returned to square one with the firing of its latest vendor.

Here’s some quotables from a sampling of our 2013 transportation posts:

As presently designed, the Red Line is an expensive, slow, low-capacity “money pit” that is also facing citizen opposition in Canton and elsewhere. The downtown tunnel isolates the line from the existing Metro subway, requiring a dysfunctional two-block-long pedestrian tunnel for transfers. It also isolates the line from street activity and major destinations it purports to serve, like the Inner Harbor, Harbor East and Fells Point.

Harbor East developer John Paterakis has gone on record as opposing a station at Central Avenue, which would serve his development and Harbor Point. . .

Streetcars are the solution. Not only are they far less expensive and more convenient than light rail, but because using surface streetcars for a portion of the Red Line corridor can enable the rest of the line to be built in a far more effective and integrated way – and at a far more reasonable price. 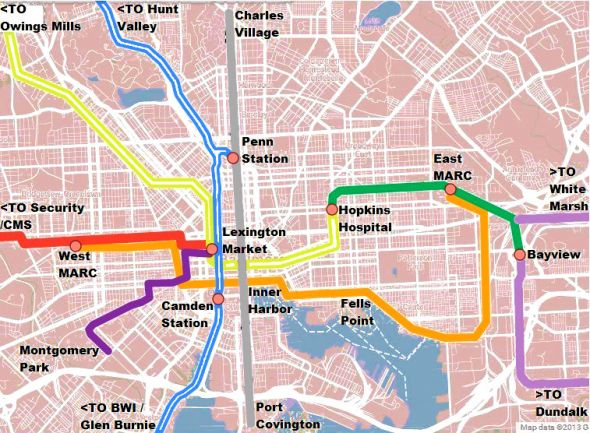 Gerald Neily’s plan for an integrated transit system in Baltimore.

• Why not use the Metro subway tunnel on Baltimore Street to operate Red Line trains through downtown, saving the cost of a nearly 4-mile-mile-long tunnel from the Poppleton area of West Baltimore to Boston Street?

Kay says that the two lines are incompatible because the Metro uses an electric “third rail” and the Red Line would use overhead catenary. Plus the Red Line’s rolling stock would consist of narrow, low-floor railcars that could not be accommodated by Metro’s high-platform stations.

Converting the Red Line into a “heavy-rail” system like the Metro would  require costly tunneling throughout its route, because the third rail must be separated from all potential human contact, while the Red Line would use existing city streets across much of its right of way.

Furthermore, connecting the Red Line, coming off the Franklin-Mulberry corridor in West Baltimore, to the Metro would entail “a huge hole in the middle of Seton Hill,” Kay says, and the closing of the Metro for several years to complete the connection.

What’s “our” streetcar doing in San Francisco? Riding on a transit system that works

What we destroyed here in Baltimore is exactly the kind of urban-friendly infrastructure that San Francisco used to fashion its smart transit network. This was brought home to me as I rode a streetcar cloaked in canary yellow and emblazoned with “BTCo” on its flank. The initials stood for Baltimore Transit Company, predecessor of the MTA, and it runs in San Francisco to commemorate the once great trolley fleets of American cities.

The car and its fellow vehicles from Chicago, Kansas City, El Paso, Birmingham, Louisville, etc., are not tourist baubles. They are quick accelerating, smooth riding jackrabbits that hopped past more bicycles than cars on The Embarcadero, a waterfront street liberated when a two-tier freeway above it was torn down in 1991.

In March 2011, the city was in the process of selecting a vendor to operate a network of rental bikes that could be accessed through computerized kiosks placed around the city. The effort was then suspended (in the midst of a mayoral primary campaign) because of fears that it would require too much upfront funds in a city short of cash for youth rec centers and schools.

Eight months later, the plan was revived with an agreement, approved by the Board of Estimates, to give B-cycle LLC the exclusive right to negotiate a concession with the city so long as no operating subsidies were required.

City cyclists have become fairly sanguine about occasional verbal, possibly joking taunts from people they pass. But the recent incidents appear to be more serious. “I thought I’d just outrun the attackers. Wrong,” wrote Brown, who said his escape route was cut off. “Unless you’re going down hill or already have some major speed, they will block your escape routes and grab any part of your bike or clothing to try to bring you down.”

Weekend MARC service to D.C. to start in December

A long-sought goal of transit advocates – MARC service between Baltimore and Washington on weekends – will become a reality on Saturday, December 7, courtesy of the state gas tax hike that took effect in July. Beginning on that date, the Penn Line will offer nine round trips on Saturdays and six round trips on Sundays, supplementing Amtrak trains between the two cities. 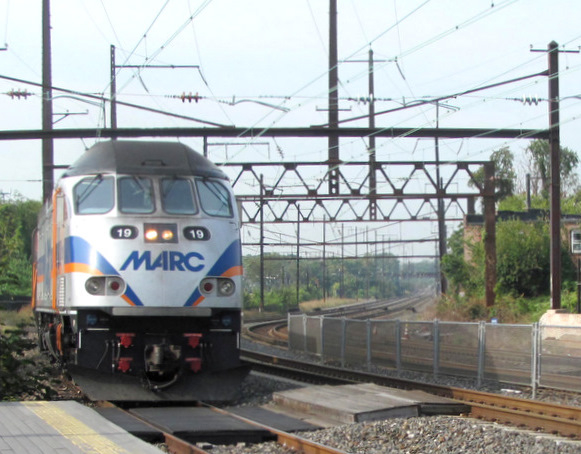 A tale of two train stations

At the West Baltimore MARC train station, commuters descend from the train platform on stairs with several risers so rusted-out you can see daylight through them. The pedestrian steps on Franklin Street are so eroded by runoff that the concrete structure appears in danger of collapse.

The decrepitude is striking when juxtaposed with the recent announcement of the completion of a $1 million renovation – of just the bathrooms – at the other Baltimore station used by MARC’s Penn Line, Pennsylvania Station.

Something happened underneath West Baltimore yesterday that transportation experts have worried about for decades. A passenger train derailed in a tunnel used by more than 20,000 Amtrak and MARC passengers a day. The southbound Silver Meteor came to a sudden, jolting halt at 7 p.m in the Baltimore & Potomac Tunnel built shortly after the Civil War. . .

In 1981-82, track conditions nearly shut down the [same] tunnel. Repairs to the lining, improved drainage and a major rebuild of the track structure allowed rail service to continue. That was 30 years ago. There have been no major improvements to the tunnel since then. . .

Accidents will happen, Elvis Costello reminds us. But accidents ought not to happen inside a structure that’s been identified as dangerous for decades – and that possesses no adequate escape routes for trapped passengers and crew.