A “listening session” with the mayor and Adrienne Breidenstine, new director of the city’s “Journey Home” homelessness initiative, went dramatically off-script yesterday when a citizen raised the issue of a homeless programs grant that federal auditors said was mismanaged.

Toward the end of the session, Leo Zimmerman raised his hand and asked about the year-old grant troubles, which the city has said it may have to solve by making a $7 million repayment to the Department of Housing and Urban Development (HUD).

Zimmerman particularly zeroed in on the role of United Way of Central Maryland that managed the bulk of the original $9.5 million grant under a contract approved by Mayor Stephanie Rawlings-Blake and the Board of Estimates.

“Why is the money being routed through United Way? They’re taking a 10% management fee,” Zimmerman said, speaking before a group of advocates and service providers meeting at the Govans Ecumenical Development Corporation (GEDCO) on East 33rd Street. “And is United Way liable. . .  for the money that’s been mismanaged?”

“Answer his question!” said audience member Kim Trueheart, interrupting when Breidenstine simply moved on to someone else in the audience. 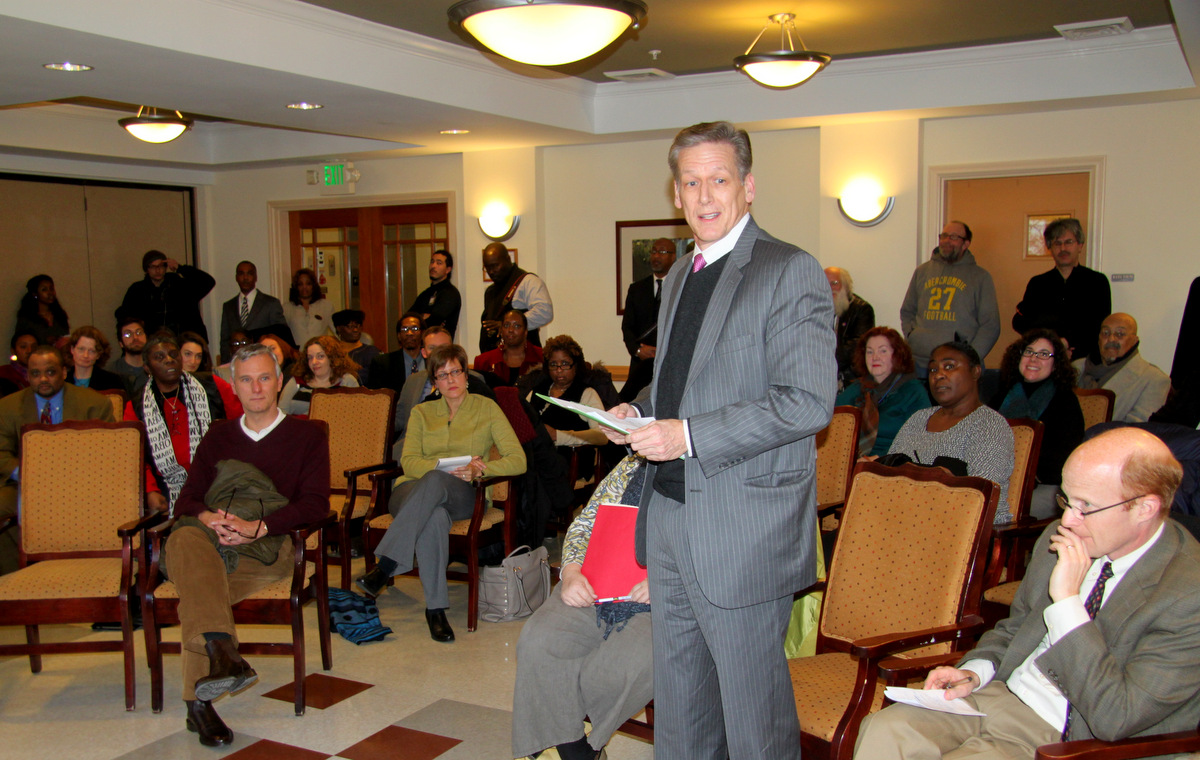 United Way of Central Maryland CEO Mark Furst said he was not prepared to answer questions about the federal homeless grant. (Photo by Fern Shen)

“So, I think there’s a little misinformation in some of your comments, but I’d be happy to talk to you afterwards about that,” Breidenstine said, noting that United Way CEO Mark Furst was also in the room.

Pressed to stand up and address the audience by Trueheart, Furst said, “I’m not prepared to answer,” but added he would be “happy to” do so at another time.

“This was a listening session. It was not to get into a specific set of questions and answers about a specific, in this case, federal review,” Housing Commissioner Paul T. Graziano said, stepping in. “If there are issues that need to be addressed, they will be addressed.”

The Brew has asked city officials about the grant and the highly critical November 2012 HUD audit, and is still awaiting answers.

Following up on yesterday’s meeting, we have asked Breidenstine and Graziano, as well as United Way spokseman Chuck Tildon, when they will publicly address Zimmerman’s questions.

Councilwoman Mary Pat Clarke, who had listened to the tense exchange, joined the conversation at the back of the room after the meeting. She said Zimmerman “deserves an answer to his questions.” She and Graziano invited him to be a part of a possible “working group” on the issue.

The audit is just one of the issues faced by city officials charged with addressing homelessness in Baltimore. Their most pressing and immediate challenges have been weather-related.

In the face of the recent record-breaking single-digit temperatures and bitter wind, the city set up additional emergency shelter space this week and took in 65 people. Baltimore’s 275-bed shelter on the Fallsway was filled to capacity, as were the 60 spaces the shelter makes available with pads on the floor in winter months. Emergency overflow space across the city was also at capacity, officials said.

“More than 1,000 individuals were housed overnight in shelters Monday, including additional overflow shelters opened specifically for this event,” Mayor Rawlings-Blake said yesterday in a release updating the Code Blue weather alert she issued this week.

“Overnight Monday, extending into early Tuesday morning, homelessness outreach teams interacted with 87 individuals and transported 54 of those to shelters.”

“We are Re-invigorated,” Mayor Says

But programmatic issues also face the city, which addresses the problem not only through the Mayor’s Office of Homeless Services, but also through the quasi-public Journey Home.

The initiative, funded through United Way, has embarked on a 10-year plan to end homelessness in Baltimore. (The name comes from the effort’s “housing-first” philosophy, which places a premium on getting people beyond shelters and into permanent housing.)

Yesterday’s meeting started with a news conference in which Rawlings-Blake introduced Bresidenstine, who took over in October as the group’s director,  and announced the new members of the board. 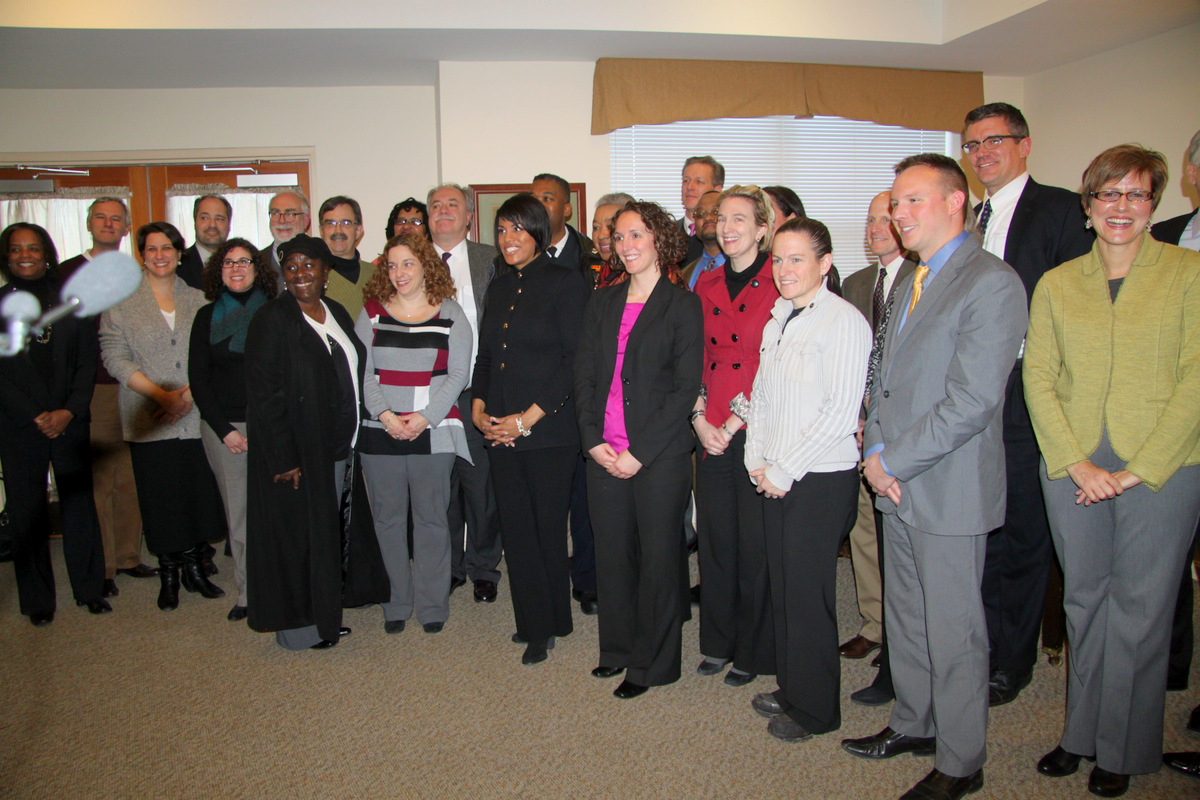 The mayor with members newly appointed to the board of her Journey Home homeless initiative. (Photo by Fern Shen)

Asked about the homelessness problem yesterday, the mayor cited the weak economy, social ills and dwindling federal funds as factors that are “changing the face of homelessness.”

Meanwhile actual progress in Baltimore is hard to gauge since even the numbers of people living on the streets or under highways are unclear.

Estimated at more than 4,000 two years ago, the city has since counted less than 3,000 but has said the actual numbers and trends are unclear because of under-counting.

Homeless people and their advocates have complained that changes in city policy, such as allowing people to stay for 90 days in the shelter (to allow staff to assess them and help them find permanent housing) is resulting in people being turned away, overtaxing emergency overflow shelter providers.

“Many people can point to the problems or can pass judgment on potential fixes but far fewer people are going to take action,” Rawlings-Blake said.

Asked specifically what accomplishments the city could point to six years into Journey Home – the initiative was announced in January 2008 by then-Mayor Sheila Dixon – Rawlings-Blake said, “We are re-invigorated to make homelessness rare and brief in Baltimore.”

A host of the city’s advocates for the poor and homeless were on hand yesterday to add their perspectives.

In addition to Trueheart, who spoke on the issue of leadership and urged Breidenstine to “just fire” those who are mismanaging homeless services, Christina Flowers, of Belvedere Assisted Living, spoke as well.

She called for more accountability, saying the city needs to do a better job of tracking down homeless people who “are entitled to benefits, but because they are sleeping under bridges they are not receiving it.”

Flowers and Councilwoman Clarke, who worked together last year to find housing for people being ejected from so-called Camp 83 under the Jones Falls Expressway, praised a program at Bon Secours Hospital that they said was effective in helping identify and help the homeless.

“We had a vision of how it could work, during Camp 83,” Clarke said.

For example, there is no inclusionary housing planned at the city-subsidized Harbor Point complex, but developer Michael Beatty has promised to voluntarily contribute $3 million to the city’s housing fund.)

Singer said he has looked at 400 jurisdictions around the country that have inclusionary housing laws. Baltimore, he said, ranks near the bottom of new dwellings produced for low-income residents.

He asked whether the mayor and City Council had any plans to commit more resources to the program.