The Rawlings-Blake administration introduced legislation in the City Council tonight to begin the acquisition and easement of privately owned land for the planned Red Line.

A lengthy list of easements and partial land acquisitions are required to provide a right-of-way for the controversial light-rail system. For the most part, the Red Line will run along city streets – or in the case of downtown, Fells Point and Cooks Lane – in a tunnel.

No residential properties will be demolished for the project, which is still at least a year away from federal approval and, most critically, more than $1.5 billion in needed “New Starts” transit funding.

The Rawlings-Blake administration has been pushing the project forward despite questions about how it will be financed on the state and federal level.

Under the plan submitted tonight, eight commercial properties will be acquired or condemned. They include Bambou Baltimore, a music venue on Franklintown Road; Studio 14, a recording studio; a carry-out restaurant on Fremont Avenue; a machine shop in East Baltimore; and two warehouses.

Housing Department Will Have Final Say

In 2012, the city agreed to take the lead in acquiring the properties, with the Maryland Transit Administration reimbursing the city for its “staff, legal and real property costs.”

In addition, the city has agreed to provide, at no cost, a franchise to the MTA for all street and other city-owned property needed for the line.

Paul Graziano, commissioner of the housing department, will have final say in determining what private land or easements will be acquired for the Red Line, the proposed legislation reads.

The city Department of Real Estate – “or any other person or agency that the Board of Estimates designates” – will negotiate and buy the land. Any property that does not reach a voluntary settlement with the city will be subject to condemnation procedures.

Proposed route of the Red Line, which is planned between Woodlawn in Baltimore County and Johns Hopkins Bayview campus, includes 19 stations and nearly five miles of tunnels. (MTA)

Starting in West Baltimore, the city plans to acquire subterranean easements along the 1000, 1100 and 1200 blocks of Cooks Lane.

The Red Line will run along Edmondson Avenue from Cooks Lane to Franklin Street at Poplar Grove. Along this 20-block stretch, the city plans to acquire some front-yard properties. In addition, many rowhouse front yards along Edmondson Avenue will be used by contractors, requiring temporary easements to be conveyed to the city.

The 2400-2700 blocks of Franklin Street in Rosemont will also be affected by construction, with several commercial properties slated for acquisition and demolition.

The MTA plans to build a storage yard and repair shop south around Franklintown and Calverton roads. The city has agreed to relocate its Public Works and General Services facilities in the area and deed the property to the MTA. 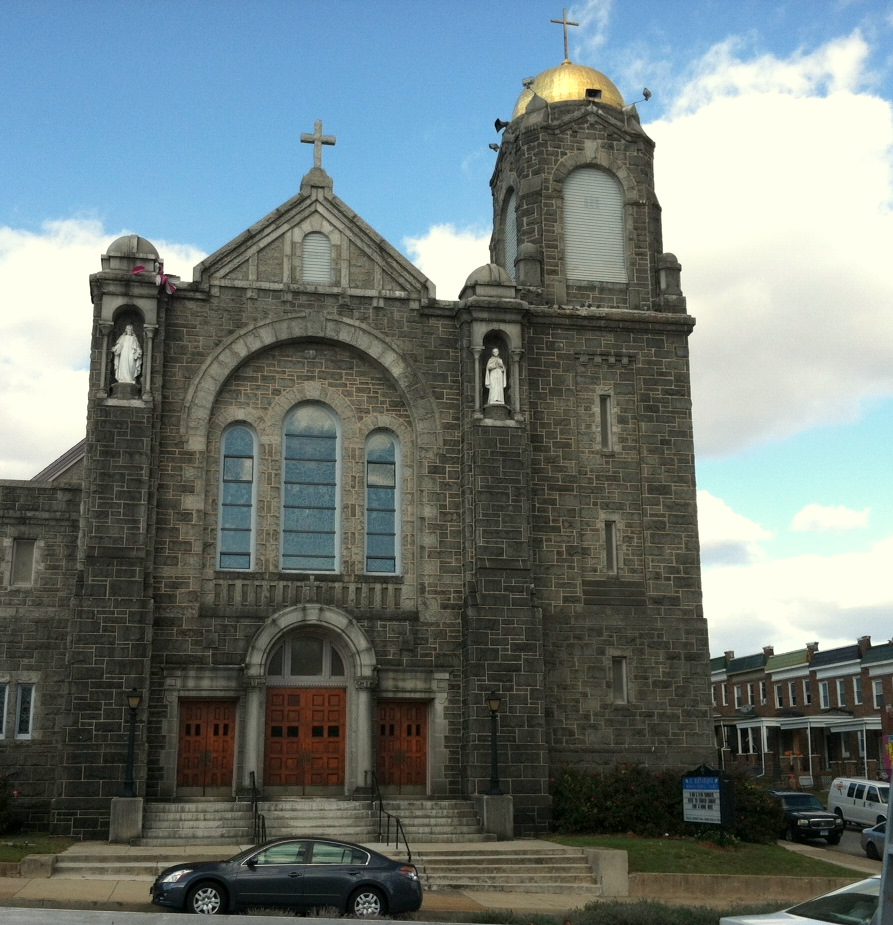 St. Bernardine Church, a landmark on the 3800 block of Edmondson Avenue, is not expected to be impacted by the Red Line’s right-of-way. (Photo by Mark Reutter)

The Red Line will run along the “highway to nowhere” corridor between MARC’s West Baltimore Station and Fremont Avenue, then enter a tunnel near the University of Maryland Medical Complex.

A carry-out shop at 764 W. Baltimore Street and an adjoining building are set to be acquired by the city, according to tonight’s legislation.

There were no estimates tonight on how much the easements and acquisitions would cost.

The MTA is required to demonstrate “satisfactory continuing control” over the Red Line’s right-of-way before the $2.5-billion-plus project can receive federal approval.