Saying she doesn’t have the luxury of debating the angst of people fearing violence in high-end communities, Mayor Stephanie Rawlings-Blake said citizens either have to join her in her efforts to reduce crime or acknowledge that they’re “part of the problem.”

The mayor gave this blunt assessment today when asked whether she had a reaction to the spate of articles by local citizens, mostly on-line, about the rash of homicides and violence in the first month of 2014.

Saying she skimmed the article, “Baltimore, You’re Breaking my Heart,” that created waves on the Internet (“and I also skimmed the response,” she added), Rawlings-Blake said this:

“I certainly hear the frustration. . . If a crime happens in an area where property taxes are higher, we’re suppose to care more? That’s a debate that can happen on Twitter. I’m focused like [a] responder to action and finding partners who will do more than write a check to their property taxes.”

In response to another question about ways to curb crime, she said, “This isn’t about playing the blame game or giving excuses. It’s about what are you going to do? If you’re not going to be part of the solution, that’s fine. But then acknowledge it, you’re part of the problem, because we need everyone to be engaged in their own way in helping us reduce violence.”

Asked how citizens could cooperate, the mayor said they could join a neighborhood safety walk (or create one), attend community relations councils sponsored by the police  or – alluding to the stigma against “snitching” – don’t be silent if you witness a crime or suspicious activity.

In her “State of the City” address to the City Council today, Rawlings-Blake outlined steps to address crime issues, including the spike of homicides that began last spring, peaked over the summer and returned with a vengeance in January with 26 killings. 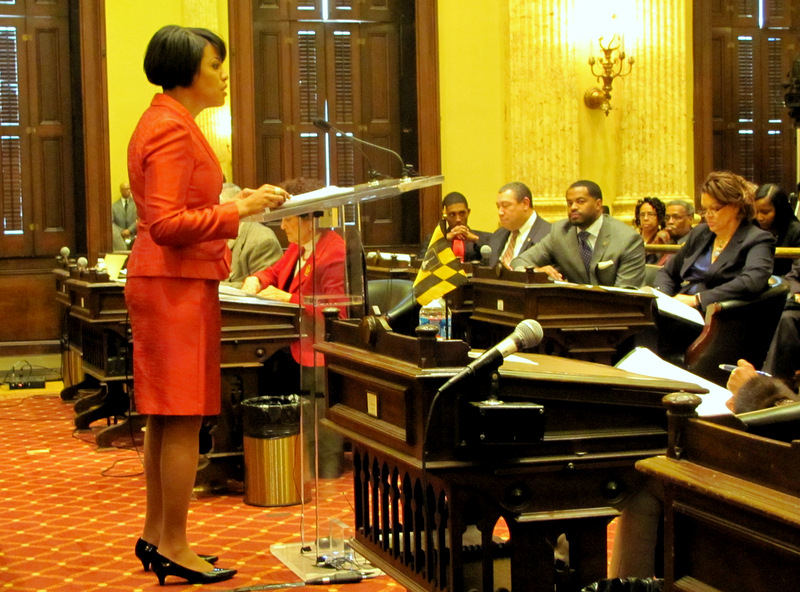 The mayor addressed the City Council this afternoon in the annual “State of the City” address. (Photo by Mark Reutter)

She said she wanted to institute Operation Ceasefire, a program developed by criminologist David M. Kennedy that successfully reduced gang violence in Boston and other cities. She said she would continue to work in partnership with local, state and federal agencies to target violent repeat offenders and would modernize the police department with computerized devices to take and process crime reports remotely.

In addition, she announced that she would expand the use of crime cameras around the city and develop Youth Connection Centers to provide a safe haven for young people who violate the curfew law.

These measures, she later told reporters, were developed as part of the strategic plan announced by her office and Police Commissioner Anthony W. Batts following a $285,000 consultant’s report.

“We have a strategy that we know works,” she said. “The same strategy that helped get us to a record low number [197] homicides [in 2011] . . . But we know that crime isn’t stagnant and criminals are always looking to stay ahead. And that’s why we are acting today to enhance that strategy.”