Although there are rules for how city agencies should manage their grant finances, they date back to the days of electric typewriters and rotary phones at City Hall.

Nobody follows them. The result: administrative chaos in the handling of nearly $300 million in federal, state and special grants funneled to Baltimore every year.

These are the findings of a report by the Bureau of the Budget that has laid publicly unacknowledged by the mayor, gathering dust since September in cyberspace. (Here’s a link to it, “Improving City Grants Management.”)

The findings add to other examples – tens of thousands of inflated residential water bills, a deeply flawed speed camera program, misspent federal homeless funds, miscalculated historic tax credits – of a government that stubbornly refuses to account for its own actions.

Mayor Stephanie Rawlings-Blake and her financial aides have no exact idea of how many grants the city handles each year, the report says.

Take the Mayor’s Office of Employment Development (MOED). The agency reports administering 27 grants, but only 6 grants were found in their fiscal 2013 budget by the budget bureau.

By contrast, the Department of Transportation had 13 grants “built into” their 2013 budget, even though they said they are handling only three grants.

Because notification of grants normally takes place in the late spring after the Board of Estimates approves the next year’s city budget, both MOED and DOT have taken to the practice of recording expected or recurring grants as “unallocated funding” in their budgets.

When such grants fall short or exceed the amounts expected – or when funds are transferred between programs – the agencies are suppose to prepare AAOs (Appropriation Adjustment Orders) to reconcile the differences.

Part of the reason has to do with the city’s on-line accounting system known as CityDynamics. The system captures agency expenditures, but does not record grant awards. As a result, most agencies use CityDynamics to record for expenditures, but then deploy their own Excel spreadsheets to track awards and revenues received.

If this sounds half-baked, it almost literally is – a system that’s half automated and half manual. Worse still, it creates two sets of books (award revenues and agency spending) that are rarely reconciled by the agencies, let alone by the Bureau of the Budget or some other independent office.

This is why the budget bureau fears that some agencies consistently overspend their grant funds, leading to the city’s persistent grant accounts deficit that has waxed and waned over the last dozen years but never gone away.

The deficit currently stands at $40.2 million, the report found. 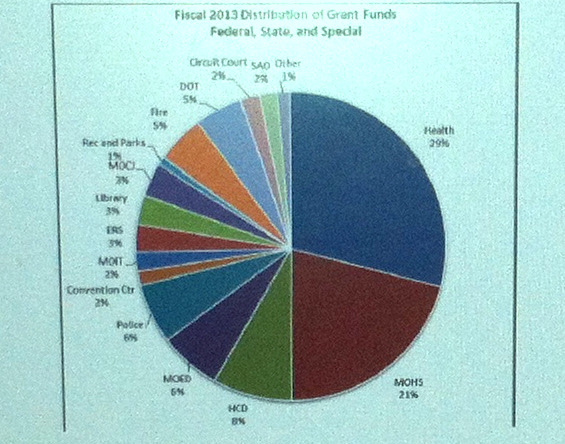 The city has been trying to quietly chip away at this deficit by raiding  the general funds to shore up spendthrift agencies.

The budget bureau gives one example – The Commission on Aging and Retirement Education that racked up a $4 million deficit on grants that it managed over a period of 10 years.

The city’s solution was to transfer $2 million from the general fund to offset the deficit. “The city has not been able to address the remainder of the deficit,” the report dryly notes, suggesting that a fresh raid on the treasury may be imminent.

In fiscal years 2010, 2011 and 2012, the city has transferred a total of $15.6 million from the Parking Fund to the Grants Fund to reduce the latter’s shortfall. Even with this infusion, the city is still running that large ($40.2 million) deficit at the end of the last fiscal year.

Breakdown of Grants per Department

Five departments account for 71% of of the total grant budget. They are Health, Human Services, Housing and Community Development, MOED, and Police.

The Health Department administers between 100 and 140 grants worth about $90 million last year. The Mayor’s Office of Human Services (which includes Homeless Services) was awarded about $65 million, mostly in federal grants.

MOED and the Police Department each received about $18 million in grants. MOED received grants for a senior aide program ($461,000) and a Heritage area management project ($101,000), but the lion’s share of funds were placed in the “unallocated” category because the federal awards had not been made.

The budget report did not look at how effectively the city uses the resources that Washington, Annapolis and private foundations so generously supply.

For example, are the nearly $30 million in yearly homeless grants from Housing and Urban Development (HUD) actually going to the homeless?

Are the funds providing long-term, cost-efficient solutions for people living on the streets, or are they going mostly into the pockets of non-profit bureaucrats and case workers?

That’s the million-dollar question that nobody in local or state elected office seems to want to address seriously. Or more accurately, the $300-million question given the estimated amount of grant awards that slosh around city government on any given year.