Ed Reisinger has found a great way to raise campaign cash during his 18 years as the 10th District Councilman representing southwest and south Baltimore.

In his own words: “Being chair of the Transportation Committee and also being on the Taxation, Finance and Economic Development Committee, a large number of companies, consultants, attorneys and architects come in front of the two committees that I meet.

“They give me their cards, and when I do a fundraiser, I send invitations out to everyone. Some contribute and some don’t.”

Last March 26, Harbor Point developer Michael Beatty contributed $500 to “Friends of Edward L. Reisinger” during a fundraiser. An equal amount was dispensed by Stephen Kearney, head of KO Public Affairs, the politically-wired communications firm that has Beatty as a client.

Five months later, with Beatty and Kearney observing in the Council chambers, Harbor Point won a lucrative $107 million TIF tax incentive from the Taxation Committee over the adamant objections of the panel’s chairman, Carl Stokes.

Who led the effort to get the legislation out of committee?

Reisinger: I Support All Development

Campaign contributions had nothing to do with his support of Beatty’s full-court press for the tax subsidy, Reisinger told The Brew after we disclosed the developer’s donations to seven Councilmen and Mayor Stephanie Rawlings-Blake during the period when the TIF legislation was under consideration.

“The thing is,” Reisinger said in an interview, “I support all development – Silo Point, McHenry Row, the 25th St. PUD and Wal-Mart – because if there is a vacant, unoccupied lot in Baltimore, I see jobs and property taxes and personal [income] taxes. It might not be right now or even eight years down the road, but these developments have a ripple effect, and open up and create jobs at other locations.”

A Baltimore County resident who had never before contributed to politicians in Baltimore City, Beatty funneled $16,000 in cash contributions to Mayor Rawlings-Blake. 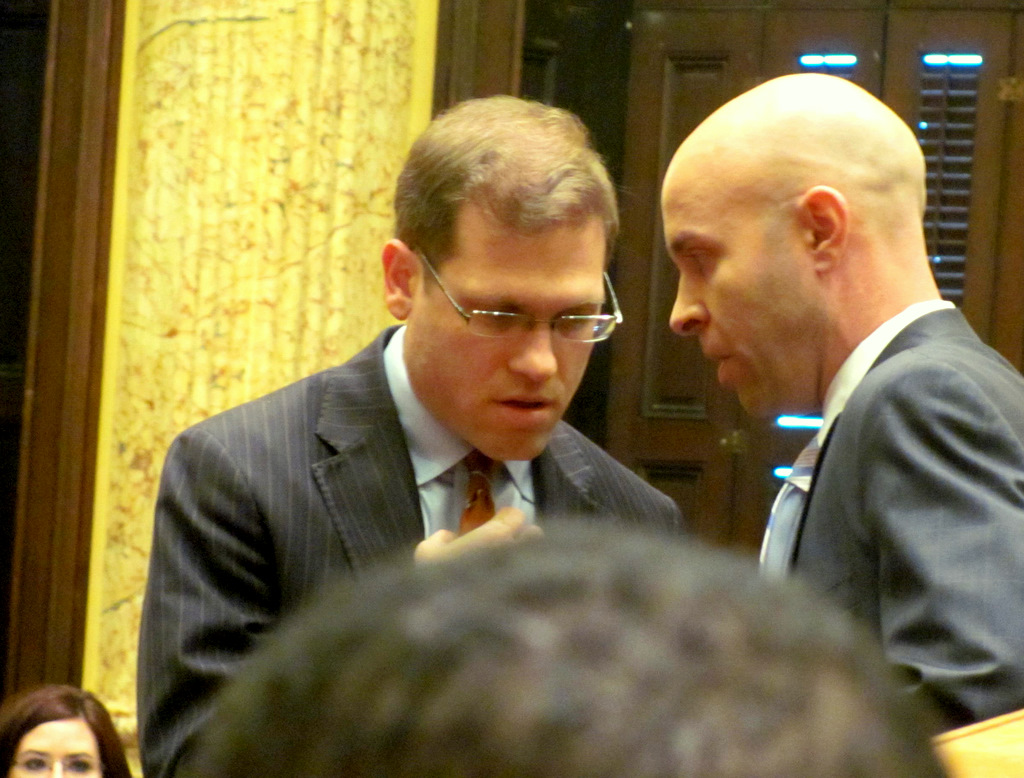 City Council members settled for a much more modest $5,750 in contributions, according to their self-disclosure statements.

The two Council members who opposed the TIF subsidy – Stokes and Sharon Green Middleton – and a third member who abstained – Mary Pat Clarke – reported no contributions from Beatty.

Multiple attempts to get a statement from the mayor’s spokesman, Kevin Harris, about the Beatty contributions have been unsuccessful. The mayor received a cluster of cash from Beatty interests last April in $4,000 increments (the maximum allowable in Maryland for an individual contribution in a four-year election cycle).

Five weeks after the contributions were recorded by the mayor’s campaign committee, Rawlings-Blake introduced legislation to the City Council for the $107 million TIF tax incentive.

She then held a press conference with Beatty on the Harbor Point site, advocating the project as a once-in-a-decade way to “grow Baltimore” through the creation of thousands of construction and permanent jobs.

In the past, the mayor has said that campaign contributions have no influence whatsoever on her decisions as Baltimore’s chief executive.

Back in 2012, Kraft strongly opposed the concept of tax subsidies for the Exelon Tower, the first building on the Harbor Point site, telling The Brew and other media outlets, such as The Daily Record, that Exelon “does not need to be subsidized by the city of Baltimore.”

Noting that the energy giant had just reported quarterly profits of $600 million, Kraft said Exelon “ought to be saying, ‘We don’t need it’” and should voluntarily agree not to apply for the enterprise tax incentives.

Kraft subsequently dropped his opposition to the Enterprise Zone tax credits (valued at $88 million for Beatty’s project), and also began asserting that the unique construction requirements of Harbor Point (over a capped chromium waste site) required TIF tax incentives from the city.

Last May 2, the councilman received a $500 contribution from the Beatty Development Group and another $500 from Beatty personally, according to his campaign disclosure statement.

Not specifically addressing his support for the TIF tax incentive, Kraft emailed this response: “Campaign contributions have nothing to do with the way I vote on issues or the projects that I support. I think that an examination of both my donors and not only my votes, but also the legislation that I have not introduced and the projects that I have refused to support over the years will confirm this.”

Kraft cited his opposition to Armando Cignarelli’s proposed Icon Tower a decade ago, despite Cignarelli’s $4,000 in contributions to Kraft’s election committee, as an example.

“There are many in business and industry who continue to financially support me even though I continue to push for plastic bag legislation, Styrofoam bans, the integrity of the MIZOD, etc. They know that while we may not always agree on the issues, I always listen to them, listen to the community, do my homework and do, to the best of my ability, what I think is fair and best for all concerned.”

Branch: It’s Never About Me

Branch did not respond directly to our questions, but issued a statement through his administrative assistant: “My customary practice, if asked, is to support legislation introduced by my City Council colleagues for his/her District. If my colleagues come to me for my support on legislation with regard to a law, development, etc., I will give it out of respect that my colleague is doing what’s best for his/her district and not because of any donations.”

Asked if he’d support a contribution “black-out” from developers when a large tax break or related matter is before the City Council, Branch said:

City Council President Young received $1,000 from Beatty last March (at his  fundraiser at Nick’s Oyster Bar in Federal Hill) and another $1,000 last December before the Board of Estimates, which Young serves as president, approved the $107 million TIF. 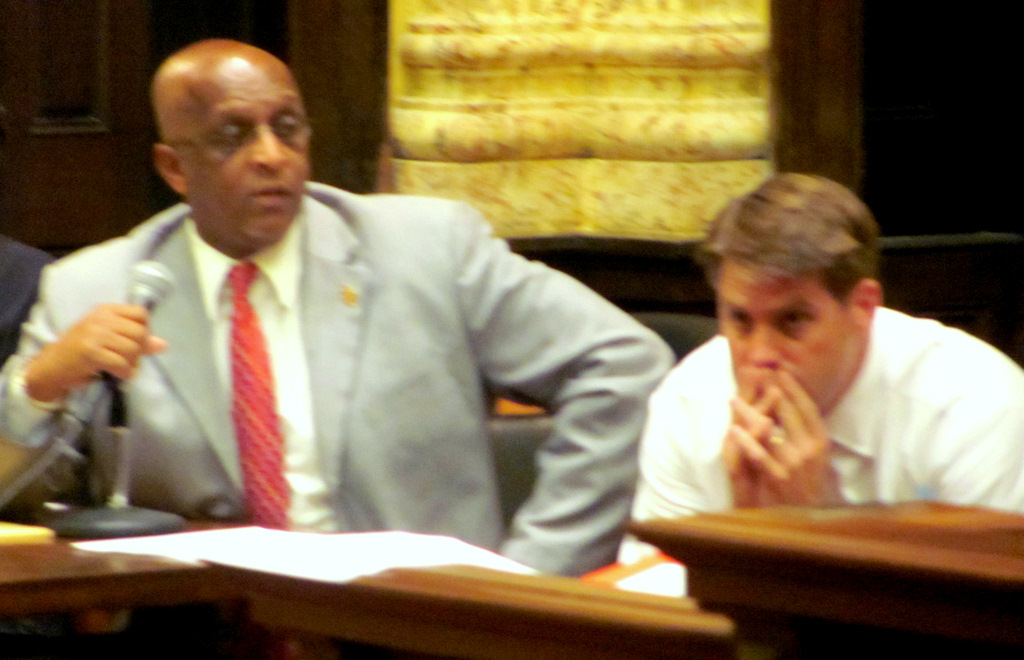 Young did not speak to us directly. His spokesman, Lester Davis, emailed this statement: “The Council President was unequivocally clear during last year’s debate around the proposed development that his support hinged on the fact that the project had the potential to deliver quality jobs for Baltimore City, which currently tops the state in rate of unemployment. In fact, the proposed development was the first project to opt-in to the Council President’s landmark Local Hiring ordinance.”

“Put simply,” Davis continued, “when the Council President first considered this project, he was guided by the generation of jobs, jobs, jobs for city residents. The Council President has been a major proponent of using the City’s capacity for economic development to spur much-needed job creation. And his proposals, most notably the historic Local Hiring ordinance, are proof that his focus, first and foremost, has been on lifting up the people of Baltimore through employment opportunities for qualified residents.”

Scott: Money Came After the Vote

Brandon Scott, the freshman councilman from the 2d District, said there was no improper influence by Beatty’s $500 contribution to his campaign because it came two months after Scott had voted in favor of the TIF tax incentive.

Scott said he reaches out for potential donations in much the same way that Reisinger does – he compiles the names of people who come before the Council. “You call the people who give money,” he said, and when he holds a fundraiser, “I call anyone and everyone to contribute.”

In Beatty’s case, Scott said, he didn’t even contact the developer about his fundraiser until October, or a full month after the Council vote on the TIF break.

Asked if he would support a fundraising “black-out” by businessmen with heavy stakes in pending Council legislation, Scott said, “I am open to that conversation.”

Asked about the $250 Beatty donation his campaign received last year from Beatty Development Group, 11th District Councilman Cole responded that the contribution “didn’t affect me in any way, shape or form.”

He added, “A contribution to a campaign event has nothing to do with support or opposition of any given project and I’ve demonstrated that throughout my career. A contribution doesn’t mean or predict success. There were several supporters of my event who opposed Harbor Point publicly.”

During an early hearing before the Taxation Committee, Cole openly questioned the $59 million in TIF credits going to finance parks at Beatty’s development, noting that benches and streetlights in the Inner Harbor are often raggedy.

His criticism was muted by the time he, Welch and Reisinger wrested control of the legislation from Stokes and voted for full TIF funding, including for the parks, requested by Mayor Rawlings-Blake.

No Response: Holton, Mosby and Welch

We queried three other Councilmen who received Beatty money and who voted for the tax incentives. When we didn’t hear anything from them, we asked them again.

In the “no response” category are Helen Holton, who chairs the Council’s powerful Budget and Appropriations Committee; Nick Mosby, who represents Northwest’s 7th District; and Pete Welch of West Baltimore’s 9th District.