One of the largest properties up for sale in southeast Baltimore, the shuttered Pemco factory on Eastern Avenue, has been acquired by a local investment group, which plans major retail and residential development, including a possible hotel, The Brew has learned.

MCB Real Estate finalized the purchase of the property, located across from the Johns Hopkins Bayview Medical Center in the 5600 block of Eastern Avenue, on April 8, documents show. The purchase price has not yet been recorded in state assessment records.

The 20-acre site – vacant since 2007 when Pemco moved its porcelain-enameling operations to Alabama – was originally eyed for a big-box store, a use that was opposed by many residents and small business owners in Greektown.

Developer Theo C. Rodgers, backed by Towson-based Caves Valley Partners, had the property under contract but never finalized the deal.

MCB, a young and rapidly-expanding Baltimore firm led by R. David Bramble, David Frederick and Peter Pinkard, has ditched the idea of a big retailer and instead outlined a mixed-use development more in keeping with Canton Crossing. 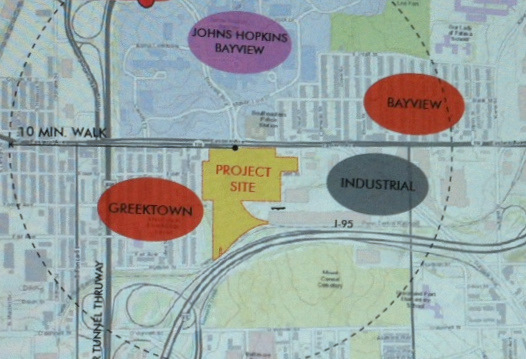 The 20-acre site is located between Eastern Avenue and I-95 just east of Umbra Street in Greektown. (MCB Real Estate)

They have hired planner Alfred W. Barry III and real estate lawyer Jon Laria to lay the groundwork for rezoning the land and establishing a Planned Unit Development (PUD).

The changes would require approval by the City Council.

“They have been carefully involving the neighborhood and other stakeholders in discussions,” said a Greektown resident. MCB officials could not be reached for comment.

The street would be flanked by small shops with overhead apartments, an office building and parking garage. To the east where derelict Pemco buildings now stand, there could be a 80,000-square-foot site for “larger-format retailers.”

The development would terminate at a “hotel/residential/office” complex near I-95 that would offer commanding views of the Canton waterfront.

Altogether, MCB envisions as many as 500 market-rate apartments that could serve students and staff at Hopkins Bayview. The group is also floating the idea of extending Foster Avenue, which now stops at Umbra Street, eastward into the site. 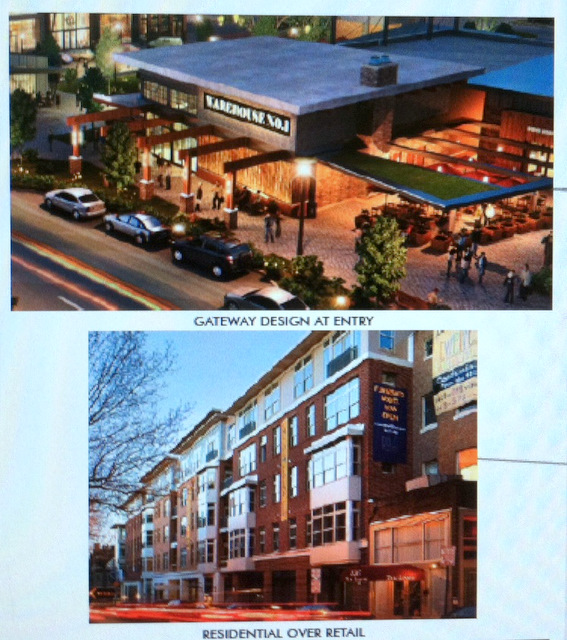 A rendering of how retail outlets and apartment buildings might look at the proposed development. (MCB Real Estate)

A longstanding sticking point has been the environmental cleanup of the site occupied by Pemco, which for nearly a century manufactured inorganic pigments and specialty glass (frit) used to produce porcelain enamel and ceramic glaze coatings.

Years ago, a ravine near Umbra Street was turned into a landfill for material contaminated with chemical waste and capped with six feet of clay.

The site currently has 20 wells monitoring possible contamination in the groundwater and is subject to regulations by the Environmental Protection Agency (EPA) and Maryland Department of the Environment. “The contaminants of concern are primarily VOC’s [volatile organic compounds] in the soils,” according to the EPA.

The new owners have hired Geo-Technology Associates to evaluate the environmental mitigation required for redevelopment of the land. The group says it wants to retain a minimum 130-foot-wide “green space” between Umbra Street and the new development.

MCB Real Estate says it has acquired more than 3 million square feet of commercial and industrial property from South Carolina to New York since it was formed in 2007.

With offices located in lower Charles Village, the group scouts for small shopping centers with low occupancy rates that it can lease up and generate more rental income. It specializes in properties with anchor stores such as The Home Depot, Pathmark and H.H. Gregg.

In February, MCB took a major step in enlarging its portfolio by purchasing the venerable Eastpoint Mall, two miles east of the Pemco site, for $33.4 million.