“There is an alarming crack in the street in front of these houses on the south side by the CSX railroad tracks,” said the prophetic missive on April 21.

“The sidewalk has sunk at least a foot. It appears that a sink hole might be developing. There is quite a bit of change from even a year ago when I complained about the uneven sidewalk. I have no idea what to do about this but something should be done before we have a real disaster. Any ideas?”

Within hours, she was advised of several things, including to call the city’s 311 hotline to report the problem as well as contact state elected officials “since this is probably a CSX related problem that the City is powerless to do anything about,” as one email put it. 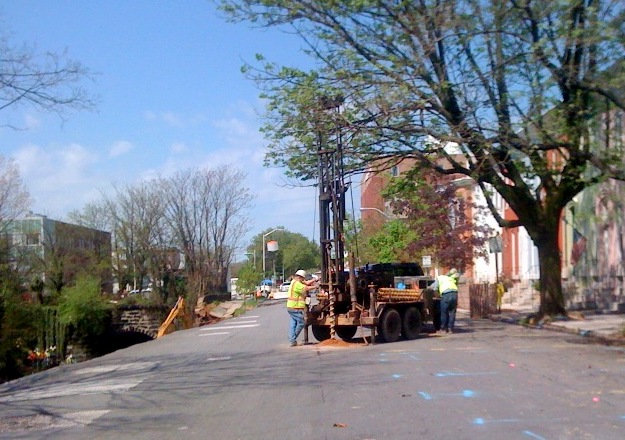 Engineers drill yesterday to assess soil stability on 26th Street. Pastel Row is on the right, the collapsed wall to the left. (Photo by Melody Simmon)

The day after 26th Street caved into the CSX freight line, Knight and others who live and work nearby said that you didn’t have to look hard to see that the street’s surface and surroundings were vulnerable and in distress.

Thanking God No School Kids Were Nearby

“I noticed the crack and how parked cars were tipping toward the tracks,” said Ted Henn, who owns Henn Pict Studio in the 2600 block of North Charles Street, around the corner from the wall. “I said at the time, alls it’s going to take is one good rain and that wall is gonna drop. And sure enough. . .”

“Our building shook when the street collapsed,” said Barbara Travers, who works at the PB Home Health Care agency across the street from the site.

Noting that Margaret Brent Elementary School is just across St. Paul Street – and children typically use the sidewalk that fell 25 feet into the rail right-of-way – she added:

Travers and others spoke yesterday as city officials and firefighters monitored the beginnings of a cleanup in the urban hollow that abuts Pastel Row, one of the city’s sweetest landmarks with a rainbow of well-kept, two-story rowhouses on the unit block of East 26th Street.

Residents have been evacuated from the buildings – and may not be able to return for several weeks. Many said they were dismayed that their warnings were not heeded before this week’s heavy rains doomed their street.

In the email chain of Knight’s April 21 warning, she eventually wrote: “If the houses or a person fall into a sink hole, they will need a good excuse. They can’t say they weren’t warned.”

At City Hall, some had also heard of the developing problem.

“We had been hearing from constituents for a long time that people saw this big crack,” said Councilman Carl Stokes, whose 12th District includes the Old Goucher portion of Charles Village.

Stokes said his office was not included in the most recent email chain, but that he hopes an investigation announced by Mayor Stephanie Rawlings-Blake into the incident would help to form a timeline.

Sharon Zitzer, who has lived on Pastel Row for 26 years, said she, too, complained about the crack that had formed in the street.

“I called 311 and the city sent out engineers,” Zitzer said. “I saw them cover the crack with asphalt and then they told me the street was ‘structurally sound.’ My husband, who is an engineer, said that it would last about a month. He was right.” 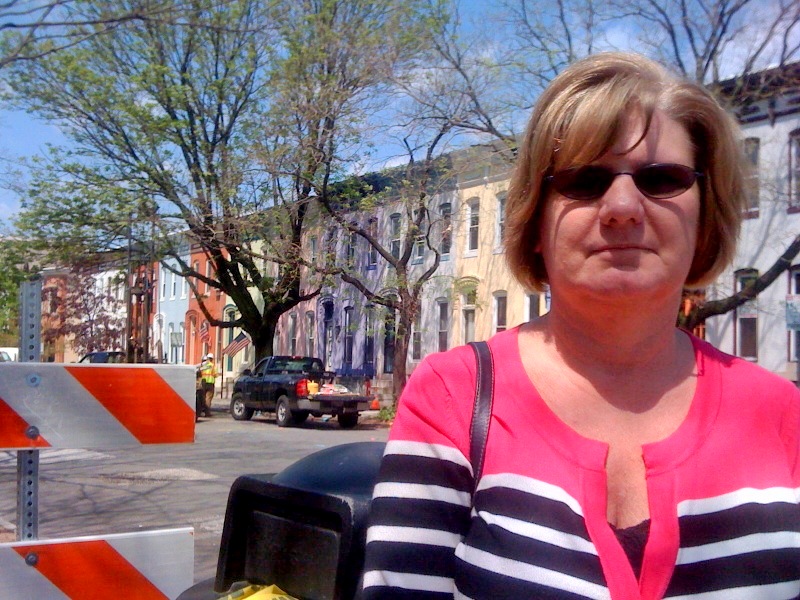 Zitzer, who had to abandon her three cats and temporarily moved in with her sister in Rosedale after the street was evacuated, also said she has kept all of the letters and emails she has written to CSX and the city raising concerns about the street and the railroad wall.

“It’s always been a battle about who owns this and who is responsible for it,” she said of an ongoing tug of war between Jacksonville, Fla.-based CSX and the city.

Stokes agreed. He said the city and residents have been forced to pick up trash and debris from the area that he said is the responsibility of CSX.

“It’s stupid. The city kept saying to CSX to do something, and CSX was not responding,” Stokes said. “For years, there have been complaints about the cracks in the street. They don’t even mow the grass. We have to beat them up to get the grass cut. For the past three weeks, residents have complained to the city about the crack getting bigger. Also complaints about the trains moving fast – faster than they should out of the tunnel.”

No Response from Florida HQ

A CSX spokeswoman did not respond to a request for comment about the complaints lodged prior to the street collapse. A statement issued by KO Public Affairs, the railroad’s strategic communications advisors, is here. Knight, who sent emails to CSX as well as the city, said she never got a response.

This week the rail company had a hat-trick of disasters associated with its rails: a derailment and explosion of a train Wednesday in Lynchburg, Va., a partial derailment of cars carrying coal early Thursday in Bowie, and the street collapse here. 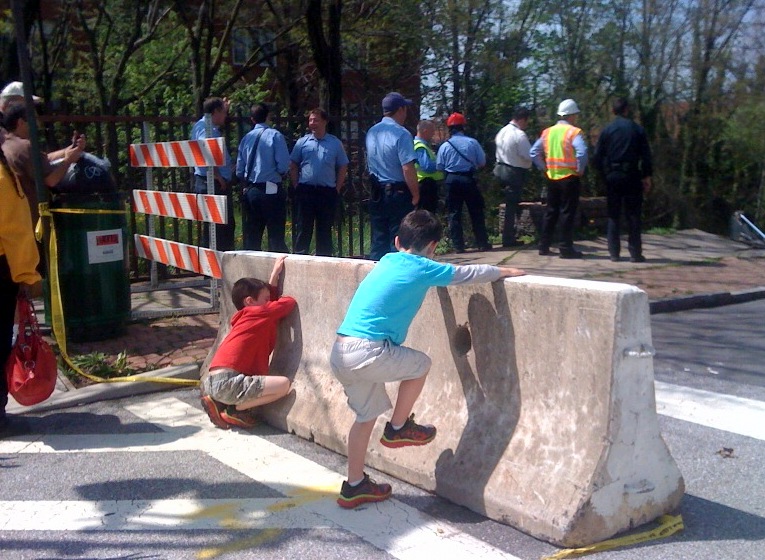 Twenty years ago, a CSX retaining wall collapsed just two blocks east, at 26th Street and Guilford Avenue. The incident led to finger pointing by the city and CSX, with a lawsuit filed to force the railroad to pay for the damages.

Kirsch Jones, president of the Charles Village Benefits District board, said he hopes that history will not repeat with the latest street collapse.

“I personally am hoping that the city solicitor’s office will rely on a precedent established two decades ago,” he said. “That cost about $2.8 million to repair and CSX had to pay a large portion of that total.”