Using a video, a rap performance, a Shakespeare-themed soliloquy and cold facts about industrial pollution, a group of student activists asked the school board on Tuesday to withdraw its contract with Energy Answers, a company that is looking to build an incinerator less than a mile from their South Baltimore school.

Free Your Voice, a group organized by United Workers and made up of students from various Baltimore schools and the Curtis Bay area, said the school system should not have supported the planned trash-burning power plant by agreeing to buy power from it.

“The sanctity of human life isn’t being acknowledged or respected,” said Destiny Watford, a Towson University freshman and Benjamin Franklin High School alum, who lead the group presentation at the meeting. “The fact that schools are supporting this shocked us.”

Watford showed a video she and other members of the group had made of their Curtis Bay community featuring points of pride, like the community garden near Benjamin Franklin High School.

The video contrasted the garden imagery with images of nearby industry.

“This is Curtis Bay’s backyard,” Watford said in the video as images of smokestacks appeared on the screen. “I never felt welcome. Now I know why.”

In December, the students marched from the high school to the former chemical plant where Albany-based Energy Answers has been trying to build the 160-megawatt Fairfield Renewable Energy Power Plant.

Opponents have been battling state utility and environmental officials over the estimated $1 billion project for the last four years.

Designed to generate power by burning refuse, tires, wood waste, car parts and other material, the plant would, according to Energy Answers, provide 180 jobs and meet or exceed air quality standards. Environmentalists say it would severely harm the health of an area that is already burdened with the highest levels of toxic pollution in the state.

The Maryland Department of the Environment (MDE) has said the emissions of particulates, lead and other harmful substances would be within the legal limits. Environmental advocates say the project would not be approved under regulations that have tightened since the plant was approved by the Maryland Public Service Commission in 2010. 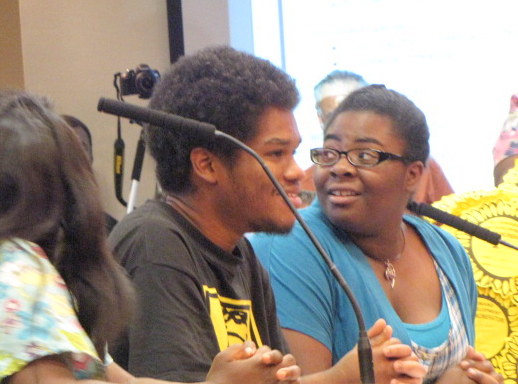 Baltimore City Schools has agreed to purchase energy from the incinerator through the Baltimore Regional Cooperative Purchasing Committee — a group representing 22 entities in Maryland, including Howard County, Baltimore Museum of Art, the Walters Museum, the city of Annapolis, and Baltimore City.

Although the students’ Free Your Voice group has been researching the public health and regulatory issues around the Energy Answers project, Tuesday’s presentation was more about fair community development and environmental justice.

After the video concluded, Watford said the Curtis Bay community deserves to be treated as fairly as any other community, that it’s not those who make money from incinerators who suffer health problems because of them.

“The only people paying the consequences are the members of the community,” Watford said.

Watford said the plant should not be built in an area that already has a high rate of respiratory problems and other health problems. “Is it fair to have your life cut short because of where you were born?” Watford said. “We say that it’s not fair, that it’s not right. That incinerator is failed development.”

If built, the Energy Answers incinerator would be among the largest of its kind in the nation and would produce more pollutants per hour of energy produced than the largest coal plants in Maryland, Watford said, concluding “We’re here to say that we can choose.”

Charles Graham, another member of Free Your Voice, took up the theme of choice. “Our choice is how to respond to climate change while we continue to generate more and more waste. The important thing is Hamlet recognized that he had a choice, and so do we.”

“To burn, or not to burn, that is the question,” Graham said, borrowing liberally from The Bard. “Whether ’tis better for Baltimore to breathe the foul and toxic air surrounding us or to stand up against incinerators, and by opposing stop them? To trash, to burn – waste no more, and by burning, to say we end the mercury and the thousand pounds of lead that trash has within? No – an incinerator gravely to be opposed.”

Audrey and Leah Rozier, who go by the stage name Double Impact, sang the “Free Your Voice Anthem.” Both girls sang extensively about the harmful effects of air pollution and the values they see behind it.

“This life starts with the air that we breathe, with everyone competitive and trying to succeed,” Leah Rozier said. “Just worried ’bout the money, not the air that we need, when you think opportunity the eye is deceived, the air quality will help and keep you livin’, but with all this pollution it’s like good deeds are forbidden and everyone is looking to take instead of giving.”

Commissioners: We Will Take Another Look

The board members applauded the students’ performance, when they concluded. Commissioner Cheryl Casciani said she would take up the invitation to visit Curtis Bay and that she and other members of the board would examine the purchase contract more carefully.

“I’m also on the sustainability commission and we’ve had a chance to hear from a subset of the students as well and we’re definitely in support of what you’re trying to do,” Casciani said.

“I think this is part of a number of other sustainability issues. We need to consider the source of our energy. We’ll talk to people in the operations department so we can understand a little bit more about [the purchase contract]. So I’ll look forward to hearing more about that.”

Baltimore high school students stun school board with rap on environmental injustice! from Free Your Voice on Vimeo.