For the sixth time in 11 years, Sparrows Point is expected to get a new owner.

The first four were operating steel companies. The fifth was an out-of-town liquidator. The six, if all goes according to plan, will be the investment vehicle of Anne Arundel County businessman James C. (Jim) Davis.

Redwood Capital Investments was identified this afternoon by The Baltimore Sun and others as the mystery group negotiating to buy a large part of the former steel plant, which is being scrapped by Hilco Global, a Chicago-based financial services company who purchased the property with another investor in 2012.

The key parties involved in the prospective sale – which is expected to settle in the next two months – declined to be interviewed by The Brew, but did not deny that Redwood was the prospective buyer.

County executive Kevin Kamenetz said he has talked to the buyer, but could not publicly reveal its name because the transaction has not been completed.

The president of Redwood Capital Investments, R. Alan Butler, is a longtime employee of the Allegis Group, which Davis founded with his cousin, Baltimore Ravens owner Steve Bisciotti. Davis and Bisciotti turned the start-up into a $6-billion international staffing company. 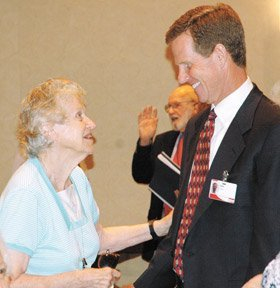 Davis is currently chairman of Erickson Living, a chain of retirement communities based in Catonsville. Butler is its CEO.

In addition to Erickson Living, Redwood Capital has stakes in Windsor Healthcare Equities, Beltway Capital Management, Avantha Power & Infrastructure Ltd., and BDB Realty, which invests in grocery-anchored shopping centers, according to its website.

In a recorded message, the principals at Redwood were described as not available today. They did not respond to email messages seeking comment.

State Delegate John Olszewski Jr., who represents the Sparrows Point area, said he met with Michael T. Pedone and other Redwood executives last month, where they disclosed their interest in buying the mill property.

“If Redwood is the buyer, I believe that this signals great potential and promise for the entire Sparrows Point peninsula,” Olszewski said.  “Not only does Redwood have a significant capital base that would be necessary to cultivate a clean property and pro-growth environment at the site, but they also are a local company headquarters right here in Maryland.”

Olszewski is one of many Baltimore County officials who want to partner with the Maryland Port Administration to clean up the carcinogen-racked south end of Sparrows Point and build a deepwater port.

The county is trying to interest private investors to build manufacturing and logistics operations elsewhere on the site, which remains under a 1997 federal consent decree requiring major environmental remediation.

At their meeting, Redwood executives indicated that they had similar hopes in redeveloping the property, Olszewski said.