A fine was levied for illegal gambling – and expired-but-still-squirming “zombie” liquor licenses were formally declared dead – during a day of dramatic changes as the newly-made-over Baltimore Liquor Board flexed its muscles.

Meeting for the second time under retired judge Thomas Ward, the board’s new chairman, the commissioners yesterday shook off the procedural glitches of the last meeting and powered through another lengthy docket.

They granted some requests from bar-owners, but denied many others that observers said would have sailed through in the past.

The starkest repudiation of the previous board’s decision-making came in the case of Good Fellas Lounge at 4919 Belair Road, whose license renewal is opposed by area residents.

In April, community leaders had been barred from making their case against the bar because they did not have enough signatures of people who lived 200 feet or less from the establishment.

Stunned, attorneys at the Community Law Center said that this so-called “200-foot rule” for renewal protests never existed and that the board, then headed by interim chairwoman Elizabeth C. Smith, had been wrong to throw out the petition and turn the community away. (Good Fellas was one of two protests the board had allowed to be squelched that day.)

Yesterday the community was back, requesting reconsideration before Ward, who has made no secret of his distaste for the 200-foot rule. When attorney Melvin J. Kodenski tried to defend its use in the Good Fellas case – arguing that it applies retroactively – Ward exploded.

“It never should have existed. . . it’s outrageous the idea that people should be prevented from giving their opinion as to a license because they live 200 feet away,” he sputtered. “It’s so outrageous as to be almost blinding.”

They went back and forth, with Kodenski saying the board was “violating the statute” and Ward, calmer now, replying, “I couldn’t disagree with you more.”

Not every request from Kodenski and the other lawyers representing licensees was turned down. Among those who came away smiling were writer Marion Winik and her fellow applicants for a new license for a micro-brew pub they plan in the one-time firehouse at 831 North Calvert Street.

In addition, Eric Levitt and Patrick Morrow (of Cathedral-Preston LLC, trading as Ryleigh’s Oyster) got the green light on their application to transfer ownership of a license at 1225 Cathedral Street where they plan a restaurant that will serve bivalves, beers and more. 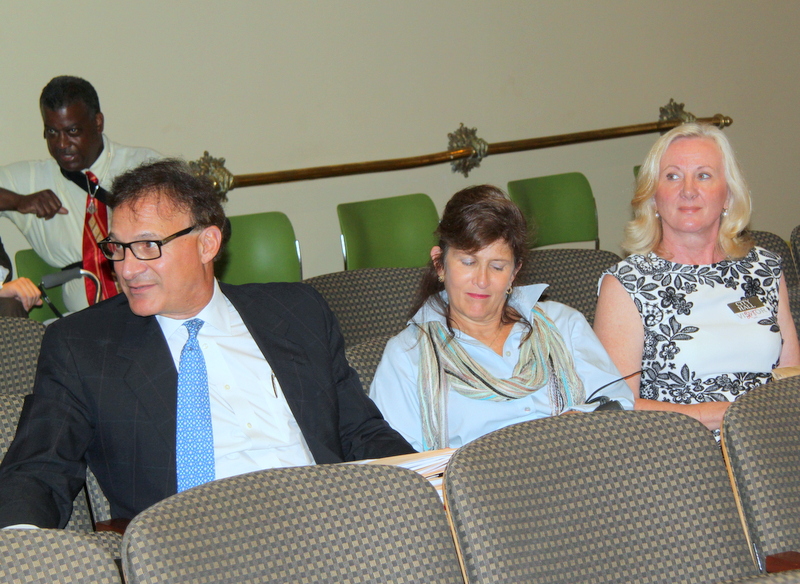 Attorney John Pica with licensee Marion Winik, wait their turn to come before the board. (Photo by Fern Shen)

The board also approved a request for a “special amusement license” by Kenneth Horsman for Illusions Magic Bar & Theatre, 1025-27 South Charles Street.

“I have to ask, what is your ‘special’ amusement?” Moore asked with a smile.

Bar Too Close to a School

But the reception was not so sunny for other licensees.

A request to transfer a BD7 beer, wine and liquor license from 411 S. High Street to 108-10 South Broadway and to add live entertainment, was slapped down briskly and with almost no discussion.

Fells Prospect Community Association president Victor Corbin was ready with his arguments. He had maps showing the establishment is 122 feet from Crossroads School, a city charter school for 6th through 8th grade students. (By law, such establishments may not be given a new or transferred license if they are within 300 feet of a church or school.)

He had a copy of a letter he’d written making additional arguments – that the Vera Shank Child Care Center is even closer, that the Powell Recovery Center is also nearby, that the Broadway corridor “is already overburdened with drunken vagrants that are now spilling over into residential streets.”

But Corbin never needed to bring them out. Before some participants had even taken their seats for the 11 a.m. session, Ward had declared the place “too close to a school” and pronounced the request “denied.”

Likewise Latin Quarters’ request to reopen at 646 Newkirk Street was not only denied, but the Greektown bar’s license was declared dead by Ward and the commissioners with a swiftness that seemed to surprise the lawyers on both sides.

The reason: it has been closed for more than two years and possibly according to some observers, as many as five. By law, if an establishment shuts its doors for more than 180 days, it loses its license.

“We can deny the request and kill the license?” Ward asked, somewhat rhetorically, as the Board proceeded to vote with him, unanimously, and send the licensee packing.

Another  harsh rebuke came as the commissioners tackled a two-year-old violation lingering from an establishment that has since burned and closed – Fells Point Liquor & Bar, at 1709 Fleet Street.

Detective Shelton Jones Jr., of the Baltimore Police Department’s vice squad, testified that on May 18, 2012, he saw an employee pay a male customer off for his winnings on a video poker machine.

(The putatively amusement-only machine can be manipulated to allow unlawful payouts, an illegal practice that reportedly costs the state of Maryland $15 million in lost revenue.)

The licensee’s attorney Frank Boozer questioned Jones sharply about how he knew the person was an employee and what exactly he had seen.” He could have been making change for a customer,” the lawyer said.

But the commissioners appeared ready to take harsh action against licensees Raj Bommakanti and William Ely, noting that the establishment had two previous violations for serving alcoholic beverages to underage patrons.

“What penalty should we assess?” Ward asked.

“Zero,” Boozer replied, noting that the licensee “lost everything” and “paid the ultimate penalty” when the place burned down. (Under questioning by Ward, Bommakanti acknowledged that the business was insured for $224,000 and that he had received $170,000 so far, though negotiations were continuing with the insurance company for the balance.)

Boozer also said that Bommakanti doesn’t have a license any more, presumably because the establishment has not operated since the 2012 fire, violating the 180-day rule. (The issue is of interest because there is a proposal to transfer the 1709 Fleet Street license to 1615 Eastern Avenue in the Douglass Place neighborhood, where there is significant neighborhood opposition.)

Ward and the commissioners imposed a $2,000 fine and rejected  Kodenski’s argument that the violation essentially dies with the license. “It’s against the person who commits the violation,” Ward responded.