The city publicly disclosed a southwest Baltimore sewer spill, required for any discharge of 10,000 gallons or more, nearly two weeks after that point had likely been reached.

The Maryland Department of the Environment (MDE) said yesterday it will review the city’s reporting of last month’s overflow into the Gwynns Falls after The Brew pointed out the apparent violation of public notification statutes.

“MDE will investigate the circumstances surrounding this overflow, including the public reporting of the overflow, as it does any other overflow,” Jay Apperson, an agency spokesman, said in an emailed response.

The Baltimore Department of Public Works reported that sewage spilled into the stream for 15 days before it was stopped, resulting in about 43,000 gallons of sewage. Public disclosure of the overflow came two days after it was contained.

So did the DPW break state law by reporting the overflow when they did?

Looking at the Code of Maryland Regulations (COMAR) 26.08.10.08(A), it would seem that the after-the-fact email to local media did not meet the reporting requirements of the law.

“Operator shall notify the public as soon as practicable, but not later than 24 hours after the time that the owner or operator becomes aware of the event.”

But in justifying the reporting, DPW pointed to the wording of another section of the law, one which addresses the 10,000-gallon threshold.

“The law says we must report the information ‘at the time of completed repairs,’” DPW spokesman Jeffrey Raymond told The Brew in an email.

The operator must report an event to the media “if the overflow’s total volume at the time of completed repair as measured or estimated using best professional judgment is 10,000 gallons or more.” (Emphasis ours.)

It’s not clear that the estimating needs to be done only at the time of the completed repairs. If so, Section C would always supersede Section A’s 24-hour requirement.

Such an interpretation would appear to render Section A moot, and no local agency would be required to inform the public of a sewer spill until after it has been fixed.

The law may be unclear but other local entities have interpreted it in a way that errs on the side of prompt reporting.

Anne Arundel County, for instance, reports overflows right away and even provides progress reports while work is being done.

Consider this day-after-the-event press release sent out on May 28.

“A power failure at the Mill Creek Pump Station in Arnold last night caused a large sanitary sewer overflow,” the release said. “The amount of wastewater that entered Mill Creek has not been determined but is expected to exceed 10,000 gallons.”

In February, a sewer spill in Hunt Valley was publicly reported within 20 hours by the Baltimore County Department of Public Works.

Baltimore City’s announcement of the Gwynns Falls overflow – explaining that it occurred near the 2100 block of Washington Boulevard and was caused by a broken 15-inch sewer main – came two days after repairs were completed and 17 days after the sewage was first reported to be flowing.

In addition to explaining its public disclosure of the overflow by citing the legal language, Baltimore DPW had some other comments for The Brew.

Here they are in full:

“We issued the release soon after completion of the pump-around. There is still a permanent fix that needs to be made on this line. Also, there is a permanent sign posted nearby warning people about coming into contact with water in the stream. Please also remember that the release was slow – estimated at about two gallons per minute – over the course of several days. Gaining access to this location with the proper equipment was not easy, but once our crews realized what the problem was they worked diligently to make the correction. Any overflow is bad, and we are always looking for ways to improve our response when they happen and to prevent them in the first place.”

Environmental groups have questioned the value of permanent pollution signs along waterways, saying they are not adequate to warn the public about particular pollution events.

UPDATE: After publication, DPW’s Raymond had this additional response:

“Your story today implies that we don’t promptly report. We do. You cite examples from other jurisdictions of reporting massive overflows as they occur, implying that we don’t. Below are three examples of sudden, large overflows that were all reported within hours of us learning about them. We take this responsibility seriously.”

Sewer overflows and other sources of pollution have long plagued the Gwynns Falls, which flows through West Baltimore into the Middle Branch of the harbor (and, thus, into Chesapeake Bay).

Located in parklands that feature walkways, bike trails and a public golf course, the stream is paralleled by aging city sewer lines.

DPW confirms that a local environmental watchdog, Blue Water Baltimore, first reported the overflow to the city on July 13.

“Our water quality manager spent the entire following workday to ensure that the responsible staff at DPW had located the leak and were following up immediately,” said Blue Water’s David Flores, who serves as the Baltimore Harbor Water Keeper.

“By the following weekend, DPW had contractors on site to begin addressing the problem, and I think that they will need to replace an entire length of decrepit, failing sewer pipe along the stream,” Flores said. 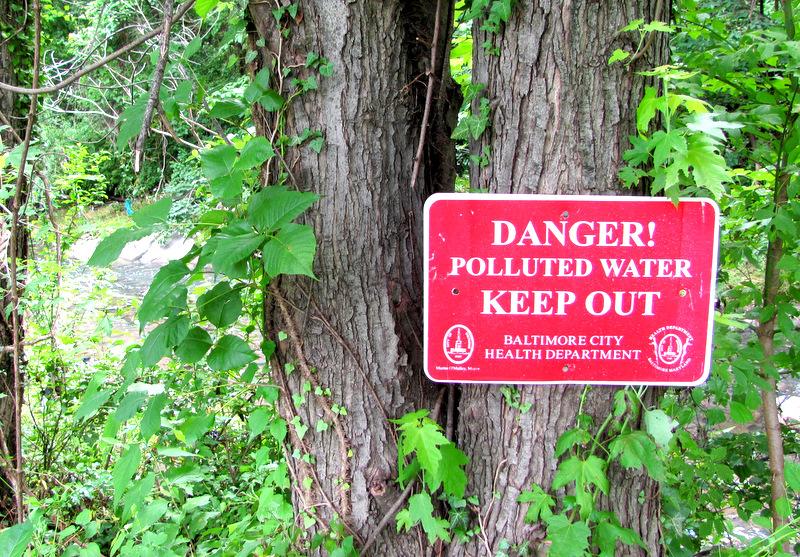 A sign that dates back to when Martin O’Malley was mayor warns of pollution in Gwynns Run, a tributary of Gwynns Falls. (Photo by Mark Reutter)

Flores said the group just happened to be in the area that day conducting stormwater outfall screening fieldwork with volunteers as part of its Outfall Screening Blitz project.

Flores said he hopes this incident will highlight the value of volunteer monitoring and citizen pollution reporting to help the city address failing sewer infrastructure issues.

“We have worked really hard with the city to establish collaborative reporting and followup on these and other pollution issues, ” he said.

Flores said he couldn’t comment on the specifics of the DPW’s public reporting of the Gwynns Falls overflow.

“But obviously,” he said, “Blue Water Baltimore feels strongly that public notification must take place in a timely fashion and in accordance with the law in order to protect public health and safety.”