Earlier this month, I was informed that one of my neighbors who happens to be a pastor was assaulted just steps from his home and church by Baltimore City police officers.

The officers came to my clergy neighbor’s house at 2:00 a.m., claiming that someone called 911. When my neighbor informed him that he was mistaken, one of the officers told the pastor to “lay the f*ck down,” handcuffed him and threatened to arrest him after waking up and interrogating his wife and sons on the front porch.

The officer eventually learned that the pastor was correct. There had been a mistake. They released him from the handcuffs and drove off without an apology or sound explanation as to why they chose to accost him. (Editor’s Note: Asked by phone and email to confirm or comment on this incident, the Baltimore Police Department has not yet responded.)

I was still angry about what those officers did to my neighbor in Baltimore when I learned about what another officer did to 18-year-old Michael Brown in Ferguson, Missouri.

Brown was walking home with his friend, Dorian Johnson, when a Ferguson police officer approached them in his squad car. There are various versions of what happened next, but by all accounts Brown had no weapon and had his hands up when the officer executed the teen – shooting him multiple times. His dead body lay on the street for hours as members of his community gathered around the scene bewildered and rightfully enraged.

I cannot say that my heart broke upon hearing about the murder of Michael Brown. That would suggest that I have already made peace with the killing of Anthony Anderson and Tyrone West – two black men killed in separate incidents by Baltimore police in recent years. 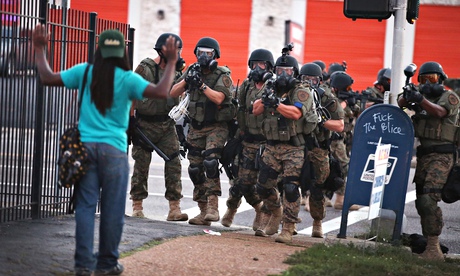 Police in Ferguson force back protestors from the business district into nearby neighborhoods on Monday. (Photo by Scott Olson/Getty Images)

To say my heart broke would be to imply that my pain has passed regarding the murder of Eric Garner – the grandfather who was strangled to death by police in New York.

Or that I’ve found relief in light of the murder of John Crawford, a 22-year-old shot by police inside an Ohio Walmart after he picked up a toy gun in the children’s section of the store. The latter incident happened just four days before Brown’s murder in that St. Louis suburb.

My heart is still broken from the murder of 22-year-old, Rekia Boyd, an apparently innocent bystander shot in the head by a Chicago police officer; Jonathan Ferrell, shot 10 times by a Charlotte, N.C., officer; and Marlene Pinnock, a 51-year-old grandmother who was videotaped being repeatedly punched by a California highway patrol officer as he straddled her on the side of the road. And those are just some of the names we know.

The question today is the same one that Rev. Martin Luther King, Jr. asked in 1967: Where do we go from here?

In light of the murder of Michael Brown, many are already putting forth ideas to help prevent these kinds of tragic events. From some calling for police officers to have more cultural competency training. Others suggest that shooting and killing of unarmed citizens should be a federal offense.

The ideas are many and varied. However, Dr. Valerie Bridgeman, the biblical and homiletics scholar and public theologian, puts us closer to the path where I think we need to be.

While she encouraged African Americans to report inappropriate police encounters at city council meetings, run for political office and build local bases of political power, she gave voice as well to an idea that is gaining new traction.

On her Facebook page, she has asked the black community to consider policing the police. While various state laws would need to be considered, blacks could use cell phones and cameras to record the police every time they’re in the community, with the footage being quickly uploaded to sites like YouTube and Vine.

In addition, Bridgeman said, if someone from the neighborhood is arrested, blacks should follow the police cars to the station, and civic leaders and pro-bono lawyers need to be waiting there ready to give assistance.

I support these recommendations and have had the opportunity to be a part of small initiatives like this in the past.

They should no longer be considered an idea of radicals and extreme leftists. The time has come for black, brown and poor people to lessen the dependence on a police force that seems infected down to its DNA with institutional racism. (A few “good officers” don’t change this fact.)

To get to the place where the black community is policing itself, help from groups like the Nation of Islam, veterans of the Civil Rights Movement, black business and legal organizations, The Dream Defenders, Color of Change, the Malcolm X Grassroots Movement, independent black media, and the NAACP Legal Defense Fund will be needed, along with many others. Churches, mosques and community centers must become hubs that help provide training, resources and places for the ongoing work.

A great amount of discipline, commitment and organization will be necessary to pull this off. However, black people don’t have to look too far back in history to find out that we’ve done it before.

From Marcus Garvey’s Universal Negro Improvement Association to Black Wall Street in Oklahoma to the Montgomery Bus Boycott to the Deacons For Defense, to the Black Panther Party – time and time again we’ve proven that we have within us everything need to defend our families, our dignity and our humanity. 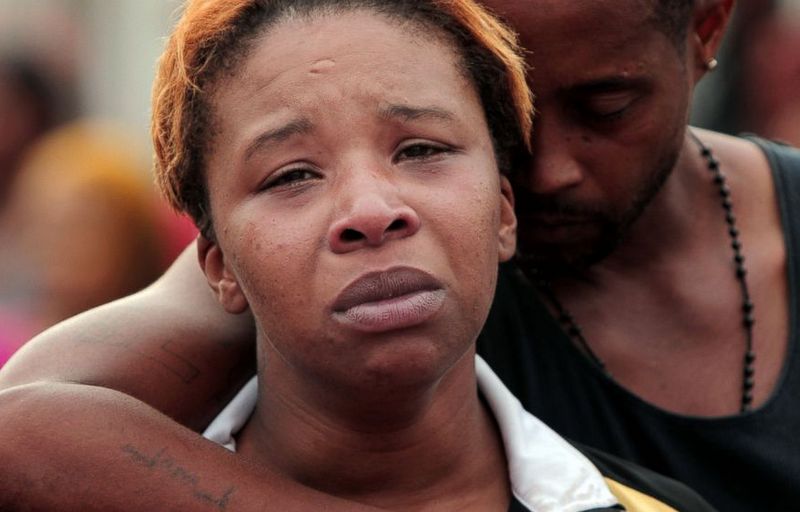 Lesley McSpadden is comforted by her husband after her son, Michael Brown, was shot and killed by police. (St. Louis Post-Dispatch, Huy Mach/AP Photo)

We asked the Baltimore Police Department for a response to the opening anecdote in this piece involving the author’s neighbor and, after publication, Lt. Eric J. Kowalczyk, BPD spokesman, provided some information.

He said officers, who were responding to a July 1st 911 call reporting a violent crime in progress, did go at about 2 a.m. to that location, which they later found to be the wrong address.

“The gentleman was handcuffed during the course of the investigation,” Kowalczyk said.

Asked about the allegation of foul language and rough treatment, Kowalczyk said “you have to remember the context, the 911 call.”

Asked why the officer didn’t apologize after the mistake, Kowalczyk said he could not provide details of the encounter because it was part of a personnel matter.

“The correct reporting was done,” he said, explaining that he was referring to an Involuntary Detention Report.

As a result of a complaint by the man who had been handcuffed, the department’s Community Investigation Unit completed an investigation but Kowalczyk said he could not, under personnel rules, disclose whether the officer was disciplined.