A strip club dancer on The Block told police that on May 22 she was strangled by a patron in a back room until she lost consciousness.

A month later at the same club, Norma Jean’s, police found a male beaten by three patrons wielding pool sticks. Police had another report of a choked dancer at Norma Jean’s the year before, on May 27, 2013.

But these extremely serious violations – on the docket before the Baltimore Liquor Board yesterday – quickly fizzled, not because they were disproved but because the police officers involved never showed up to testify.

Charges related to the allegedly choked dancer were withdrawn at the request of board executive secretary, Michelle Bailey-Hedgepeth. She said Sgt. Harold Dent had been subpoenaed by the panel, but wasn’t there and she didn’t know why.

Same thing with the June 14 violation at the club, located at 10 Custom House Avenue, a side-street off of East Baltimore Street.

Officer Elizabeth Scott was present to testify about a fight there, telling how she arrived after a report of an assault at the club to find patrons “running out of the bar” and the victim, a man “who turned around and he had injuries to his back.”

“The next thing I know, the sergeant in charge, Sgt. Dent, ordered me to write up the report,” Scott said, acknowledging that she had not witnessed the fight. (Dent was still not present yesterday as Scott testified.)

A Good Day for The Block

Ward wasn’t happy about the no-show by police officers. He directed Bailey-Hedgepeth to find out what happened, adding, “If I don’t receive a sufficient answer, I’m going to talk to Commissioner Batts.” 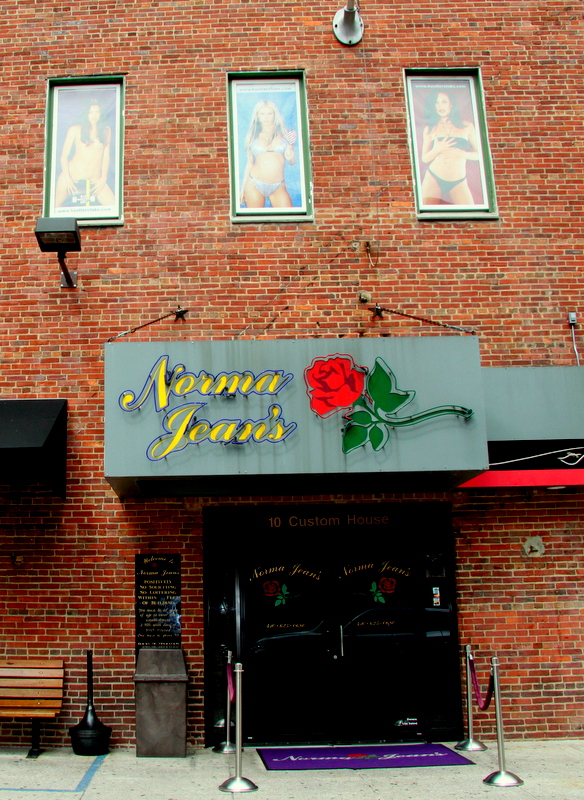 (Police spokesman Eric Kowalczyk has not yet returned our query about Dent’s failure to appear and the police role in Liquor Board cases.)

But the Norma Jean’s case wasn’t the only instance yesterday where bars in Baltimore’s longtime strip club zone came out smelling like roses.

Kings & Diamonds, of 414-416 E. Baltimore Street, was charged with having an underage dancer, a 17-year-old. Again the police officers were not present, so Ward dismissed the violation.

In the case of still another Block establishment, Circus Bar, 427 East Baltimore Street, the charge went away because of a board mistake. There had been a violation in which police say a dancer solicited a police officer on November 14, 2013.

But the board’s published docket had the date wrong, saying the alleged violation took place on November 11.

(The same thing had happened at the board’s July 10 meeting, when the case last came up. The docket had incorrectly said November 11. Ward had caught the error, noting the date on the police  report.)

The police officer was there yesterday and ready to testify (as he had been on July 10), but the once-again-erroneous docket sheet prompted Ward to postpone the case.

Missing police witnesses is far from unheard of at the Liquor Board. The Circus Bar, in fact, benefited on at least one other occasion from an instance where a police officer wasn’t present at a hearing to testify.

It happened last December 5. Circus Bar (as well as Club Pussycat and the East Baltimore bar El Antro) all saw their charges go away because police officers were not present to testify.

As a result, the El Antro violation, an alleged October knife attack inside the bar, was dismissed, while the Circus Bar and Club Pussycat cases had been postponed. (It’s not clear on what basis the board decides to postpone – rather than dismiss – the violations cases.)

Asked later why Dent wasn’t present for the Norma Jean’s case, Bailey-Hedgepeth said she couldn’t immediately go into details of who was accountable for the lapse. The dancer, she said, was also not available to testify. She mentioned two other summoned officers who did not appear.

“These are tough violations of a kind the board hasn’t seen before,” she said. “The notification was poor.”

Bailey-Hedgepeth, who started work for the board in May, added, “My pledge is to do better.”

Ward, questioned at the end of the hearing, also declined to discuss the matter of police witnesses except to say, “Yes, I’m disturbed by it. I’m very disturbed.”

As for Norma Jean’s, it was unclear whether the withdrawal of  the item from the docket meant the board was essentially postponing the matter or “disappearing” it.

Asked about it, Bailey-Hedgepeth said, “It probably is gone.”