That’s the concept, more or less, behind the HandleBar Cafe, a bicycle-themed restaurant and bike shop proposal that won a key victory yesterday when a Baltimore City Council committee approved a zoning change for 511 South Caroline Street in Fells Point.

The change from R-8 residential to B-1 business requested by applicant Mark Fitzgerald won near unanimous support from the committee.

The Planning and Law departments have also signed off on the change, which requires full council approval.

Supporters and critics seated on opposite sides of council chambers clearly had two very different views on the project and on the zoning change its backers sought.

One speaker said the cafe would generate the kind of street life and eclectic lifestyle mix that “define world-class cities, world-class experiences.”

“This would give me an opportunity to live in a walkable, viable community,” said Scott Burkholder, who lives on South Dallas Street.

A thriving cafe in that location, others said, would deter crime and help other small businesses succeed in the former industrial area between Broadway and Harbor East/Little Italy. 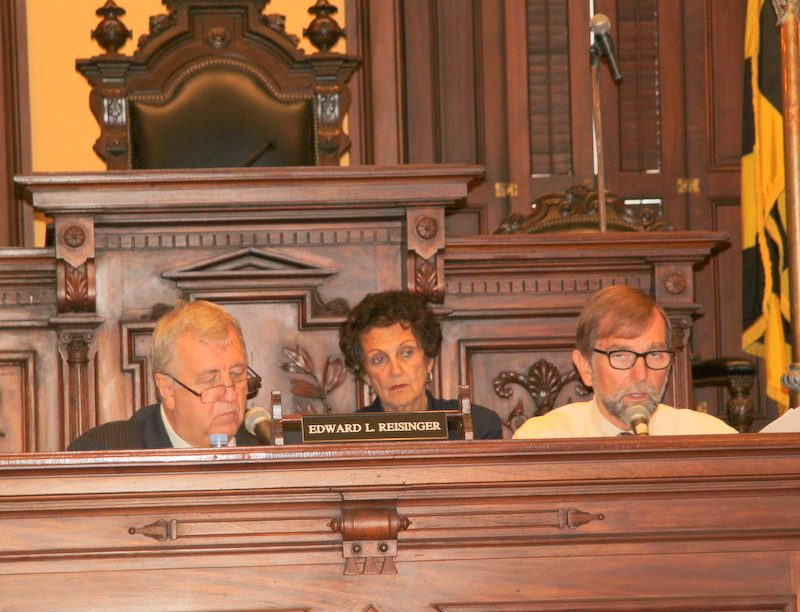 “This is exactly what I need to stay in business,” said Michael Wright, co-owner of MiY Home, a new furniture store on the 1600 block of Eastern Avenue.

Others questioning whether the bike concept would succeed, raised the specter of an eventual “mega-bar” in the 7,000 square-foot industrial building. Several blasted the city Planning Department for singling out one property for a change rather than following established procedure to consider whether wholesale changes to zoning designations might be needed across the neighborhood.

Victor Corbin, who lives on Bank Street, said Fells Point has too many bars and plenty of commercial space already, especially on the Broadway corridor. “You’re robbing Peter to pay Paul,” he said. “This is a textbook case of spot zoning.”

Hostile testimony yesterday from community activists from other neighborhoods underscored the degree to which the HandleBar rezoning has become a flashpoint for those who see larger issues at stake.

Along with spot zoning, it touches on the contentious matter of liquor licenses. (The applicant needs the zoning change in order to get one).

Community leaders from many neighborhoods have complained of an over-saturation of bars and liquor stores. “You have to address these issues in their entirety and not succumb to the highest bidder,” said activist Kim Trueheart.

Closer to home, the cafe project has also divided the small Douglas Place Neighborhood Association, which voted to oppose the zoning change, but whose secretary, MiY Home’s Wright, supports it. (The Fells Point Residents Association also favored the zoning change.) 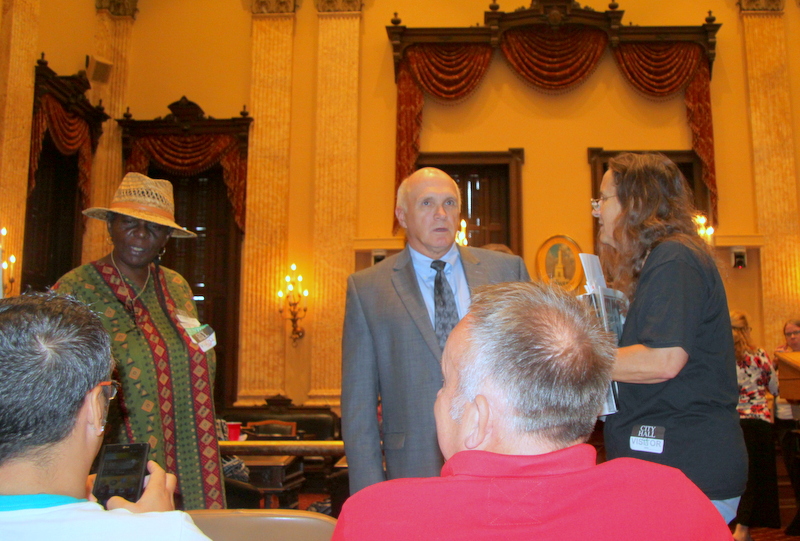 The frayed relations were on display yesterday. The residents who brought in lawyer Fred M. Lauer to represent them were careful to say Lauer was appearing pro bono and that their group was acting as residents, not members of the association. The applicant, meanwhile had his own plugged-in legal help, attorney Joseph R. Woolman III.

Not to be outdone, another neighborhood player, developer-baker John Paterakis, had his own high-end representation. Caroline L. Hecker of Rosenberg Martin Greenberg said that Paterakis, who owns the 531 South Caroline building, “does not have an issue” with the rezoning.

Notice Not Posted at Site

Tamara Woods, of the city Planning Department, testified that the area has changed since a comprehensive rezoning in 2007, going from a mix of uses and increasing in population between 200 and 2010 by 30%.

With 3,300 parking spaces approved for Harbor Point and 800 cars per day expected on Caroline Street as a result of that development, more changes are ahead for the area, Woods said.

(Woods, rather than Woolman, essentially presented the case for rezoning.)

Lauer began by declaring the whole hearing improper because the required notices about the rezoning has not been posted on the building since September 4, when residents noticed it missing. That went nowhere with committee chairman Reisinger. “Duly noted,” he said, proceeding with the hearing.

Some speakers strongly took issue with city planning officials’ finding that the neighborhood has changed.

“Substantial changes my foot,” said Fells Point resident Deborah Tempera. “I’ve been there a long time, and nothing’s changed!” Others agreed that it had. “I have lived here for six years and I have seen historic changes,” said Omar Semidey, proprietor of By Degrees Cafe.

Lauer and other speakers pointed out that the Planning Commission voted as recently as last year for a Comprehensive Rezoning bill that made no changes at 511 South Caroline and essentially approved it as residential property. Another zoning vote converted a nearby property (515-529 South Caroline) from an industrial zoning designation to residential.

“So over the last year you’ve discovered all this new stuff?” Lauer said.

When he asked Woods about the large number of bars in the area, Reisinger stepped in to say that is a matter for the Liquor Board to consider, not his committee. When he asked her what impact the project would have on parking, Woods didn’t know.

But Woods said Planning’s support for the rezoning now was “not inconsistent” and the commercial designation allows for residential uses as well. “But as people move in we will have to allow for more services,” she said, eliciting applause from one side of the room.

When Fitzgerald came up to describe his project under questioning by Lauer, it almost seemed like an afterthought. He explained that cities like San Fransisco and Portland have bicycle cafes, “but this would be the first in Baltimore.”

In addition to selling high and moderately-priced bicycles and bike gear and having a repair shop staffed by professional mechanics, Fitzgerald said, the cafe would serve food and “coffee and alcoholic beverages as well.”

“This is how bicycle shops operate in the Internet age,” he said, explaining that since Amazon and other online dealers sell bikes and bike parts, bricks-and-mortar stores need special features to bring in foot traffic. 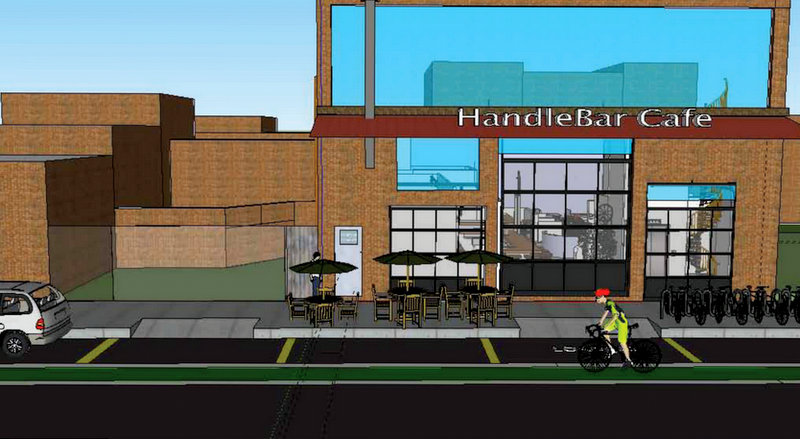 Asked about parking needs, Fitzgerald said he wasn’t sure but added “90% of the people should be coming by bike.”

He noted that his wife, Marla Streb, a professional mountain bike racer and three-time U.S. champion, would be overseeing the cycling side of the operation.

In a packet he provided to The Brew, Fitzgerald included a resume detailing his past experience as a bartender at Corks, Waterfront Kitchen and Slainte Pub, as a restaurant and bar manager elsewhere and as a co-founder of Streb Trail Systems LLC.

Other documents in the packet describe the “New Urbanism” aspect of the Handlebar project  – and the land use and development issues it raises.

“The geographical isolation of Harbor Point means that unless Central and Caroline not only as transit corridors but as livable streetscapes can be made to work, the $1 billion Harbor Point Project won’t work either,” it said.

Kraft made the same points as well in explaining his vote. He noted that Central Avenue won’t be able to handle future Harbor Point traffic and said some will have to go to Caroline. “Plus, you have people who invested a lot of money in their businesses and they need more foot traffic,” he said.

Responding to the criticism about spot zoning, Kraft said he would draft legislation to rezone other property in that block of Caroline Street as well.