Considering the fact that Eric T. Costello was the only candidate for the Baltimore City Council vacancy who had letters vigorously opposing his bid, including one with 35 signatures, it might seem strange that he was the one nominated.

But watching the meeting at City Hall last night conducted by Councilman Carl Stokes under the watchful eye of Council President Bernard C. “Jack” Young, Costello’s selection – out of 14 announced candidates – seemed preordained to many.

The panel only voted for one nominee and the nominator was Young’s former campaign chairman, Adrian Harpool, who also consults for city agencies. There was no deliberation. The vote, after a four-hour meeting, took just two minutes.

“It was a hand-picked committee and Jack’s campaign manager puts the name up. This was not at all subtle,” said former Federal Hill Neighborhood Association (FHNA) president Paul Robinson.

As the FHNA’s current president, Costello has proven to be such a divisive figure in the community – notably in the Crossbar beer garden project – that his critics were confident he would never get the nomination, but sent letters of opposition just to be sure.

But Young, according to community sources, made phone calls on Costello’s behalf in the days leading up to last night’s 11-2 vote nominating him to replace William H. Cole IV, the 11th District councilman who resigned last month to become head of the Baltimore Development Corporation.

“The level of arrogance and disregard for the voice of the people in selecting Mr. Costello is stunning,” Robinson told The Brew today, stating explicitly what many Federal Hill residents have been whispering since last night.

Concern about the process that resulted in Costello’s nomination extended beyond Federal Hill. “We believe that the process has been compromised by Young and his campaign manager,” Henry Valeri, former president of the Towers at Harbor Court Condominium Association, said today. (His wife Barbara Valeri is the association’s current president.)

He faulted Adrian Harpool for “committing to and apparently sponsoring Costello” before hearing out all the candidates, and Young for meeting privately with the candidate.

Young: No “Heavy Hand” at Work

Through his spokesman, Lester Davis, Young categorically denied he exercised any secret influence on the process.

“Goodness, no,” Davis said today, when asked if Young had orchestrated the Costello nomination. “There was no putting of his fingers on the scale or using a heavy hand – not at all.”

“What he did and what he made unequivocally clear he was going to do,” Davis continued, “was to have as a candidate someone who was going to be completely independent of the Council president and the executive branch and would represent the best interests of the district.”

Davis acknowledged that Young had met privately with Costello before last night’s vote, but said that was because Costello had requested the meeting. He said Young also met with “a handful of other candidates,” naming William Romani, David Stone and Shannon Sullivan.

“The Council president met with anyone who specifically requested a meeting to introduce themselves or just look him in the eye,” Davis said.

Asked about criticism over Costello’s selection without any other candidate’s name put forward for a vote, Davis said, “The process went well. The Council president was pleased under the circumstances. You had 14 individuals and some really strong candidates. It was a good night.”

Former Councilman Cole said today that he was not involved in the nomination process. “The Council president managed the process under the new Council rule, and that all happened after I formally resigned in late August,” he said in an email to The Brew.

Asked about his relationship with Costello, Cole said, “I’ve worked with Eric for years on community issues and will help him in any way possible.”

Costello’s name will go before the full Council on October 6, and if confirmed (as expected) in a vote that same night, the 33-year-old senior IT analyst for the General Accounting Office will take the 11th District seat immediately.

Among Costello’s constituents in the district, a swath of midtown, downtown and South Baltimore that encompasses some of the wealthiest areas in the city, are two groups who have been at war. 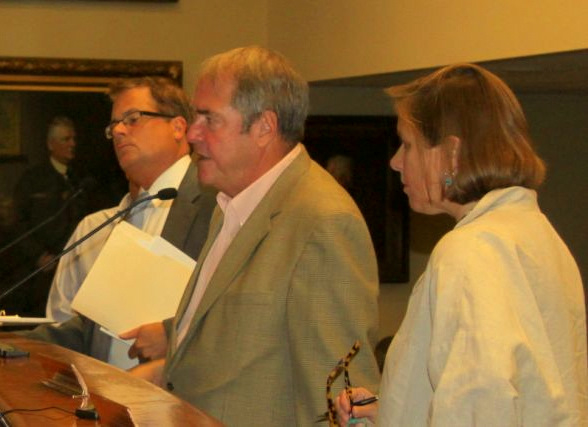 Crossbar lawyer Joseph Woolman (left) and Crossbar opponents Paul Robinson and Brooke McDonald duke it out before the Liquor Board earlier this month. (Photo by Fern Shen)

They are the restaurants and bar-owners near Cross Street Market and the residents who say the Federal Hill bar scene there has gotten out of control.

Crossbar, viewed by its critics as another potential “mega-bar,” has bitterly divided the community because of its size, scope, and the ongoing debate over whether its liquor license is even valid. It has prompted intense controversy within the Federal Hill Neighborhood Association.

The association ultimately voted to oppose the project, but many members accuse Costello of being more responsive to the bar’s developer, Brian McComas, than he was to his own membership.

A letter of opposition by 36 Federal Hill residents – many of them FHNA members – sent to the Vacancy Nominating Committee states “we do not believe Mr. Costello represents the best the great city of Baltimore has to offer the residents of the 11th district.”

The letter cites Costello’s “inability to build consensus on matters of critical concern.”

Against Will of Members?

The letter alleges that Costello violated FHNA bylaws last year by refusing to allow a general membership vote on the Crossbar expansion.

Instead, the letter alleges, he tried to “push the issue through” the FHNA board when he knew at the time that the majority of the membership was against the expansion.

It goes on to say that Costello refused to sign official FHNA letters after an overwhelming number of membership votes to continue to oppose the bar expansion – two to the Zoning board and Liquor Board, and the FHNA cover letter regarding the association’s appeal of the validity of Crossbar’s liquor license.

That appeal has been remanded to the Liquor Board and is expected to be considered there tomorrow.

Costello was one of fourteen candidates (Shannon Laurie Keeny withdrew her application) questioned by the 13-member vacancy nominating committee, which included council members Carl Stokes and James B. Kraft.

(Councilmember Rochelle “Rikki” Spector showed up toward the end of the hearing, as did Mayor Stephanie Rawlings-Blake’s chief of staff, Kaliope Parthemos. Council Vice President Edward Reisinger was also on hand.)

Each candidate got about 10 minutes to answer questions and express their views on a range of issues, including incentives for developers, crime, education, and homelessness – particularly how they would address the encampments under I-83 and along Martin Luther King Jr. Boulevard. 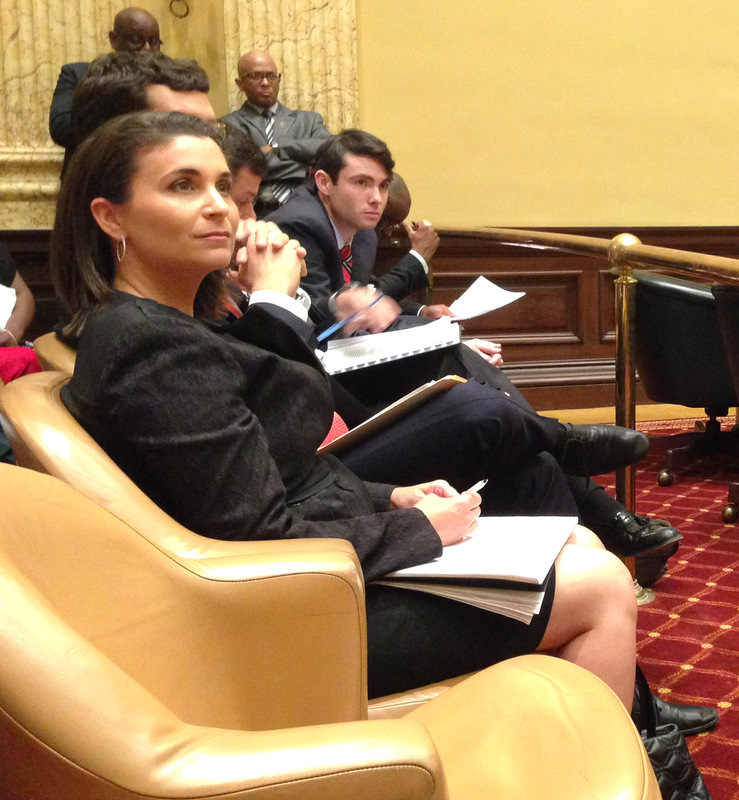 While some candidates gave dramatic stump speeches punctuated by vague platitudes, others spoke candidly about the city’s challenges, successes and changes they would make.

Otterbein resident and Baltimore school board vice chair Stone said he wanted to make Baltimore more of a family friendly city “because I’m not sure that it is.” He called on the city police and the public school police to have a better relationship.

Julie K. Dunham Howie of Marble Hill, on the far northern edge of the 11th District, said the police “are doing a good job with the resources that they have, but are still seen as the adversary in some communities.”

Rob LaPin, a former teacher and former 40th district candidate who lives in Ridgely’s Delight, addressed the impact of homesslesness on the city and characterized it not as a crime but as “a disease.”

Melanie Ambridge, who lives in South Baltimore near the newly-opened Horseshoe Casino, said she had left Baltimore for a number of years and when she returned was impressed with Harbor East. “I came back to Baltimore and saw that my city grew up.”

She said parental involvement was a key to improving education. “Our schools give parents all the tools they need, but parents need to step up.”

As for Costello, who received letters of support as well as opposition, he said would work hard for all of his constituents.

“I’ll welcome the 1 a.m. calls about a water main break in Locust Point,” he said, and supports economic development outside of harborfront neighborhoods. “State Center communities are hungry for smart development.”

He said he would support the quadrennial audits of city agencies (which was  approved by voters in 2012 and is now in effect, although no audits have yet been completed). He also said would plug for improvements to city markets such as Cross Street.

At the end of the lengthy, standing-room-only hearing, only two candidates were nominated by the committee: Costello and Greg Sileo.

Sileo was nominated by Michael Evitts of the Downtown Partnership, but a formal vote on his candidacy was not taken by the committee.

Harpool, who nominated Costello, runs Adrian Harpool Associates and is a longtime political player in the city.

Among his political clients, Harpool lists “Friends of Jack Young,” the campaign fundraising vehicle for the Council President. Young is pictured addressing the media on Harpool’s website.

Last night Harpool called Costello one of the few candidates who voiced substantial ideas. Regarding the other nominees, Harpool said, “I heard a lot of rhetoric.”