At a meeting of the South Baltimore Partnership Tuesday night, Arsh Mirmiran of Caves Valley Partners outlined the still-sketchy plans for redeveloping three blocks of mostly industrial properties on the southern end of the community sandwiched between Federal Hill and M&T Bank Stadium.

Mirmiran said the Towson-based developer, which has become active in South Baltimore real estate and holds a minority stake in the Horseshoe Baltimore Casino, has acquired most of the properties bounded by Cross, Race, Ostend and Leadenhall streets.

Mirmiran portrayed the project, dubbed Stadium Square, as bringing new amenities, such as a Bagby’s Pizza restaurant and a Trader-Joe-type grocery store, to a part of town that has few stores, food outlets or other services.

But members of the community wondered if the development could lead to the displacement of a black community that’s been nestled along Leadenhall Street since the early 19th century.

“It’s a very upscale project. My question is how would it benefit the community,” asked one resident. She added that “we were skipped over and I don’t want to have that happen again,” referring to the gentrification of Federal Hill and the Hanover Street corridor. 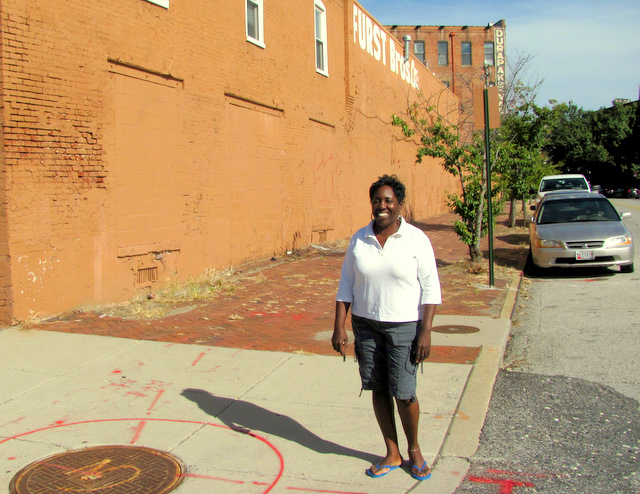 Betty Bland-Thomas next to one of the vacant industrial properties slated to be torn down for Stadium Square. (Photo by Mark Reutter)

Mirmiran reassured residents that “we’re not moving anyone out” – although about a dozen rowhouses on West Cross and West West streets will be demolished. “We want to serve as a catalyst for the entire neighborhood. We don’t want to plop down on three blocks and overlook everything else,” he said.

What has caught his attention, he said, is the dilapidated state of the public infrastructure, including the large stand pipe that belches acrid steam onto Leadenhall Street and asphalt sidewalks, “which are not normal or acceptable,” throughout the neighborhood.

He said rehabilitation of public utilities are a major challenge. Tax increment benefits from City Hall (similar to those awarded to the Harbor Point project) will likely be necessary to get the project rolling, he indicated.

Residents, led by Partnership president Betty Bland-Thomas, questioned why the 300 proposed apartments do not include “affordable,” or subsidized, units. Mirmiran did not directly answer except to say that residents who secure jobs from employers locating in the neighborhood may be qualified to rent at the development.

A key aspect of Caves Valley’s business plan is to attract high-tech and start-up companies to Stadium Square. “Sharp-Leadenhall is an incredible location for office space” because of its proximity to I-95, MARC’s Camden Line, Light Rail and the Charm City Circulator, he told the group. 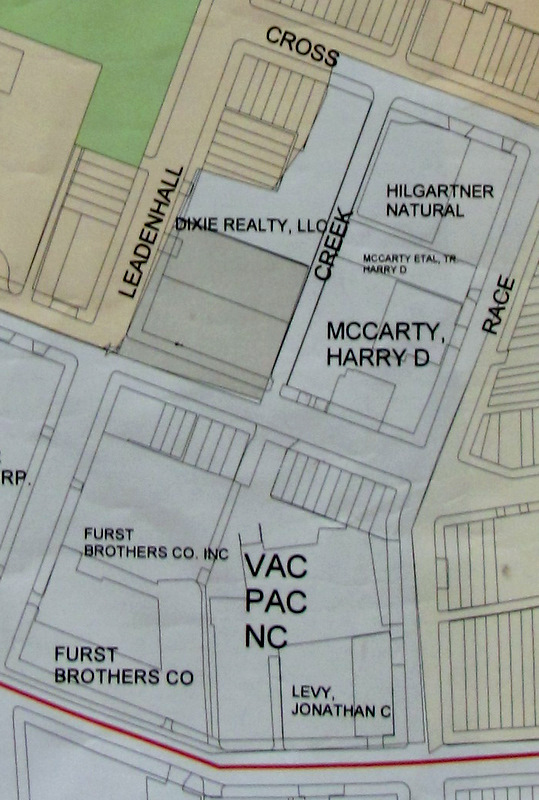 Caves Valley plans to acquire all of the land (shown in light blue) between Leadenhall and Race streets, Cross and Ostend (red line).

But lining up office tenants is a work in progress, and office construction is being planned as a second stage of the project not likely to begin before 2016 or 2017.

Compared to Mirmiran’s concerns over infrastructure and office space, residents wondered if they would be able to afford all of the improvements.

“The fear has been that Sharp-Leadenhall apartments will up on the rent” and price out current residents, Bland-Thomas said.

“We know that we can’t stop development. Especially once the casino went up, we knew there was going to be increased interest in this neighborhood.”

She said her group was “inclusive” and would embrace residents with different levels of income.

“But we’re going to have to have more conversations with you,” she warned Mirmiran. “We want to engage and have a say in our future.”

Mirmiran said Caves Valley, which has yet to submit any detailed plans to the city, seeks the same harmony. “Anything we say we will deliver, we will deliver,” he promised.