When word got out two weeks ago that the City Council is asking for a status update on the Charm City Circulator and a discussion of its finances and future – including the possibility of charging a fee for the service – public reaction was quick and negative.

Just as quickly, Council President Bernard C. “Jack” Young and other politicians backed off by calling any decision about a fee premature.

“It’s not even a proposal,” James Kraft, who represents the southeast’s 1st District, said yesterday. “I don’t think the majority of the Council wants to charge for it. But we all wanted an update. Who is riding it? How much does it cost?”

Started in 2010, the system has served 14 million passengers, according to city transportation officials. Highly popular in car-congested Mount Vernon and South Baltimore, the service is allegedly costing more than its annual subsidy from city parking garage taxes.

Expanding service, as proposed to Charles Village, would add to its operating costs and require the acquisition of new hybrid buses that each cost about $500,000.

Getting Drivers Out of Their Cars

The Circulator was created by former Mayor Sheila Dixon to reduce short-distance trips in areas where parking is a problem and make it easy for people who might otherwise drive to get out of their cars. Visitors to downtown sporting events and performances use the Circulator as well. So do tourists.

Although its coverage area and hours are limited – most weeknights during the winter it shuts down at 8 p.m. – some residents use it as an alternative to the MTA buses because it is faster. A mobile app tracks the buses, which typically run every 15 minutes or so, in real time.

“I use the Banner Route and the Purple Route,” said a South Baltimore mom carrying a toddler on Key Highway yesterday. “It’s better than dealing with parking.”

Young asked representatives from the departments of transportation and finance to report on the Circulator’s costs and ridership, as well as whether the revenue sources (mostly city parking garage taxes) have proven to be sufficient.

“The point is, to confirm the overall health of the program and solicit recommendations to make sure that the system is sustainable for the long-term,” said Lester Davis, Young’s spokesman. “The fee is really not the point of the legislation at all.”

The Council will also discuss the contents of a future Request for Proposals (RFP) to operate the Circulator, including the possibility of charging $1 for each ride. 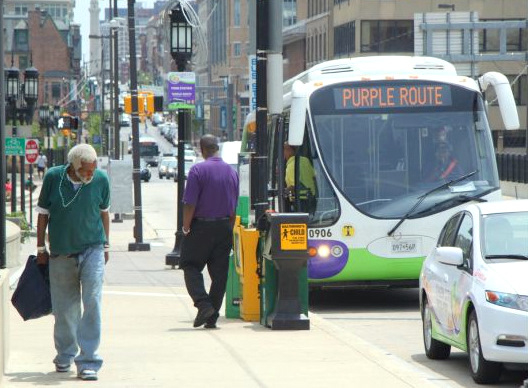 The plan to extend the Purple Route from Penn Station north to 33rd Street/Johns Hopkins Homewood campus has not been finalized. (Photo by Fern Shen)

The city Department of Transportation (DOT) is keeping the Circulator’s finances under close guard.

Its spokeswoman, Adrienne Barnes, has failed to respond to requests for recent ridership numbers and to unverified reports that the Circulator is operating at a deficit. (Historically, the service has been budgeted at $7 million a year.)

The expansion of the Purple Route to 33rd Street in Charles Village – promised by Mayor Stephanie Rawlings-Blake in her 2012 State of the City address – will add to the route’s cost, especially if additional buses (to keep the Circulator on the 10-15 minute schedule) are purchased.

Two years ago, a top transportation official told The Brew that extending the Circulator to Charles Village would require about $700,000-$900,000 in yearly operating costs as well as three new buses (about $1.5 million).

Start-up of the extended Purple Route, originally set for fall 2014, has not been announced by DOT or disclosed on the Circulator’s website.

Challenges in the Southeast

Kraft has been talking about a Canton extension of the Circulator for years. He said he has the mayor’s support, it’s just a matter of finding the funding.

One proposal, he said, is for a Circulator along the Aliceanna/Boston streets corridor from Harbor East to the new Canton Crossing shopping center.

“We’d need a couple million dollars just to get started,” he said, referring to the two hybrid buses and drivers. Kraft has been meeting with businesses and major employers in Canton who have expressed interest in financially supporting the extension.

“Perhaps it would start off running a few days a week, maybe Friday, Saturday, and Sunday, until we assess the ridership,” he said.

Not a Replacement for the MTA

When asked if he thought large employers would consider funding the Circulator, Michael Evitts, vice president of the Downtown Partnership, said the organization has never asked them.

“I think perhaps downtown businesses already feel like they are paying for the service as it is currently configured, by virtue of the parking lot tax,” he said.

“The Circulator evolved out of a downtown shuttle in the mid-90s. There was a parking shortage,” he said. “It was a way to connect riders to existing modes of transportation. It was about inter-connecting. It was not a replacement for the MTA.”

From the Partnership’s perspective, downtown is the fastest growing and most densely populated residential area in the city, and a natural home for the Circulator.

Expanding the Circulator routes outside of that immediate area, “if it’s done deliberately,” he said, “could be a good idea.” So might a Circulator advisory board, he added.

“But permanent renewable funding is the key. That’s the challenge for the Circulator.”