In the wake of a September 24 fire that scorched the historic but crumbling Mayfair Theatre, the city-owned building next door to the theater became an unsecured and hazardous structure, with holes large enough for a person to easily crawl inside.

The front door of the 300 West Franklin Street annex building had a place for a padlock, but with no lock on it, it could be pushed open easily.

The Brew looked at that building early this morning and it was as open-to-the-public as ever. The Mayfair seems to largely be secure, though it  still appeared to be accessible from the rear.

Following our emailed query early this morning, the building’s openings facing Howard Street have been re-boarded up, apparently by contractors dispatched by the city. (Though there was no sign of a padlock when we looked.)

Nancy Jordan-Howard, chief operating officer of the Baltimore Development Corp., said the agency had to wait for a right-of-entry permit from the housing department before it could send a crew into the properties. (She said BDC staff had “recently discovered” the openings in the buildings.)

Area residents had been worried for weeks that the building, at the busy corner of Howard and Franklin streets, was unstable and could inflict more damage on the historic Mayfair and other nearby buildings, such as the former Congress Hotel, now an apartment building. 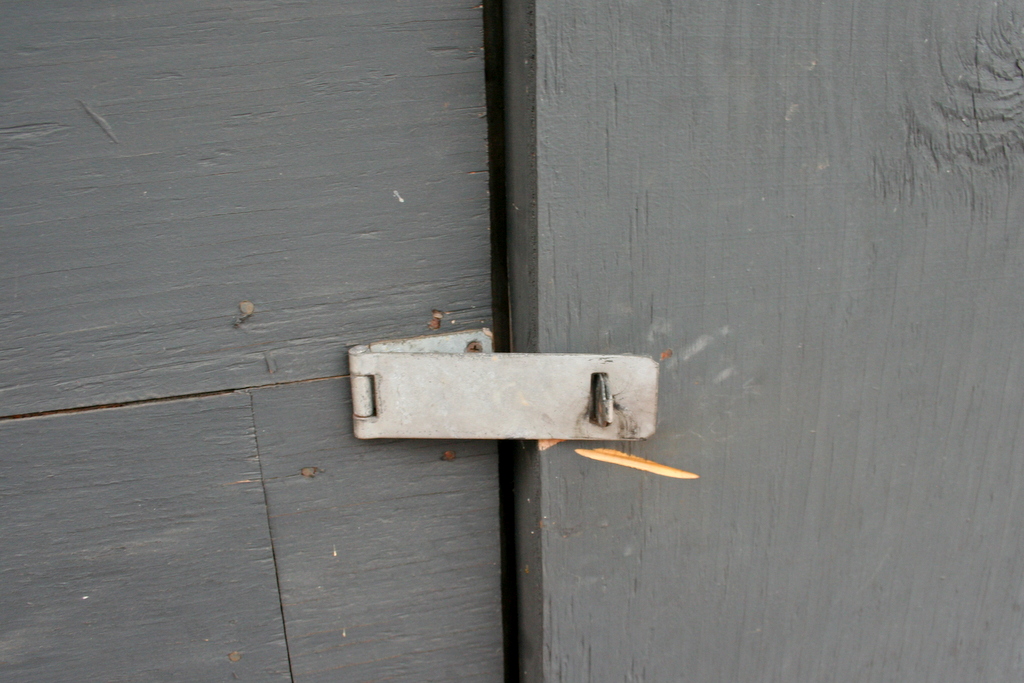 No padlock, so the corner entrance door of  the building was open to anyone who wants to enter. (Photo by Danielle Sweeney)

“The [burned] building is a ruin,” said Emil Volcheck, director of the Baltimore Ethical Society, which has its headquarters in the Congress Hotel building that is adjacent to the rear of  the Mayfair and 300 West Franklin.

“When I look out the window from the society, I wonder whether the rubble will spill out into the alley. The wooden retaining wall looks flimsy,” Volcheck said, adding that the rear of the Mayfair itself was open last time he checked.

“What if children go in there to play?” he asked.

The Mayfair, a 1903 theater building at 506 North Howard Street, hosted vaudeville troupes and other touring acts in its heyday and seated up to 2,000 people. 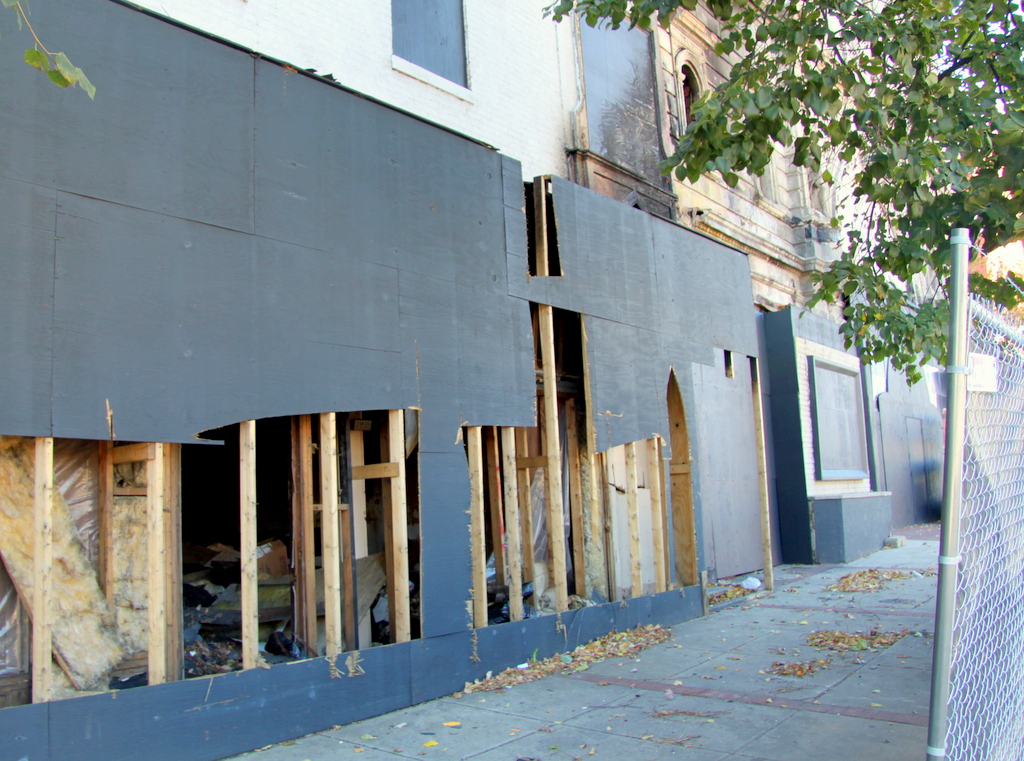 On the side of the building facing Howard Street, it has been open to the weather and sidewalk foot traffic. (Photo by Fern Shen)

In an earlier incarnation, it was called the Auditorium and advertised grand performances – and for a while it had an ice skating rink. The building in that spot previously had a swimming pool and was known as the Natatorium.

Like many historic buildings on the west side of downtown, Baltimore’s old shopping district, the Mayfair has been vacant for years, admired for its ornate stone facade and namesake marquee, but essentially left to rot.

Danger for the Homeless

Linda Joy Burke, a member of the Ethical Society, has been taking photos of the Mayfair and nearby abandoned buildings since before the fire. She worries that the Westside’s homeless community could do more damage to the frail buildings or worse, get hurt inside.

“There are homeless people around here. They drink and fall asleep on the sidewalk. It’s going to be a cold winter and they will be looking for shelter. My fear is someone goes in there, something falls on them and they get crushed. Who would even know they were inside?,” she said, adding. “This is an ethical issue.”

This morning, coffee cups and potato chip bags could be seen inside.

Burke also fears a person could start a fire inside trying to keep warm. “They are predicting a cold winter for Baltimore,” she noted.

The Brew contacted Baltimore City Fire Department spokesman Roman Clark regarding what caused the fire at the Mayfair, (which is located at 508 North Howard Street). He acknowledged the email, but has not yet replied.

Tropea added that the building to the left of the Mayfair where the fire took place is technically an annex to 300 West Franklin. 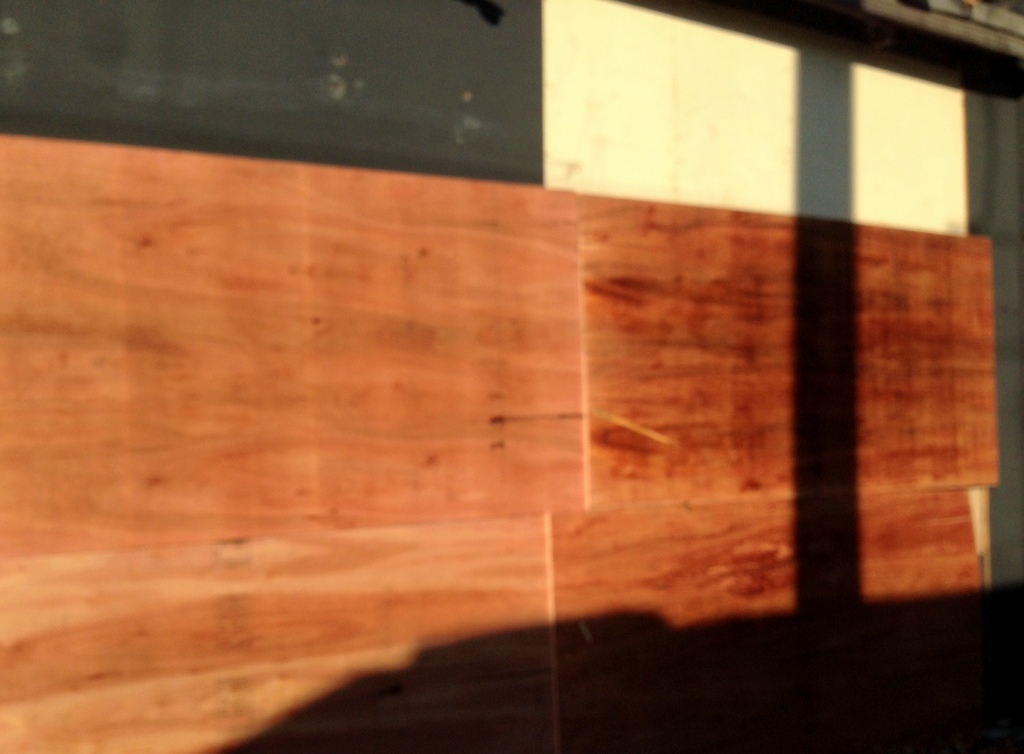 This morning, a few hours after our inquiry to the city, the gaps had been boarded up. (Photo by Danielle Sweeney)

“We have at least one Sanborn Atlas here at the Maryland Historical Society that shows that building as an annex to the hotel on the corner,” Tropea said.

Today the BDC said that the September fire was likely caused by sparks from the removal of the Mayfair’s marquee by a private contractor supervised by the Downtown Partnership.

The marquee was being removed “for safety reasons,” the agency said. Downtown Partnership spokesman Michael Evitts responded to an email from The Brew about the fire:

“In coordination with the City, we engaged a private firm AtoZ to remove the marquee at the Mayfair because it was structurally unsound and seemed ready to come down on its own. We also thought that the removal of the marquee would expose a more attractive facade, which would make the building more appealing for future reuse,” he wrote.

“In the summer, we obtained approval from the Maryland Historic Trust to remove the marquee. Work done by the contractor was found to be the cause of the fire next to the Mayfair, and the City has been provided information about the contractor’s insurance coverage,” Evitts continued

“It is unclear whether there will be any damage to be covered by the insurance, since the building was in very bad condition prior to the fire. The Mayfair itself sustained little to no damage.” 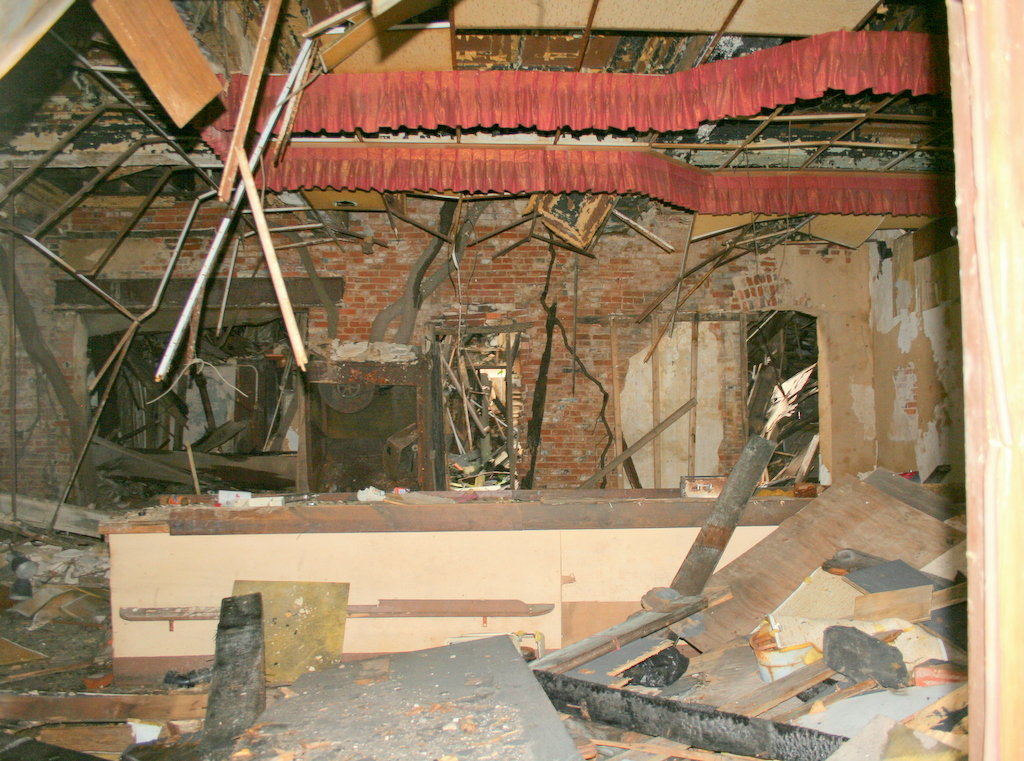 The burned-out interior, where there were paper coffee cups and other trash. (Photo by Danielle Sweeney) 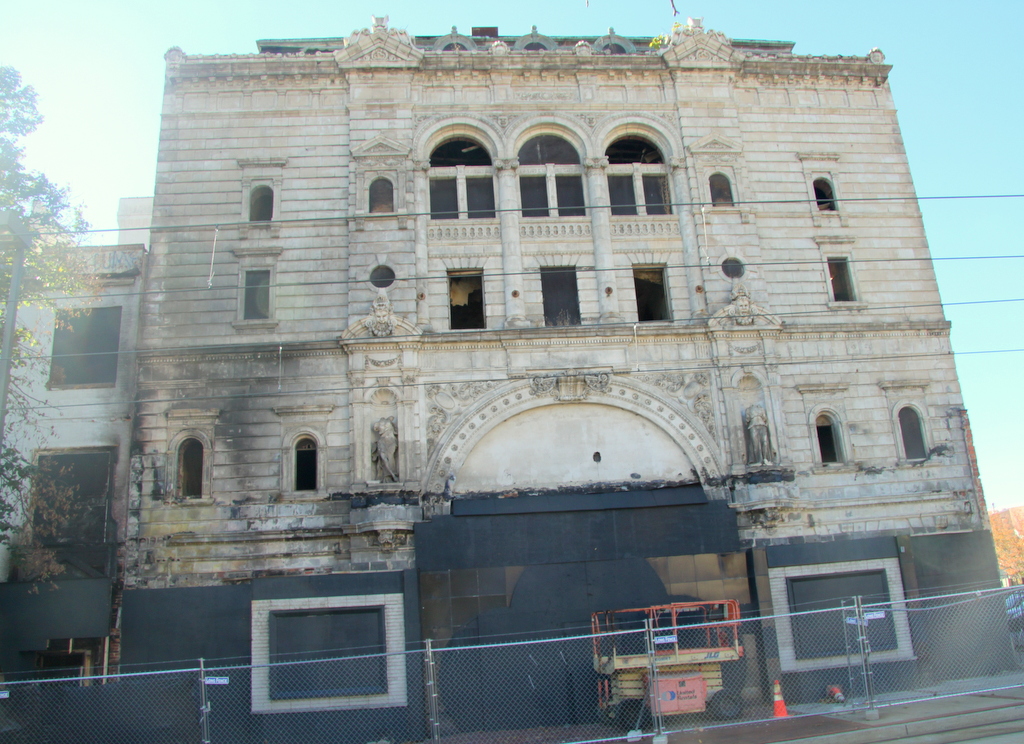 The historic, but badly deteriorating, Mayfair Theatre was damaged by the Sept. 24 fire in the building next door. (Photo by Fern Shen) 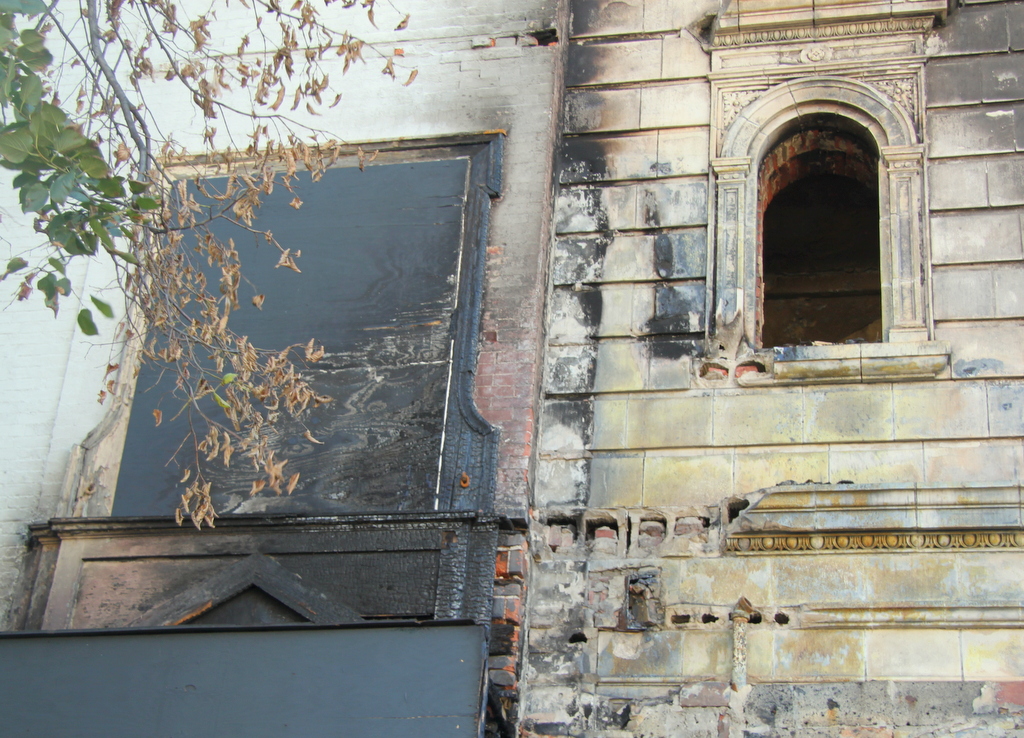 Fire damage to the Mayfair (right) can be seen from Howard Street. (Photo by Fern Shen)