After The Brew published a city bus rider’s cri de coeur – Brian Levy’s October 27 account of trying to get to and from work on the horribly crowded, frequently late #13 bus on North Avenue – the Maryland Transit Administration said it would respond.

The agency had much to respond to judging by the reaction to Levy’s piece.

More than 100 overwhelmingly negative comments were offered by readers, many of them bus riders, about years of poor service and perceived deep institutional problems at MTA ranging from mismanagement to a poorly designed system and a lack of commitment to city-dwelling transit users.

MTA spokesman Paul Shepard promised an an op-ed response that would presumably address the big themes but also sent some emailed answers to our initial questions about the #13 and put two MTA officials on the phone to talk to The Brew about it.

Shepard now says the promised op-ed is taking longer than the agency thought.

As we wait for the article, we thought we’d share what MTA sees as the problems plaguing #13, a major east-west carrier that runs the length of North Avenue, and what it plans to do about them.

The short answer: it’s all being studied.

“The MTA has launched a route study. . . to determine whether the overcrowding is, in fact, occurring,”  Shepard told The Brew. If overcrowding is found, articulated buses might be used to solve the problem in the short-term.

As part of a broader solution, the agency is analyzing the 13 route as part of a comprehensive review of the system known as the Bus Network Improvement Project (BNIP).

What is the MTA doing right now to improve reliability?

“Improving our on-street monitoring processes, adding staff and improving use of technology to streamline real-time management of the bus system,” Shepard replied.

What are the on-time statistics for the #13?

Regarding crime, which Shepard says is at “historic lows” on all MTA modes (bus, light rail and Metro), this is how the agency describes its approach to addressing trouble spots:

“If MTA notices an increase in criminal activity on any particular mode, MTA police will deploy a number of strategies to ensure our patrons safety that may include directed patrol in uniform, additional plain clothes officer placements, increase use of CCTV cameras, and employ local police mutual aid agreements.”

Waiting for the Study

None of this seemed like it would be very satisfying to #13 riders standing in the rain (or our angry commenters), so we pursued some of these questions on the phone.

Primarily we wanted to know how long has the route-study been going on, and when would it be completed and fixes implemented?

“So actually the Route Study has been going on there for quite some time,” said Michael Walk, director of service development and the person in charge of schedules and routes.

“It as well as other routes are all under study as part of BNIP and so we’ve been looking at the customer complaints coming in and watching the trends there, as well as the route’s ridership and what’s been happening along the route. . . We’ve been trying to identify solutions for some of the same problems your readers have identified in their comments.”

Why not just put more buses on the route?

“One of the things that we can look at especially for overcrowding is to ensure that we put the appropriate equipment on that line for specific blocks, blocks of times of day,” said Kim Bush, director of the operations control center.

“For example, we have buses that are called articulated buses and they can carry about 25-30 more people than our [regular] buses,” Bush said.

“So that’s a short term solution – that’s really the main thing we’ll look at. And ensure that we’re getting the buses out and on time and properly make sure that we’re not late drastically on that particular line,” she said.

A Spike in Complaints

During this conversation two weeks ago, Shepard spoke up to say that MTA only “really recently saw the spike in complaints in the 13 line, and that’s what motivated us to move toward the route study.” 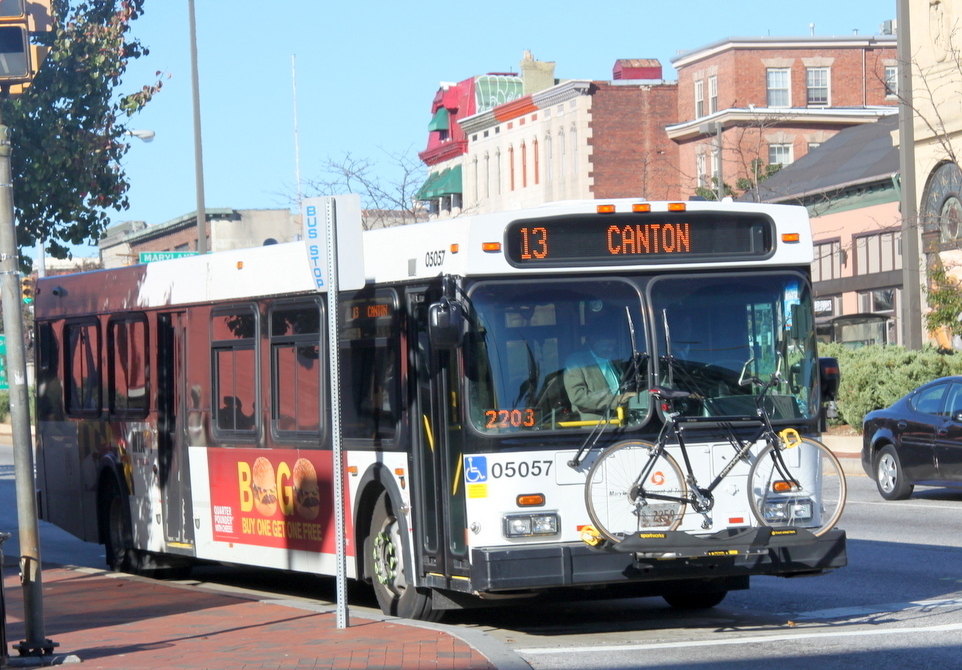 MTA said they are studying how to correct problems on the #13 bus, described by a passenger as chronically late and crowded. (Photo by Fern Shen)

This was confusing since the officials earlier said the route study was part of systemwide study of routes commenced as part of the BNIP, which began more than a year ago.

So did a spike in complaints prompt the study of the 13 route? When did the spike start, we asked.

“The spike has been going on for. . . I would have to get the people from customer service here, but it’s just been a matter of weeks,” Shepard said.

“And we’re not talking about a dramatic, dramatic increase. We’re just seeing more than we would want to see. We don’t want to see any complaints coming in.”

Moving back to the apparently linchpin BNIP study, when will it be completed?

As part of this question, we read to the officials some observations from Brew commenters who described the BNIP as not serious and who called the Phase I portion, released last February, as “laughably limited.”

(When the BNIP was announced in September 2013 by MTA administrator Robert L. Smith, he said the whole thing would be completed in eight months.)

Walk responded, “We’ve always communicated the same message, which is, we have the timeline. . .  Instead of releasing the whole plan, we’re still working on the entire plan which is that multi-year, multi-phase approach.”

He continued, “There are issues that we address over time. . . I mean that’s not the end of the story, you know, there is more to come. I can understand this person, the frustration. . .We got out the door what we could of the Phase One plan rather than making people wait for that until we finish whole thing. I mean, we we are still working on the whole thing, and we just ask people for patience.”

Not Even a Guesstimate?

At this point, we asked, when did they think the study would be completed?

“When was the last time there has been a comprehensive look at the schedule?” Shepard asked Walk.  Walk responded, in agreement, “It’s been over a decade and, really, there was a lot of work to be done.”

Given all that, we asked, when does MTA estimate it will be finished?

“What I learned from the last time. . . people are working very hard on it,” Walk said. “I don’t want to put a date out it right now in terms of doing it right and getting it out right. . . We’re asking all the people who subscribe to the program to have patience. . . and it will come when it is the right plan.”

Having no luck getting a timeline on BNIP, we thought we might nail down the expected date for a particular feature that city buses don’t have but Charm City Circulators do – the Real Time Departures function.

When working properly, this feature lets riders know when the bus is actually coming, and how much it’s running early or late.

At “the end of the year or maybe next year” there will be a soft launch, Shepard said.

Asked if a “soft launch” meant that just a few lines would get it, he said, “That hasn’t been finalized.”

Touching on a theme of some of the harsher Brew commenters, who suggested the MTA is a state agency with little regard for city transit users, we asked Walk and Bush if they live in the city.

Neither employee does. To which point, Shepard said that MTA employees use the service to get from office to office downtown and, regardless of where they live, all employees consider good service “to be a serious matter.”

“We want people to be happy,” he said.