The belated discovery of subgrade cracks under Dundalk Avenue – two years after reconstruction of the road began – will add $3.4 million to the project’s price tag and take seven more months to complete.

The Dundalk Avenue Streetscape, keystone of the city’s SouthEast Road Reconstruction Project, was started in November 2012 to enhance the appearance of the thoroughfare from Eastern Avenue to the city line at Williams Avenue.

The project was originally due to be finished next month. But last week the city Department of Transportation informed the Board of Estimates that “sub-grade failures” have been detected “throughout the entire project.”

Without comment, the spending board approved a $3.4 million Extra Work Order (“EWO”) for the contractor, Civil Construction LLC, to remove the defective subsurface and replace it with 25,000 square yards of fresh concrete.

Coming in the wake of a $1.1 million EWO approved in September by the board, the Dundalk Streetscape is now 32% above its original price of $14.2 million.

Why Not Found Earlier?

Asked why the sub-grade failures had not been detected earlier, DOT spokeswoman Adrienne D. Barnes explained that the roadway is made up of a base of concrete and a two-inch surface of asphalt.

Design work done by DOT prior to the contract letting did not uncover significant issues with the concrete sub-grade. So the contractor went ahead with rebuilding the curbing, sidewalks, conduits, median strip, etc., before it began removing the old asphalt in preparation for a new road surface.

It was then that the large number of cracks and fissures in the sub-grade base were discovered, according to Barnes.

“Extensive roadway base failures became evident after we milled the road for paving,” she explained in response to questions from The Brew.

“During the design process, pavement cores were taken to determine the condition of roadway base and areas were identified for base repair. At that time we did not find base failures to this degree, but it was hard to estimate the extent of the failures before milling” or removing the surface asphalt prior to resurfacing. 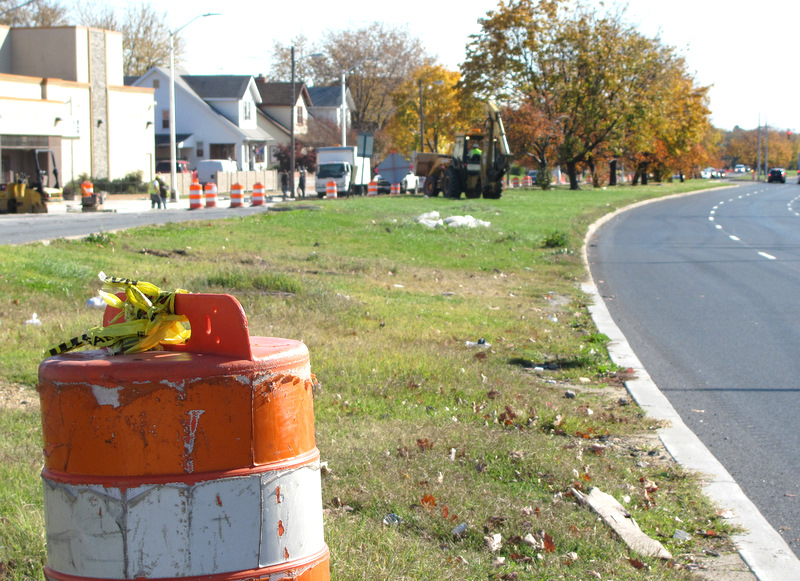 Barnes said such sub-grade failures can be caused by water leaking from underground water lines in the street that “can wash out fine material from sub-grade,” from the age of the material, from surface water seeping through roadway joints, and from heavy traffic loads.

Dundalk Avenue is noted for the large volume of heavy trucks that use the roadway to reach the Maryland Port Administration’s Dundalk Terminal and other industrial sites.

Removal of the defective concrete, especially along the northbound lanes, has caused the project’s completion date to be extended to July 15, 2015.

So far, most of the Dundalk Streetscape project has been paid with federal highway dollars, but a significant amount – $4.66 million – also came from city water revenue bonds.

The Board of Estimates last week transferred $2.99 million from a federal highway construction reserve maintained by DOT and $749,000 from a conduit replacement program to pay for the repair work.

The transfers totaled $3,746,875, or $340,625 above the amount going to Civil Construction, to cover the overall costs (including administration and inspections) of the new roadway repairs.

The Dundalk streetscape is among several projects aimed at improving access to the Port of Baltimore.

They include the reconstruction of Broening Highway and improved intersections and pedestrian crossings along the eastern portions of Boston and O’Donnell streets.