Mark Washington tries to keep a sense of humor about the soiled mattresses.

“We used to joke that people in our neighborhood must have a lot of bladder control problems,” he says to activist and neighbor Shawn James as they stand in an alley near Lake Montebello.

“What else could it be?” he adds with an undertone of sarcasm.

Washington was referring to the most recently ditched mattresses that are leaning against a hand-scrawled “No Dumping” sign in the alley.

It didn’t take Washington and James long to figure out that the mattresses might be more than incontinent neighbors’ discards and that a good portion were the likely leavings of commercial dumping by construction companies, demolition crews, rogue haulers and others.

“But, you know, we do have a lot of cheap mattress stores around here. We’re going to look into that, too,” Washington says, taking The Brew on a recent tour of some of the neighborhood’s dump sites.

A Decade of Dumping

Just as the Northeast community’s notorious tire problem stems from more than individual scofflaws, its mattress blight probably did as well.

“It’s been going on in CHUM for at least a decade,” says Washington, who is executive director of the Coldstream-Homestead-Montebello Community Development Corp.

Much of the CHUM neighborhood’s discarded mattresses, rubble, waste wood and other big trashed items, he said, come from low-end haulers, though residents, unfortunately, play a part, too.

“The message, ‘Take pride in where you live’ hasn’t gotten through to some of them yet,’” he says drily. 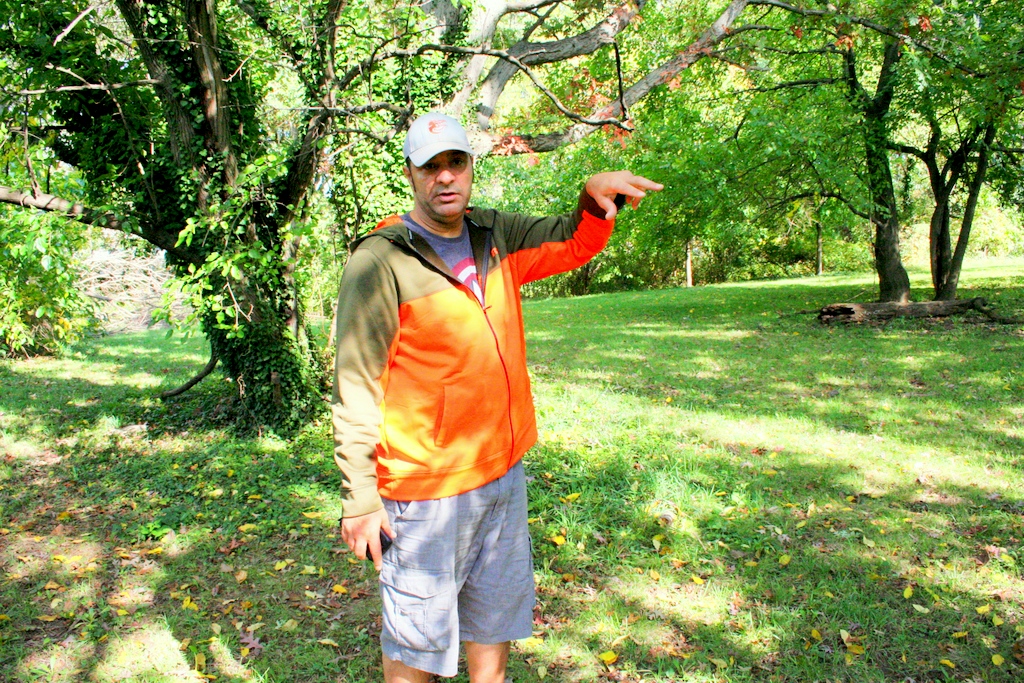 The community’s vacants and absentee landlords make matters worse, he says. “Dumpers are drawn to vacants.”

CHUM has experienced so much dumping, it is one of the housing department’s code enforcement dumping hotspots. Fed-up with the situation, residents have taken matters into their own hands.

The city, which has the primary responsibility for clean-up, works well with the community, according to Washington, who said CHUM has “a great relationship with DPW and code enforcement.”

In 2014, the city spent $16 million to clean up dumping outside of normal trash and bulk trash pickup, the Department of Public Works reports. Even so, the community has had to pitch in, Washington says.

“The city does their part. But they can’t do it all. And it’s a lot,” he said, explaining how the community’s own ad-hoc sanitation crew works. 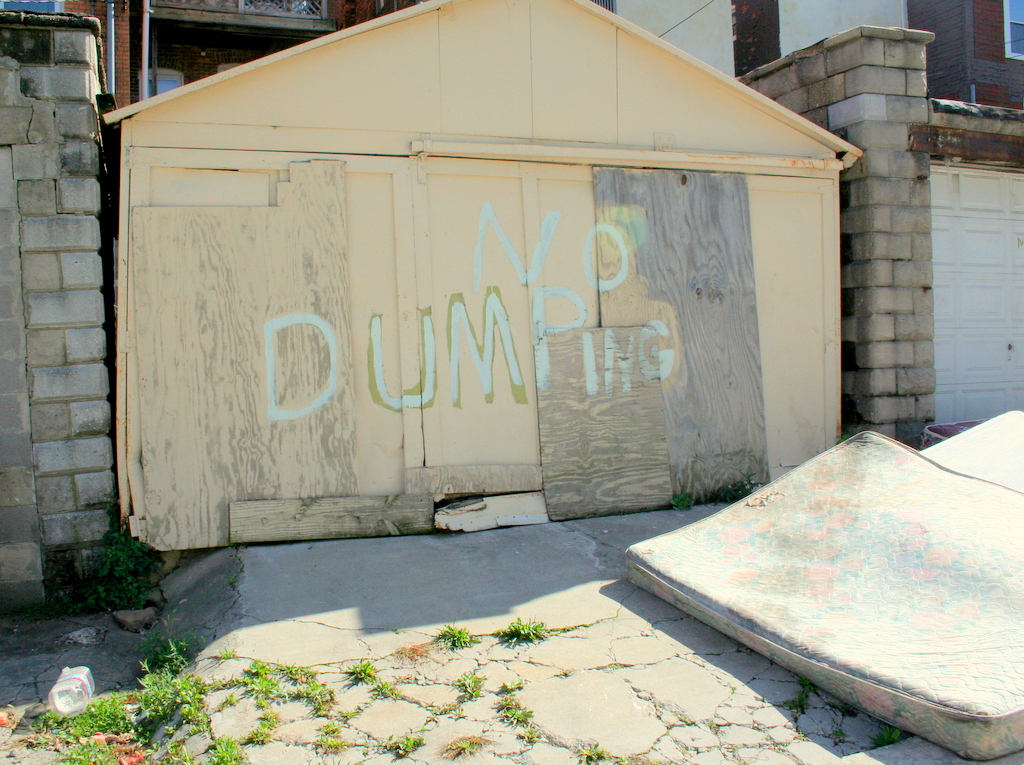 Explicit warnings don’t ward off the mattress dumpers in some CHUM alleys. (Photo by Danielle Sweeney)

A local business gives CHUM the use of a truck every week for cleanups and drop-offs at the city dump. It’s not a task that Washington and the other volunteers want to be doing on a weekend, but the cleanups are “a necessary evil.”

“We are stakeholders in this community. It’s incumbent upon us to spread the message that you can’t be dumping.” he said. CHUM volunteers hand out fliers, try to suss out who’s dumping from outside of the area, and tell residents the right way to dispose of unwanted items.

“The hard part is keeping up our momentum,” he says. CHUM is currently pursuing grant funding for a part-time staff person and a vehicle specifically to deal with trash and dumping.

“For a community the size of CHUM, it’s necessary to have a dedicated staff.”

It’s a subject Washington has thought about a lot. Lower-income areas are targeted by dumpers because they feel no one cares or is paying attention, and once dumpers find a spot, it’s hard to reclaim it.

He gives an example. Coldstream Park, off the 3000 block of Homewood Avenue, used to be full of drug dealers and addicts. An elementary school is located just down the hill, and the historic Patterson Family Cemetery lies less than 30 yards away.

That was until CHUM volunteers and youth got the area cleaned up and won grants for building and art projects, including erecting ceramic bollards to keep trucks and cars from dumping on the property.

There are no more tents pitched in the park or dealers handing out samples. “They are largely gone now,” Washington reports, “but the dumpers keep coming back.”

Tires, a ripped-out kitchen cabinet, a toaster, cast-iron frying pan, and chunk gravel and other construction debris were the most recent evidence of their presence. 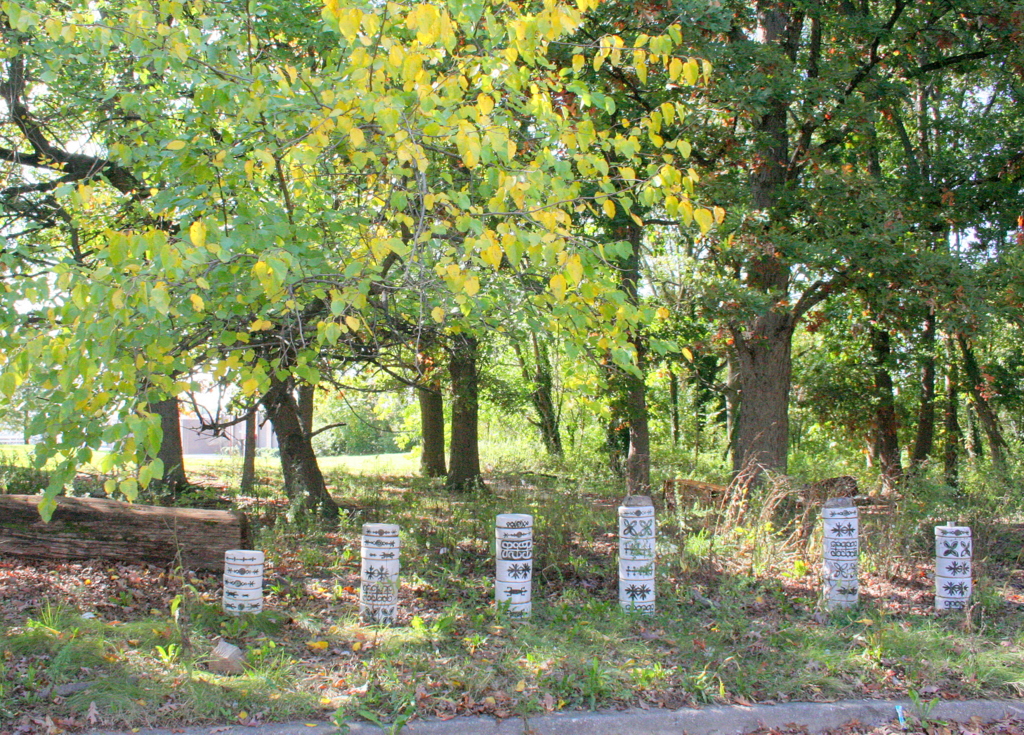 One tactic in the war against trash – ceramic bollards to keep dumpers from driving to their favorite dumping spots. (Photo by Danielle Sweeney)

“Do We Really Have That Many Flat Tires?”

If mattresses weren’t bad enough, Washington says that tire dumping is even worse and escalating in volume.

“There are no grocery stores here, but I think we have six or seven tire stores,” notes Washington during a drive along 25th Street near Harford Road.

“We even have one open 24 hours a day. Can you believe it? Twenty-four. Hours. A day. Do we really have that many flat tires here?”

Washington believes the proliferation of auto and tire stores is responsible for the tire dumping, which is rampant in the neighborhood and especially concentrated in parks and tire pits. (There’s one near the CSX railroad tracks north of 25th Street.) 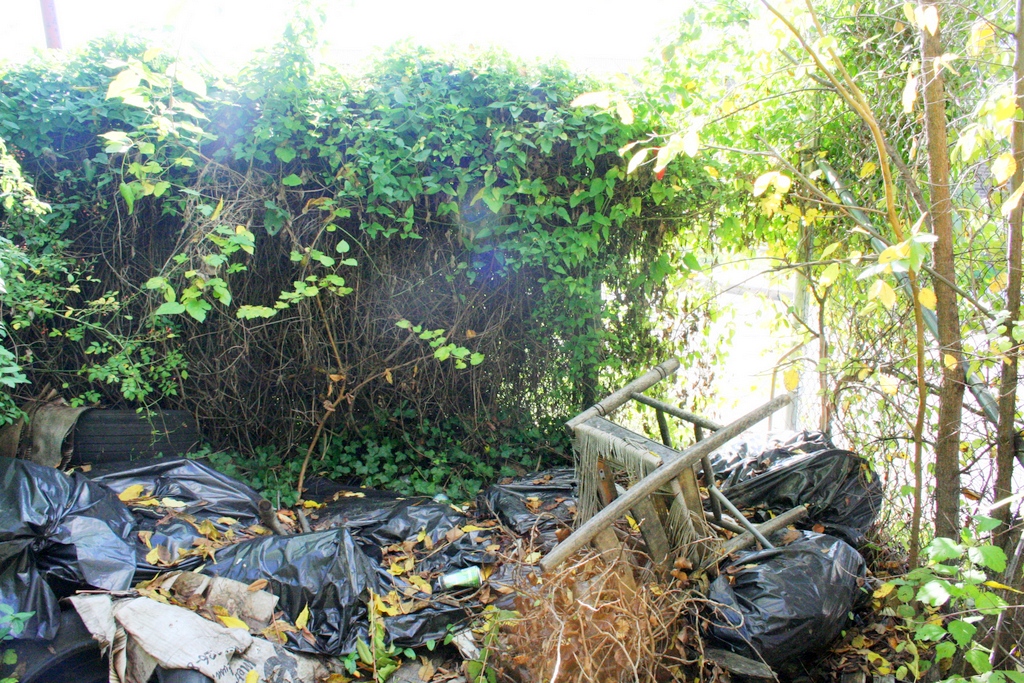 This trash pile in Coldstream Park is not far from an elementary school. (Photo by Danielle Sweeney)

“It’s gotten worse in the last year or so,” he says, noting that CHUM has asked the code enforcement section to do an investigation.

Overall, though, he says that there are fewer dumping spots than there used to be. “There’s a former drug house on Jennifer Avenue that used to be the site of a lot of dumping, and we’re seeing much less now.”

Slowly, he believes, the area is transforming.

“A cleaner neighborhood has a ripple effect on the whole community,” he says.”People take on a new outlook when the neighborhood looks good.

He stops to complete this thought. “The more headway we make, the more progress we see, the more it feels like one day we’re going to win.”