The Charm City Circulator’s $11.6 million cumulative operating deficit, announced by the Department of Finance last week, is only one of the free bus system’s money troubles.

Lax bookkeeping is another.

The study of the Circulator’s operations and financials to evaluate the service’s future viability highlighted several “critical issues,” including “significant problems tracking revenue and expenditure information.”

Most notably, “revenues from partners and contributors. . . [were] not being segregated from expenditures” and “operating expenses were charged against capital accounts well after operating expense accounts had been identified,” the study noted.

The full study was issued by the Law Department to The Brew last Wednesday through a Maryland Public Information Act request.

So far, the document has not been posted on the Department of Transportation, Charm City Circulator or Finance Department’s websites.

Performed by the Bureau of the Budget and Management Research (BBMR), the 65-page report also concluded that the agency did not identify the capital appropriation used for the Circulator and the Harbor Connector (a free harbor shuttle) as a separate account.

Not doing so “greatly increase[ed] the difficulty in reporting Circulator and Harbor Connector-related capital expenses,” the study noted.

Both operations are managed by the city’s Department of Transportation and contracted out to private vendors (Veolia Transdev in the case of the Circulator). 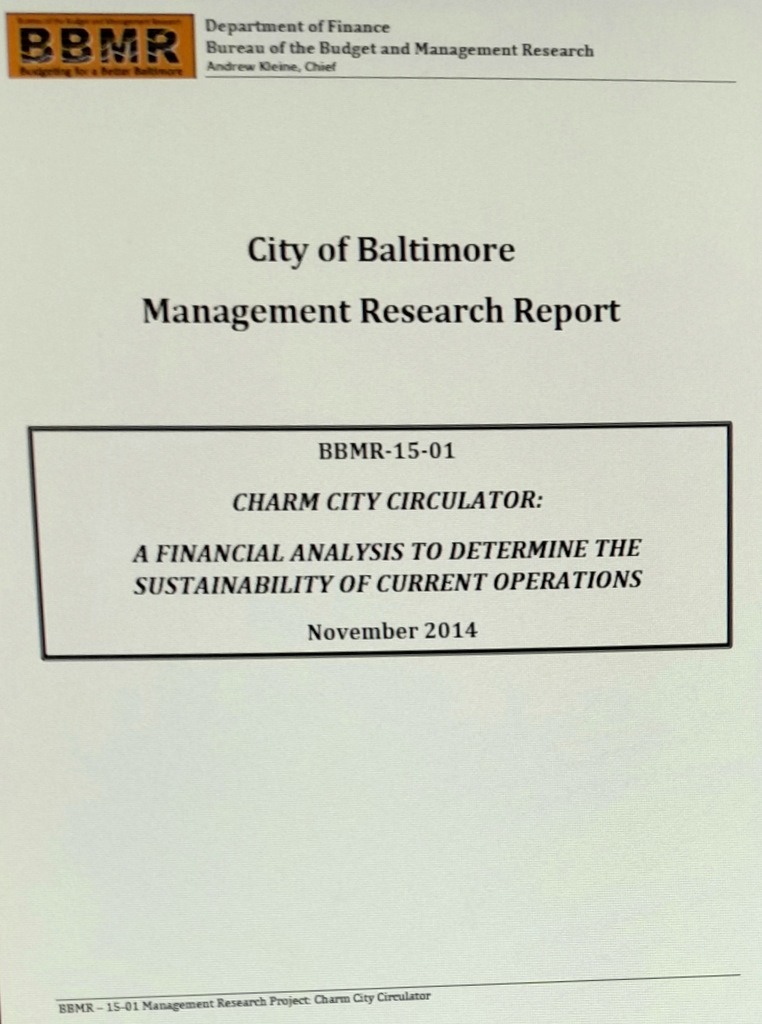 Cover page of report on Circulator’s finances released to The Brew through a PIA request. The report has not been posted so far on the DOT, BBMR or other city websites.

“Payments have been charged to outdated or old program designations in the accounting system, and in a select case, revenues were not applied to the appropriate grant account,” the report noted regarding DOT’s accounting practices.

The study said gaps in the Circulator’s financial reporting made a basic understanding of expenses hard to discern.

“Accurate financial reporting is key to providing a clear picture of the service – and the problems with reporting. . . present a distressing picture.”

Such lapses and confusion apparently contributed to an environment where Barry S. Robinson – DOT’s former chief of Transit and Marine Services who ran the Circulator and was indicted in October on two counts of bribery and one count of money laundering – could not only steal from the agency but easily cover up his alleged transgressions.

Ad Sales Come Up Short, but Robinson Gets Paid

The Circulator’s advertising sales fell far short of initial projections, but the study offered no explanation why – and made no mention of Robinson’s alleged scheme to profit from them.

Circulator advertising revenues were projected at $350,000 for FY 2010 and expected to rise in later years, but sales never took off. In fact, the study says the Circulator had only $50,000 in ad revenue through FY 2013.

In 2009, DOT entered into an agreement with Mjach Designs to do marketing and design for the Circulator. Part of Mjach’s contract was selling ads on the buses and in print collateral.

Mjach’s advertising rate cards for 2009 and 2010 indicate they handled Circulator advertiser billing. (The owner of the agency was contacted for this story, but has yet to reply.)

But according to the indictment, Robinson collected at least some of the ad money himself. One of the advertisers is described in the federal indictment as “Person A.”

In the spring of 2013, the indictment alleges that Robinson received a check for $40,000 from “Person A,” payable to the Baltimore City Director of Finance, as payment for Circulator advertising. 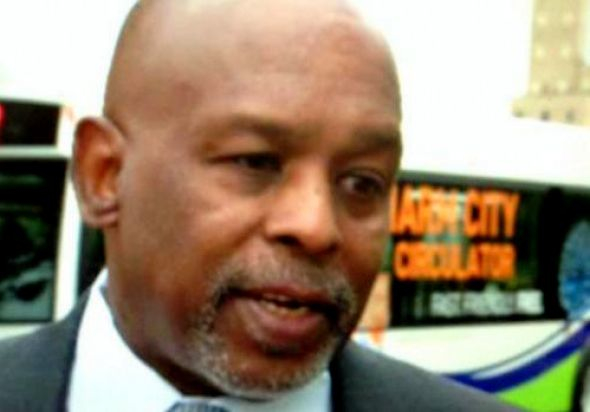 Barry Robinson touts the Circulator at a media event in 2011. (WJZ-TV)

Robinson allegedly returned the check to “Person A,” offering them a sweetheart option: he’d cancel the $40,000 debt and provide written documentation that it had been paid in exchange for $20,000 in cash for himself.

“Person A” declined the offer and the debt remained unpaid.

In January 2014, Robinson sweetened the deal, allegedly offering to extinguish $60,000 of city debt for “Person A” in return for $20,000 in cash, payable over the course of one month.

From January 23 to March 11, 2014, Robinson received four cash payments of $5,000 each from “Person A.” In return, the indictment alleges Robinson provided a signed letter on city letterhead falsely stating that the $60,000 debt had been paid.

Robinson deposited some of this money in another person’s bank account and was charged with money laundering.

Based on these results, the study “conservatively” projects that Circulator ad revenues will reach $120,000 for FY 2015 and will remain steady at that level in future years.

The former DOT division chief is also charged with trying to sell some of the Circulator’s capital assets—13 unused Circulator bus shelters, which he bought for the city in 2011 for about $249,000.

The indictment says they were paid for with a purchase order; however Robinson told “Person A” the city “didn’t know about them,” and he planned to take advantage of the city’s forgetfulness and sell them for his own benefit.

“Person A,” the indictment states, told Robinson he might know a buyer.

The indictment alleges Robinson then accepted $70,000 from “Person A” for the shelters in April 2014 to “pad” his impending retirement.

DOT has not explained how $249,000 worth of assets disappeared or how Robinson was able to hide the shelters without anyone apparently noticing.

In fact, recent media reports about the indictment say that DOT is still trying to recover the bus shelters, which Robinson was holding in a storage facility, when he resigned from the agency in October.
_________________________

PART 2: Options for fixing the cash-strapped Circulator include reduced hours, an axed route