Funding the popular but deficit-ridden Charm City Circulator will involve some compromise, and some disappointment.

A report from the Bureau of the Budget and Management Research (BBMR) has offered four options for funding the now-free bus service to reduce its projected $73 million deficit over the next 10 years.

All four options would establish a bus replacement fund, standardize bus hours and, hopefully, achieve a fund balance by year 2024.

The proposal calls for the Circulator to run shorter winter hours all year long and reduce Banner Route hours.

The Banner Route was established to provide easy access for tourists and residents to Fort McHenry in anticipation of the War of 1812 Bicentennial. The celebration ended last September. Reducing the route’s hours to coincide with the fort’s daylight hours of operation will save a projected $2 million over 10 years. 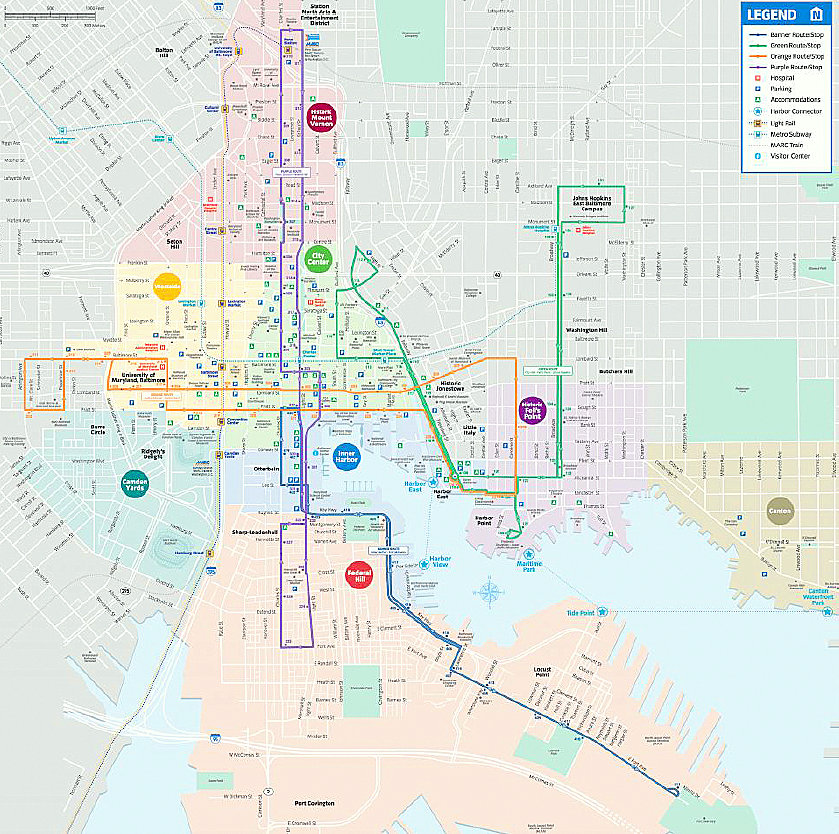 The first two options don’t introduce a fare for riders, but would reduce bus service and increase the city’s parking garage tax, which is the Circulator’s primary source of funding.

Option 1 would eliminate two buses from the Green Route (the third most popular route) and hike the city’s parking garage tax from 20% to 26%, with all new revenue put toward the Circulator’s operating fund.

This option would make possible the Purple Route’s long-anticipated expansion north from Penn Station to 33rd Street in Charles Village and south to Wells Street.

The Green Route was chosen for reduction, the study says, because it serves the fewest riders per dedicated bus (at a cost of about $4 per rider.)

Option 2 would eliminate two buses from the Green Route, and one bus each from the Orange and Purple routes. This would increase headway, with a resulting estimated wait time of about 20 minutes for the Purple Route, 15 for the Orange Route, and 20 for the Green Route. (Current optimal headway is about 10 minutes for all but the Banner Route, which has always had a 15 minute headway, according to the report.)

Additionally, Option 2 includes a comparatively modest parking tax increase – from 20 to 22%, again with all revenue put toward the Circulator’s operating fund.

However small the increase, the city’s parking tax has risen substantially in the past few years, and any parking tax increase will be unpopular.

In 2008, it was raised to 16%, with four percentage points of the total parking tax revenues identified for Circulator. The parking tax was increased to 20% in 2010 to help balance the Fiscal 2011 budget.

Any parking tax increase – or as the report delicately calls it, an “adjustment” – would need to be approved by the City Council.

Option Two also calls for increasing third-party contributions (the study suggests a partnership with Visit Baltimore, for example). This would allow for the Purple Route to expand in 2015. 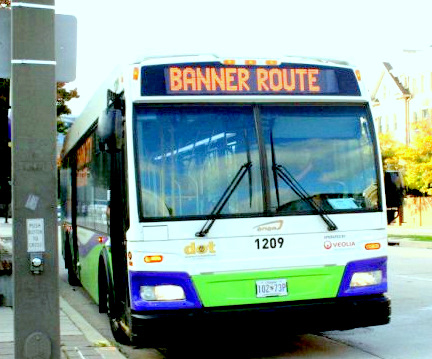 The Banner Route has become popular in South Baltimore even though it often (as in this case) carries few passengers. (Photo by Danielle Sweeney)

The four buses pulled from the other routes would serve the expanded Purple Route, the route with the highest ridership and the route most well connected to other modes of transportation.

With Option 2, the Banner Route would be discontinued.

The Banner has the lowest ridership and longest headway of all the routes, but has grown popular in South Baltimore.

It is close to the Harbor Connector boat that links Harborview to Harbor East.

Phasing out the Banner could ignite a fierce battle among the constituents of newly anointed 11th District Councilman Eric T. Costello.

No Increase in Parking Tax, but a $1 Fare

Option 3 eliminates two buses from the current Orange and Purple Routes (and three from the Green, reducing the Green Route to half its size), and also discontinues the Banner Route. This option would greatly increase estimated headway to 15 minutes for the Purple Route, 20 for the Orange Route – and 30 for the Green Route.

The scenario envisions higher third-party contributions (partnerships) and would institute a $1-per-ride fare. This option assumes that Maryland Transit Administration LOTS grants would be decreased because of the fare charge.

With this option, the report says (perhaps in error), that the Purple Route could expand to Charles Village beginning this month.

No Fare, but Limited Service

Option 4 significantly reduces Circulator service and provides no revenue increases. It would eliminate two buses from the Orange Route, three from the current Purple Route, and four from the Green Route, which would leave the Green Route with only two buses.

It would defer expansion of the Purple Route to Charles Villages to next July and would eliminate the Banner Route.

In this scenario, the headway for the Orange and Purple routes would be increased to 20 minutes each and to 30 for the Green Route. The upside of this option is that culling buses from the routes would increase the life cycle of the current Circulator fleet.

The BBMR recommends Option Two because it represents a combination of manageable service reduction and revenue enhancements.

The department views the smaller parking tax increase as more cost-effective than the introduction of a fare, which the study says will require an estimated $3.2 million start-up cost, and $800,000 to maintain in the first year.

Needless to say, the numbers in the report are all projections.

Among other things, they don’t take into consideration continued poor financial management of the Circulator by the Department of Transportation (DOT), which racked up a $11.6 million deficit in three years (2012-14) without any public disclosure.

Mayor Stephanie Rawlings-Blake and the Board of Estimates recently approved a $130,141 review of the Circulator’s “long-range financial operations alternatives” by Louis Berger Water Services, a New Jersey-based consulting group.

It is not known what this competing report will say – or when it will be completed.

In the meantime, the City Council is planning to hold a public hearing on the Circulator’s future in early 2015, according to Council President Bernard C. “Jack” Young.