The city’s termination of an agreement with a private foundation dedicated to unearthing the slave history of the Mt. Clare plantation has brought forth two conflicting narratives.

On one hand, supporters of the Carroll Park Foundation and its director, Pamela F. Charshee, say the group is on the cusp of putting together a unique educational resource that could match the significance of Mt. Vernon, the home of George Washington.

But according to others, the foundation has frustrated efforts to preserve the grounds of barrister Charles Carroll’s plantation at Carroll Park and has “hijacked” artifacts of slave and native American culture.

After simmering for years, the conflict has come to a boil with the Department of Recreation and Parks terminating its 1991 archaeological agreement with the foundation and demanding the return of artifacts by this coming Monday.

After pleading with officials to stop the eviction notice, Charshee has gone public, accusing Rec and Parks of jettisoning the proposed excavation of slave quarters in order to develop an “ersatz” history of the mansion’s role in the Civil War.

“Baltimore’s slave history is being thrown under the bus for reasons nobody is willing to talk about, and people are trying to find a way to discredit us,” Charshee said, speaking outside of the historic mansion that sits atop Carroll Park overlooking the city. 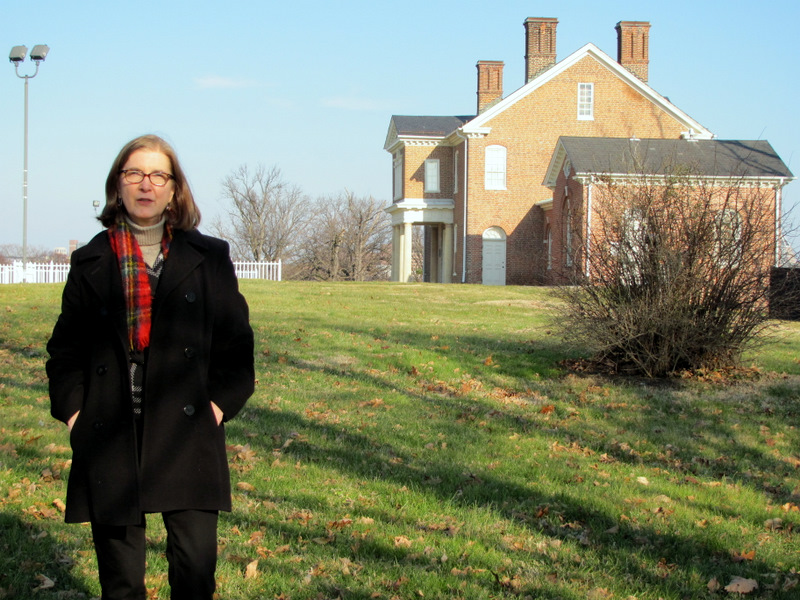 Pamela Charshee stands by the onetime quarters of slaves at Mt. Clare Mansion, seen in the background. The plantation was established in 1763, and slaves were used to mine bog iron found along Gwynns Falls. (Mark Reutter)

Charshee says the foundation has raised $235,000 in federal state and private funding for a heritage design plan and seeks to begin excavation of a 1770-era slave quarter.

“Instead of supporting these efforts, the city has capriciously terminated our 50-year license,” she says.

Ernest Burkeen, director of Rec and Parks who signed the termination letter, was asked by The Brew to address specific questions about the controversy. So far, he and the agency have not responded.

“Baltimore’s slave history is being thrown under the bus for reasons nobody is willing to talk about”  – Pamela Charshee.

Some people in the museum world are not unhappy about the ouster of Charshee. “I’m thrilled to know that the artifacts will come back to where they belong,” said an archivist who has worked at Mt. Clare Mansion.

This person, who demanded anonymity, said Charshee had taken personal control of the artifacts and refused to let them be displayed at the mansion.

Dr. Raymond A. Winbush, director of the Institute for Urban Research at Morgan State University, says the opposite is true – Charshee has preserved a historic record that the city was otherwise ready to destroy.

“Pam wants to preserve the true history of blacks in Baltimore, and there seems to be some resistance to that,” Winbush said. “Some people want an image of Maryland, even in its slave era, as a liberal place.”

Back in 2005, Charshee complained that a city project to improve storm drainage near the mansion was “bulldozing” highly significant archaeological areas around the building.

Later, Charshee faulted Rec and Parks for building a parking lot over another potential archaeological site – and complained that the Maryland Historical Trust (MHT) did nothing about it.

Rodney Little, director of MHT, said the city did do inappropriate utility work before it had received permission from the state agency, which holds an easement over the mansion property.

Little said MHT then held “the city’s feet to the the fire to make up for this” and its maintenance work around the mansion in recent years has been reasonably good.

According to both supporters and critics of Charshee, the tipping point came recently when a doctoral student, who had been involved in some of the digs, was denied access to the artifacts.

Charshee’s stewardship of the artifacts “was not deficient,” according to Little, but not making the material available to professionals (or the public) violated the group’s agreement with the city, he said.

Last August, Burkeen wrote to Charshee that “it has come to the attention of the city” that the archaeological collection, consisting of about 150 boxes, “has been removed from its location at the Baltimore Talent and Development High School without the permission of the city.”

Charshee responded that the collection was removed to a commercial storage center because the school had been closed by the city. After Burkeen demanded that the foundation provide “an inventory and condition report of all artifacts, where they are located and how they are being maintained,” Charshee asked to meet with the department and the mayor’s office.

She said she wanted “to establish a collection management policy” and discuss new projects that the foundation could undertake.

Instead of holding the meeting, Burkeen sent a certified letter to Charshee – “it came as a total surprise,” she said – terminating the city’s agreement with the foundation and demanding that it return of the collection by December 29, 2014.

Since then, Charshee has appealed to Mayor Stephanie Rawlings-Blake, U.S. Rep. Elijah E. Cummings, U.S. Senator Ben Cardin and members of the City Council – to no avail, she says.

Writing on behalf of Rawlings-Blake, Deputy Mayor Colin Tarbert told Charshee on November 26, “I have been briefed by both the Baltimore City Department of Recreation and Parks and the Maryland Historical Trust on the condition of the collection, and I concur with the action that has been taken.”

Tarbert asked for her “full cooperation in transferring the collection back to the city as soon as possible.”

Frustrated by the city’s response, Charshee says she is asking the public to help her continue her preservation efforts.

“If we go away, there will be further intrusions in this archaeological site, more digging of more trenches, and a fabulous piece of African-American history will be permanently destroyed,” she said.

Little says he, too, is a supporter of preserving the slave history at Mt. Clare. But from his perspective, the issue boils down to this – “a substantial and apparently irreconcilable personality conflict between the foundation and the city.”