The station wagon with the smashed windshield that drove away from Saturday’s fatal Roland Avenue bike crash was gone for close to 45 minutes – not the reported 20 – before returning to the scene, according to a reliable witness interviewed by The Brew.

The woman, a Roland Park resident who was at the crash scene minutes after it happened, said she pulled over – horrified by the sight of the inert bicyclist – and remained there.

“When I arrived, I saw a group of teenage boys and also a Fed-Ex truck. The boys and Fed-Ex truck may have been the first to see the accident. People were already calling the police, when I arrived,” said the woman, who remained in her car watching.

The car that had struck cyclist Thomas Palermo was not there while she watched the first responders work, but after a time – a long time, she said – it pulled up.

As first reported in The Brew, Right Rev. Eugene Taylor Sutton told Episcopal clergy yesterday that the driver of the car was newly ordained Bishop Heather Elizabeth Cook and that she “returned after about 20 minutes to take responsibility for her actions.”

But this eyewitness said it was much longer before the green Subaru station wagon rolled up to the 5700 block of Roland, near the Bellemore Road intersection. 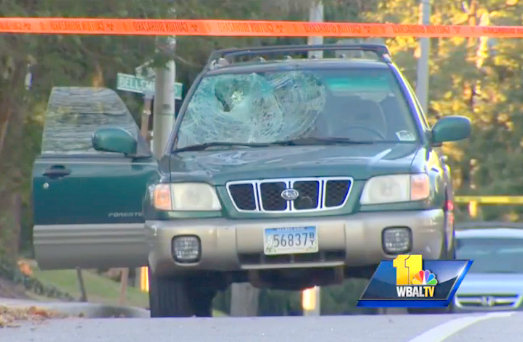 The Maryland vehicle tag number on Bishop Cook’s damaged car is the same as recorded by the Caroline County sheriff’s deputy who arrested her on DUI and drug possession charges in 2010. (Photo credit: WBAL TV11)

“One thing I can tell you is, it wasn’t 20 minutes. It was closer to 45 before she came back,” recalled the source, who asked that her name not be used.

“She pulled up with that busted windshield and got out of her car. The police talked to her and put her in the back of the police car.”

Moncure Lyon, who was riding his bike in the area and was one of the first people to arrive on the scene, agreed that it was a long time before the car returned.

The bike community and the public at large have been clamoring for information about the fatal crash in which, essentially, the #2 official in the hierarchy of the Episcopal Diocese of Maryland appears to have crashed into, and abandoned for a time, a bicyclist apparently riding in a designated bike lane.

Baltimore police today refused to release the police report or confirm the identity of the driver or give out any substantive details about the crash that killed the 41-year-old father of two and how it was handled on Saturday.

“These investigations are complex and intricate, often requiring detailed reconstruction and forensic examination. This is still a very active investigation that is being handled by our C.R.A.S.H. Team,” said acting Capt. J. Eric Kowalczyk, of the media relations department, in an email sent this afternoon.

“In order not to jeopardize any potential prosecution, specific evidentiary details will not be released at this time,” Kowalczyk said, noting that police are not confirming the name of the driver, among other details.

Among the questions The Brew had asked, in an email to police:

What were the circumstances of the crash? How long before Cook returned to the scene? Why was she not arrested for failing to remain at the scene upon returning in a car with a huge indentation in the cracked windshield? Was a breathalyzer test administered to determine blood alcohol level?

The concern about blood alcohol level stems in part from online court records showing that Cook had a prior arrest record for drinking and driving and marijuana possession in Caroline County.

Cook was charged on September 10, 2010 with driving under the influence of alcohol, for which she received probation before judgment.

A local media account of the arrest said sheriff’s deputies found her blood alcohol level registered at .27, more than three times the legal limit, and that a nearly empty whiskey bottle and a metal smoking device were found in the car. 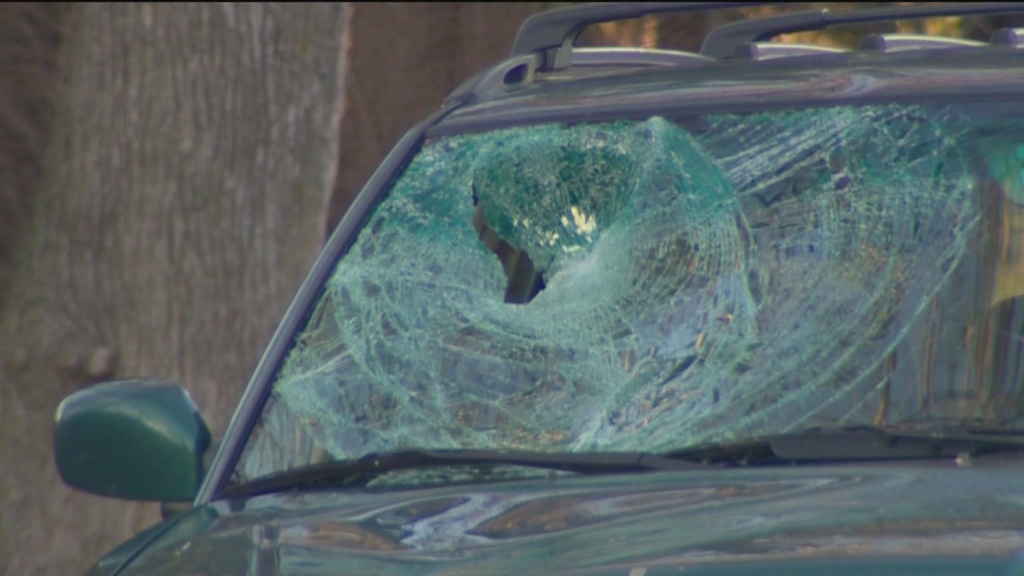 Close-up of the mashed windshield of the car driven by Heather Cook that hit cyclist Tom Palermo. (WBAL TV11)

The charges of possession of marijuana and paraphernalia were dropped. At the time of her arrest, Cook was serving as canon to the ordinary in the Diocese of Easton.

How could Cook have been elected diocesan Suffragan last May (through an elaborate voting process involving multiple candidates) despite her arrest record, The Brew asked Sharon Tillman, spokeswoman for the diocese? Did diocesan officials know of the arrest?

As with the police, the diocese was silent on those questions today.

Cook’s attorney, David Irwin of Towson, also declined comment. Irwin said today he is beginning his research on the case (“I have no written records yet”) and had no substantive comment to offer at the moment.

“My next call is the state’s attorney’s office,” he told The Brew this morning.

Also locked tight and quiet was the gated complex, Elkridge Estates at the north end of Roland Avenue.

Cyclist Moncure Lyon said he had followed the green Subaru there immediately after the crash in hopes of getting the license plate and was told by a security guard to leave.

Lyon posted an account of what happened on the website Bikemore as “Fellow bikerider.” Tonight he confirmed his account in a phone interview with The Brew: 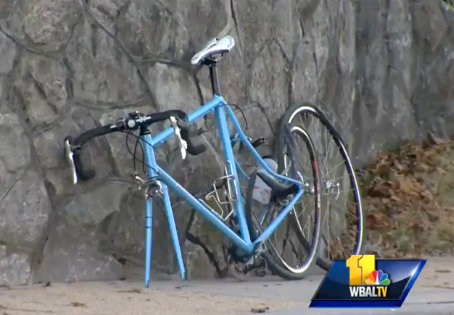 “I was one of the first to arrive at the incident – returning from a ride up Lake ave and onto Roland. Calls were immediately made to 911.

“I checked Mr. Palermo several times for a pulse and to check breathing – to no avail. Remained at the scene until it was secured by the police and walked my bike across the median strip to thank one of the gentlemen who was early at the scene.

“He was in a conversation with another biker and they immediately indicated that they believe the car that hit Mr. Palermo had just driven past. They had the make and model, but not the license.

“I Caught the Car at the Light”

“Immediately I rode in the direction they had indicated and I caught the car at the light at Lake [Avenue]. There was no question in my mind after viewing the damaged windshield that this was the car.

“I asked the driver if she was all right as the light changed and she drove straight ahead down the road that dead ends at Elkridge Estates, a gated apartment complex with a gatehouse guard and swinging gates to stop traffic in and out.

“I was able to get the first four numbers of the plate and immediately went after her. I was stopped by the guard and indicated that there had been a potentially fatal hit-and-run and I believed the car with the smashed windshield was involved and needed to find it. A postal service delivery man assisted me with directions and he also helped.

“In attempting to ride down the apt. road closest to the gatehouse I was stopped by the security guard who said I could not be riding in the complex and that the car has just left the complex. She had not stopped the car nor gotten the license number so I rode back up the hill to the light at Lake and saw the driver talking to a policeman. I rode up to them and, without anything else to say, thanked her for returning to the scene.”