A mighty river of biking comrades today flowed along the Baltimore street where cyclist Thomas Palermo was hit and killed by a car last Saturday, in a memorial ride meant to honor his memory and show support for safer biking.

More than 700 people signed up for the ride and vigil, but organizers estimated as many as 1,500 participated in the chilly New Year’s Day show of support, some of them wearing signs that said “Cyclists’ Lives Matter” and “Justice for Tom.”

“I just came today to honor a fellow biker,” said Jeff Dudley, of Guilford, adhering at first to organizers’ wishes to keep the focus of the event on Palermo, not the unusual circumstances of his death.

But with Episcopal Bishop Heather Elizabeth Cook named as the driver – and clergy officials confirming that she drove off after the crash and so far no charges filed – the case has ignited worldwide attention and intense local debate. 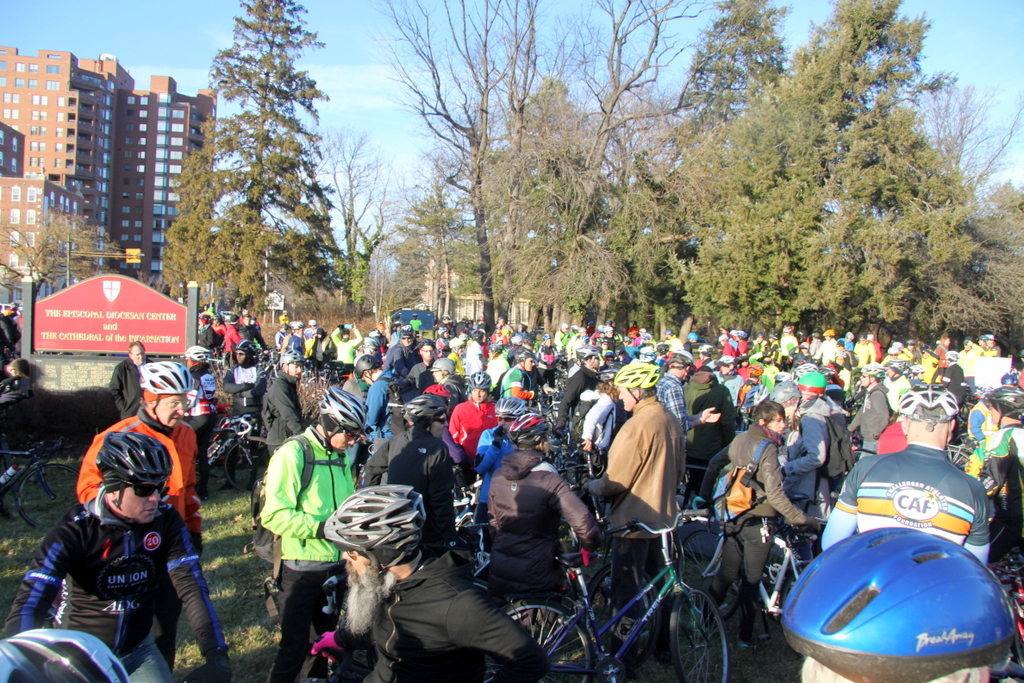 Dudley couldn’t help but go there. “It would be nice to know the truth of what happened. It’s really what’s going to keep people safer,” he said.

“She just left him to die and they don’t charge her?” added Jim Barrett, of Towson, who was biking together with Dudley. “It’s like his life meant nothing.”

But the event itself spoke more loudly today, a symbolic action in part aimed at giving members of the Episcopal Diocese of Maryland a chance to visibly reach out to Palermo’s family, friends and bike community supporters.

And so, the ride began near the Cathedral of the Incarnation, in the parking area beside the headquarters of the diocese at the intersection of University Parkway and North Charles Street.

Clergy and laity, many holding lighted candles, stood outside of the Episcopal churches along the route, which wound up University to Roland Avenue and ended at the crash site in the 5700 block. 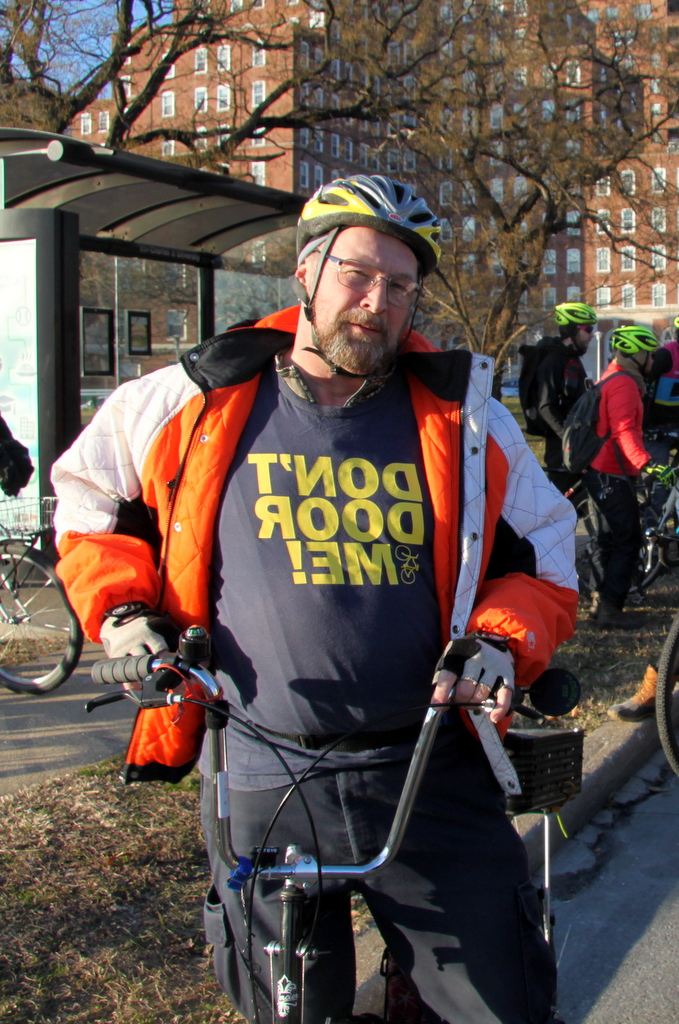 “I came from Baltimore County, I’m Episcopal and I came down here because don’t like the idea that someone in my church behaved like this, leaving the scene,” said Ellyn Westerfield. “It’s not how I was raised, it’s not something I understand.”

The northbound route of the memorial ride had for most of the way a well-marked bike lane, as does the southbound side, where Palermo was riding on Saturday.

But with so many cyclists, the group spread out across the roadway, moving without incident despite the lack of a police escort.

The absence of police angered one participant, Jonathan Fishman. “Pathetic! It’s emblematic of the lack of respect for cyclists. There should be police at the intersections stopping traffic!” he said. “Where are the police? Where is the mayor?” 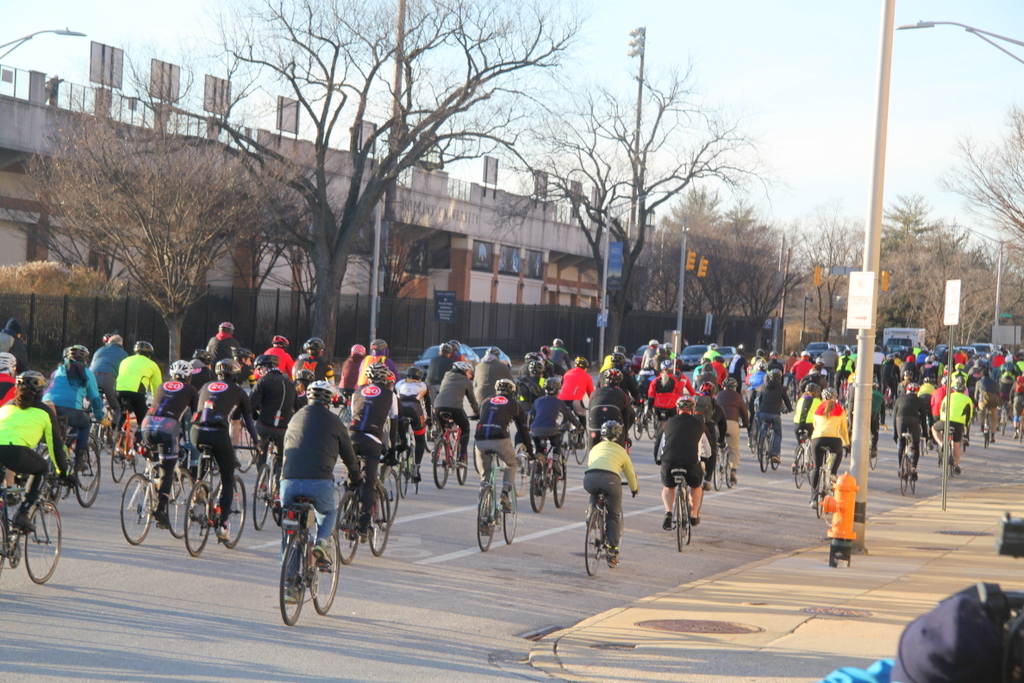 The vigil pretty much “took the lane” as it headed up University Parkway. (Photo by Fern Shen)

“Today is for Tom”

Jed Weeks, of Bikemore, said organizers had not asked for police escort and were fine with conducting it themselves. (Some cruisers showed up at the end of the vigil.)

Fishman was right about one thing though. For such a high-profile event, the gathering was strikingly devoid of politicians or city officials, save for Laurie Feinberg, assistant director of the Department of Planning, and Dana Petersen Moore, a liquor board commissioner. Also in the crowd but staying in the background were City Councilwoman Mary Pat Clarke, outgoing city state’s attorney Gregg L. Bernstein and Baltimore County Councilman David Marks, organizers said.

Weeks and Greg Hinchliffe, of Bikemore, and Nate Evans, of Bike Maryland, orchestrated the event which included some brief remarks.

“A lot of us are feeling upset,” said Evans, addressing a sea of bikers that stretched across the roadway to the median. “We’ll have a time for justice. But right now, today is for Tom.”

One way Palermo was being remembered was the presence of the custom-made bike frames he built, ridden by family-members and customers.

Palermo’s brother-in-law, Jeff Hulting, spoke about Tom’s love of biking, but noted that, with two small children, a full-time job and a side business, he had little time for it.

“Last Saturday was a beautiful day and Rachel [Palermo’s wife], realizing how busy they had been, suggested to Tom that he do what he loved and and go out for a ride,” Hulting said. 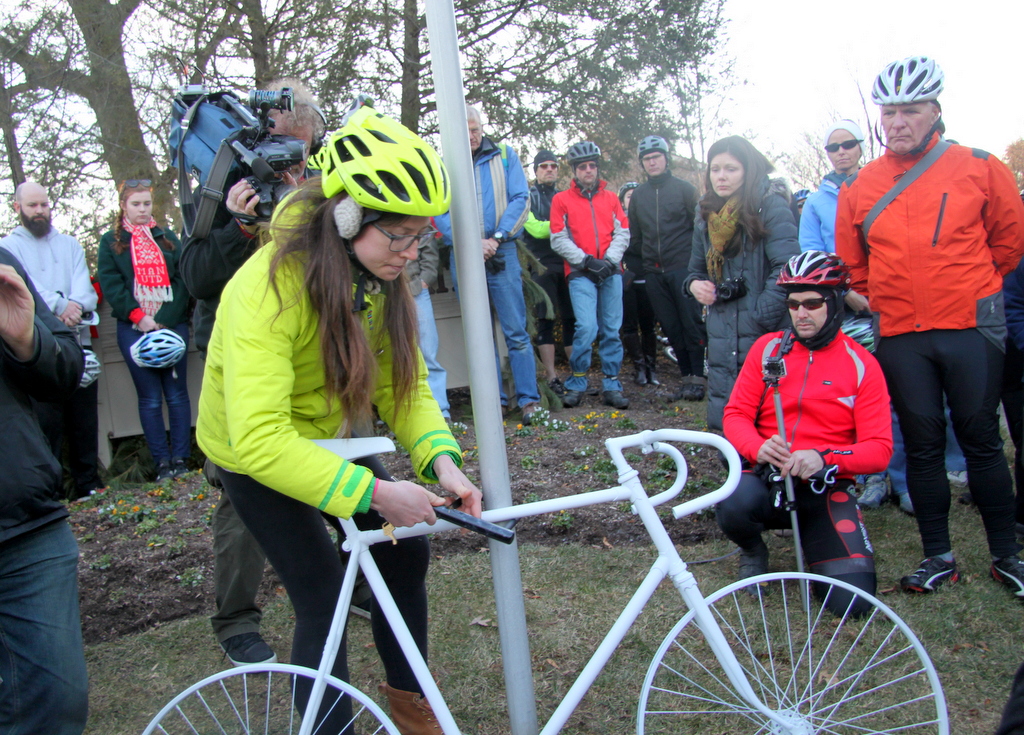 A “ghost bike” is chained to a pole to mark the spot where cyclist Tom Palermo was struck by a car and killed. (Photo by Fern Shen)

“As tragic as this accident was and the grief that our family feels, it is our hope that the awareness caused by this horrible event will ultimately result in the saving tens, if not hundreds, of cyclists’ lives in the future,” Hulting said.

As the white-painted “ghost bike” was chained to a pole, family members embraced, overcome.

It’s the second ghost bike to be placed along the route of today’s ride. In February 2011, Johns Hopkins University student Nathan Krasnopoler was fatally injured when an elderly driver turned right, into his path, as he rode in the University Parkway bike lane. Today’s ride passed by Krasnopoler’s ghost bike, near the West 39th Street intersection.

Not all the clergy at today’s vigil were tight-lipped.

Mark Parker of the Breath of God Lutheran Church in Highlandtown said he sold his car and gets around with a bike and by using transit.

“I thought it was important to remember Tom and show him some respect and some honor,” he said, “and to be reflective of the important needs of the cycling community.”

Parker said he understands the strong feelings about the fact that Cook left the scene of the crash. “It certainly goes against everything we think is important and good as human beings, not to mention standards we hold ourselves to as part of the church community.”

“We’d all like to think we’d do the right thing. But sometimes we fail when the moment comes upon us. And I think that’s what happened here.” 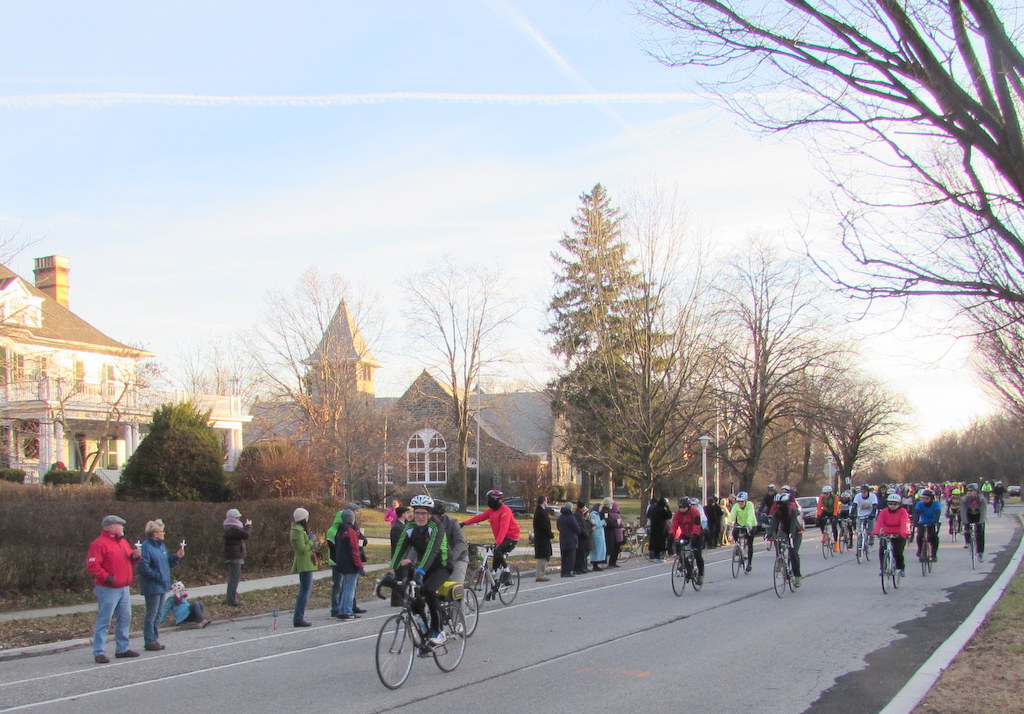 People stood along the ride route holding candles, as the bikes went by. (Photo by Fern Shen) 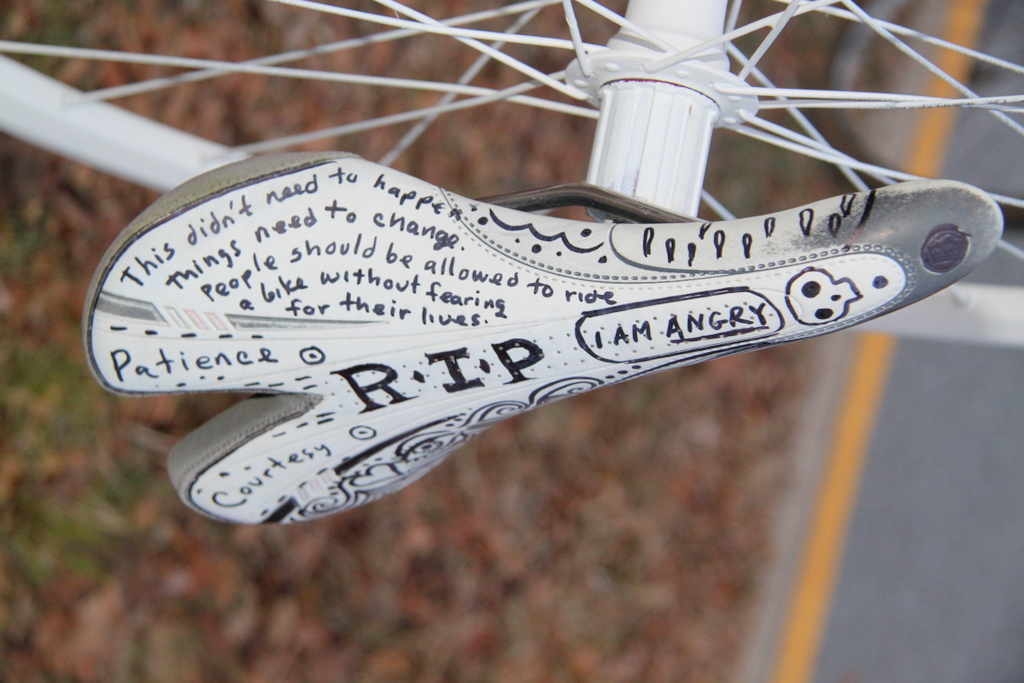 This bike-seat memorial to Palermo was in the median. (Photo by Fern Shen)