A measure to guarantee some parking protection for Hampden residents against a Rotunda project that’s sure to add to the popular neighborhood’s already-tight parking situation?

Or a “vicious” and “punitive” piece of legislation, crafted “out of xenophobia” and destined to worsen the parking problem for visitors and residents alike?

These competing views of a proposal to create a Residential Permit Parking (RPP) zone in Hampden have made the bill coming before the Baltimore City Council tonight one of the most contentious in months.

Under the provisions of Council Bill 14-0397, introduced by Councilwoman Mary Pat Clarke, residents in parts of North Hampden would have to purchase permits or visitor passes from the Baltimore City Parking Authority.

The areas included were originally bounded by Roland, Chestnut and Elm avenues and 37th and 38th streets, but the zone  has since been amended. [SEE BELOW FOR UPDATED INFO FROM MPC] 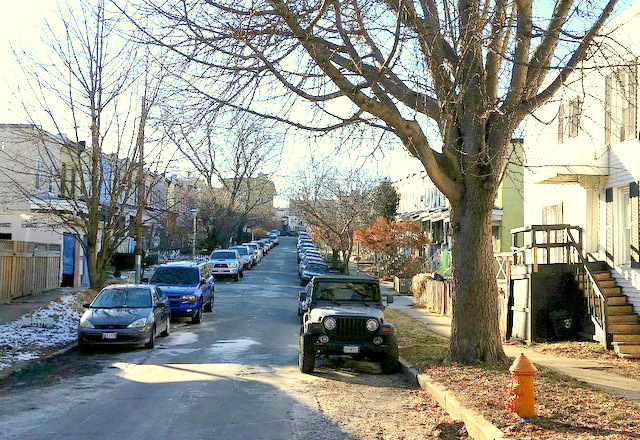 The 800 block of Union Avenue would also be covered by the parking permit plan. (Photo by Mark Reutter)

Cars without stickers would only be allowed to park in these areas for up to one hour per day. The rules would be in effect 24-hours-a-day, seven-days-a-week.

Merchants along “The Avenue” seem overwhelmingly to oppose the plan, predicting that it will mean parking tickets for their customers, as well as added expense for residents in the zone who will have to pay $2o per permit, per car.

“It seems like a veiled forage-for-revenue by a city that more often than not takes a short-sighted approach to fund-raising,” said Deborah Patterson a Hampden resident, owner of 834 on the Avenue and director of ARTblocks.

Debi Matassa, owner of Alchemy on 36th Street, in a comment on the online petition against the Hampden RPP, said:

“I employ 26 people in my restaurant. This RPP will make me lose valuable employees as well as losing customers who already have difficulty parking.”

Why is Clarke persisting in pushing permit parking for Hampden when so many dislike it, calling it – at one-hour – among the strictest RPPs in Baltimore? More than 1,000 signatures are on the anti-RPP petition and two groups, the Hampden Community Council and the Hampden Village Merchants Association, have voted to oppose it.

Clarke said she became convinced that the Rotunda’s neighbors will need protection from parking pressure that will be caused by the development’s 385 new apartments, restaurants, movie theater and shops.

“These row house streets are too densely occupied to sustain such an impact without stronger protections and without incentives for Rotunda apartment residents and shoppers to park onsite,” she said in a statement to The Brew.

Clarke said she knows they’re outnumbered. “Rotunda residents are in the minority in this issue, because there are not many of them,” she said, adding that she supports other measures to help Hampden merchants, such as the valet parking plan under discussion and the idea of a city-built parking garage.

The Rotunda project’s developer, New Jersey-based Hekemian & Co., has not taken an official position on the RPP, but has said the company provided ample parking. One North Hampden resident who supports the RPP has a different view.

“We tried to get the developer to include the cost of parking – there is a parking garage – in the rent, but it will be included for only about 40 apartments,” said the woman, who asked not to be identified. “The rest of the tenants will have to pay to park.”

She said she fears these tenants will try to park in the neighborhood to save money and noted that the community is already dealing with Hopkins Keswick employees who do the same thing.

“I can’t blame them. Hopkins charges their employees to park – the  former tenant didn’t,” she said. She added that spillover from the Avenue shops and restaurants is also a problem,  but that the main concern is a redeveloped Rotunda that she believes is overbuilt for the area.

One council member unlikely to support the bill is Councilman James B. Kraft, who represents the car-clogged 1st District. Kraft famously repealed Canton’s residential parking area 43 (the RPPs are known by their numbers) in 2013 because it did  little to solve the area’s chronic parking problems and struck Cantonites outside the permit area as unfair.

Residential permit parking was so divisive in Canton, Kraft not only got rid of the permit parking area, he issued a moratorium on any new residential parking areas being created for five years. Parking is also a highly charged issue in Councilman Eric T. Costello’s South Baltimore district.

But Hampden, home to some of Baltimore’s most upscale restaurants and shops, is the city neighborhood going through one of those epic parking “moments” now, it seems. 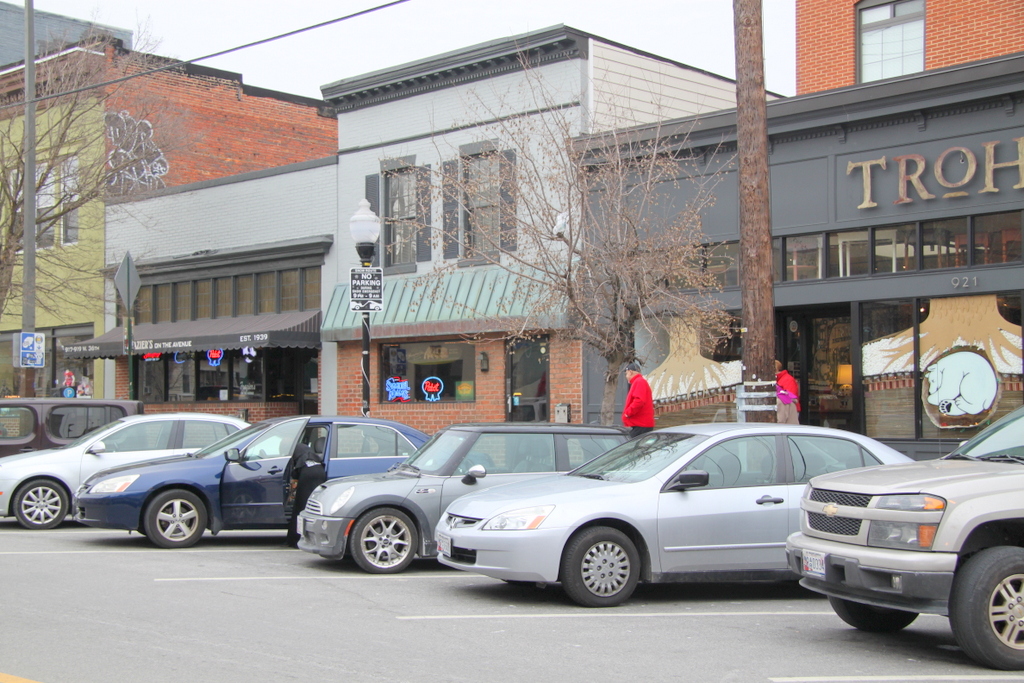 Hampden’s West 36th Street, “The Avenue,” down the hill from the proposed RPP, where parking is at a premium. (Photo by Fern Shen)

As always, the issue makes all the familiar urban tensions flare and inflammatory battle-lines form.

Newcomers vs. longtime residents, renters vs. homeowners, affluent vs. non-affluent, “hipsters” vs. the not-so-hip, drivers who own multiple vehicles vs. pedestrians who bike or walk. Some hope to dial down the rhetoric.

Chrissy Goldberg, a member of the Community Council and the Merchants Association, is a resident who says she understands her neighbors’ parking issues and fears. But the current problems from the Rotunda – construction workers parking in the neighborhood,  she believes – will recede when the project is done, the surface parking spots and garage open up and the construction workers leave.

Goldberg said she respects Clarke, but wishes she’d waited to see if an RPP was needed. 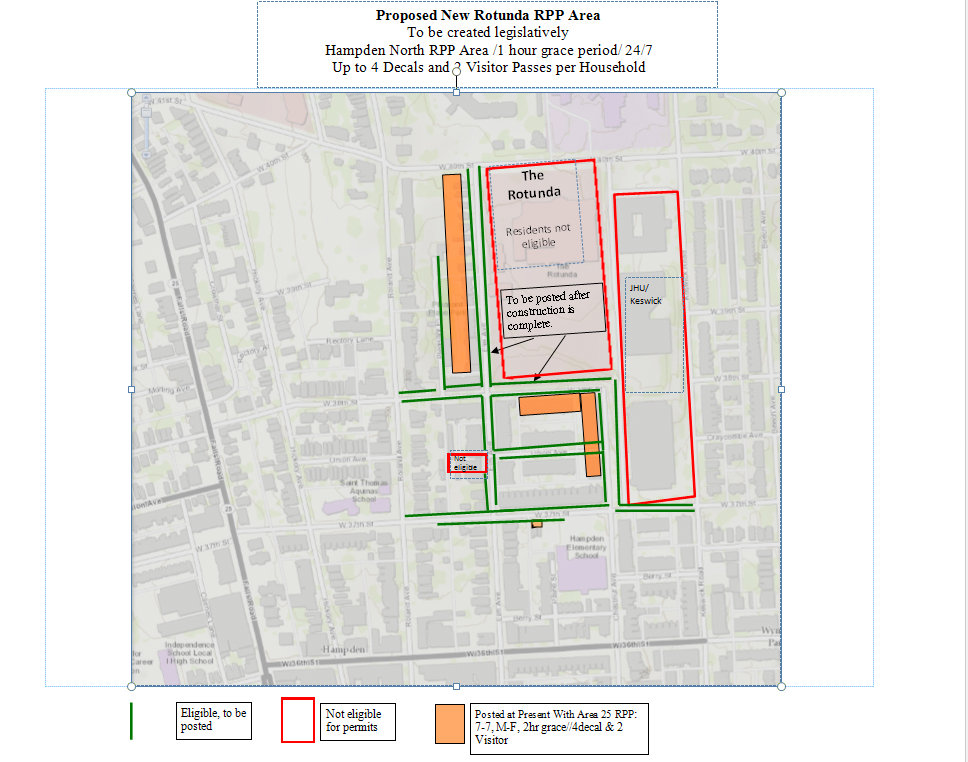 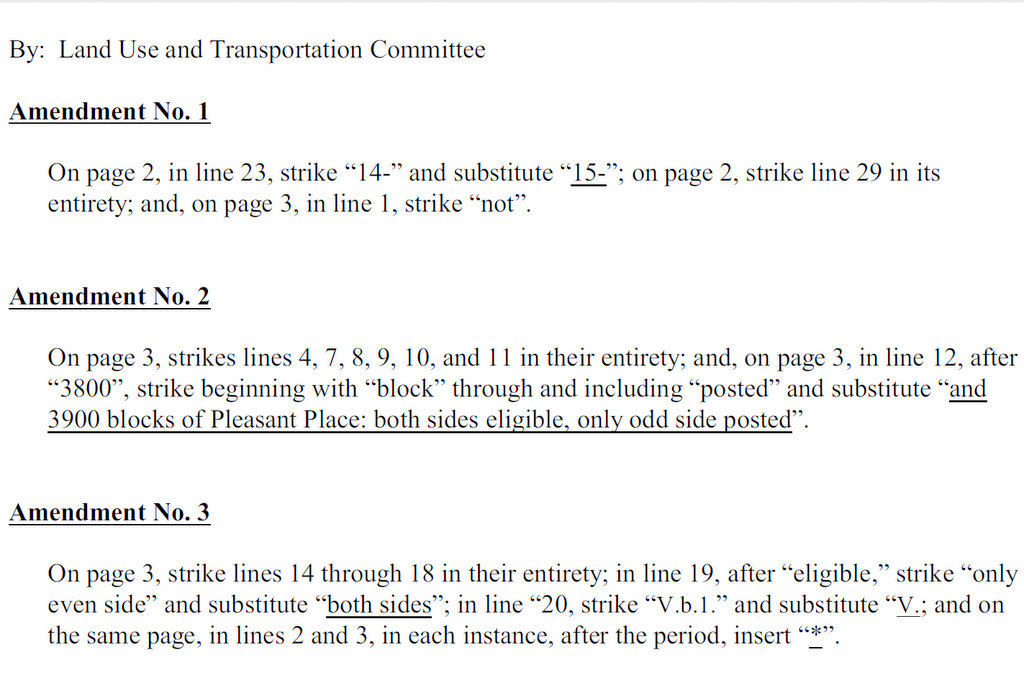 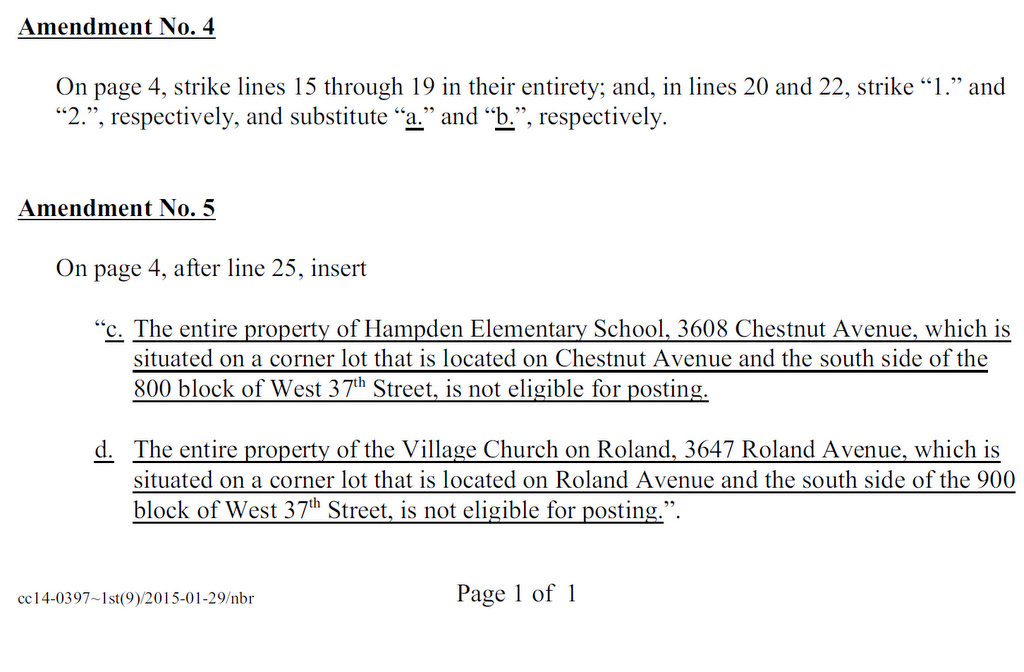