In recent weeks, opponents of a bill to create a new residential permit parking area near the Rotunda have been vocal and visible, with op-eds, an online petition, indignant blog posts and a campaign to lobby the city council.

But last night, as the council gave the measure a key preliminary vote of approval, the residents who live near the Rotunda redevelopment project and asked Councilwoman Mary Pat Clarke to put the bill in were front and center. And very happy.

“This is not anti-visitors or anti-business. Part of Hampden life is visitors. Residents just need a fighting chance,” said Lori Rene, a longtime Hampden resident, speaking with The Brew.

Clarke put the bill in to protect residents like Rene, and Bill Sampson who say Rotunda expansion, including the addition of nearly 400 apartments, threatens their on-street parking. Sampson says he has a bad knee, and prefers to park nearby if possible, because he can’t walk a few extra blocks comfortably.

He says he doesn’t want to obtain a handicapped parking permit or space “because it would be unfair to my neighbors,” who also fear losing parking to apartment dwellers or visitors to the new mall’s shops and restaurants.

Besides, he adds, “I shouldn’t have to. My family has lived in Hampden for 115 years.”

Clarke characterized the bill as “a modest proposal.”

Indeed the number of streets included in the amended bill has been scaled back substantially by about 50% from when the bill was first introduced. The area covered includes parts of Elm Avenue and 37th and 38th streets.

Clarke made an additional change on the council floor – adding one more hour, so that now, as amended, the bill specifies non-permit-holders would be allowed to park for two hours in the zone.

But the modifications didn’t do much to mollify some critics.

“Of course I’m disappointed that the vote didn’t go our way,” said Chrissy Goldberg, a Hampden resident. “And I’m frustrated that Mary Pat Clarke proposed the amendment to two-hour parking instead of one-hour without presenting it to the community first.”

Spector said outright that she voted to support the bill as a courtesy to Clarke. “I feel compelled to honor my colleague,” she said.

Mosby had come out against the bill last week when it was in committee. Last night he acknowledged that Clarke was doing it for the right reasons, for her constituents, but said that the RPP would impact his area and he was “urged by constituents to oppose the bill.” Mosby voted against Clarke’s floor amendment as well.

Costello’s and Kraft’s opposition was not surprising, since both lead districts with severe parking problems.

Goldberg said she was disappointed to hear some council members say they voted out of “courtesy” to a colleague. “It should be about the community, right?” she said.

Will Bauer, who first spoke to The Brew before the hearing, said he was baffled as to why Clarke – who has been in politics in Baltimore for 30 years – would support something that a thousand petition signers, as well as the Hampden Community Council and the Hampden Village Merchants Association, opposed.

“Why is this happening?” he asked. “I grew up on the eastside of Baltimore. Mary Pat Clarke was an inspiration. I love her. If she said jump, I would say how high. But I’m blindsided,” said Bauer, vice president and treasurer of the Hampden Community Council and member of the Hampden Village Merchants Association. 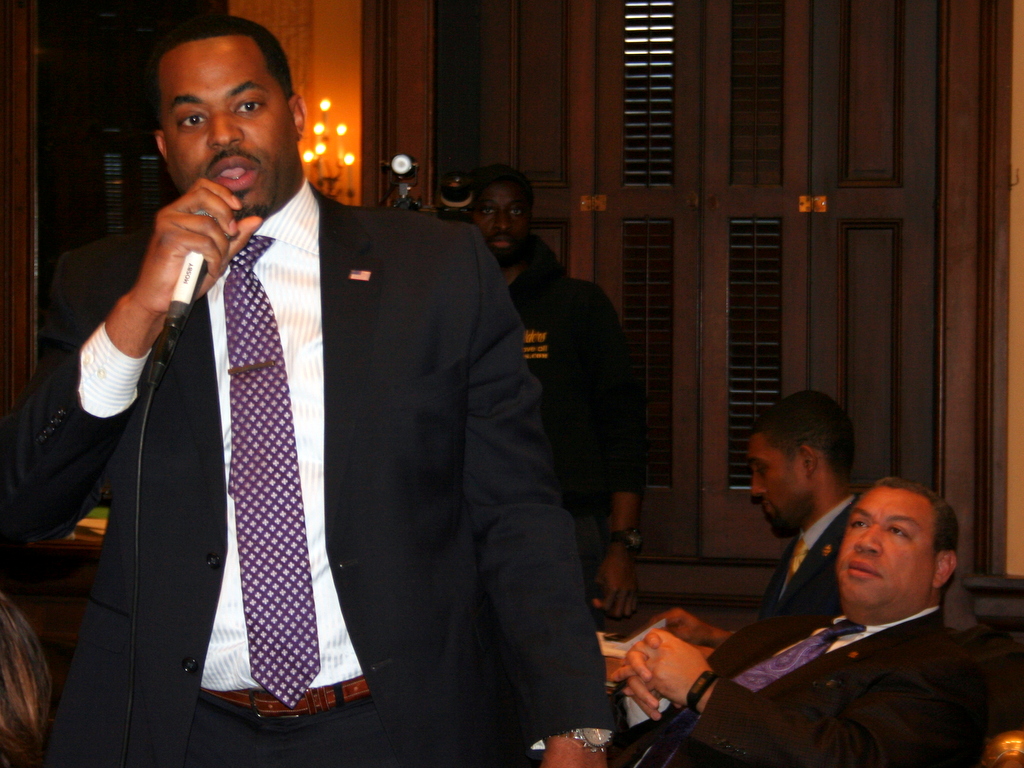 After the vote, Bauer said in an email that he thinks the new parking area will be bad for the community as a whole.

He added that any portrayal of the issue as “business vs. residents,” was unfounded.

Helen Holton was the only council member last night who said the body needed to address the city’s parking shortages.

“Look at the bigger scheme of things,” Holton said. “We need to address the issue comprehensively in Baltimore City. It will continue to come up more and more.”

But Bauer said Hampden is already working on solutions to improve parking for everyone.

Hampden’s joint parking task force, made of up the community council and merchants association, has recently secured a tended parking lot at 37th Street and Chestnut Avenue for evenings and weekends.

There, he said, residents and visitors will be able to park for about $5 for the whole day or evening.