Baltimore school officials are pushing a bill that would allow school police to carry their guns during the school day, but parents and some state lawmakers question the wisdom of bringing weapons into buildings they say should be a haven from dangerous neighborhoods.

“At a time when open and meaningful conversations about excessive and unmonitored police are occurring all over the country, I am appalled that members of the 43rd District would introduce legislation to increase the presence of armed officers in schools,” said city schools parent Melissa Schober, in testimony at a recent hearing on the legislation.

“Baltimore City schools need many things, but I can say with certainty that they do not need armed officers,” Schober said.  43rd District Del. Mary Washington is also strongly opposed to the bill.

“So many of our kids live with gun violence,” Washington said speaking with The Brew by phone. “I would be concerned with the trauma kids might experience [even] seeing that gun.”

A hastily scheduled hearing tonight at school headquarters at 5 p.m. – at the request of the city delegation – will give parents a chance to ask questions about the measure.

The legislation, sponsored by Del. Curt Anderson and Sen. Joan Carter Conway, both representing the 43rd district, would allow the city’s school police officers to carry their weapons inside any school buildings during the school day. 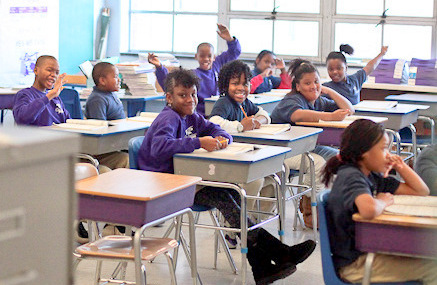 A classroom at City Springs Elementary School..(Photo by Oliver Hulland)

Currently, school police can access their weapons in the case of a threat at any time, but may not carry them routinely on their person during school hours.

Why the legislation (HB101 and SB17) was introduced is unclear to parents and even to other city lawmakers. A rationale for it wasn’t even provided in the bill text. A phone call to Conway and email to Anderson have not been returned.

The bill is part of the school board’s 2015 legislative platform (on file under board documents) however, the platform refers to the bill in the vaguest of terms, as merely an update.

According to Washington, one argument school police officers used at a Feb. 13 bill hearing in Annapolis is that they need more protection – and parity with some other jurisdictions, where armed local police officers can carry their weapons in school buildings.  Baltimore City Public Schools has its own separate police force.

“We asked them, and [city school police] have not made their case as to why they need to carry guns on their person during the school day,” she said. “The current system is working well.”

Washington has asked for the bill to be withdrawn and for school officials to come back with a more “studied approach” to addressing threats.

46th District Del. Brooke Lierman says she’s also still not clear on why the bill was proposed in the first place: “Like you, I am still waiting to hear the reason.”

Not Happy with Process

In an email to The Brew, Lierman, a civil rights lawyer, said the school board should not have scheduled the meeting at 5 p.m. on a weekday, instead of later in the evening or on the weekend when more parents or Annapolis lawmakers could attend.

“I expressed my extreme frustration with the decision to hold this very rushed meeting to the School Board and BCPS’s government relations person last week,” she said. To no avail.

Washington agreed that school officials are not being transparent.

“Community engagement does not have bankers’ hours,” Washington said.  “Notes about this meeting should have been sent home with every student.”

Edie House-Foster, spokeswoman for city schools, defended the process and said that notes are not sent home for these kinds of hearings.

“The normal protocol for this type of hearing is to post to the web site and put the information out through social media,” she said.

The Brew asked school officials a number of questions about school police training and evaluation including:

How are school police officers evaluated?

Are the evaluations a matter of public record?

What data is collected about school policing?

Is the data made public?

On Monday, House-Foster said The Brew’s questions had been forwarded to the school system’s Office of Legal Counsel who will be preparing responses.

Some of those questions were asked earlier by Melissa Schober, whose daughter attends Creative City Public Charter School in Park Heights.

Schober, who works in public health and attended the bill hearing in Annapolis, said its supporters did not anticipate parents turning out at all, let alone in opposition.

“They seemed surprised at our reaction,” she said.

After the hearing, Schober still had a lot of questions for school police and the school board and sent them an email.

About ten days later she received what she considered to be a form letter response from Chief of School Police Marshall Goodwin.

Schober ultimately filed a FOIA request with the school system because she didn’t think she’d get answers any other way. An online petition against the bill already has more than 300 signatures.

Washington said this week she remains strongly opposed to the bill and “absolutely won’t support it.”

“This is a major policy decision. We need to have a serious conversation and focus groups and determine if the evidence says this is the best way,” she said. “What I have seen is the opposite.”

Lierman said she is “frustrated by the insistence of Baltimore City Public Schools on continuing to push this bill.”

“We ought to. . .be focusing on what we can do to ensure that our city schools are adequately funded next year,” Lierman said. “This issue is an unnecessary distraction.”