At a meeting with Fells Point residents, a representative of Harbor Point developer Michael Beatty stressed a timely topic: traffic.

Marco Greenberg, vice president for development at the Beatty Development Group, addressed a gathering of Fells Point residents Wednesday with an update on the project that emphasized what’s being done to mitigate traffic impacts in the Harbor East and Harbor Point areas.

Greenberg talked about the Waterfront Transportation Management Task Force, which he said was preparing strategies to manage the influx of new commuters when the Exelon building opens there in November 2016.

“About three years ago, we started talking with the Waterfront Partnership as well as RK&K Engineers, kind of anticipating what we could do to improve traffic as we add traffic to the network ourselves,” Greenberg said. “We started by taking a large aerial photo and looking at how people were getting in and out of the area.”

Earlier this week, an angry crowd of Fells Point residents unloaded on city transportation officials, accusing them of failing over many years to manage development in the Southeast and allowing traffic there to become horrendous.

Harbor Point and Harbor East were the focus of much of their wrath.

The Task Force (comprised of major Harbor East and Harbor Point employers, city officials and others) has been meeting for about six months to look at traffic impacts from the development, which will include 3 million square feet of office, retail and apartment space. 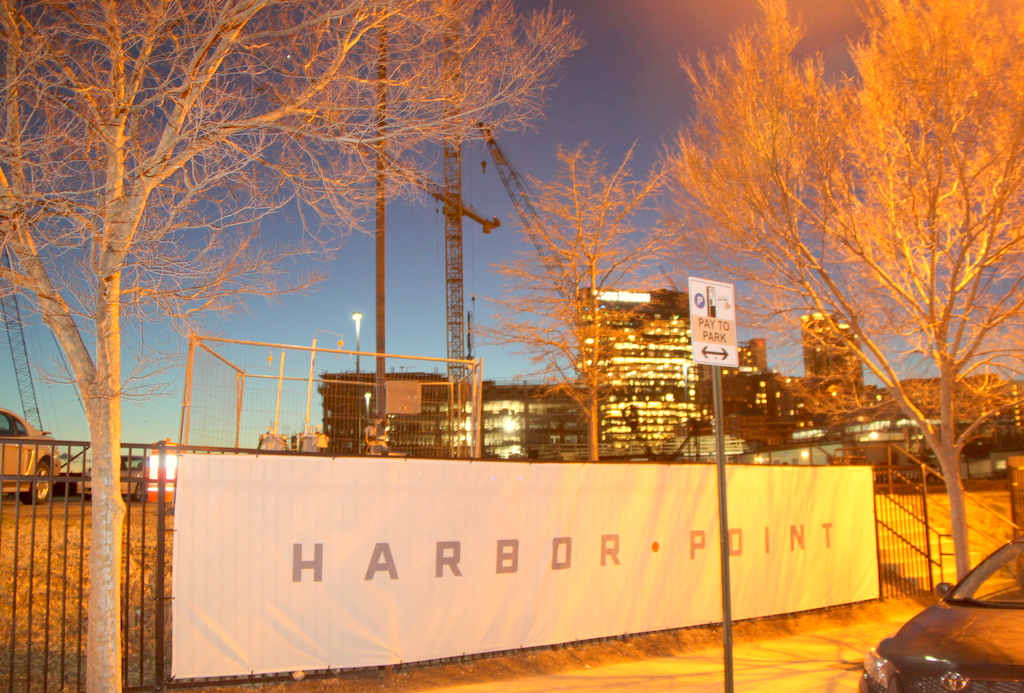 A transportation consulting firm, Whitman, Requardt & Associates, along with Crossroads Transportation, are on the task force as well, Schwartz said, addressing the group.

At the early stages of their discussions about traffic management, Greenberg said his firm focused on traffic flow strategies, such as synchronizing traffic lights and getting traffic enforcement officers.

But as time went on, the emphasis shifted to getting people out of their cars, a key focus of the task force as well, he said.

“People ask what happens to traffic mitigation fees that developers pay,” he told members of the Fells Point Residents Association Wednesday night. (There is also a member of FPRA on the task force.)

“Well, a portion go to this sort of effort where the city is supporting our group by hiring  traffic engineers and having them work with us.”

Many Workers Live in I-95 Corridor

Schwartz said surveys show that while a growing number of Harbor East employees live in the Harbor East area, many more live along the I-95 corridor – in Baltimore and Cecil County communities such as White Marsh or Perryville.

These areas offer few if any direct public transit options to Harbor East/Harbor Point – commuters have little choice but to drive.

Schwartz updated residents on the task force’s plans. The group is now talking with the Maryland Transit Administration about new commuter buses that would serve Harbor East/Harbor Point employees – and possibly a larger area to include Johns Hopkins medical campuses.

Another option they are investigating, said Schwartz in a follow up email, is “shuttle buses running from parking lots – especially from areas where I-95 ‘empties’ into the city, in Canton and in Locust Point.”

A survey of Harbor East-area employers, she added, is going out next week.

“We’re trying to get a baseline, to see what our options are,” she said.

“One major option is getting more public transit. But another is trying to influence [commuters’] behavior.”

Employers and employees are very engaged, judging by 40-50% survey response rate: “I think it has struck a nerve.”

The task force expects to have some strategies to share with Fells Point-area residents in the fall, she said